The Long Punt From Australia to Arkadelphia 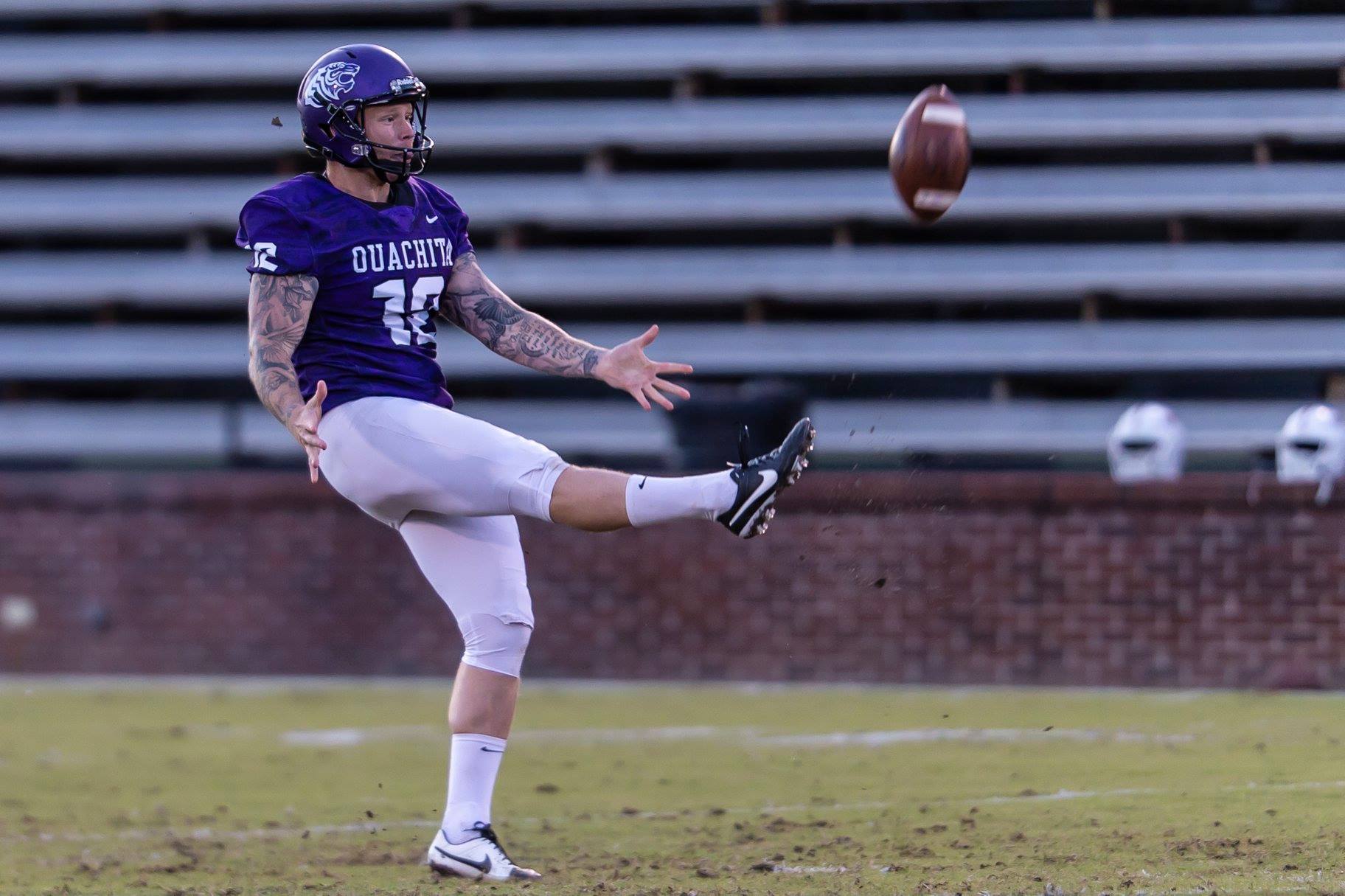 Jake Ford, a graduated punter from Ouachita Baptist University, knew he wanted to pursue sports his entire life. Growing up in his hometown of Shepparton, Australia, Ford knew the ins and outs of Australian rules football like the back of his hand. And after suffering from an injury, the punter thought he was out of the game. It wasn’t until Ford was introduced to Prokick Australia that he realized his time on the gridiron wasn’t over yet.

“I just heard of this academy, Prokick Australia. So, I went down, and they taught me American football,” Ford tells AY About You. “I didn’t really think it would turn into anything at first.”

Developed in 2007, Prokick Australia serves to help guide and transition Australian athletes into playing on the college and NFL levels in the United States. Open by invitation only, the program teaches primarily punting technique but also coaches other positions, such as placekicking and punt returning. In addition, Prokick Australia prepares its players to move to the U.S. by teaching them the cultural nuances they would encounter once playing in America.

“Most have never been to the U.S. when they get there,” Nathan Chapman, head punting coach for Prokick Australia, told CNN. “We teach them what it’s like at college. What the other schools are, what the rules are, having girlfriends there, the police systems, the cultural things in the North and the South, saying ‘yes ma’am.’”

Ford explains that Prokick Australia takes notice of each athlete throughout their time in the program. Once they complete the training and are ready to begin performing in the U.S., the academy matches them with a university that it believes would be the best fit, both for the school and the player. Because of the trusting relationships the organization has established with many collegiate coaches in the States, oftentimes coaches only see the Australian athlete’s film before signing them on the team and welcoming them to practice.

After six months in the program, Ford’s first placement was as a placekicker and punter for the University of Oregon, where he was on the team one season.

“They put you somewhere where you’re going to fit best based on what your goals are academically and professionally,” Ford says. He had been placed at Oregon due to his transferrable classes and his desire to study sports medicine. “They also place you based on what they think your potential is. If a guy has a really big kick and they think he’s going to go to the next level, they often try to put those players in the SEC or Big Ten or Power Five conference.”

After a stint in Oregon, Ford returned home and prepared for his transfer to the Division 2, Ouachita Baptist University (OBU). Located in Arkadelphia, the private Baptist university is home to the 2019 Great American Conference (GAC) championship team as well as 2019 GAC Coach of the Year, head coach Todd Knight. Last season was the Tigers’ third undefeated regular season and fourth NCAA playoff berth, as well as Knight’s third consecutive season to be named GAC Coach of the Year.

During his two years at OBU, Ford donned the No. 12 jersey and punted for the Tigers, helping lead the team through two undefeated regular seasons.

“Ouachita’s morals and ethics as a school, but also on the field, aligned with mine,” Ford says. “That’s why I stayed.”

Ford recalls his journey from Shepparton to small-town Arkansas as interesting, flying into Dallas and then taking a train into the station in Arkadelphia. The punter was picked up by OBU coaches, who at the time were meeting the team’s very first Prokick Australia member.

“Jake’s experience with playing rugby and training with Pro Kick Australia has given him professional type training and a toughness that makes him special on and off the field,” Coach Todd Knight says. “Jake has shown great leadership and desire to be the best at what he does. The biggest advantage in his being a part of Pro Kick is the work ethic that he brings to college football special teams. No one outworks him.”