The Many Facets of Mark Zweig 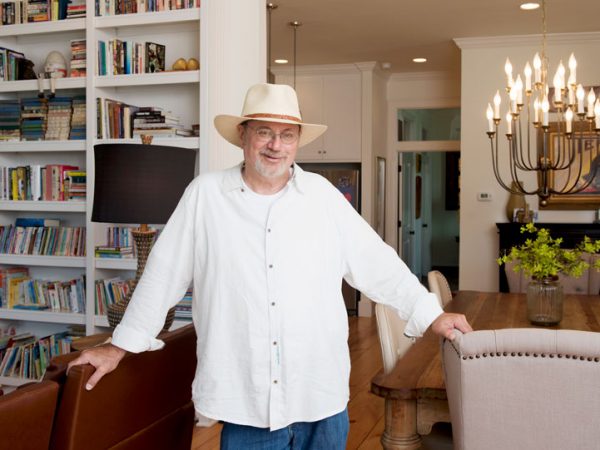 [dropcap]F[/dropcap]orget a room with a view. Mark Zweig’s entire home offers a spectacular vista of Fayetteville’s western skyline. Sitting atop a hill in the Summit Place subdivision, the home overlooks bustling North College Avenue. The three-story home’s exterior is a combination of gray lap siding, white trim and cedar shingles that blend into the wooded neighborhood. 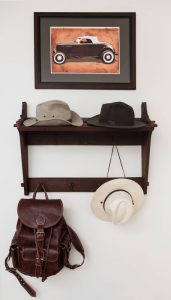 “My style is really influenced by trying to build quality buildings that look like they should be part of the landscape,” Zweig says. “I don’t like buildings that jump out and say, ‘Look at me. I’m completely different than everything else. I’m out of context.’”

The entrepreneur has been renovating and building houses in the Fayetteville area for more than a decade.

In 2005, the Northwest Arkansas transplant created Mark Zweig, Inc., a company that creates “unique, large public art projects in the form of residential architecture.” This particular piece of art serves as Zweig’s personal abode and includes an exterior clock, which can easily be seen by passersby.

“It just sort of identifies the house of being something unique,” he says.

The designer is fascinated by time and likes the look of clocks on a building.

Zweig also enjoys signs, so one that reads “Clock House” in gold lettering has been installed above his garage door.

This home was originally built as a spec house, but Zweig moved in following his divorce. Although he hadn’t intended to live here, he enjoys the place because it’s one he designed from the ground up.

Zweig describes his home as a gable-entry townhouse whose design was inspired by Victorian era workers’ cottages. The interior design uses a warm, off-white color scheme with white trim that the owner says reminds him of vanilla ice cream. Zweig says while it may seem unimaginative, it makes decorating easy. 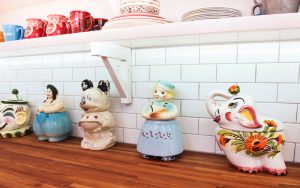 “That makes it really nice then to just throw your art and your rugs and furniture in here and anything looks good in this kind of environment,” he says.

Colorful paintings hanging on the walls really pop against the white background. Some of the art pieces are his own, including an illustration of a hot dog that hangs over the kitchen sink between rows of white cabinets. A collection of cookie jars is displayed atop his cherry butcher-block countertops. Brightly colored mugs and dinnerware are stacked on white shelves above the jars.

“The open shelving is something I really like because it gives me a place to put the sort of weird junk that I tend to accumulate,” Zweig says.

More shelving along the entry stairway provides a convenient location for framed family photos. Much of the flooring throughout the house is composed of blue spruce. The wood is full of knots and lacks tongue and groove edges, which Zweig says adds character.

“That was one of the things that kind of gave it that farmhouse feel and makes it feel like an old house,” he says.

Another attribute creating a sense of maturity is the addition of transom windows over doorways. Coupled with a plethora of others windows throughout the house, Zweig has designed a dwelling space with lots of natural light, which he likes. Overall, Zweig feels like he has created a quiet, pleasant environment in which to live. 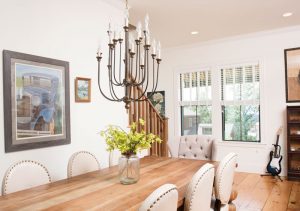 Zweig enjoys the open space and windows throughout the home, which allows a lot of natural light to shine inside.

Living in different regions of the country has undoubtedly influenced Mark Zweig’s style. After growing up in Kirkwood, Missouri, he earned a Bachelor of Science in Organizational Behavior and an MBA from Southern Illinois University Carbondale. He went on to reside in St. Louis, Memphis, Boston and the Dallas-Fort Worth area.

Perhaps the most significant place to impact his designs, Zweig says, was Boston, where he lived for more than 16 years. He says that area has a lot of great historic buildings and some of his favorite architecture in the country is there.

While living in Massachusetts, Zweig was given the opportunity to teach entrepreneurship at the Sam M. Walton College of Business at the University of Arkansas.

“Entrepreneurship’s a great subject,” he says. “You can really change people’s lives for the better.”

Initially, Zweig flew from Boston to Fayetteville once a week to teach his course. Zweig’s ex-wife had family in the area, so in 2004 he sold his business and they moved from New England to Northwest Arkansas.

The people, climate, topography and entrepreneurial spirit of the region are all reasons Zweig has stayed and made Fayetteville his adopted home. He says he’s found the people here to be very nice and welcoming of outsiders, more so than other places he’s lived. Zweig says it’s very easy to have a feeling of community here.

“It’s a very, very friendly place really, very easy to feel at home in,” he says. “So that’s why I’m here.” 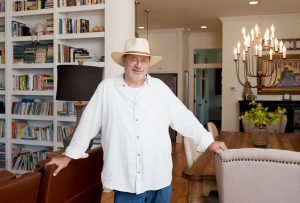 Mark Zweig is a firm believer in hard work. He is the founder and chairman of Zweig Group, which recently collaborated with him to release Zweig American Ale — a beer that defines his strong entrepreneurial character.

Mark Zweig sees himself as a creative person and an entrepreneur. The region has been a good fit for him because it’s allowed his entrepreneurial spirit to flourish. In addition to creating Mark Zweig, Inc., he is also the founder of Zweig Group, a management consulting, publishing, media and training firm dedicated to serving the architecture, engineering, and environmental consulting industries.

The latter company was formerly known as ZweigWhite, the business he sold in 2004. He came back to the company in 2010 and renamed it Zweig Group in 2014. Both of Zweig’s current businesses have been part of the Inc. 5000 List of America’s Fastest-Growing Companies.

Being the owner of two businesses means he has lots of experience to draw from when teaching his students. Zweig says a common misconception for entrepreneurs is that you have to do something completely new.

He says you can work in an industry where there’s demand, you just have to do something a little bit better than your competitors.

Zweig credits dedication to well-constructed, energy-efficient homes to his company’s success during the recession. He said they did well because they weren’t building the same thing as everyone else.

Zweig sees his role in the community as contributing to its improvement. Part of that includes teaching students skills that will be useful regardless of whether or not they start their own business.

“The other part of my role is just trying to create good buildings that people can live in, work in, that enhance the overall environment and hopefully set a standard that other people will then use to elevate their standards or ideas about what we can do,” he says.

Over the last decade, Zweig and his projects have woven themselves into the fabric of Fayetteville. He says he’s always felt welcomed and appreciated here and has no intention of leaving.

“I’ve been living here now for 13 or 14 years and it definitely feels like home,” he says. “I don’t think I’ll ever live anywhere else at this point in my life.” 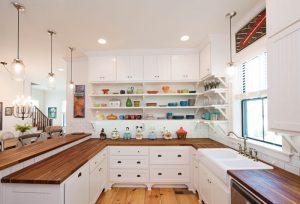 The open all-white shelves are displayed on top of the all-white walls and cabinets. Zweig added pops of color with his many bowls, dishes and cookie jars displayed.