‘The Moment You’ve Been Waiting For’ 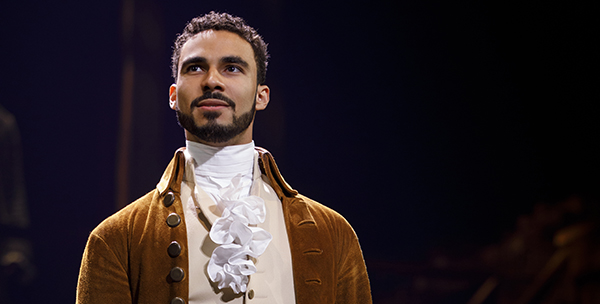 Hamilton Debuts in Arkansas This Month

In retrospect, writing a rap musical about founding father Alexander Hamilton seems like a blindingly obvious recipe for success.

Success stories often appear destined, as if they have sprung fully formed from the minds of their creators. Hamilton has had no shortage of successes since the musical debuted, and that has made the show seem unstoppable.

But like the historical character it depicts, the musical has humble origins that managed to transcend its beginnings and tap into something greater.

Lin-Manuel Miranda created Hamilton, fusing elements of musical theater, hip-hop, dancehall and rap, with the story of the first U.S. Secretary of Treasury after reading Ron Chernow’s biography of Hamilton. Originally, the project was developed as a concept album, rather than a musical. 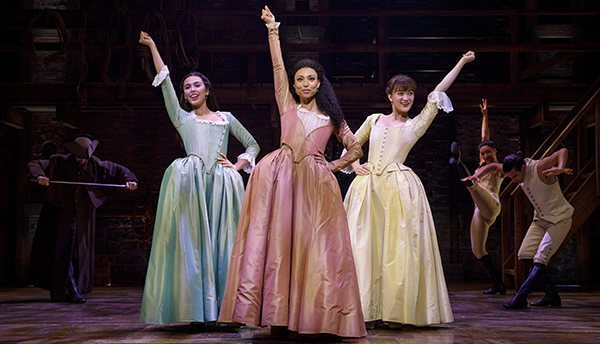 According to the book Hamilton: The Revolution, Miranda told a White House audience in 2009, “I’m actually working on a hip-hop album — a concept album — about the life of someone who embodies hip-hop … Treasury Secretary Alexander Hamilton.” This concept album evolved into the musical, which would eventually find its way to the Public Theater in New York City, and later make its Broadway debut at the Richard Rodgers Theatre.

After inspiring zealous adulation, setting box office records and winning an untold number of awards — including 11 Tony Awards, a Grammy Award for Best Musical Theater Album, and even a Pulitzer Prize for Drama — Hamilton has been cemented as the Broadway success story of the last decade, if not the 21st century to date.

This success, though, was hardly a guarantee. The idea alone — making a musical about the first Treasury Secretary — was an artistic gamble.

Even some who helped propel Hamilton to its stratospheric success questioned the concept at first. Daveed Diggs, who won a Tony Award for originating the roles of Marquis de Lafayette and Thomas Jefferson, admitted that he thought the idea for Hamilton was “terrible.” Until he heard the music.

Audiences and critics have agreed, making Hamilton a popular and critical success since its inception. The musical, its album and a stage film have become massive successes that have reinvigorated musical theater and introduced new generations and audiences to the art.

Now, Hamilton is touring around the United States and the world, and soon, it will be coming to Arkansas for the first time.

The Broadway smash was expected to make its way to Arkansas during the 2020-21 season. However, the COVID-19 pandemic forced theaters around the world to shut down, delaying its arrival.

Now, Hamilton is making its long-awaited bow at the Robinson Center, in Little Rock, this month. Musical theater fans can enjoy a two-week stay of the popular show, which will be performed evenings on Tuesday-Friday, and have matinee and evening shows on Saturday and Sunday.

Whether it’s your first time to watch Hamilton on stage or your fifth, the show offers a dazzling spectacle of choreography, moving lyrics and the emotional journey of a young man who helps forge the future of a young nation Spanning roughly 30 years, Hamilton chronicles the early days of the United States of America, from the rising tide of the Revolution, to the desperate early years of the Revolutionary War, to the birth pangs of the new government and the tensions that arise between the founders. 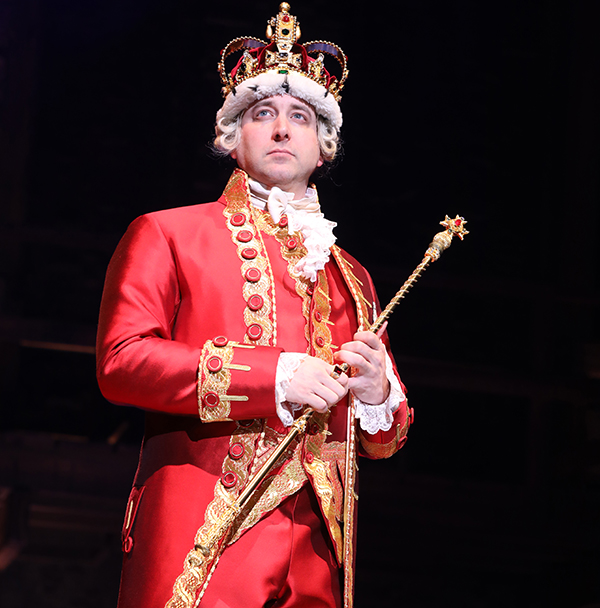 Split into two acts, the musical tells the story of Hamilton’s rise and fall in America during the American Revolution and the early years of the young nation that is formed in the Revolution’s aftermath.

Stepping onto the docks in New York Harbor as an immigrant from the Caribbean, Hamilton sets out to “take his shot,” to make a difference. With a “top-notch brain,” serious writing skills and out-sized ambition, Hamilton rises from his lowly origins to become Gen. George Washington’s aide during the Revolutionary War, a noted lawyer and the first Treasury Secretary, laying the groundwork for the nation’s financial system.

In the first act, Hamilton is the outsider who must rise to the top. With the help of a few friends, Hamilton becomes a player in the Revolution. The first act establishes his major relationships — Washington; the Schuyler sisters, including his wife Eliza and her sister Angelica; and his one-time friend and later rival, Aaron Burr. 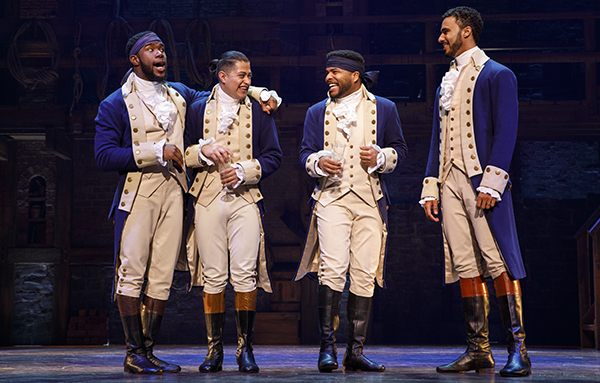 The second act zooms forward past the American Revolution — the former colonies have won the war and must now get down to the dirty business of governing themselves. (“Winning was easy, young man. Governing’s harder,” Washington tells Hamilton during the musical.)

No longer an outsider, Hamilton is now a cabinet secretary and Washington’s “right-hand man.” But trouble looms as new rivals surround him and he struggles to navigate the politics of the new nation.

Hamilton is not just the story of Alexander Hamilton; its tapestry of narratives includes a wide range of historical characters who helped shepherd the United States into being. These characters are given new life by Miranda’s lyrics and music in a way that gives modern audiences new insight into their thoughts and actions. 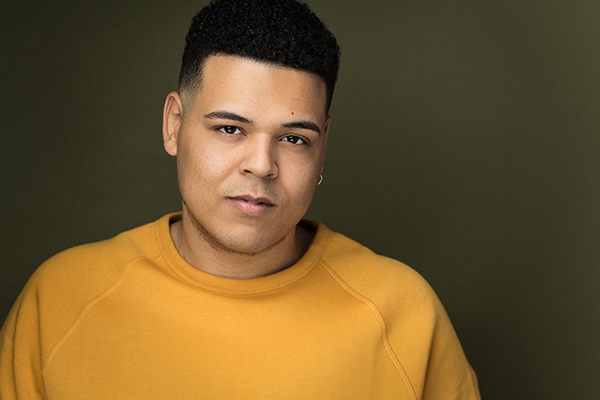 One of the members of the Angelica cast is Tyler Belo, who is playing the dual roles of Hercules Mulligan and James Madison.

Mulligan, a tailor-turned-spy for the revolutionary cause, is one of Hamilton’s early friends who appears in the first act. A brash young man who brags about his “potency,” Mulligan stands in stark contrast to Madison, the frail statesman who is a key ally to Thomas Jefferson and a rival to Hamilton and his fiscal policies during the second act.

A Long Island native, Belo is a recent college graduate, coming to the Angelica cast from Five Towns College. Belo auditioned for the show during his senior year, nabbing the role and starting a whirlwind national tour — until the pandemic struck.

The Hamilton national tour was forced to take a break as theaters on Broadway and around the world closed in response to the novel coronavirus. It was a gut punch for Belo, who described it as “surreal” to see theater and performing virtually vanish during the early period of the pandemic. “I really, really missed it,” he says. “It can go away — I never thought it could, but it can.”

With the show back on the road, Belo is motivated to bring Mulligan/Madison to life for audiences. The dual role is perhaps the most overlooked of the performances in Hamilton, requiring the performer to embody two vastly different physicalities and mannerisms in each act. It’s a performance that demands endurance and significant skill from actors on a daily basis. 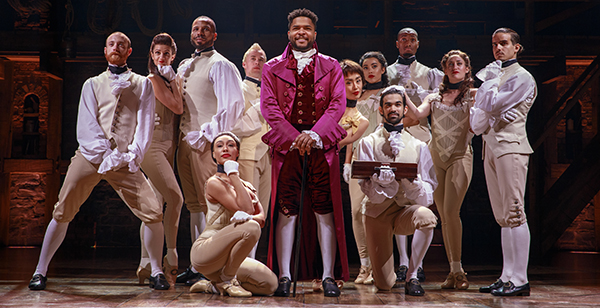 Despite the differences between the two characters, Belo is quick to point out that Mulligan and Madison share one important trait: what they are fighting for. It’s how they go about achieving their goals that sets them apart, he says. “These men are both revolutionaries. Madison is a little more sneaky, and Hercules is more genuine and upfront.”

Performing in Hamilton, to Belo, is not just a gig, but something bigger. For him, getting the opportunity to be in Hamilton is a responsibility to ensure that the audience feels seen, no matter their background.

“I think when we do the show, we represent what America can be, what America is,” Belo says. “You’ll see everybody up there. … There’s something for everybody in our show.”

That’s not to say that he’s not having fun on stage, though. Belo’s favorite song to perform is “Yorktown,” with its explosive entrance for Mulligan. A close second is “My Shot,” which he likens to a cannon shot for the audience. “‘My Shot’ is right out of the cannon. It sets up the world of the show,” he says. Other favorites include “What’d I Miss,” which he has a small part in as Madison, and Eliza’s heart-rending solo song, “Burn.”

Toward the end of the musical, Hamilton describes America as a “great unfinished symphony” that he “wrote some notes” for and that will be sung by others. Through this musical, America is finally singing for Alexander Hamilton and the many other unheralded figures who helped lift the fledgling nation up.

But more than a history lesson, the musical is a celebration of where we have been, where we are and where we are going as a nation. As Hamilton, the man, shows, we have all the capacity for creation and revolution, as well as the capacity for destruction. The choices that we make individually and collectively will determine how the American project continues.

It’s a musical about revolution and hope, told with a sense of optimism about the future of America. For young and old audiences — and all those in between — it’s an intoxicating experience to see Hamilton on-stage and in-person to witness this outpouring of talent and emotion.

Don’t throw away your shot to see one of the great modern musicals right here in Arkansas. Book your tickets to Hamilton today to see history in action.

Hamilton will show at the Robinson Performance Hall in Little Rock from Feb. 8-20.