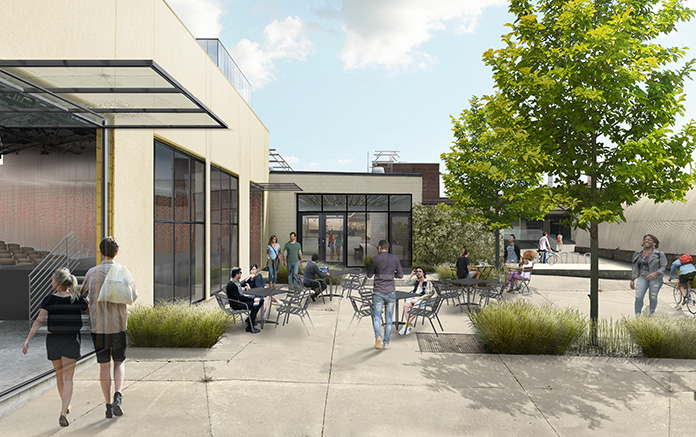 By Caleb Talley | Renderings courtesy of Crystal Bridges
Crystal Bridges Museum of American Art is breathing new life into a building that’s sat vacant for years.
The former Kraft Foods plant in Bentonville closed its doors in 2013, after operating for over 65 years creating cheeses. By 2020, the factory will be back in the business of creating. But instead of cheese, the old plant will create living, contemporary art.
The facility, first announced in 2016, will be called The Momentary and will focus on visual, performance and culinary discovery. Once complete, the facility will also include studio space for resident artists, restaurant space, a rooftop bar and green space for outdoor concerts and events. 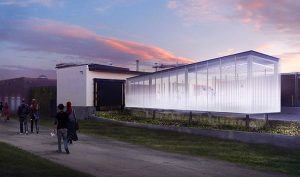 The Momentary, an extension of Crystal Bridges inside a former Kraft Foods plant, is on schedule to open in 2020.

“While Crystal Bridges provides that deep historical context in a museum setting, The Momentary will have a much more experimental feel,” says Crystal Bridges Executive Director Rod Bigelow. “It encourages visitors to interact and get engaged in different ways, to have those conversations about the art making project process, all toward the goal of extending the story of American art through today, in our moment.”
Olivia Walton, wife of Tom Walton, echoed Bigelow’s sentiment during a mid-September press event held at the 8th Street Market, which sits across a field from The Momentary. “When we got to brainstorming what we thought The Momentary would be, we started to talk about what a 21st Century arts space would be like… If a traditional museum puts something up on a pedestal in a vault-like environment, then we want The Momentary to be a more experiential place.
We want it to be a dynamic, unexpected place. Every time you go, you have a different experience.
“The Walton Family Foundation is supporting this project as part of our work to enhance the quality of life in Northwest Arkansas,” she adds. “We’re all passionate believers in access to art… We all believe that art has the ability to transform people’s lives, transform communities. Alice [Walton] said it best when she said, ‘When you have art, you have imagination. When you have imagination, you have hope.’” 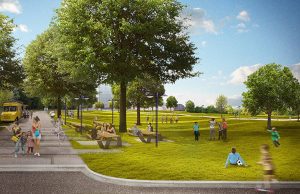 The Waltons tapped international artistic coordinator Lieven Bertels, a native of Belgium, to lead The Momentary when completed. Bertels previously served as the artistic coordinator of the Holland Festival in Amsterdam and as festival director of the Sydney Festival in Australia. Bertels hit the ground running in fall of 2017.
One of Bertels’ first moves as director was to ensure that pieces of the region’s heritage were incorporated into the ongoing project.
“We want to embrace our history,” he says. “Before this was a dairy plant, it was an apple orchard, and it had been since the time Arkansas was formed as a state in the 1830s. Before that, it was Osage Nation hunting grounds. They came from portions of Oklahoma to hunt on this ground for half of the year. We want to reflect all those layers of history. In thinking of that, we wanted to acknowledge that this was once indigenous land. Very importantly, we thought it would be good to commission our first piece of artwork for The Momentary from a Native American artist.”
According to Bertels, the first piece of art commissioned for The Momentary would come from Native American artist Addie Roanhorse, a member of the Osage Nation. Her arrow-like designs, which mirror the art of finger weaving practiced by Roanhorse’s ancestors for centuries, will run along the facility’s glass façade. 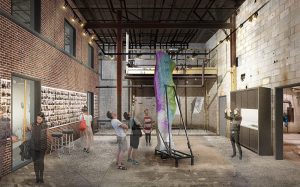 “This was once my ancestor’s territory,” says Roanhorse. “We are full of tradition, and there’s one tradition called finger weaving… I took the design to its most simple form, working with the architects. The whole process has been very natural. It’s been such a good collaboration.”
Bertels adds, “All of the new elements in The Momentary will have a very different design language from the existing buildings. They will consist of steel and glass, and on that glass, you’ll see the abstraction of [Roanhorse’s] pattern… We’re thrilled with this design and it’s been thrilling to learn more about the Osage Nation traditions and to be able to incorporate them, making a 360-degree connection in this way.”
Also revealed during the September press event was the new logo for The Momentary. The logo depicts an ‘M’ made of three arrows – two pointing up and one pointing down. The arrows in the logo reflect the arrows in Roanhorse’s design, the arrows of Osage tradition and the arrows found throughout the industrial plant. 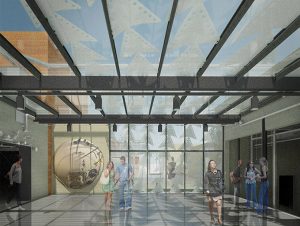 According to officials, the design phase of the project has been completed on schedule, and the construction phase has begun. The Momentary is on schedule to open in 2020, thanks in part to a $2 million donation by Walmart, which will help ensure all of its offerings are free to the public.
Crystal Bridges, Bertels and the Waltons hope The Momentary will serve as a hub for discovery and inspiration in the Northwest Arkansas community for years to come.
“A recent study found that art in the Northwest Arkansas region had an economic impact of $131 million in 2017,” says Tom Walton. “It’s a real thing. The foundation is behind it. The family is behind it. It’s something that will put a flag in the ground in this region, long term.”
RELATED: Delta Through the Decades Deux