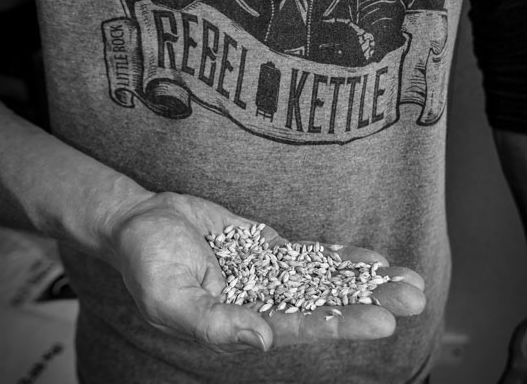 You barley, I mean, barely need to leave the state for quality craft beer these days.

Breweries and distilleries are cropping up all over Arkansas, eager to make us proud with year round beers with names paying homage with a wink to some of our state’s icons ­— Razor Bock, Arkansas Red, Onyx Coffee Stout, Pinnacle IPA and Quapaw Quarter Porter.

And, thanks to the Arkansas Department of Parks and Tourism, we even have an official Brewery Trail. Whether you’re in Little Rock, Fayetteville or somewhere in between, grab your buds and hop over to a local tasting room– they’re bound to be brewing something good.

Check out these Natural State Breweries.

In addition to beer, Apple Blossom Brewing Company offers a full bar and wine list, along with special cocktails designed by its bartenders and owners. Cody Johnson is the brewing company’s executive pastry chef and provides fresh baked bread in-house every day.

The mascot of the Core Brewing & Distilling Company is a wiener dog named Barney. If that isn’t enough to get you to Springdale, one of its year-round brews will be. Year round beers include Behemoth Pilsner, Leg Hound Lager, Arkansas Red, ESB, Easy Livin’ IPA, Hilltop IPA, Oatmeal Stout and Barney’s Imperial Red.

Diamond Bear was founded in 2000 with the mission of “providing Arkansas and the region with a beer of their own.” You can find these six beers on tap year round: Pale Ale, Southern Blonde, Presidential IPA, Two Term Imperial IPA, Paradise Porter and Dogtown.

Named after a “favorite fossil laden cove nestled on the shores of Beaver Lake,” Fossil Cove Brewing Company offers eleven beers on tap at any given time. Year round beers include Paleo Ale and Le Brea Brown. Its tasting room also offers one-offs and experimentals.

In November 2014 Julie Sill reopened the brewery formerly known as the Ozark Brewing Company and renamed it Hog Haus (pronounced House) Brewing Company. This brewery’s claim to fame is that it boasts to be the “only place in NW Arkansas to buy beer on Sunday.”

The Ozark Beer Company takes pride in its place in the Ozarks and strives to “make beer that brings neighbors together, and that all people lucky enough to call the Ozarks home can be proud of.” Beers on tap include Onyx Coffee Stout, Cream Stout, Belgian Style Golden Strong, Indian Pale Ale and American Pale Ale.

Prestonrose Farm & Brewing Co. are certified organic farmers that grow heirloom fruits and vegetables, “with a focus on forgotten southern favorites.” “The Beer Farm” offers small batch craft beers, some are even made with hops grown on the farm. 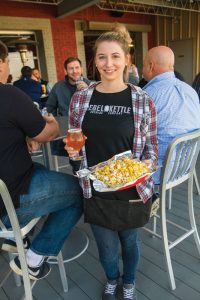 Along with the brewery’s year round beers Working Glass Hero, Moontower, Easy Roller and Dirtbag, Rebel Kettle releases a limited, small batch brew every Thursday afternoon at 4:30. The Rebel Kettle brewery is in a historic building in East Village and has an outdoor beer garden.

Rock Town Distillery prides itself in being the first legal distillery in Arkansas since prohibition. Rock Town calls itself a “true grain-to-glass distillery” as their spirits are distilled from corn, wheat and rye grown within 125 miles of the distillery. 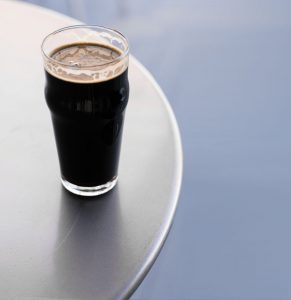 This brewery is the creation of four guys (Theron, Brad, Shawn and Ian) who met through the Central Arkansas Fermenters. The founders at Stone’s Throw say that craft beer is a movement that they’re proud to stand on the frontlines of. Some of their year round brews are Shamus Stout, Sausage Hefeweizen, Common Sense and Deadwood Amber Ale.

The only brewery located inside of a National Park, Superior Bathhouse offers weekly tours of the distillery where visitors can enjoy samples and in-house Gelato. The brewery offers beers unique to Hot Springs, as well as products from neighboring states.

West Mountain Brewing Company is located on the historic Fayetteville Square and features a wide selection of beers. The brewing company serves lunch and dinner, and is family-friendly!

It must be spring: it’s almost time for the annual Hot Springs Craft Beer Festival! This year’s event is scheduled for Saturday, May 20th, from 4pm to 8pm at the Hot Springs Farmers & Artisans Market Plaza.

The very first Hot Springs Craft Beer Festival was only three years ago but the festival has grown in leaps and bounds. Last year’s event was supposed to attract upwards of 650 people. More than 1,000 showed! And why not?

The Hot Springs Craft Beer Festival is like a who’s who of craft breweries, all under one roof.

The festival includes a section of offering brewing supplies and unique, local items such as artisan chocolates and craft cheeses. Food from some of Hot Springs’ finest restaurants will be available for purchase during the event. There will also be live music to keep you up on your feet and grooving.

This year also sees the return of the 5B5K, also known as the “Five Beer Five K”. This unique event involves running a kilometer, drinking a beer, running another kilometer, and so on until the prerequisite number of kilometers and beers (5) have been met. Great fun, very popular.

Details for this year’s Hot Springs Craft Beer Festival are a mite scant at this time. You can keep an eye on the details as they emerge by visiting the hscraftbeerfest.com site or following them on the beer festival Facebook page.

Whenever you’re in the Hot Springs area – or any where in Arkansas, for that matter – you can bet that, somewhere nearby, there’s a locally owned and operated, Arkansas bed and breakfast inn. Inside, you’ll be treated to a warm, personal service and hospitality you didn’t know you could find anymore. Uncommonly good amenities, advice about the area, and delicious, homemade breakfasts that well get you off to a great start each day. That’s an Arkansas bed and breakfast inn. Why stay anywhere else?