The People Behind Your News: Beth Hunt 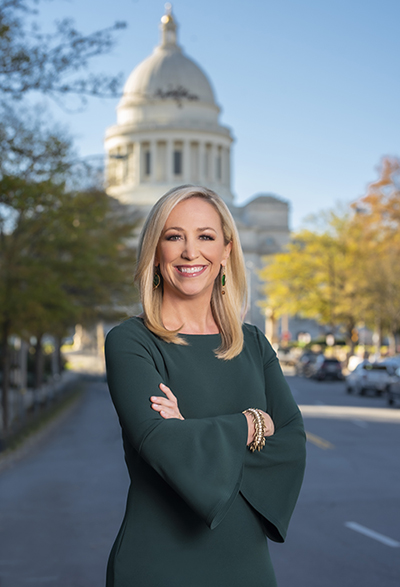 Growing up in Carlisle, Beth Hunt was determined to make sure that the town of 2,500 wasn’t her entire universe. As one of four children of a cattle rancher, who also rode saddle broncs in rodeos, and a teacher, she appreciated her family and small-town life, but she always wanted to move to a bigger city.

The path to doing that became clear during a high school journalism class field trip to Little Rock, where her teacher led Hunt and her fellow students on a tour of KTHV-Channel 11. There, she met longtime local host Beth Ward after she finished that day’s noon news. And she began the road to her own longtime anchor gig at KATV-Channel 7 on the weeknight 6 and 10 p.m. newscasts.

“I wasn’t necessarily a news junkie, and I didn’t know back then that I wanted to do it, but I was always intrigued,” Hunt recalls. “Watching [Ward] live, I was in awe. They let me sit on set and read through the prompter, and I think I instantly knew that I wanted to do this.

“Being from a small town, not many people pursued a career in journalism or broadcasting, so I think they laughed it off, I think that was kind of a driving force to push me to it even more — people saying, ‘You couldn’t do that.’”

Hunt, 43, graduated from Arkansas State University with a degree in radio-television before attending graduate school there and quickly scoring a job at KATV thereafter. She first worked behind the scenes before landing her first reporting gig in Fort Smith/Fayetteville, but 10 months later, she returned to Little Rock as a general assignment reporter in 2002.

She’s had plenty of memorable experiences in her two decades on the Arkansas airwaves, including following Arkansas native Gen. Wesley Clark in his race for the 2004 Democratic presidential nomination. Beyond anchoring live broadcasts from nearly every major festival and event in the state, she particularly remembers covering the aftermath of the 2003 explosion of the space shuttle Columbia and the opening of the Clinton Presidential Library in 2004.

“Columbia broke apart upon re-entry, and everyone on board died,” she recalls. “They sent me down to Nacogdoches, Texas, because people in southwest Arkansas reported seeing it falling and that’s where the pieces were found.

“The Clinton Library opening was so fun, and we did at least a week of coverage, because so much in the city was changing, the whole landscape of downtown. All these people were in town for it, and we had a satellite truck there, and I was standing on top of it recording as they shot there against the Clinton Library. I just shot all day long, and I thought, ‘I can’t believe I’m getting to do this.’”

Hunt and her anchor team at KATV have won an Emmy for Best Newscast in addition to her own Associated Press awards for reporting and several wins in the Arkansas Times annual readers’ poll as Best TV News Person. But perhaps her most exciting moment occurred when she traveled to New York City for a series of stories on Arkansans living in the Big Apple and got a behind-the-scenes tour of Good Morning America — and conducted interviews with Charles Gibson, Robin Roberts and her hero, Diane Sawyer.

“I always loved Diane Sawyer because I thought she had a unique way of storytelling. Just her voice and the way she tells a story as if she’s speaking to you directly,” explains Hunt. “I’ve always enjoyed her in-depth stories. Meeting her was really great.”

Hunt’s routine has been drastically altered this year by the COVID-19 pandemic, as KATV has joined the rest of the broadcast news industry in shifting to socially distanced studios and scheduling. Normally, her day typically kicked off with a 1:30 p.m. news team meeting in which the news team would decide which stories would be covered and by whom, and which elements are needed to make stories complete. That would be followed by copy editing scripts and recording promos for the night’s broadcasts and brief news reports for local radio stations before settling in for her own pre-show hair and makeup.

Now, the staff has their meetings virtually using the Slack app on cellphones, and Hunt and her co-anchor of four years, Chris May, do much of their afternoon recordings remotely. When it’s time to go live, KATV’s large studio facilitates keeping the dynamic duo about 30 feet apart.

“I think it’s important to be able to take dense information and simplify it in a way that the average viewer can understand it,” notes Hunt as she offers her thoughts on what makes a good anchor. “We do that every day, taking a dense topic and extracting the information to give it to people in a way they can understand it. I think also the ability to remain calm in high-stress situations is important. I’m a pretty laid-back person, and I think that plays to my advantage.”

One memorably intense story, occurred when the Power Ultra Lounge nightclub in Little Rock was the location of a mass shooting in July 2017. Twenty-eight people were injured and one was hospitalized in the attack, and Hunt recalls it as one of the darker moments of her tenure. 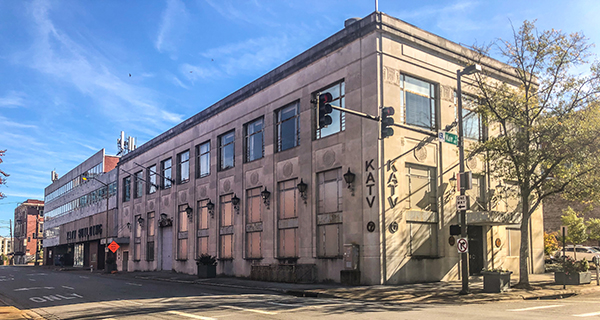 “We went on the air for hours talking about that, trying to figure out what’s going on, who’s the shooter, how did this happen, is everyone OK?” she remembers.

“I also really loved covering politics when I was younger, but not so much these days because it’s so partisan. But election nights are fun because we have national coverage from ABC, and we cut in about local races.”

On a lighter note, Hunt maintains a sense of humor regarding other aspects of the job. She laughs when asked about the Will Ferrell news satire Anchorman, and recalls that KATV rented out a screen at the Riverdale 10 movie theater to show it to the entire station staff when the movie first came out. And she’s not shy about sharing her own funniest on-air moment.

“I’ve laughed on the air a few times because little mistakes I’ve made get me tickled, and I’m the kind of person who laughs very hard and doesn’t stop easily,” Hunt says. “The only major mishap for me was when I was working on one of our morning shows.

“We often had fashion segments, and models were coming in and out. The store was called Elle, and at the beginning of the segment, I said ‘Please welcome the ladies from Hell,’” she continues, laughing again. “I lost it!”

It’s clear that Hunt loves her job, and a large part of what keeps it fun and interesting is her teaming with May, who launched his own career at KATV before anchoring in Boston and Philadelphia and returning to his hometown in 2016.

“When I was in college, Chris was working at Channel 7 so I would see him on TV and go, ‘Wow, he’s really talented.’ You could always tell he was going somewhere,” she recalls. “When I made it up here, I made it known that if he was interested in coming home, it’d be great if we could get him back — not thinking that it could ever happen, but it did.

“It’s really been enjoyable to get to know him, and I consider him a great friend. I think the most interesting part of our show happens during the commercial break. It’s like a group of friends hanging out.”

Outside of her career, Hunt also enjoys her home life with her husband, Brian, an insurance agent, and her three sons. Ultimately, her love of family and friends makes this big-city success story still a small-town girl at heart.

“Our whole world was that town, so we could come to Little Rock to do shopping or whatever,” she says. “But there was high school football on Friday nights, and both sets of my grandparents lived there. I miss it now. I’m still just a mom who’s working hard to keep my family fed and everyone happy.”

READ MORE: Do You Know Your “Enemy?”