The People Behind Your News: Hayden Nix 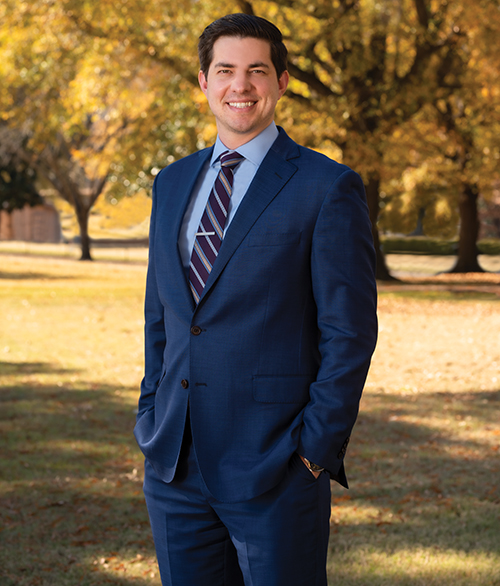 Just as the winds and the rivers shape our ever-changing landscape, Hayden Nix’s life has been molded by the weather. But it wasn’t a fairy tale that led this small-town Arkansas boy down the meteorological pathway — at least not at first. Today, Nix is a self-described “weather nerd,” but as a child, his barometric pressure was altered by fear.

In 2000, long before his arrival as a meteorologist at KARK-Channel 4 and KLRT-Channel 16, a thunderstorm hit his family’s trailer in Kingsland. For as long ago as this fateful evening was, he still remembers it vividly.

“I was asleep and the next thing I know, I wake up to a tree hitting the side of our house where my room was located,” he says. “It absolutely scared me, so the first thing I do as a kid is immediately run to my parents’ room. I didn’t make it there, because my dad actually just swooped me up as he was meeting me in the hallway, and then we immediately went out to the car.”

In an event of serious inclement weather such as this, the Nix family’s plan was to abandon the vulnerable trailer and flee to their nearby church, which had a concrete foundation and sturdier walls and ceilings. There’s also the obvious calming nature of being in a house of God, and there are few better times for that as a remedy than in a time of danger. But as his parents rushedly helped him and his brother into the car, their faiths of escape were swallowed by the wind. The red glow of the brake lights had illuminated an impasse; not only had a tree fallen onto the home, but another was downed on their driveway, blocking the only exit. Instead of riding out the worst storm his young eyes had ever seen from the safety of the church, he was forced to endure the brunt of its force where they sat, exposed.

“We ran back inside and we’re just praying,” Nix recalls. “It was just making all kinds of sounds, and we could feel the trailer shaking.”

To make matters worse, his grandparents lived next door where another tree had fallen into their bedroom. Fortunately, they had already moved on the same idea and were in their parked vehicle, blocked by a similar wooden obstacle.

“After that, I was absolutely terrified of storms,” he says. “I mean, you could have the clouds build up in the sky a distance away, and I would think it’s going to turn into some big, bad storm. … I would immediately turn on the news or whatever local station we had and try to see what was going on.”

These anxieties would continue for the next half-decade, until his uncle purchased him a guide to weather book to aid his trepidation.

“If I saw something, I’d go look it up in the book and read through it and understand what was happening,” Nix says. “So that fear started turning into a fascination and yearning to want to know why storms did what they did.”

But this newfound understanding and interest in weather patterns was but one of the ingredients that prompted his eventual journey. The other, and perhaps the most consequential, is what he describes as his “servant’s heart.” While his hometown church was inaccessible on the night of that momentous storm cell, he was never a stranger to its front doors, always comfortable and at peace in its pews. Because before that weather event spurred the river that would carve the valleys of his mind, his faith in a Creator responsible for everything was already there. And after the storm decimated so much of his family’s property, their little town of only 400 banded together to help, further emboldening Nix’s spiritual beliefs.

“There was no way that my dad would have been able to clean it up on his own,” Nix says. “It felt like half the town was out there helping him. Witnessing that and thinking about how we’re supposed to play our roles as Christians and wanting to spread that faith out there, I wanted to be in a servant’s role.

“I thought, ‘Well, what better way to do that than be a broadcast meteorologist?’ You know the science; you explain it daily. And then whenever we do have these big, significant events, people can turn to you and you’re that voice of reason and trust and respect; they listen to you and know what to do, and feel calm as well whenever you’re walking through any type of situation.”

That hand-in-hand partnership between weather and servitude created a forecast of meteorology for the budding weatherman. And if there was any shred of doubt left, it was all erased when Nix was blessed with an opportunity to job shadow Ned Perme at the KATV-Channel 7 studio in 2005.

“He called the school and called the class I was in and talked to me about trying to come up and meet him. I was a star-struck kid,” Nix remembers. “I went up there and spent a couple of hours with him and kind of looked over everything that he did on a day-to-day basis. I think right then and there, when I was in eighth grade, that pretty much set it into motion. Like, ‘That’s what I’m going to do when I grow up.’”

After graduating from Rison High School in 2010, he took his talents to Mississippi State University where he earned his degree in the subject. During his collegiate career, Nix found himself guided by another KATV personality, interning with meteorologist Todd Yakoubian in 2011 and 2012. 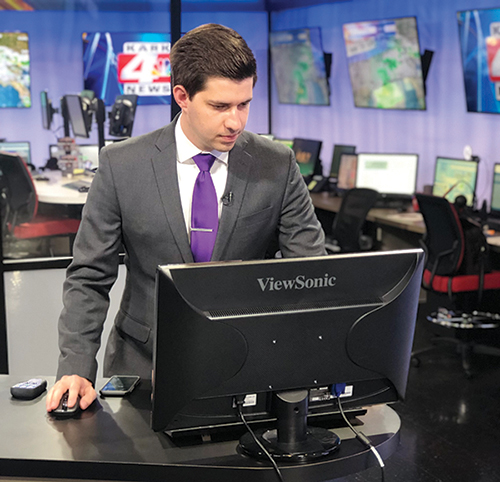 Nix in the KARK studio. (Courtesy)

“Both of us being big weather nerds, we really hit it off,” he says. “[He] helped excite my love for it even more.”

But after his stint in Starkville as a Bulldog, it wasn’t back to Arkansas just yet. His first official gig out of college was as morning meteorologist for KTXS-TV in Abilene, Texas, a city of about 120,000 west of Fort Worth. He’d grown very familiar with the weather patterns of the South through the lenses of Arkansas and Mississippi, but the Lonestar State would prove to be a new and challenging horizon, an opportunity that he relished.

“You’ve heard the saying about Texas, ‘Go big or go home,’” Nix jokes. “They don’t exaggerate with hail on that matter. I have never witnessed as much large hail as I did out there in Abilene.”

Fortunately for Nix (and his hail-battered car), the Natural State called out to him just a few years later. In February 2017, he joined the Arkansas Storm Team of KARK and FOX16, serving primarily as the former’s weekend meteorologist.

But don’t let the “weekend” part of his title’s prefix fool you; the life of a broadcast meteorologist can be quite apt in its turbulence.

On a typical week, Nix is on the clock Saturdays and Sundays from 2 to 11 p.m., and usually logs at least three, all-day digital shifts during the week, reporting on and providing updates to the weather- and science-related news for the online platforms of both news sites.

“If I’m not on that normal schedule, typically what happens is I’ll be filling in for someone,” he explains. “And that could range from me being up at 1 o’clock in the morning to staying up until midnight, depending on if I’m in the early mornings or late at night. And sometimes I can do all three shifts — weekends, weeknights and week mornings — all in one week.”

There are also the impromptu schedule-bending examples of severe weather, when it is typically all hands on deck, no matter what time the proverbial clouds roll in. And, of course, there is also holiday work at times, because the weather doesn’t take a break for stuffing and ham.

During the ongoing pandemic, much of his digital work is conducted from home as the team tries to limit the number of broadcasters in the newsroom at any given time. Nix says Arkansans are fortunate to have avoided many significant weather events over the past nine or so months, for it would have placed him and his colleagues in the position of risking transmission and infection in order to stay on top of and deliver the most up-to-date forecasts and storm tracking in order to keep viewers at home in the know and safe from potential harm.

But even though the enterprise is a worthwhile endeavor for someone as passionate about the craft as Nix, striking the right work-life balance can be difficult, specifically between his two loves: meteorology and his wife, Megan. 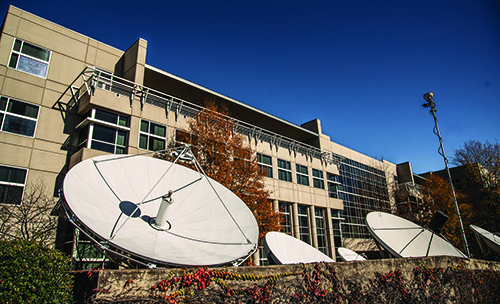 The Victory Building in downtown Little Rock, where KARK and FOX16 operate.

The two were originally best friends at Rison and began dating after each went off to college. They’ve been married for four years, and counting. Megan is a dental hygienist, so their schedules often lie incongruent with one another, but he says they do their best to make it work and spend as much time together as possible — whenever that may be.

“Sometimes, it can be difficult, because working in this business, there are sacrifices that have to be made,” he says. “But I’ve been lucky and very fortunate. I have a very understanding family and wife, and we’ve always been able to work around it. [We] also have an amazing weather team; we’re always considerate of each other and our time and with our families. When it comes to holidays, people are willing to work them to let others off. And so there’s a really nice balance of having that in play, so there’s always time for everyone to be able to spend with their families.”

Together, they spend a lot of that free time in the local food scene, and Nix recently became an avid cyclist, a pastime that he has slowly begun to sell his wife on, as well.

Nix is also enthusiastic about teaching science and meteorology to the next generation of Arkansans, seeking a similar chord to the one that people like Perme struck in him. He loves participating in school talks across the state and has sorely missed those opportunities during this pandemic. He’s found ways around this temporary hindrance, however, devising virtual versions of these lessons through “Weather Fix with Hayden Nix.” He’s also partnered with the Museum of Discovery in Little Rock for at-home, DIY science projects, as well as informative lessons like his “The Science Behind Fireworks” from June.

“People were at home, parents were trying to come up with things to keep the educational juices flowing,” he says. “And we thought this was a perfect opportunity to kind of plug this in, saying, ‘If you’re trying to find some type of science education, come right here and we can help provide that for you.’ … I want to build a database that families and kids can find here locally from local people.”

As for whether or not his studies at Mississippi State overtook his Arkansas spirit, Nix remains diplomatic.

“It’s a house divided, I have to equally share it,” he says behind a laugh. “I cannot say one over the other. I grew up loving the Razorbacks, I fell in love with the Bulldogs; they both have equal weight in my heart.”