The People Behind Your News: Steve Sullivan 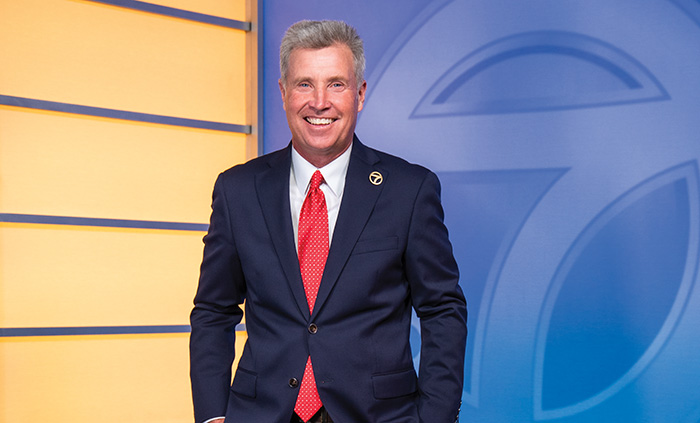 The People Behind Your News: Steve Sullivan

Ask any prominent person for the recipe for his or her success, and you’ll likely hear it is attributed to more or less three things — hard work, good relationships and more than a dash of good luck.

“The best toolbox for me was the people I worked with,” he says. “I never felt like I was the best guy on the set. I had some great mentors, true professionals, and I got to see how they worked. I think the more you’re around good people like that, you take things from them and that helps you.

“I had a couple chances to leave, but things worked out here where I could stay. It was never solely about money; the longer you’re in an area the more ties you get. I’ve basically had my entire professional life here, and I like what I’m doing. I didn’t think going to other stations would really be a more fun job. I have no regrets.”

As for the lucky part, two episodes from Sullivan’s professional life stand out as fateful. The first brought him to Arkansas, to begin with, under the unlikeliest of circumstances.

“A buddy of mine was a trainer at a dog track,” he recalls. “A dog got its muzzle off and got in a fight with another dog, and they were going to get rid of him. To make a long story short, my buddy said he was going to buy it and asked, ‘Do you want to go in half on a greyhound?’ So, I take my college money, and I spend it on a dog named Keentwister.”

This encumbrance forced Sullivan to find an affordable college with a broadcasting program that was close to a dog track. Upon discovering Jonesboro was a mere 60 miles from Southland Park Gaming and Racing, now Southland Casino Racing, in West Memphis, he was off for the Natural State.

“So sight unseen, because I couldn’t afford for my parents to come down with me, I got myself to school, and it was like a new world,” says Sullivan, a native of Framingham, Massachusetts, who grew up a fanatic of everything Boston sports. “It just started there.”

Sullivan’s second stroke of luck came in his first job after graduating from Arkansas State University. Landing a typical rookie gig at a radio and TV station in Fort Smith, his was the FM news and sports report from 4 a.m. to noon. But all that would change, thanks to a big break that should have landed him on the street.

“I did news updates on an 8-track tape where you could put on five newscasts at once,” he says. “But if you messed up when you recorded it, you had to do the whole thing over.

“Now I seldom swear, but I did a newscast one day, and I did all the news updates, and the fifth one I messed up. And I said the F-word over and over. I went back to retape, and the guy following me said, ‘No, I’ll play the first four and do the last one live. It won’t get on.’ 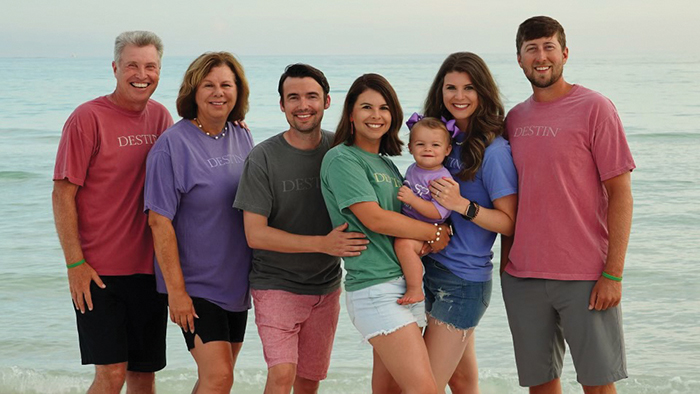 “I got a call the next day; apparently at 4 in the afternoon, the whole thing played on air. He had forgotten about it.”

Sullivan was summoned to an audience with the station owner, fully expecting to be canned. He couldn’t have imagined what would come next.

“I was fortunate enough to have an owner who thought differently,” he says. “If I had another guy that wasn’t like him, I probably would’ve gotten fired. He pretty much got the point across that the mic is always live.”

“He basically said, ‘40 people called in; 39 were just appalled, one person actually liked it, but no one mentioned your name,’” Sullivan chuckles. “He liked me, so he moved me to TV on weekends.”

It’s as tempting as it is cliché to draw a heavy line from Sullivan’s good fortune back to his heritage, but if anyone could exude the so-called Luck of the Irish, it’s only fitting to be he, the son of Emerald Isle immigrants.

“In Ireland, they didn’t play a lot of sports, but Dad was a sports fan,” Sullivan says. “There are six of us kids in the family, and the only one who was eaten up with sports was me. I can remember covering the TV with a towel and entertaining everyone by calling plays. I learned a lot of skills that do you no good later in life, like learning batting averages while my brother learned how to rebuild houses.

“My dad, Mike, worked in a factory all his life, and he said you need to do something you like. He decided I was going to be the next play-by-play guy for the Red Sox.”

Sullivan’s love for televised sports led him to play throughout his growing up, although it was clear early on which side of the mic would his sports career play out. And play out it did; from his gaffe at radio station KFBW, he moved to KHBS-TV while also doing high school gigs on the side. 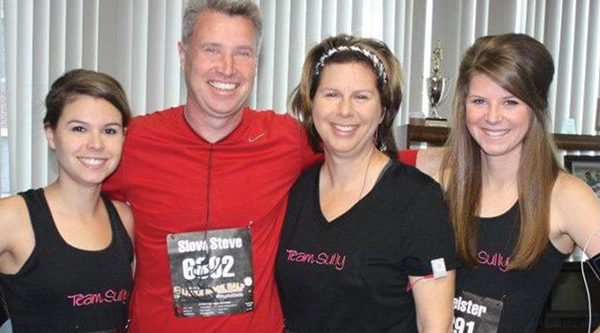 “One of the only play-by-play jobs I was doing at that time was for Fort Smith Christian High School,” Sullivan says. “Their star player was Gus Malzahn; he was a basketball and football star. Then, I did Fort Smith Northside in football and worked with some great people over there as well.”

Sullivan’s move to Little Rock came thanks to Bob Steel, who hired him to KARK-Channel 4 where he’d spend 12 fruitful years. He then moved to KATV-Channel 7, working at the elbow of legendary broadcaster and longtime Hogs play-by-play caller, the late Paul Eells.

“Paul never rushed anything; even if we had a late afternoon interview, he’d do it unrushed. He had no clock,” Sullivan says. “He never worried about a bad show; the reality is, people aren’t hanging on every word, and he prioritized the right things.

“Some people aren’t the same person they are on the air. When I was at Channel 4, he was at Channel 7 and he’d always end saying, ‘Everybody have a great, safe rest of the night.’ I’d think, ‘Does he really mean that or is he just saying that?’ When I got to working with him, I found him to be completely sincere. He really was one of a kind.”

Today, Sullivan looks back on those days as some of the most formative and important to him personally and professionally. Not just because of Eells, although that’s certainly primary, but for all of the people he worked with and who influenced him.

“Your goals change the longer you’ve been in the business,” he says. “Relationships in TV are far more important to me than they were years ago.”

Of course, you don’t stay 30 years in a field as competitive as television unless you’re pretty good yourself, and “Sully,” as he is known to thousands of viewers and colleagues, has proven just that. He’s been recognized with multiple Arkansas Sportscaster of the Year awards and decorated for Best Sportscast by the Associated Press more than a dozen times while at KATV. He also holds the Arkansas Activities Association Distinguished Media Member Award and has been inducted into the Arkansas Sportscasters and Sportswriters Hall of Fame.

And, as any true veteran does, he’s got hours of stories about his time interacting with the state’s sports heroes and legendary coaches.

“I tell you who had kind of an aura about him — Coach [Frank] Broyles was kind of an intimidating figure,” he says. “He was great to me and to work with, but if you were in the room with him, he had that aura, and you didn’t want to screw up.

“Houston Nutt was great; Bielema wasn’t a great coach, but he was entertaining. On the flip side, Bobby Petrino was a disaster; he did not want to talk to you, and he made it clear he saw no use for you.”

Sullivan saves his highest praise for another famous Razorbacks coach whose legacy and image is often misunderstood.

“The all-time best was Nolan Richardson. He was so good,” Sullivan says. “At Channel 7, we had so much great stuff with him, he was open to everything. It was an era where broadcasters and coaches had such a good relationship. He was the last coach where you’d mic him up for the entire locker room, and he didn’t care, he trusted the TV station. I don’t think you’ll see that relationship again. And there will never be another Nolan Richardson.

“It ended ugly, yes, and did he have a chip on his shoulder? I think he had a mountain on his shoulder. But if you saw him on a daily basis, you’d have a great appreciation for him as a man, not just as a coach.”

For all of his success, one goal has eluded him — the play-by-play seat for the Razorbacks. He said he would have loved to have followed Eells into that chair after the former’s untimely death in 2006, but it wasn’t to be. Instead, he’s served in the booth for multiple schools, most notably the University of Central Arkansas (UCA) football team.

“Of course, if you’re in Arkansas, you want to be the voice of the Razorbacks,” he says. “I think I would’ve done a good job, but I don’t have the traditional voice. I don’t think I was considered for that [job], although I got to do a couple of radio games. When Paul was doing football, I’d do basketball.

“Everybody has different likes for their play-by-play guy. Personally, I think passion and being on the action, giving all the details is more important than having a classic voice. It turned out well for me with UCA.”

Today, Sullivan is like any of his peers in TV sports in Arkansas, enjoying the Hogs’ recent success nearly across the board and looking forward to what lies ahead for the school, competing in the nation’s toughest conference.

“We’ve got a great situation now with the coaches up there,” he says. “If you have the right coaches and facilities, you can put together a year like this. Baseball, Dave Van Horn, I have no concerns. Basketball, Eric Musselman seems to be the right guy, with the transfers. This guy’s been doing it since he was at Nevada. He is so far ahead. [Women’s basketball coach] Mike Neighbors told me you don’t want to be the one guy in the room that’s not winning because you stick out. He’s another one that’s so good.”

“[Head football coach Sam] Pittman stunned me; the Razorbacks are far better than I thought we’d be. So, he’s the right guy at the right time, and I’m excited about this upcoming football season.”

It’s been a long time since Steve Sullivan has had to take his cue from others in his career; three decades have cemented him among the elder statesmen of the craft. Yet he still never fails to give credit to the people around him, especially his wife, Toni, and grown daughters, Kayla and Keely, who’ve put up with the missed weekends and holidays that built his career. And, he’s never far from a reminder of the man who set the tone for his lifelong journey.

“I think if my dad didn’t say I’d be the next voice of the Red Sox, I wouldn’t be doing this,” he says. “He worked in a factory all his life, and it was a rotten job. He died at 60, he died young.

“He got to see me do one show on a Friday night, and he couldn’t believe someone could have so much fun doing their job. In this business, it just takes one person to believe in you.”

READ MORE: The People Behind Your News: Wess Moore