The Return of Hawgball: Under Muss, Razorback Basketball Primed to Revisit Past Glory 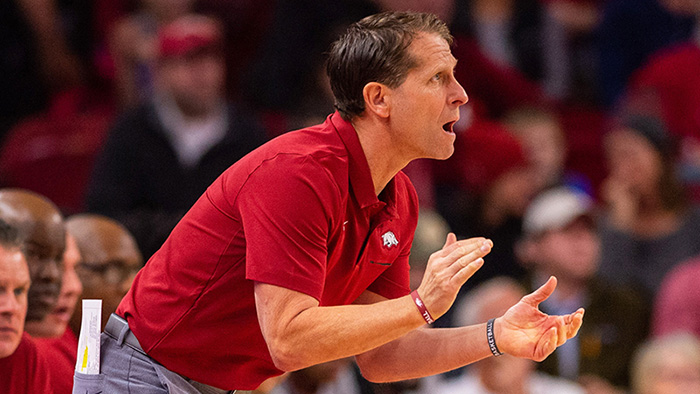 The Return of Hawgball: Under Muss, Razorback Basketball Primed to Revisit Past Glory

Coined in the Nolan days of Arkansas basketball, the term “Hawgball” has become synonymous with prosperity for the Razorbacks, cries of “Hawgball is back, baby!” reverberating through Arkansas households on those sometimes-long winter nights over the past two decades when the Hogs invariably flirted with success — and their fan base would attempt to exhume the spirit of 1994 — but otherwise were mired in mediocrity.

It appears, however, that Hawgball indeed is back. Let that soak in a little more: Arkansas basketball is coming off an Elite 8 run and a top 10 finish; it is ranked 16th in the AP preseason poll, its first preseason ranking since 2007, and Bud Walton Arena, all 19,200 seats of it, is sold out for the entire 2021-22 season. That’s every ticket, for every game. Sold.

Yes, Hawgball is back, baby.

From the get-go, Eric Musselman has been enthusiastic about his fondness for it and his desire to bring it back. Growing up and into his early adulthood, he followed three teams, he’ll tell anyone who asks, as I did back in 2019 at a Little Rock Razorback Club event, not long after his hiring.

“Believe it or not, it was Arkansas, UCLA and UNLV,” he told me. UCLA, because of its pedigree and his connections to Southern California. The Runnin’ Rebs because, well, a lot of folks adopted Tark and his high-flying band of “men” after they arrived on the national scene with a trip to the 1977 Final Four.

And the Hogs? Once Eddie Sutton placed modern Arkansas basketball on the national stage through a 1978 Final Four run and continued success, and Nolan Richardson took that foundation and built a monster, Hawgball was a national brand.

And Musselman jumped at a chance to be a part of it. Though he had a good thing going at Nevada, the chance to guide a high-level Power 5 program with resources, and at which basketball was prioritized, was his logical next step. After all, the son of a college and pro head coach, he almost quite literally had filled every other possible role related to basketball. Arkansas just might represent his chance to finally reach the mountain top.

Entering Year 3 of the Muss Bus tour, Arkansas basketball has returned to the national stage. This resurgence is driven by the coach’s Energizer-bunny work ethic, enthusiasm and complete embrace of the program’s history and traditions.

In just two seasons (one a pandemic-shortened season), Musselman has guided the program back to a status it last enjoyed in the 1990s under Richardson. Twenty wins in year one with a possible/probable NCAA berth awaiting before the tournament was canceled due to COVID and in year two — 25 wins, an SEC second-place finish, a top 10 final ranking and an Elite 8 run that included dramatic wins over Texas Tech and ORU now cemented into Razorback lore.

Musselman, it appears, has fully roused the sleeping giant, now shaking off two decades of slumber. Given his frenetic energy, how could it be anything but fully awakened?

The Hogs, though, lost a lot from last year — 52 points a game and more than a third of all minutes played. One-and-done SEC Freshman of the Year Moses Moody took his 17 points and six rebounds a game to the NBA lottery. Fan favorite and workhorse grad transfer Justin Smith quite simply willed the Hogs to numerous wins, averaging 14 and seven.

(His value to last year’s team is almost immeasurable. With him in the lineup, the Hogs were 24-4. If MVP awards were given to the players who truly were the most valuable to their respective teams, Smith would’ve been the league’s MVP. Instead, he was named a second-team all-SEC selection, a clear snub.)

And de facto point guard Jalen Tate, another senior grad transfer, was one of two Hogs to play every game. He averaged 11 points, four assists and two boards a game and made the NCAA All-South Region team.

Also gone are guard Desi Sills and forward Ethan Henderson to the portal and big man Vance Jackson to graduation, a combined 11 points a game.

Thanks in large part to their work, anticipation for Hawgball is perhaps as high as it’s ever been.

But that anticipation borne of postseason success was only fueled by Musselman’s October signing of two five-star recruits to the 2022 class — Nick Smith, a 6-4 combo guard from North Little Rock, and 6-7 man-child Jordan Walsh from Cedar Hill, Texas. The Hogs beat out bluebloods for their commitments and currently hold the No. 2 class in the 2022 cycle, according to ESPN. It’s the highest-rated class for Arkansas in the roughly 20 years that recruiting classes have been ranked.

Smith is the No. 6 overall player in the country for ’22, and Walsh is No. 7. They join three ESPN 100 four-stars already committed — 6-3 shooting guard Derrian Ford of Magnolia, 6-6 shooting guard Joseph Pinion of Morrilton and 6-6 small forward Barry Dunning of Mobile, Ala.

And as of late October, the Hogs were in the mix to land another five-star in the 2022 class, 6-7 combo guard Anthony Black of Duncanville, Texas.

Hog fans couldn’t have asked for a better coach to navigate the dawning of the transfer portal, but Musselman is proving his chops as a traditional recruiter as well. The portal, however, indeed will help propel the ’20-21 Hogs and complement a solid returning foundation.

Returning for the team that gave eventual national champion Baylor its closest game of the tourney (and the only one to play the Bears within 10 points) are 6-4 sophomore guard Devo Davis, 6-2 senior guard JD Notae, 6-10 sophomore forward/post Jaylin Williams and 7-3 junior forward/post Connor Vanover, all but Notae homegrown.

Davis displayed a high motor and elite perimeter defense from the get-go, but his play down the stretch and 14 points a game in the tournament helped elevate him to cult status among the fan base. (He was the first Razorback basketball player to sign an NIL deal.) Notae, the SEC’s 2021 Sixth Man of the Year and a spurt scorer in the Al Dillard mold, averaged 12 points a game and was Mr. Reliable when the Hogs had to have a bucket.

Williams, aka “Tall John Legend,” may have the highest ceiling on the team; he averaged three points and four boards but proved clutch in the home stretch. And, of course, Vanover (six points, four rebounds) is back, the slender giant of a man who actually requires high ceilings. His 3-point touch is a legit weapon and his wingspan — at the elbow on offense and under the basket on D — can cause problems.

Also back are 6-0 PG Khalen Robinson, the Little Rock native who prepped at Oak Hill and suffered a season-ending foot injury in December, and UA Little Rock transfer Kamani Johnson, a junior 6-7 power forward who averaged 11 points and seven boards for the Trojans in 2019-20 before his traditional transfer to Fayetteville. He’s a banger at 235 pounds.

Musselman brought in four from the portal, each of whom could be immediate contributors. The biggest portal prize might be Stanley Umude, a 6-6 highly sought swingman from South Dakota who averaged 21 points, seven boards and three assists a game last year for the Coyotes. Umude is a three-time all-Summit League performer who can score from any spot on the floor.

He’s actually played in Bud Walton, when South Dakota visited in December 2019; Musselman essentially got to scout him. The Hogs won that night 77-56, but Umude had 13 and eight.

Chris Lykes is a 5-7 grad-transfer point from Miami who averaged 15 points, four rebounds and five assists for the Hurricanes. Remember, that’s against ACC competition. Though short in stature by D-1 basketball standards, Lykes was named to the preseason all-ACC first team last season. An ankle injury ended his season just two games in, and Lykes is eager to make his final collegiate season count. 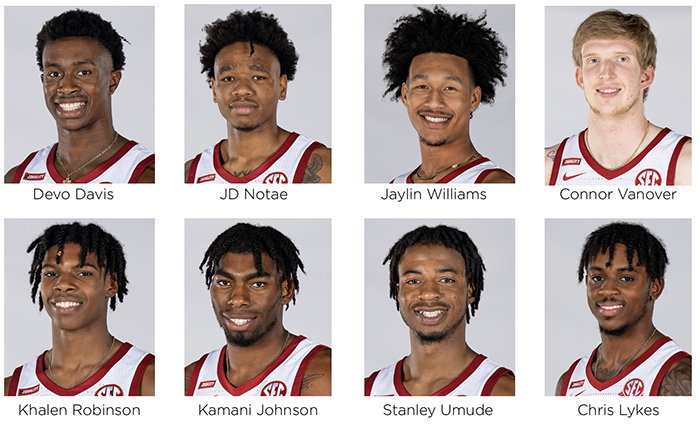 Another 6-6 swingman with a motor (and another ACC grad transfer to boot), Au’Diese Toney put up 14 and five for the Pitt Panthers last season. The portal also delivered Wichita State’s Trey Wade — you guessed it, a 6-6 swingman. Wade averaged just seven points but grabbed six boards a game for the Shockers in 2020-21.

Four-star high school signee Chance Moore, a 6-5 swingman from Brookhaven, Ga., was rated the 84th best player in the nation by ESPN. And 6-6 sophomore guard Jaxson Robinson, a budding 3-point threat, transferred over from Texas A&M. 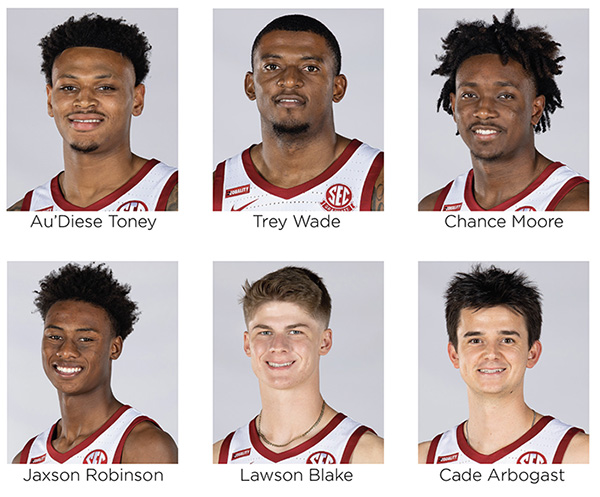 Filling out the bench are walk-ons Lawson Blake of Fayetteville, a 6-10, 225-pound forward who averaged 13 and seven prepping at Link Year in Branson, and redshirting Cade Arbogast, a 6-3 guard from California, who played high school ball at De La Salle for Justin Argenal, brother of new Razorback assistant coach Gus Argenal. 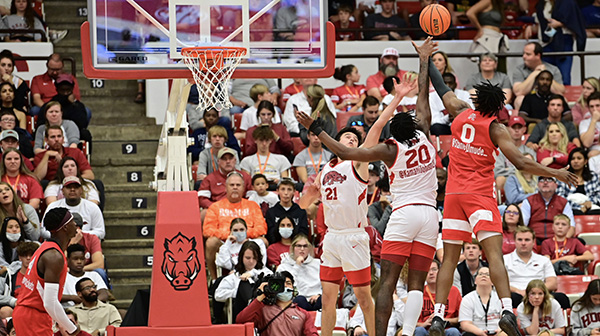 Cade Arbogast (21), Kamani Johnson (20) and Stanely Umude (0) battle on the boards during the Red-White game held in Barnhill Arena.

Vanover and Williams, of course, will fill space in front of the basket, and both are capable shot blockers, but Musselman’s third installment mostly will be a mid-sized team of bangers that scores from multiple spots — a team of Tony Browns, Lenzie Howells and Ron Huerys, if you will.

Notae will continue to stroke from long range, and others are capable, but the Hogs likely won’t rely on 3 balls as much, despite Musselman’s taste for them (three points are more than two, after all).

SEC media picked Arkansas third behind Kentucky (expected to return to its normal self after a bizarro-world 9-16 campaign) and Alabama. Look for the Hogs and Tide to jockey for that No. 2 position behind the Wildcats, and possibly even supplant them, in the years to come.

It feels like Razorback basketball might actually have cleared a symbolic hurdle, one that plagued it for two decades. Mike Anderson’s final season in Fayetteville, a milquetoast 18-16 campaign in 2019, mirrored most of the last 20 years — blips of hope notwithstanding, rather pedestrian overall. Anderson’s record of 169-102 overall and 78-64 in conference play, winning percentages of .624 and .549, might be good enough at places like Georgia but at Arkansas, cracks of apathy were starting to show from what had always been considered one of college basketball’s best fan bases.

Bud Walton Arena, however, is no longer crying out through the echo of empty seats. (Although to be fair, 95 percent of college basketball programs would kill to average home crowds of even 10,000, very much an off night in Fayetteville.)

For years, Arkansas kids listened as their moms and dads told tales of hardwood glory dating back to the Triplets, of beating mighty UCLA on the way to the ’78 Final Four; of US Reed getting tripped against Indiana State; of Eddie and Abe and Joe and Akeem; of May-Day and Big O; of Big Nasty and Scotty’s rainbow 3. “I wish you could experience that,” they’d tell their eager young fans. “But just wait. It’ll be that way again.”

It looks like “again” may have arrived. It looks like Hawgball is back, and it’s taking the Muss Bus. Buckle up and enjoy the ride. 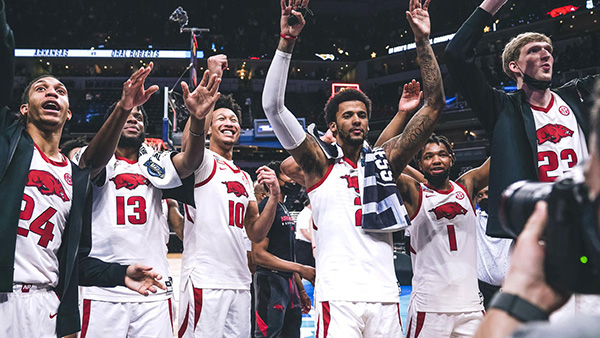 Players joined in on a post-game Hog call after the Sweet 16 win over ORU. 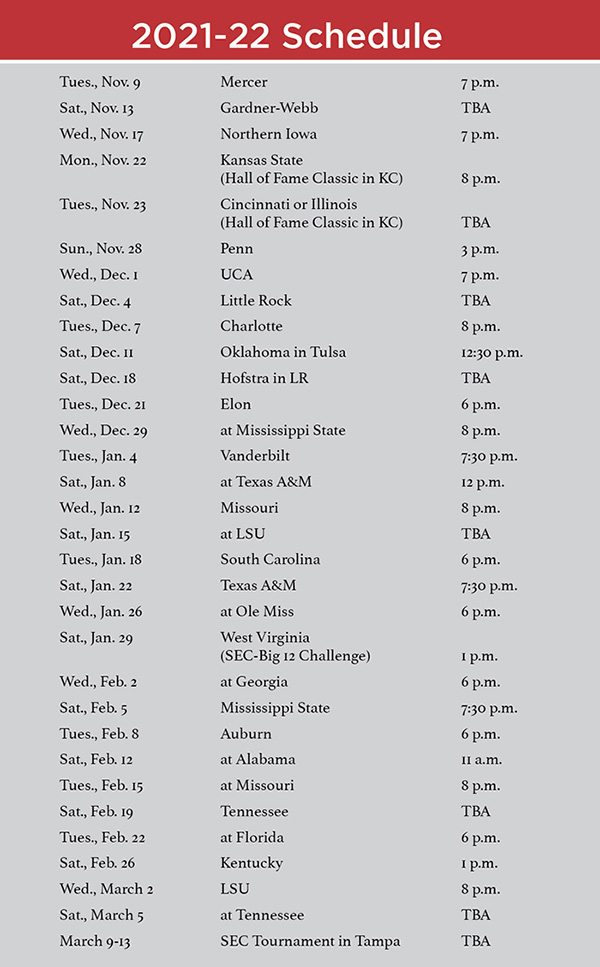