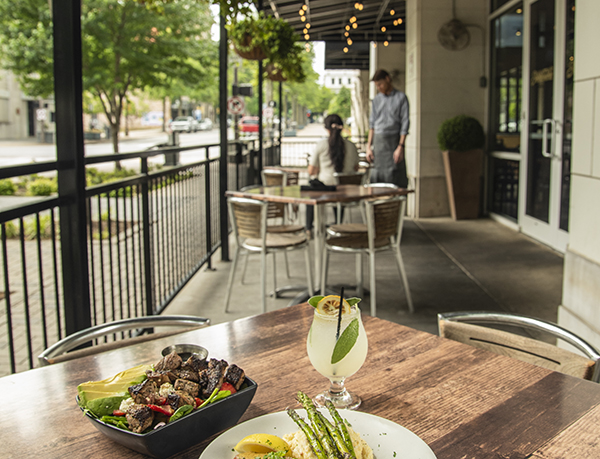 Leaf-speckled light dances across your table. A June breeze wafts over, bringing aromas of the brick-oven pizza being brought to a family nearby and the sounds of some girlfriends laughing over late-afternoon drinks. Somehow, cocktails taste better out here. You snap a perfectly-lit pic of your exquisite entree for your Instagram and tag the friends who joined you here after work. And you exhale. The feeling of letting go of the day’s stresses feels positively amazing. Because after months of cold, severe and just-plain-temperamental Arkansas weather, and following two straight years of worldwide existential angst, patio season is not only back, it’s better than ever before.

After speaking to restaurateurs and others in the know and querying friends around the state, here are a few reasons we Arkansans love our patio dining so very much.

Patios are primal? That sounds like overstating our desires to enjoy salads at outside tables, but think about it. Dining outdoors is our species’ most natural state. The earliest homo sapiens and their predecessors ate food wherever they foraged it, or eventually eating the animals they hunted around campfires with others. Eating outdoors, under sky and sun and moon, was one of humans’ first social behaviors. We only came indoors for shelter, and stayed there for proper dining after the development of manners and etiquette that were considered more civilized.

Joel DePippa, a Little Rock attorney and food blogger (Southern Ash Blog), says of patios, “They draw us partially because humans crave to some extent or another a touch of fresh air and sunlight, either filtered or not. Our lives are spent more and more inside working or at home engaging with electronic media, so the patio draw is something that crops up.”

Heather Baber-Roe is owner of multiple patios at her restaurants — Baja Grill in the Heights and Baja Grill Benton, which shares a block and a bonus outdoor yard with her Valhalla :: Kitchen + Bar, and the soon-to-open upscale lounge, RŌBER. 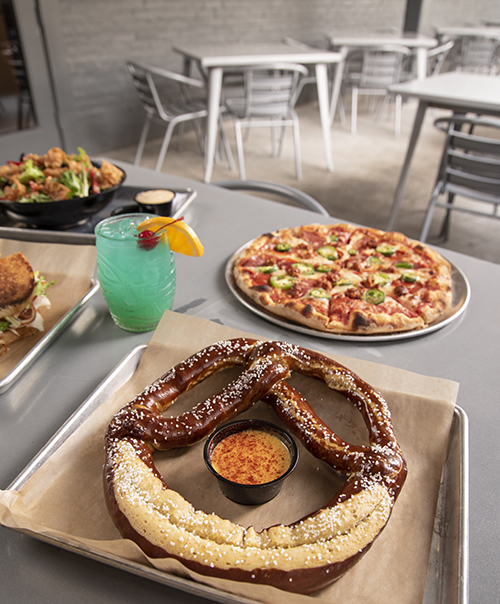 She credits the enthusiasm she sees in her customers especially as “patio season” finally arrives, as the body’s quest for serotonin, a natural neurotransmitter that is thought to regulate anxiety, happiness and mood.

“When you’re going out, it’s all about building up that serotonin, where you’re not inside your house having to do chores or cook dinner,” Baber-Roe says. “But you’re also not in your office working; you’re just relaxed, chilled out, enjoying the weather and being somewhere you don’t have responsibilities.”

Jennifer Reed of Little Rock says she got back into patio dining this time last year (pre-Delta), and has fond memories of “outdoor lunches and dinners with dear friends at La Terraza, Ciao Baci and The Fold,” being especially refreshing after more than a year of only getting takeout. The return to patio gatherings with friends, she says, “felt like getting out of prison.”

While the fresh, open air has always been a draw for patio dining, it took on new significance during the pandemic. Many restaurants expanded their outdoor seating and amenities, because customers knew eating outside was safer from airborne contagion.

Little Rock nurse practitioner Jen Shuler says one particularly wonderful patio experience she had was during that time, a rare instance of the restrictive pandemic conditions setting up a romantic memory. “For our anniversary, and because of COVID, La Terraza put us on their third-floor balcony for private dining, just us,” she says, adding the experience of having that intimate patio all to themselves was as wonderful as it sounds.

Another irresistible draw for diners since time immemorial is eating next to bodies of water. Like sunlight, water occupies its own special place in our brains and imagination.

“It’s hard to beat the patio at Brave New Restaurant,” he says. “The combination of delicious meals and the view over the Arkansas River keeps it at the top of our list of favorites.”

Anne Holcomb of Little Rock recommends another such riverside restaurant: “We’ve enjoyed the outdoor area at 42 Bar and Table a LOT — always a breeze off the river, in an interesting setting.”

Live Music and Other Diversions

Listening to musicians has long been a draw for people who come to hear bands and performers on stage in the open air, while the audience eats tacos and drinks margaritas. 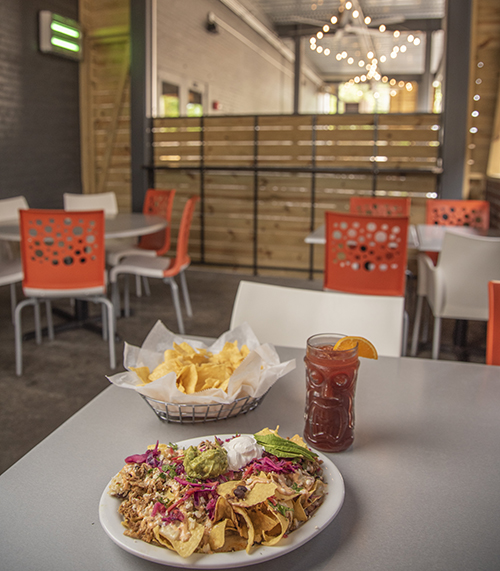 Baber-Roe says that, like in the block her three Benton restaurants share, when restaurant owners have the space, these days they’re all about adding extra amenities for outdoor entertainment. Besides patios, her Benton restaurants have an outdoor stage, a ping pong table, baggo and other yard games, plus comfortable outdoor seating areas. Other restaurants around the state have built outdoor bars, pizza ovens, mini-golf or gardens and scenic paths that wind through the patio. “Restaurant owners seem to be doing more with outdoor spaces now,” Baber-Roe says. 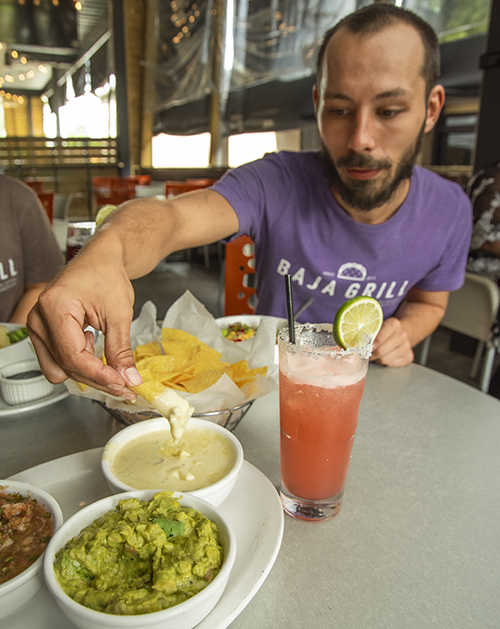 Firepits are popping up all over, too — fire being yet another of those primal draws — where friends and couples can gather around the flames, creating happy memories, sometimes even with an order of S’mores.

“The one true greatest patio is Rolandos, up and behind the restaurant in a little hollow before the rock face, surrounded by trees and absolutely a gorgeous place to eat delicious food,” McGraw says. “All others pale.”

McGraw’s wife, Rebecca, loves the outdoor dining at Mike’s Place in Conway. With its central fountain and climbing ivy, she says it’s “like eating in a teeny weenie microcosm of New Orleans.”

“It has a small shaded patio with an equally small bandstand. The car traffic sounds coming from nearby Garrison Avenue are not overwhelming,” Woodward says. “Less than 5 feet away are the tracks of a functioning trolley of the Fort Smith Trolley Museum. ‘Charming’ does it justice.”

And Sometimes There are Dogs

Baber-Roe says her restaurants are enclosed and heated for the cooler months so they don’t lose any capacity.

“People will say they don’t want to sit on the patio, imagining it’s going to be cold out there, despite being enclosed,” she says. “I tell them, ‘I promise you, it’s warmer out there than in here!’ We have so many heaters.”

But a tradeoff for the year-round patio dining is that only in the warm breezy months can people stop in with their dogs. “We can’t have dogs outside when it’s enclosed,” she explains, “because of the health codes. But as soon as it starts getting warm, people will be calling and asking, ‘Is your patio open? Can I bring my dog?’”

Amy Forbus, director of communications for Hendrix College, is a dog-lover and a patio-lover. It’s one reason she’s fond of the patio at Conway’s Toad Suck Buck’s, right by the Arkansas River.

“It’s super casual, great steaks, with usually a dog hanging around waiting for someone to finish a t-bone,” Forbus says. “And frequent live music, not too loud.”

That sound element matters. Crissie McBride, a Fort Smith tattooist, says she loses interest in eating at places that have poor acoustic sound baffling. And it’s an advantage of patio dining.

“A few of the people I dine with are hard of hearing, and I like not worrying quite so much if we’re bothering others outside.” She adds, “Open-air dining feels less crowded even if holding the same amount of people.”

Danielle Asfordeh is a member of the League of Women Voters in Pulaski County. She says La Terraza’s patio is a favorite hang-out, partly because it’s quiet enough to hold extended conversations.

“I have lovely memories of gathering with women there from the League to strategize with friends I don’t see often,” Asfordeh says. “It’s always the perfect temperature and the volume is always perfect. And you can snack on tapas for hours!”

DePippa says he prefers patios that are more relaxing than frenetic.

“I love a patio with character, that seems an extension of the restaurant itself. It can be enclosed, without a view, but so long as it feels cohesive instead of an ‘add on,’ they work so well.”

“It’s funny, because we’ll be on a wait, and people will say, ‘Oh, we’ll just sit on the patio!’” she says with a laugh. “They don’t realize that’s the prime real estate, the areas that go on the waitlist first. Everyone wants to be outside enjoying this weather.” 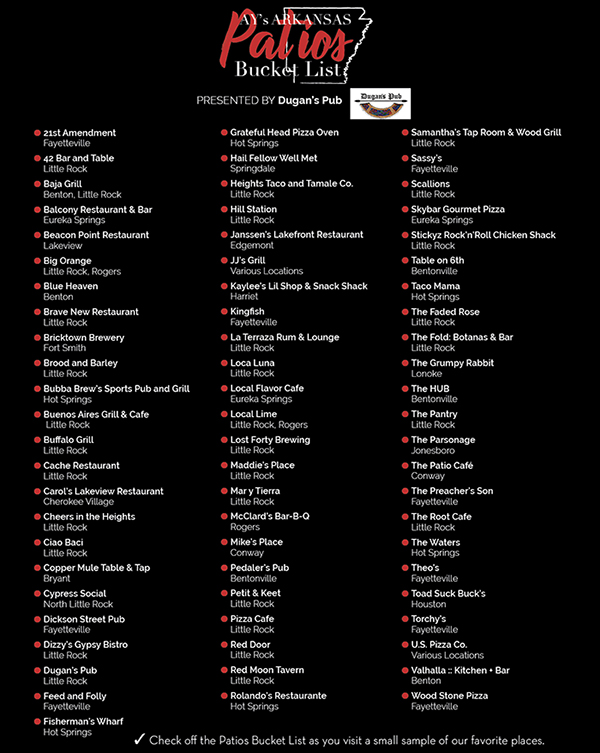