[dropcap]I[/dropcap]t’s a bit after nine on a cold Saturday morning. The air is filled with good home cooking aromas-biscuits in the oven, the sweetness of pastries, sausage and hot coffee. Tables are filled with friends holding lively conversations. A line of a dozen or so folks eager to have breakfast scan the dining room to claim ownership of the next vacated table.

This is the scene pretty much every morning at the nationally award-winning The Root Cafe located in the South Main area of Little Rock called SoMa. What’s so special about The Root Cafe that after five years of opening, it still inspires people to line up at times a half hour before opening?

After three years of contemplating and planning, Co-owners Jack and Corrii Sundell made the decision to open a restaurant in 2009. They had been sharing their vision with friends and sought their support for three years prior to taking the plunge. “We were crowd funding before there was such a thing,” chuckles Jack Sundell. He had acquired a number of $10 donors who were promised a free meal in return for their investment once the restaurant opened. The donors’ refusal to take him up on the offer left him gob-smacked. “They would say, you still need the funds—you just opened—and would insist on paying for their meals. That meant a lot. It’s more amazing to have customers who are still with us five years later.”

Traci Rancifer of Little Rock and best friend Kelley Eubanks of Fort Worth planned on ordering “to-go“ breakfast, but snagged an empty table allowing for a relaxing morning of catch-up conversation. 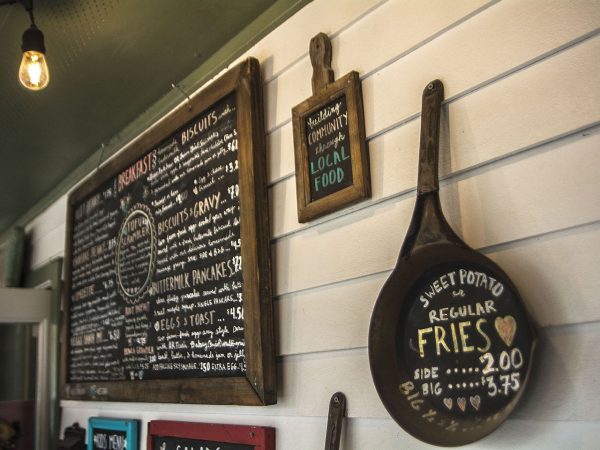 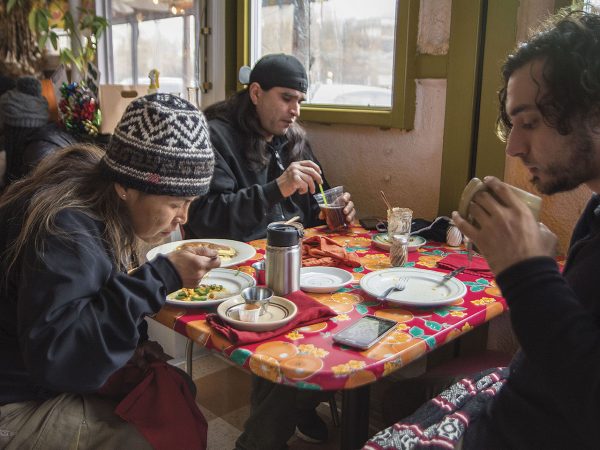 (left to right clockwise) Arizona firefighters Kay Livingston, Nate Hernandez and Joseph Espinoza stopped for breakfast enroute from a deployment to fight wildfires in North Carolina and the deadly Gatlinburg, Tennessee fire. Thrilled with their breakfast discovery, they immediately hit the road hoping to make it to Amarillo, Texas for a night’s rest closer to home. 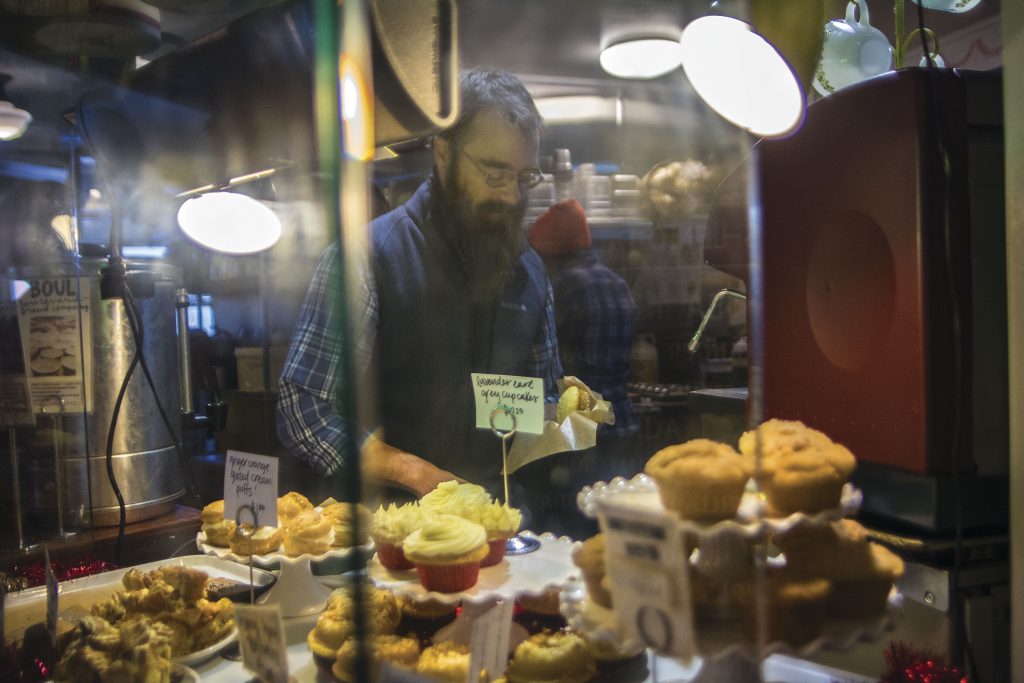 The Root Cafe co-owner Jack Sundell selects a couple of his trademark donut muffins for eager diners. Sundell continues to be humbled by the outpouring of support for his growing dining spot in Little Rock’s SoMa district.

For more evidence of how special The Root is read on. A friend of Sundell’s suggested the restaurateur apply for a Mainstreetmission grant for burgeoning entrepreneurs. Sundell quickly completed the application believing he had nothing to lose. He knew that 20, $25,000 grants would be awarded nationally. Not only did The Sundells win, they won the biggie—not $25,000, but $150,000. The funds would allow them to expand their tiny kitchen. It had once worked well when the building housed the memorable and popular Sweden Crème Drive-In. But the facility was cramped for his growing foodie base that was requiring more dine in space.

And the monetary influx didn’t stop there. Cable news channel HLN viewers selected The Root Café as winner of the Growing America: A Journey to Success series in 2014. The check was a surprise, presented at the restaurant by Ty Pennington most known for the ABC network series Home Makeover: The Home Edition.

Sundell’s journey to The Root Cafe began when a small-town kid from Monticello in south Arkansas traveled to Conway to the hallowed halls of Hendrix College to study, and then went on to New York with plans to teach English. “Instead of teaching, I ended up bartending, I worked at some nice restaurants and ate at quite a few,” stated Sundell. A career in the restaurant business was nowhere on his radar. However, a career at a school was, and soon Sundell relocated to Michigan as a counselor at a fine arts boarding high school. 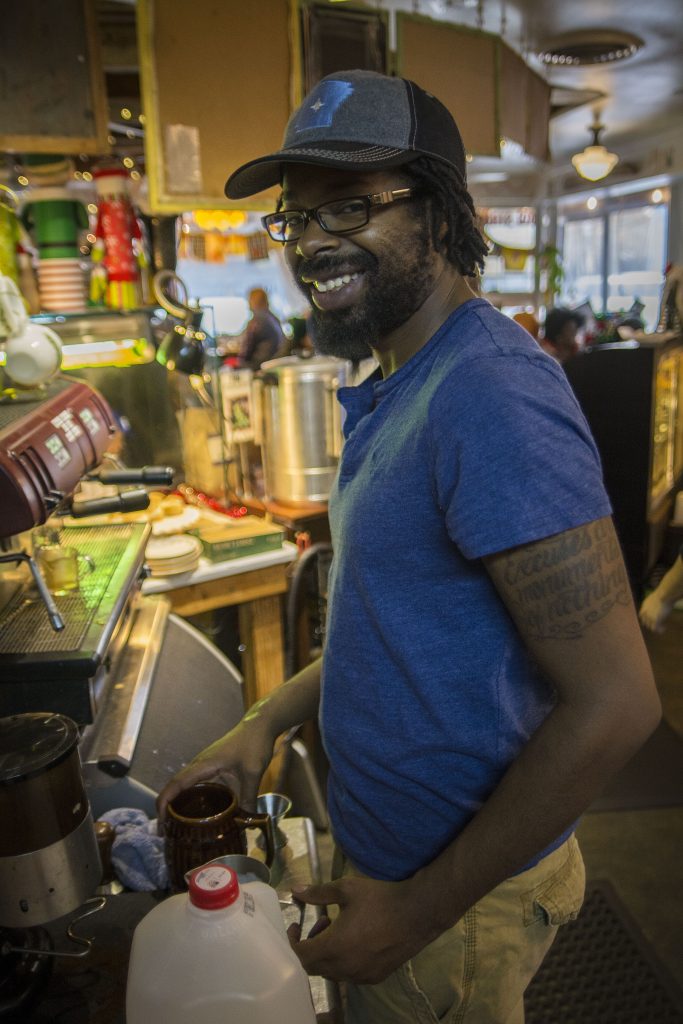 Brandon Frazier is all smiles as he readies to make lattes for a packed restaurant.

It was here his culinary awareness was piqued. “I was introduced to organic foods and could taste the difference,” he said. A stint with the Peace Corps in Morocco expanded his awareness of the connection of food to people. “I observed the local rural food economy and understood how owning a cow impacts a family’s ability to eat,” Sundell said. “Raising chickens meant you ate better than another family. Food sovereignty made sense. People who controlled their food supply had more to chose from.”

He laments what he calls a loss of food culture. “It’s a cultural knowledge. Cooking is the same, what’s now called farm-to-table, is what we used to grow up with; we’ve lost that food culture.”

Sundell was intrigued by Morocco’s vibrant social cafes where people came to play games and talk politics. He appreciated the local interaction. He wanted to open a social hub like these for the community at home.

His return to the States found him in a livestock internship in Perryville, west of Little Rock, at the Heifer International Ranch. Living on a working farm, Sundell was eating what was raised; the meat and organic vegetables. “I got recipes from my mom and became enamored with eating fresh food from where you come from,” he said.

Eventually, Sundell moved to Little Rock where he met his wife Corrii, who grew up on a farm and also appreciated good, fresh foods.  The two spent three years fleshing out the idea of a ‘real food’ restaurant, and raising funds for their dream by teaching canning and preservation workshops and holding mini concerts.

Fast-forward to today and a restaurant filled daily with happy customers. But since the restaurant originally opened as a lunch destination, how are they possibly more popular for their award-winning breakfast? 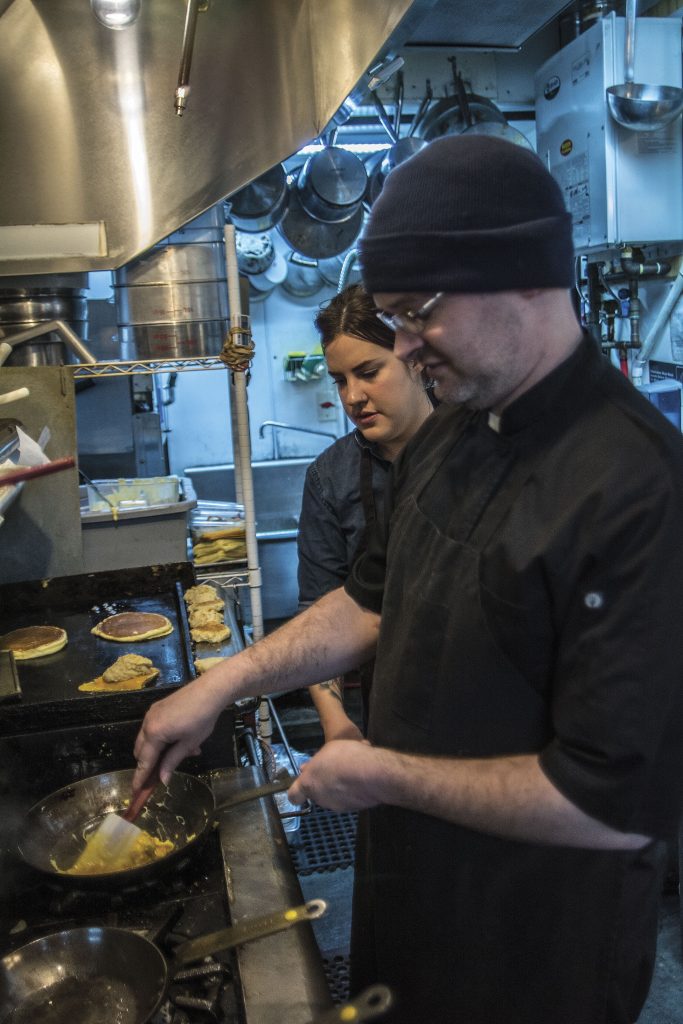 Mickey Rial and Monica Chatterton, who Sundell has designated the Breakfast Architects, make finishing touches to an egg order. The Root Café’s award-winning pancakes are rising on the griddle.

“We didn’t do a full breakfast when we opened. It was lunch,” explained Sundell. “We had a few pastries and coffee, but soon realized our customers wanted more; they were like, “you need to put some eggs on that grill!” he says laughing. “Breakfast has always been my favorite meal. My mom was a great breakfast cook. She made the best French toast and pancakes.”

So, in response to demand, The Root started offering five days of breakfast. Then came Sunday brunch, whose origins are from a request made for brunch when the Bernice Garden Farmer’s Market down the street began to open on Sundays. Sundell gives credit for their morning success to his Breakfast Architects, including lead breakfast man Mickey Rial who’s been in the kitchen almost four years. Hendrix grad, Monica Chatterton, who Sundell describes as an “outstanding creative force” explores her creative freedom with goodies like homemade pop tarts and popular pancake specials.

Even with his success Sundell doesn’t take for granted his faithful foodies’ following. “I’m always flattered when people choose to come here. Getting to do what we do, to cook good food for people from scratch is such an honor. Our philosophy is we want to make everything we can from scratch. The eggs are from local farms. I know they say there’s no nutrional difference between farm fresh and store bought eggs, but I think there’s definitely a taste difference. And for me, if there’s a taste difference there’s a nutritional difference, whether it can be measured or not. So for us, it’s the freshest ingredients—whether it’s the local kale for the Root Benny (The Root’s version of eggs Benedict), or locally sourced ham and sausage from Grass Root co-op.” Sundell continues, “We do fresh squeezed lemon juice for our hollandaise every morning.

According to Sundell, food from scratch has a discernable taste difference. “That’s why we make sausage gravy just like your grandmother would have with sausage and sautéed onion.” To Sundell, there’s no getting around top quality ingredients for breakfast.

A food purist to the end, Sundell does not have tomatoes on his burgers in the winter. Seriously. They’re “out of season” and for him, the taste is not up to par. “We’re currently tasting fall tomatoes from a farm in Damascus that are pretty good, so we’ll see,” he says with a smile.

But, back to breakfast. Sundell’s initial thought of The Root was that the weekday crowd would be more of a business kind of lunch place. Ready to be pleasantly surprised, he’s thrilled that Saturday is his busiest day and features all day breakfast, as well as burgers. “We’re in such a cool area, and a busy Saturday means local neighbors are coming to eat.”

Ashland and Madeline Bourn of Little Rock are picture-perfect enjoying conversation and a great breakfast at The Root Café at least two or three Saturdays each month.

When you ask Sundell what’s his best breakfast item, it’s like asking him to pick a favorite child as all his children watch him decide. He cites one, and then remembers the awesomeness of another. “The Root Benny was featured in Garden & Gun magazine; our French toast is almost as good as my mother’s, and that’s what I usually order . . . The Big Bessie and Main Street Hash that’s dynamite. (Main Street Hash is a Sunday only item) The sausage, egg and cheese . . . with biscuits made from scratch . . . top quality, sausage from Honeysuckle Lane which we serve with a side of muscadine jelly made from Post’s muscadine wine . . . I just think, man that’s a good sandwich! And the biscuit and scratch gravy with two eggs!”

As we said, he loves them all and can’t bare to slight one.

Fortunately for us foodies, we get to enjoy them all along with him.