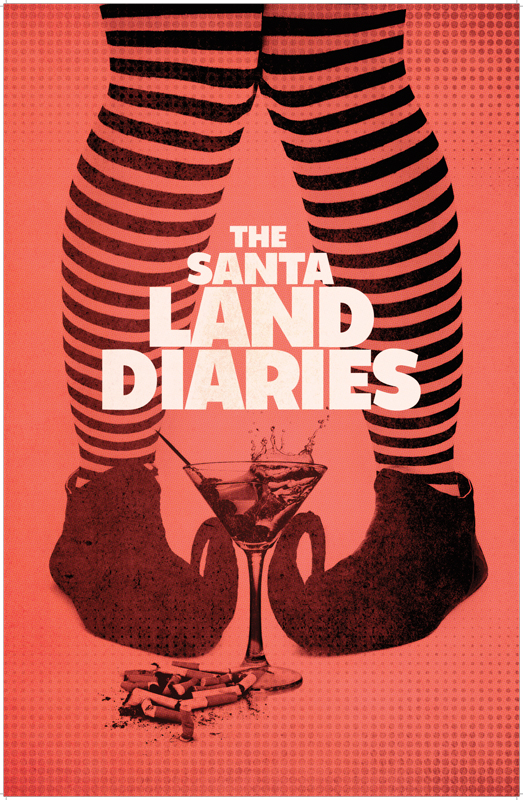 By Kristy Alpert | Graphic courtesy of The Rep

Not Your Mama’s Matinee: The Santaland Diaries offers an adult alternative to snowflakes and candy canes

[dropcap]A[/dropcap]nyone looking for an upbeat tale of Christmas cheer that comes wrapped in a happy package with sweet, sweet tidings of joy… had better keep looking. There are no Sugarplum Fairies or magic snowmen in The Santaland Diaries. In fact, the only Christmas character in the play is a vulgar, chain-smoking seasonal department-store elf named Crumpet who took on the job to make rent in his New York City apartment.

Inspired by a collection of stories of the same name that were made popular on National Public Radio (NPR) by humorist David Sedaris, and adapted for the stage by Joe Mantello, this semi-autobiographical play opens at the Arkansas Repertory Theatre’s (the Rep) Black Box Theatre on Dec. 6 to offer an irreverent alternative for holiday theater-goers.

“It’s the story of a man who takes a job as an elf at the Macy’s for the holidays,” says Benjamin McGovern, director of The Santaland Diaries at the Rep and the producing artistic director of Artistry Theatre in Bloomington, Minnesota. “He doesn’t frankly see himself as a very good man, and he feels like he’s made a pretty pathetic choice. So he’s not at a particularly good place in his life, you might say. But he finds a surprising little sliver of holiday magic amongst all the department store fakery.”

The one-man play chronicles Crumpet’s day-to-day observations in front of and behind the scenes of “Santaland” where he worked at Macy’s during one very chaotic Christmas season. From applying for the role until his last day on the job, no topic is off limits as Crumpet recounts his run-ins with drunken Santas, aggressive parents and the racially charged dilemma that come with being a “Pointer Elf.”

McGovern is making his first trip to Little Rock to direct this cult-classic holiday favorite, bringing his award-winning directorial style (most recently, he directed the Ivey-award winning production of Wit, with Sally Wingert) to the city along with fellow Little Rock newcomer, actor Grant Fletcher Prewitt (who was most recently seen as Frank Lubey in All My Sons at the Repertory Theatre of St. Louis and who holds an MFA in acting and directing from The University of Missouri Kansas City). McGovern hand-selected Prewitt for the role of Crumpet, having worked with him on previous projects and determining the actor would be the ideal fit for the part.

But don’t think for a minute that being singled out for the role of a crotchety, embittered department-store elf has anything to do with Prewitt’s true off-stage personality: The New York City-based actor is known for his upbeat attitude and charming wit.

“I’m a big fan of David’s work and I’ve done one-man shows before,” Prewitt says of why he decided to take on the infamous role. “I was interested because of the satirical aspect of his humor and the fact that we all have some cynical periods in our lifetime. The clowning I’ve done in my theater training makes me very excited to delve into this role. I think that the censor always has a place in real life, but reading a play with a character who just doesn’t care about crossing the politically correct line is sometimes irresistibly refreshing. And honestly, we’ve all worked at jobs that we hated, so seeing his responses to being a ‘cheerful’ elf in Macy’s is about as close as we get to reliving those experiences without the censor.”

This is the first time the Rep will run concurrent productions with staggered curtain times throughout the holiday season, allowing patrons to see multiple productions on the same day or night. There will be an opening night party with the cast on Dec. 8 (RSVP required) and a special meet and greet with “Crumpet” on Dec. 13 following the performance. Other events during the show’s run include a beer night with Lost Forty and the Arkansas Times on Dec. 7 as well as a signed/interpreted performance on Dec. 20 and the official after-party on Dec. 23 that takes place in Foster’s after the performance.

Although the show is more geared toward adults — Crumpet drops a few F-bombs and brings up a few PG-13 scenarios throughout the performance — the show still highlights the childlike wonder of the Christmas season and will have the audience roaring with laughter in between bouts of nostalgia of time spent navigating the chaotic joy of the holidays.

“The last moment in the play is my favorite,” Prewitt says. “It gives you this false sense of Christmas spirit and then throws it back in your face like a snowball. It’s quite funny and yet you find yourself searching for the love and compassion that you most always get around the holidays.”

The Santaland Diaries has become an annual tradition for grownups around the nation since it first debuted more than 20 years ago, and McGovern and Prewitt’s rendition of this iconic production adds the perfect salty spin on the sugary-sweet season.