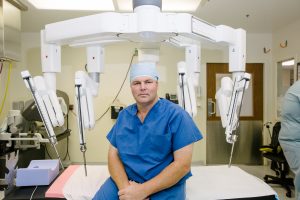 Dr. Joseph Ivy is a gynecological oncologist with CARTI in Little Rock and Highland Oncology in Northwest Arkansas.

By Dwain Hebda
On the roster of cancers, ovarian doesn’t always get the top billing that breast or lung or even colon cancer does. That’s strangely fitting, considering the disease remains a perplexing riddle, content to hide in the shadows of medicine and science, eluding reliable early detection and striking savagely in its later stages.
“Ovarian cancer, in general, is much less prominent, and it’s very difficult to detect in Stage I of the disease,” says Dr. Joseph Ivy, gynecological oncologist with CARTI Cancer Center in Little Rock and Highlands Oncology Group in Northwest Arkansas. “If you can catch it in Stage I, ovarian cancer is highly curable. Unfortunately, we catch it 80 percent of the time in Stage III or IV. That’s why they call it the silent killer.”
According to statistics compiled by the Arkansas Ovarian Cancer Coalition, ovarian cancer accounts for roughly 3 percent of cancers in women but is the fifth leading cause of cancer-related death among women and the deadliest of gynecological cancers.
There are more than 30 types of ovarian cancers, commonly classified into three categories of tumors. The National Ovarian Council Coalition lists these as epithelial ovarian tumors, which develop from the cells that cover the outer surface of the ovary. The most common and most dangerous of all types of ovarian cancers, it accounts for 85 to 90 percent of all cancers of the ovaries.
Epithelial ovarian tumors are rarer in younger women, and generally, though not exclusively, appear in women over 50. The other two categories, germ cell tumors and stromal tumors are far less common and lethal, but can strike at earlier ages, even in teenagers.
“Age is the most important risk factor,” Ivy says. “On the spectrum of [ovarian cancer] tends to affect more post-menopausal women. Although, plenty of pre-menopausal ladies get it too. The youngest I’ve ever seen with a true ovarian cancer would be about 13. But the vast majority are between 50 and 70.”
The American Cancer Society reports that the five-year relative survival rate for all ovarian cancers is 47 percent. However, that number can vary widely with the patient’s age, type of cancer and stage in which it is detected, which in 70 percent of epithelial ovarian cancer cases means late stage. 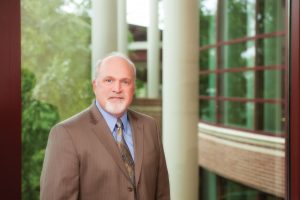 Therein lies the problem, says Dr. Randy Hightower, gynecological oncologist with Plaza Gynecologic Oncology at Washington Regional Medical Center in Fayetteville.
“If you could screen someone and catch it early, that’s the ideal thing,” he says. “But our screening methods for diagnosing ovarian cancer earlier are just not that good today.”
What contributes to ovarian cancer being such a hard target is early symptoms are not particularly unique to the condition.
“Cancers, such as endometrial cancer, have different things that bring the patient in to see us, such as vaginal bleeding and vaginal discharge, so we can do some early testing,” Hightower says.
“For ovarian cancer, it’s just the opposite. People have symptoms such as bloating or maybe they feel distended, things that most of us may experience throughout our life and not have anything like cancer. Therefore, it’s hard for providers or for the patient to realize that’s something abnormal.”
At present, the most reliable test is one that looks for a gene mutation. But these only predict that a woman is more predisposed to develop ovarian cancer at some point, which isn’t the same thing as detecting the actual onset of the condition.
“The one thing that we always know for certain is, if you have a genetic abnormality of the BRCA gene, that ups the risk to about 50 percent of developing ovarian cancer,” Ivy says. “The genetic test is so expensive that unless you actually have the disease, it’s really not fruitful just to get tested for the genetics. Unfortunately, you have to have developed the disease first and then the test can be beneficial to everyone in the lineage.”
Arkansas’s ovarian cancer rate is actually slightly lower than the national rate, averaging less than 190 cases per year between 1997 and 2005. But there’s still room for improvement in many parts of the state, especially when it comes to public information.
“Patients are reading a lot about ovarian cancer, and over the years, that education has been more readily available for them,” Hightower says. “In the state of Arkansas, we still have a number of areas that are not as informed, such as in the rural areas.
“I’ve had a number of patients that finally come in to the doctor or the emergency room and they’re throwing up. They do some tests, and lo and behold, there’s an ovarian mass and this patient has ovarian cancer. So, there’s still a lot of individuals in the rural areas that are just not knowledgeable about that.” 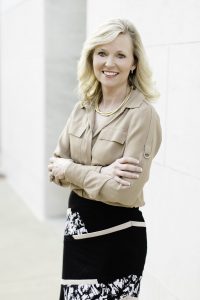 Dr. Kay Chandler is a gynecologist with Cornerstone Clinic for Women in Little Rock.

Dr. Kay Chandler, gynecologist with Cornerstone Clinic for Women in Little Rock, says women need to understand their bodies and make sure they are following a regular schedule of general and gynecological checkups.
“One of the things I think people have a misunderstanding about is they think a pap smear is what screens for ovarian cancer, and that’s not the case,” she says. “Pap smears screen for cervical cancer, and they recently changed the guidelines to say that most women don’t need a pap smear every year. So, a lot of women have this misconception that they don’t have to come to the gynecologist at all. That’s not correct.”
Chandler says every woman should have an annual gynecologic exam because such a checkup provides specialized examinations that aren’t always performed in other medical settings, such as a pelvic exam.
“A woman has to be aware of symptoms and come in if she’s having problems,” she says. “But even if she’s not symptomatic, she should come to have an annual exam. I have had women come in totally not symptomatic at all and find a mass and turns out that it’s cancer.”
As serious as that is, Chandler says women should avoid the kind of information overload that results in them scaring themselves unnecessarily.
“I do think women are more educated, a lot of women do come in with questions,” she says. “I also have patients that come in and say, ‘I don’t have a family history, but I want the CA-125 [cancer antigen test].’ I have to explain to them that if you’re not high-risk and you don’t have symptoms, there is a possibility for false positive. I’ve seen that once or twice and then you’re chasing your tail trying to figure that out.
“Understand,” she adds, “I would rather somebody come and get checked out than to ignore something. But more women Google things and get scared and you do oftentimes have to talk them down and say it’s OK.”
Research has yielded some positive developments, including new drugs and a better understanding of tumors from genetics to surgical options. 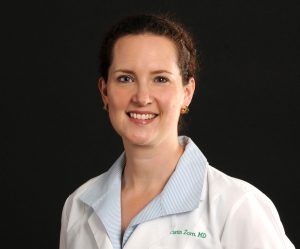 Dr. Kristin Zorn is the director of the UAMS Division of Gynecologic Oncology.

“Recent research has led to the understanding that what we have traditionally called ‘ovarian’ cancer in fact arises in the fallopian tubes in most cases,” says Dr. Kristin Zorn, director of the UAMS Division of Gynecologic Oncology at the UAMS Winthrop P. Rockefeller Cancer Institute.
“This has led to a focus on removing the fallopian tubes in a procedure called a salpingectomy when women who are done with childbearing are going to the OR for a tubal ligation, hysterectomy or other gyn surgery. While it is still too early to know if this will cut down on the rate of ovarian cancer, we have high hopes that it will.”
In reality, medicine is focused more on improving the quality of patients’ lives post-diagnosis, at least until science cracks the code on early detection. And in that sense, prognosis is often quite good.
“While we don’t cure ovarian cancer as often as I would like,” Zorn says, “We can help women tremendously with treatments to decrease their symptoms and often prolong their lives by years.”
RELATED: Racing for Hope, Children