The Taco The Town

Well, you’re in for a warm, tortilla-wrapped treat. When it comes to tacos, there are few parts of the state that have ‘em like Northwest Arkansas. From fine dining spots in Bentonville and Rogers to authentic taquerias in Springdale to hip taco shops in Fayetteville, there’s quite literally something for everyone.

Ready to try what Northwest Arkansas has to offer the taco connoisseur? We’ve put together this handy guide — let’s call it the Northwest Arkansas Taco Tour — to help you navigate your way through the region’s most delicious spots.

Hungry yet? You will be. 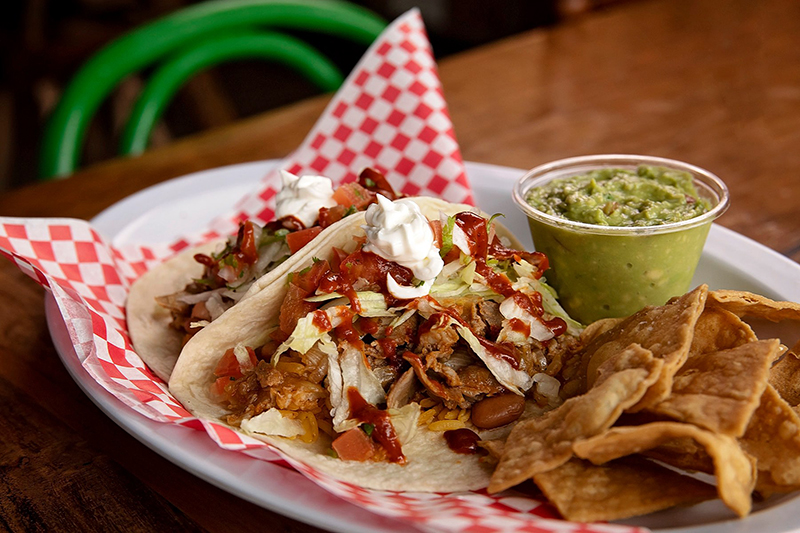 If you’re talking tacos in Northwest Arkansas, or Mexican fare in general, it’s hard not to start with Yeyo’s. While it’s not the region’s oldest, it’s certainly one of the most venerated joints to serve tacos. What started as a humble food truck near the downtown Bentonville Square, Yeyo’s has cultivated a following of loyal fans that stretches well beyond the state’s borders.

Yeyo’s is a family restaurant owned and operated by Rafael Rios. The restaurant is named after his father, who reportedly inspired him to start the original food truck years ago. The food truck, which still serves up incredible tacos on the Bentonville Square, gave way to the brick-and-mortar establishment in the 8th Street Market. Rios recently added a mezcaleria and taqueria in Rogers, known as Yeyo’s at The 1907, which shares a beautiful, historic space with Onyx Coffee.

What to order: Mexican Street Tacos. An order comes with five mini corn tortillas filled with your choice of meat or veggies, cilantro, onion and one of their signature salsas. My favorite protein is the cochinita pibil — Yucatan-style pork, roasted in banana leaves and achiote sauce, topped with lime, pickled red onions, fresh habanero and salsa verde. You’re welcome.

Oh, and did I mention Yeyo’s has been nominated for a James Beard Award? You know, the Academy Award of food that only one other Arkansas restaurant has received. Not too shabby. 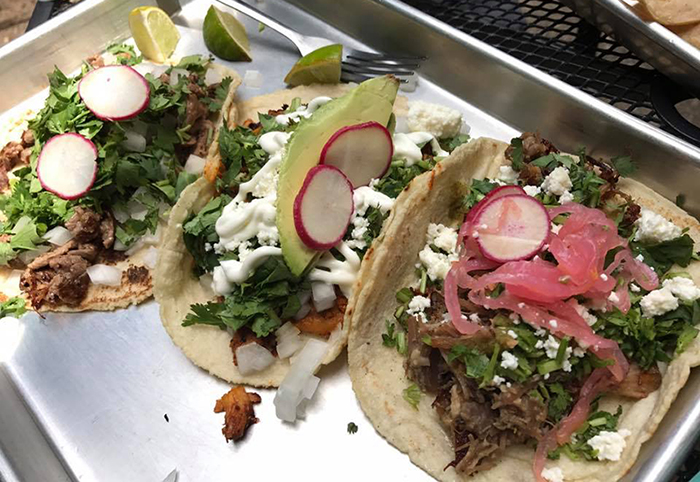 You’ve probably heard of Local Flavor, one of Eureka Spring’s most celebrated dining establishments. Well, think about all that culinary greatness in the form of Mexican street food. That’s Aquarius Taqueria.

This fun, colorful restaurant is nestled in a cliff face next door to Local Flavor on the ever-eclectic Eureka Springs Main Street drag. Here, you can expect incredible, homemade tortillas to wrap your delicious tacos. Wash ‘em down with margaritas made with fresh juices, and don’t forget the mezcal — if that’s your thing.

Pro tip: Catch a table outside on the patio, and enjoy the natural spring waterfall on one side and a view of the city on the other while you chow down on their pescado tacos — crispy, rice battered seasonal fish with pico de gallo, spicy crema and cabbage. If you’re feeling adventurous, spring for the organic blue corn tortillas. 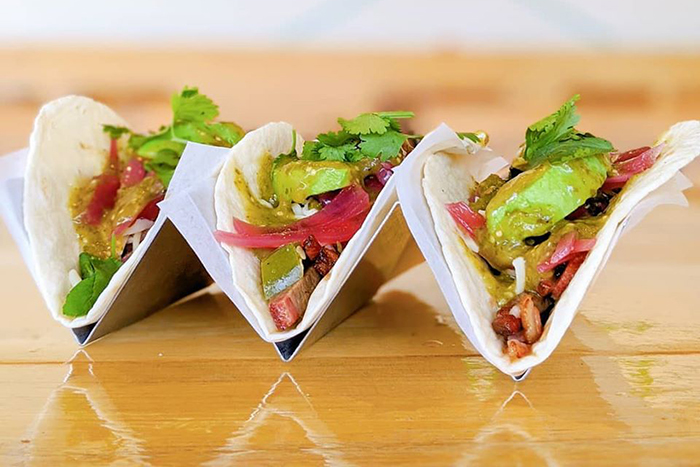 A big favorite among Fayetteville’s college crowd, Con Quesos has proven to be the real deal among the region’s fast-casual restaurant scene. You can be forgiven for mistaking this joint for a chain, as its dining room layout and branding is bar none. But it’s certainly not, having been founded by a young University of Arkansas grad in 2015.

Con Quesos is known for its fusion tacos, fresh ingredients and unique menu. It’s art on a tortilla. You can find flavor inspirations from around the globe, including the Mediterranean, the South, Middle East, Jamaica and Texas.

What to order: Osaka Tacos. This unique taco comes with hibachi shrimp, fried egg rice, green onions, spicy mango sauce and red pepper flakes. Add a side of Four Seasons — its four specialty quesos — and a little salsa or guac. You won’t regret it.

The taco joint for revelers, Los Bobos does a whole lot of its business when most folks are sleeping. That’s because this taco shop is right smack in the middle of Fayetteville’s Dickson Street entertainment district and is only open on the weekends, until 3 a.m.

The owners of popular Dickson Street bar, 21st Amendment, opened Los Bobos in 2013 to meet a late-night dining need for bar hoppers, and they struck gold. Who knew good tacos tasted so much better after a night of imbibing? The menu is simple, but delicious.

Pro tip: Grab some Alambre tacos with a little bit of hot sauce. And if you’re there late, arrive before 2 a.m., when the bars close and the diners line up. If you’re wondering what the draw is to this dish: Bacon is involved.

If there’s ever a place I could eat once, twice, or seven times a week, it’s Mango’s Gourmet Taco Shop on Fayetteville’s MLK Street thoroughfare. This place gets high marks in just about every important taco category — price, convenience, freshness and deliciosity.

This tiny taco shop doesn’t have any dine-in options, although you could pop a squat on one of two outdoor picnic tables. But it does have a pickup window and a drive-thru, which makes dinner pretty easy after a long day of work and a taco hankering.

Mango’s is owned and operated by a veteran of the Mexican restaurant business, who took his family’s recipes and made them into Fayetteville staples. The menu features regular, grilled and seafood tacos, ranging from $3 to $5 for a plate of three.

My favorite: Grilled chicken tacos on flour tortillas with sides of both red and green sauce. They’re simple. They’re fresh. And they’re amazing. Mango’s staff probably won’t make fun of you if you made a second loop around the drive-thru for more. 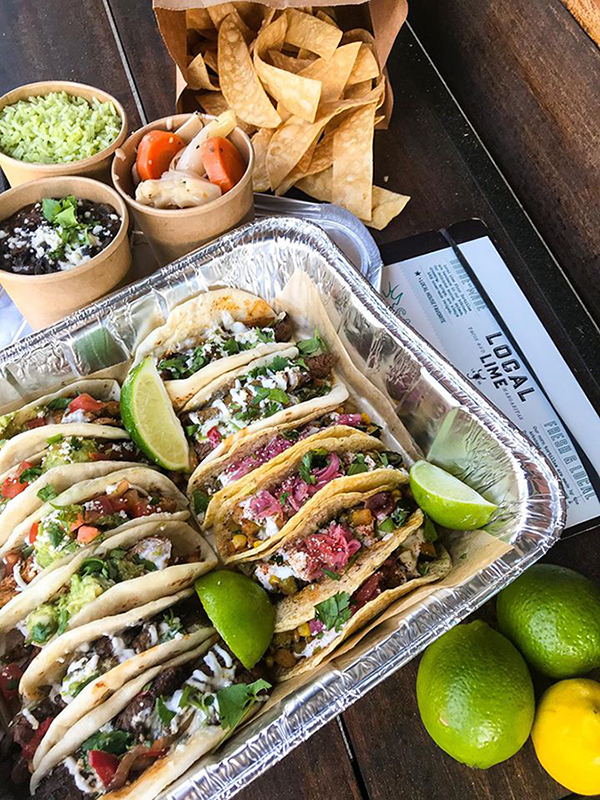 Here’s another place that may give those “hey, this isn’t a local joint” vibes. And I guess that’s because it’s not entirely local. But it’s at least Arkansan. And it’s pretty awesome.

This hip joint is open, bright, inviting, and it’s one of the many incredible culinary creations from the Yellow Rocket Concepts brain trust, which also brought us Big Orange, Lost Forty Brewing, Zaza’s and Heights Taco & Tamale Co. These folks know what they’re doing, and it’s founder studied at the California Culinary Institute and worked in Berkeley at the famed Chez Panisse, a noted training ground for up-and-coming chefs.

Northwest Arkansas’ lone Local Lime (I bet if we asked nicely, they’d give us more) is located in Rogers’ Promenade area, near its burger-serving brother, Big Orange. The menu is both Tex-Mex and Cali-Mex inspired, and you can’t go wrong with anything on it. But we’re talking about tacos, and I do have my favorites.

You would, however, be terribly mistaken to order a taco plate that features three of the same tacos with two sides (like Cilantro-Lime rice, black beans, Jicama-Jalapeno slaw, etc.). Live a little and order a few of those bad boys à la carte. It’s not much more expensive, and you can sample more of the awesomeness.

Taquería Don Güero is one of Springdale’s best taco joints, and you can tell that by the lines that gather out front of its little order/pick-up window at both lunch and dinner. This traditional taqueria is located right in the heart of downtown Springdale’s Emma Avenue, a thoroughfare that’s experiencing quite the quiet renaissance.

The menu here is simple, and the service is quick. Walk up to the window, place your order, take your ticket and wait your turn. It’s how the joint’s been doing it since 2014.

As for tacos, you do have options. There’s your traditional steak, chicken, pork, chicken and shrimp. But there are also tripe tacos, beef tongue tacos, pork stomach tacos and more. What’re you hungry for?

Pro tip: On Tuesday, the steak and chicken tacos at Taquería Don Güero are $1 a pop. Get a few, grab some hot sauce (sample them before putting them on your tacos, because one of them is hot-hot), and head across the street to enjoy them with a glass of cold cider at Black Apple. I promise you won’t be the only one there stuffing your face with delicious dollar tacos.

Another Springdale favorite, Taqueria Guanajuato is one of those great family establishments you just feel good supporting. The taqueria was founded by the Morales family, born of the matriarch’s desire to bring her Springdale community delicious family recipes.

The tacos at Taqueria Guanajuato come topped with cilantro and onions, and I’d recommend throwing on a little bit of the green sauce from the table, too. You’re not going to get just one kind of taco here. Get a few. I mean, why not?

Start with the asade (grilled steak), al pastor (marinated pork) and the alambre (ham, bacon, beef, cheese and pineapple). If you’re feeling frisky, get the cabeza, Spanish for beef head. 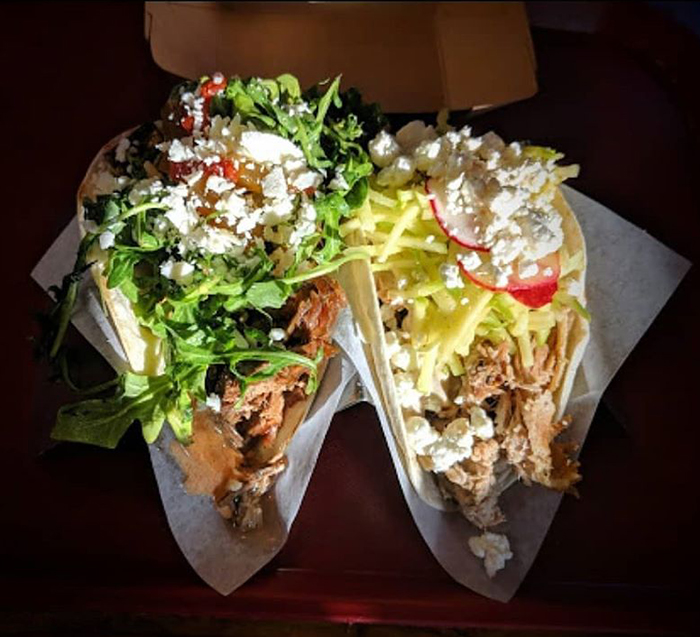 I’ve seen TrickDilly’s tacos described as “fancy pants.” One might also call them wild, insane, “who-would-put-that-on-a-taco?!” — but most importantly, delicious.

This taco hotspot also got its start as a food truck way back in the ancient days of 2014. The goal? Tricked-out tacos that combine all sorts of flavors for every would-be taco fan. In that, they succeeded.

The TrickDilly crew traded their four wheels for four walls in 2017, and they haven’t looked back since, still serving up some of the craziest dishes that just so happen to be on tortillas. We’re talking Korean barbecue, buffalo chicken breasts, Adobo chicken, General Tso’s chicken, shrimp and grits … All in taco form.

Stop me if you’ve heard this before: Don’t get just one type of taco. With a list of 15 different varieties, you’d be foolish not to try at least three.

Probably Fayetteville’s newest Mexican restaurant, having opened in January, Tula is among its finest. This modern, fancier-than-most spot on the downtown Fayetteville Square has a lot of traditional, celebratory Jalisco, Mexico, dishes on its menu, like mole, pozole, arroz a la tumbada and a whole bunch of other dishes that you may have never had but should definitely try.

Tacos at Tula are a little different than anywhere on this list. These tacos al carbon come deconstructed. That’s right, build your own tacos. And I like that.

When it comes to your table, the tacos al carbon features any one of five key fillings — asada, pollo, al pastor, vegetables or pescado. The dish also features roasted peppers, salsa, bacon pinto beans and their famous house tortillas. And when I say famous, I mean famous. The chef that helped Tula develop its menu has a tortilla recipe that’s older than most countries, including our own. He’s cooked them for presidents. So, at Tula, you can essentially eat like a commander in chief.

Springdale is known throughout the region for its rich Mexican heritage that’s resulted in a number of incredible Mexican restaurants, grocery stores and more. I realize — and I know the Northwest Arkansans reading this have too — that this entire Taco Tour could have begun and ended in Springdale without stepping foot outside of the city’s limits. So, I offer you a freebie: The original Springdale Taco Tour.

This self-guided tour of some of Springdale’s best taquerias is not my own. I’ve borrowed it from Team Springdale, a group of folks who love their hometown and have worked hard to showcase it to the world. Once you’ve made your way through the Northwest Arkansas Taco Tour, and you’re hungry for more, I challenge you to take the Springdale Taco Tour. When you visit each spot, take a picture and post it on social media with the tag #SpringdaleTacoTour. It’s their thing, and you could even win a prize. 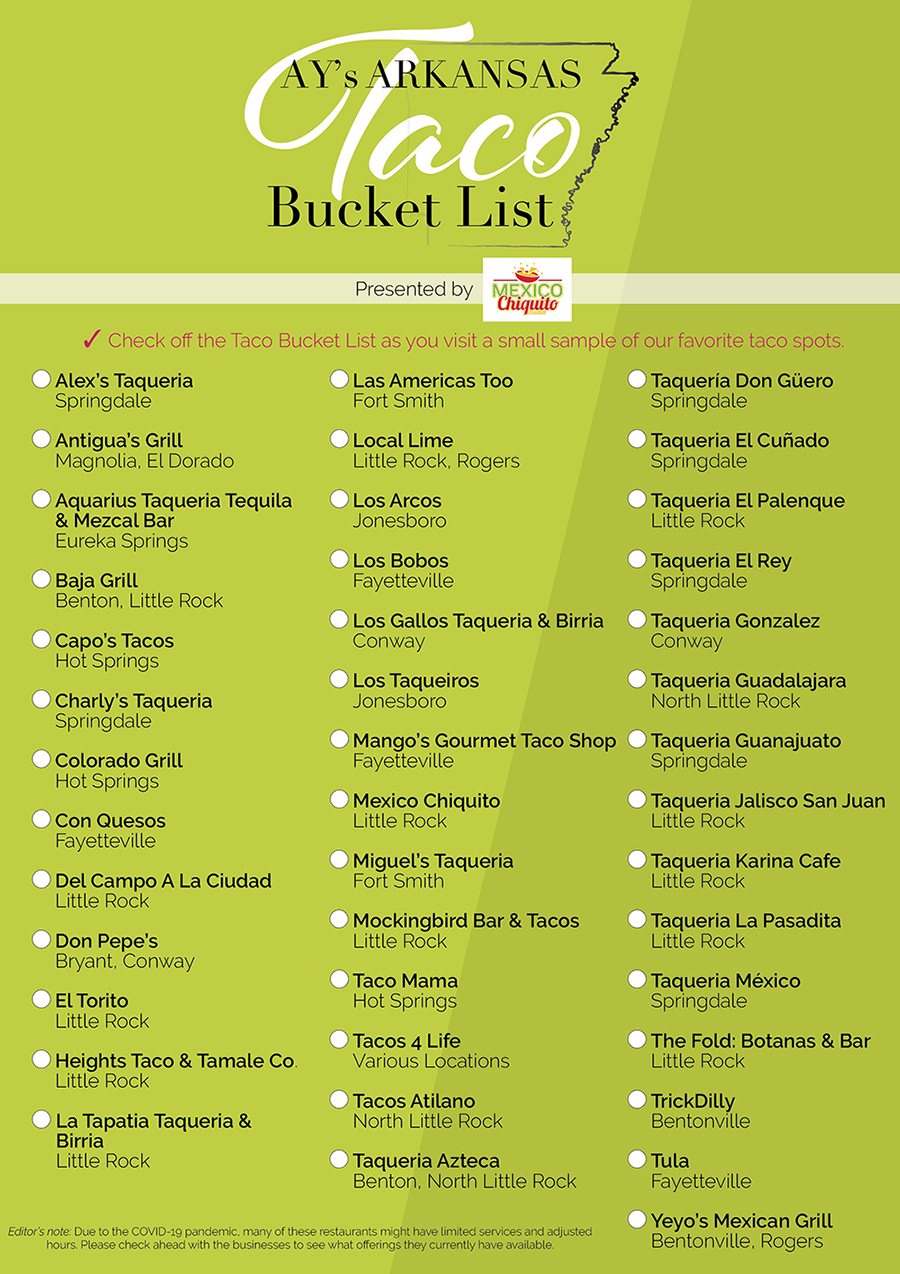