The Time of the Preacher 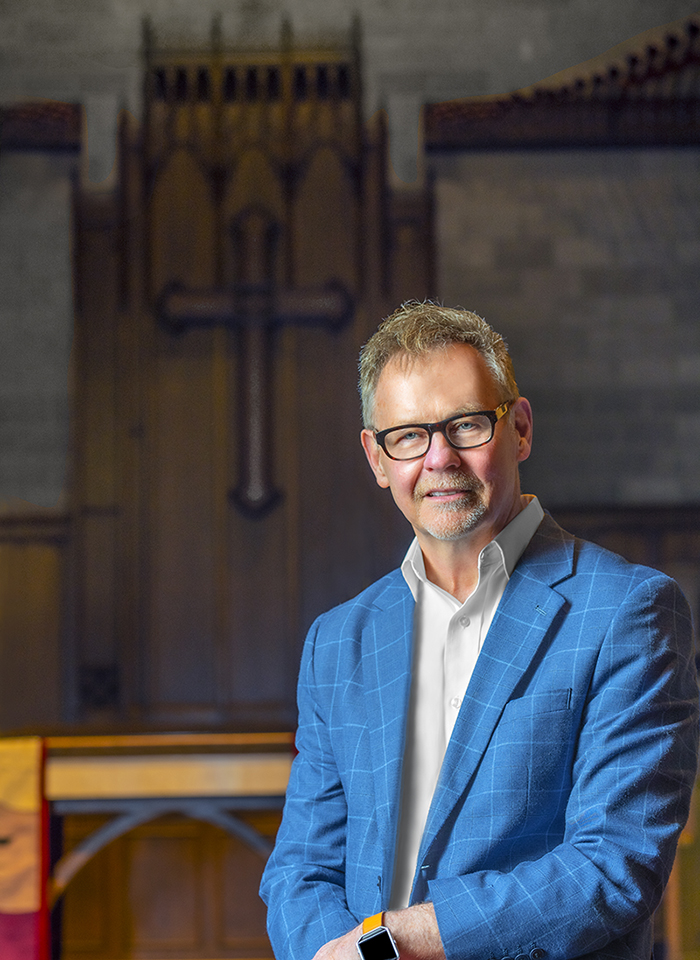 Britt Skarda shifted in his seat as the old man up front uttered a stream of prophecy. He took a long, uncomfortable breath. Unsure what had brought him out to this storefront church to begin with, he’d only become more ambivalent as the night had worn on.

This wasn’t his brand of church — fundamental and charismatic — yet he felt drawn to be here, grappling as he was with his own questions about what God was trying to tell him, show him about his life. But reflection and discernment hadn’t yielded any answers yet, so he thought maybe a change of scenery would.

Bemusement gave way to squirm when the old man started making his way through the crowd. As he did so, he’d touch one person on the head, another on the shoulder, and to each, he’d impart some nugget of spiritual direction. Skarda, praying though he was to be passed by, was a beacon in the crowd.

“You will be a great warrior for Christ,” said the preacher, hand on Skarda’s shoulder, the words searing his mind.

“I think it raised the eyebrows of everyone in that little Pentacostal church that this cigarette-smoking Methodist got that message,” Skarda says today, with a laugh. “And it sure threw me.”

Skarda sits in his office amid stacks of books and other menagerie to be packed and taken into retirement. There’s plenty left; the crosses adorning one wall, the silent alb of his station suspended on a door in the corner, more books on shelves. The 66-year-old is not much longer for the role of senior pastor here at Pulaski Heights United Methodist Church, but the process of boxing up 33 years of ministry — as with the process of retelling them — is deliberate and thoughtful.

“I have felt really blessed in that I was a Johnny-come-lately,” he says. “I had friends who went to college, went to seminary, came out early 20s, and they were serving churches. I came in at the old age of 33, which now seems like a baby, with three kids and a station wagon.

“I’ve been able to serve some of the really great Methodist churches in Arkansas. I’ve even had a couple of invitations to go out of state and chose to stay here. I felt really blessed, and I felt that I’ve been in that position because God wanted me to say something, to be there.” 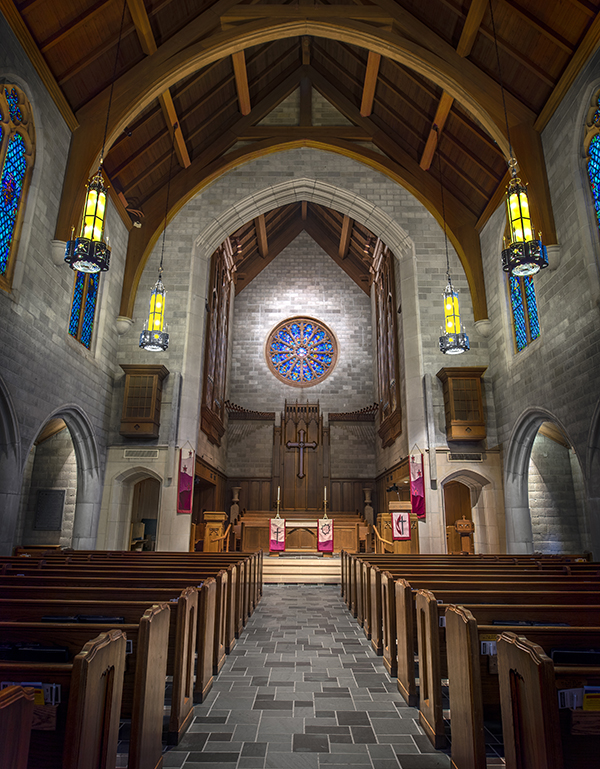 Skarda was born in Des Arc in a Main Street mercantile store-turned-hospital that was once owned by his great-grandfather. He attended the University of Central Arkansas where he earned a degree in English with an eye on law. Two days of classes at the University of Arkansas School of Law were enough to know that wasn’t his path, and he returned to the Delta to tend the family rice and soybean farm.

It was idyllic; the farm was lucrative, and he and wife Karen welcomed two beautiful daughters into a massive old restored farmhouse. Yet something in him called out for more.

“I began to sense that there was something else in my life that was not farming. There were wonderful things about that, but it just wasn’t fulfilling,” he says. “I became more and more engaged in the life of the Church.” 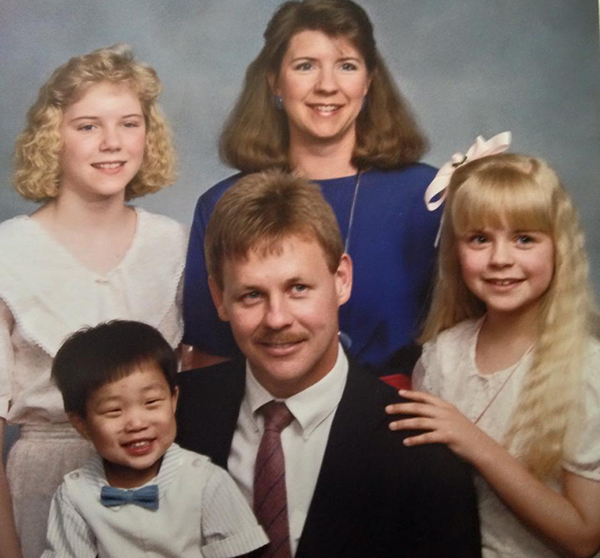 The Skarda family, from the 1989 PHUMC directory.

Despite having grown up in a household indifferent to religion — neither his father, a Catholic, nor his mother, a Methodist, did much more than drop him off to Sunday services — Skarda found himself drawn to various ministries and volunteer roles.

“I joined the choir. I cooked for the men’s breakfast. I was the volunteer youth director. I was the Sunday school superintendent. I sort of just did it all,” he says. “And I had this increasing sense that God was speaking to me and calling me and that came in a number of ways. It came through, literally, from other people saying ‘Have you ever thought about this? We think you might be called to ministry,’ including pastors.

“It meant sleepless nights. It meant changing my world; it meant uprooting my family and selling my home I thought was our forever home — where I thought our daughters would walk down the staircase on their wedding day. It was a lot of struggle.”

Eventually, Skarda could no longer deny what his heart was calling for. The family sold the majority of their possessions and set up housekeeping in a 900-square-foot triplex across from a finishing plant outside of Durham, N.C., where he began three years of graduate studies at Duke University. 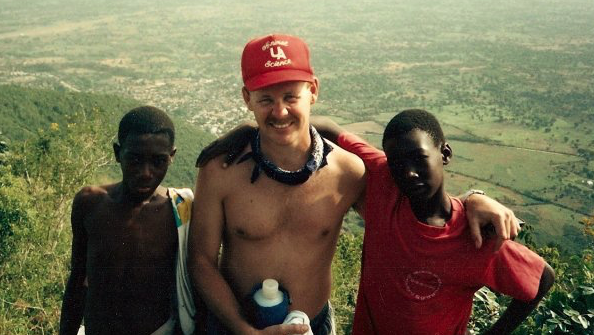 “I went to my professor saying, ‘Am I cut out for it?’ He said, ‘Believe me, Britt, you’ll be here at the end.’ And I actually made an A in the course.”

With graduation came his ticket home, assigned to shepherd two small churches in the south Arkansas towns of Bearden and Thornton, a period he calls “remarkable.”

“We come back to Arkansas with two little girls and a little boy (adopted son Peter, from Korea) for an annual salary of $19,000,” he says. “It was a time of learning to tighten your belt and do what you had to do. I don’t think our family went to a movie over a two-year period, but we had loads of fun. It was a community where the kids could run wild.”

Though his were small congregations of modest means compared to other churches in town, no flock was richer in grace. When Skarda was asked to preach a funeral for a congregant whose brother had died of AIDS, mourners packed the place, including many people themselves in the grip of the disease. It was an unusual scene for most traditional churches, particularly in small-town Arkansas.

“I remember that time as a real growing thing for that little church,” he says. “I still remember all those women had a meal spread for this little group with the best china, the best everything. This wasn’t paper plates and plastic cups. This was the real stuff. It was sort of a picture to me of how the Kingdom should look. It was just a powerful moment.”

Every stop after that, he grew similar fruit. His first stint at Pulaski Heights as associate pastor, he established the first mission trip, a ministry that continues today. In Otter Creek, the congregation doubled. In Springdale, he spent 10 years showing an affluent congregation the difference between being wealthy and rich.

“I was leaving [Springdale], and they had a big party for the community and people came in who were needy and they offered haircuts and they provided backpacks,” he says. “Literally, when they came into the church that day, it smelled different. I went up to them and said, ‘I know this is a stretch for this privileged congregation,’ and they said, ‘No, you taught us to be this way.’ So that was really good.”

As he winds down a decade in Little Rock, and with it, this chapter in his career of ministry, Skarda is gratified by all that’s been done while still keenly aware of how much work remains. He leaves at a time of schism in the United Methodist Church, a division over LGBTQ rights including marriage and ordination that most expect to split the very institution apart.

“I am eighth-generation Methodist, and I think what I feel more than anything right now is an overwhelming sadness,” he says. “I’m not surprised we’re in this situation, every denomination has been dealing with this. We’re not alone. We’ve got good company, and we’ve got those who have gone before us and have experienced it and divided and split.

“I guess for me, at the core is the nature of Christ. I’m a red-letter Christian. I really follow the red-letter words of Jesus, and if they counteract anything else, I go with Jesus. So, I feel like, at the core of who Christ was, it was about love and acceptance and inclusion and grace. I think in a lot of this, I’m seeing some corners of the Church where there’s grace absent, and that’s the painful part.”

“I understand both sides of this issue, I really do, but grace, should always be present. I see much grace out there, but I see a segment of the Church that has forgotten grace and it’s more about law.”

At that, Skarda folds his hands and smiles a gentle, wistful smile. Everything he has done in 33 years — every sermon, every summons, every stand — he did in the authentic belief that God led him to do it. It was a demanding journey to get here, but one worth taking, he’s convinced. And this next part, the walking away from one life and into who knows what new one, is no different.

“I’ve always been very interested in the underdog. I’ve always stood up for them, whatever it is, whether it’s socioeconomic, sexual preference, whatever. I just always stood up for that,” he says. “Now, every indicator, everything I feel, is that God’s pleased with this, that it’s okay. But, I think God also has something else in store for me, and I think I have to set this aside to do the other.

“I’m part of a country that’s very troubled right now. I’m part of a denomination that is embattled. I feel like if I step in a different place maybe my voice will be heard even more.”

READ MORE: They All Said, “Amen”