The Time to Thrive 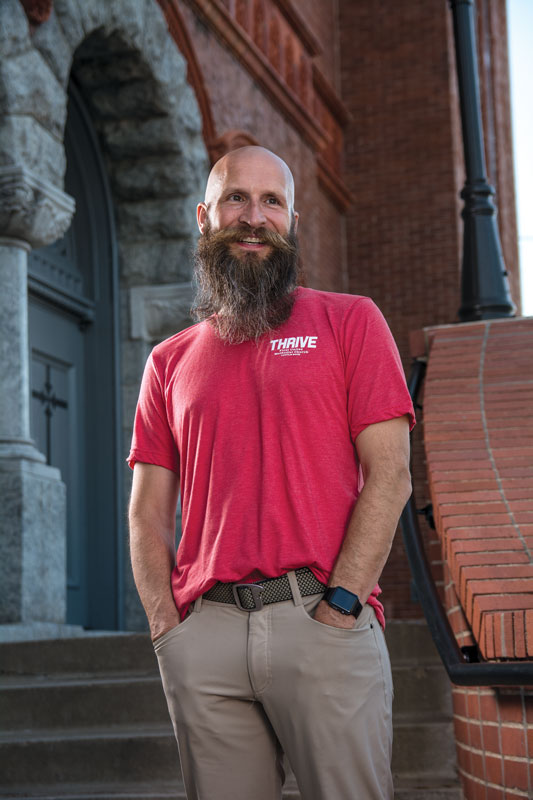 [dropcap]S[/dropcap]ince the late 1800s, the First United Methodist Church (FUMC) of Little Rock has been a staple in the downtown area. Over the last century, many houses of worship have moved away from the city center to the outskirts and the suburbs, but FUMC remained steadfast. Still, in the 21st century, with downtown environments evolving through renewed development and the competition of a vast amount of religious institutions, the congregation has done some soul searching to figure out how to reinvent their mission for the modern age.

The church’s vision statement is “being good neighbors to make Little Rock a place where children thrive.” Pastor David Freeman says, “It means more than just location of our building. How are we a part of the life of downtown and reaching out to people who live and work downtown or live downtown but don’t have a home? Our location is important to us not because we have a pretty building and bustling area, but we feel that this is where God has asked us to serve.”

For Freeman, heading up FUMC Little Rock has been a lifetime in the making. This was his home church growing up and his great-great grandfather was the pastor long ago. In the 1940s, his grandmother worked there. After graduating from Centenary College, Freeman served as the youth director before departing for seminary at Emory University. And after a 12-year stint at FUMC in Springdale, Freeman returned to Little Rock, and with the help of his congregation, decided it was time for FUMC Little Rock to THRIVE.

The acronym THRIVE stands for “Trust, Health, Relationships, Imagination, Value and Education.” This isn’t just a catchy slogan, but the guiding principle for a variety of programs for youth and adults in the downtown community.

“We believe those are the things that all children of God need to thrive,” Freeman says. “We are designing and engaging in ministries that make those things possible for people.”
To address the needs of children, FUMC is partnering with some elementary schools to conduct mentoring and tutoring, along with helping the teachers in different ways. Freeman feels that fostering these relationships with children and educators can build trust and make them feel valued. He says, “Children do well when they have a positive adult interaction. We want to be those adults for students. Mentoring and tutoring are ways we can do that.”

The church also wants to help children encourage their creative side through First Art, with musical education and instruction and visual-art instruction for students. The church plans to add dramatic-art instruction in the future so kids are using their imaginations to explore the arts. Many of the young people attending are on scholarships and would not have access to such programs otherwise.

Another upcoming project is to create an advocacy and public-witness team in the church where people would engage in actions to change public policy and advocate on behalf of children in Little Rock, Arkansas and the world. The primary emphasis is on education in Little Rock, as it is the avenue of education for a majority of kids and the church believes that a high-quality public school system is important to help impart the healing within the community.

“There’s been so much brokenness in schools, and Little Rock schools have been used as a pawn by politicians for a long time; it’s still happening,” Freeman says. “It’s time for the whole community to get behind schools and fight for that. We want to be engaged in the educational system to work with policy makers on behalf of kids, because transformation in communities doesn’t just happen through hands-on action but changing the system as well.”

Freeman also cites gun violence in Little Rock as an alarming issue that prevents the city from being a safe place for kids. The church wants policies that reduce gun violence, whether through direct engagement of violence through criminal justice or fighting poverty, which is often linked to violence.

Along with violence, hunger is a product of poverty. Freeman cites statistics showing that one in five children in Arkansas are hungry. He notes that the church cannot fix this problem solely by giving out free food through various ministries it supports, but it will require civic engagement with lawmakers as well.

One program that has helped the church reach families facing food insecurity is Friends and Neighbors Network (FANN). According to Elaine Bultena, FANN coordinator, the idea originated in the fall of 2015 after reading the book Toxic Charity by Robert D. Lupton, about how well-meaning people and their ideas of mission are actually harming those they’re trying to help. Bultena states that FANN is not a food pantry — it’s a “hand up, not a handout.” Members help by unloading food from trucks, sorting and distributing it. To qualify, members must meet The Emergency Food Assistance Program guidelines. FANN started out with 10 families. Participants are required to undergo an orientation process that details what’s expected of them, how much food to expect and their commitment level. Then they sign a member agreement and pay a small fee. Orientation occurs every three to four months, adding four to seven households at a time — a purposeful move to develop a sense of community among participants. Currently about 25 households from the low-income area in downtown Little Rock are members of FANN.

“At the end of the day, it’s really more about building community rather than people coming to the church and being handed food and told ‘good luck to you, see you in two weeks,’” says Bultena. “Everyone is involved. We have relationships with the members and it offers the members accountability and also preserves their dignity. All the members are committed and don’t have a hodgepodge of people coming weekly. Everyone has their own special job they do to make things run smoothly. We try really hard to make it their program with their own steering team they elect and make their decisions. They run it — we are facilitators and volunteers.”
FUMC offers other many other programs for the community and members. Along with schools, they partner with other social-service nonprofits. According to Freeman, this service is not designed to increase membership and church coffers, although he is happy if people decide to come to the church. At the end of the day, THRIVE is a calling from a higher power, one that the congregation is happy to answer.

“Christian faith is not just about securing our eternal destination,” says Freeman. “When Jesus preached eternal life, that eternal life begins in the here and now. Jesus says the best way to love God is to love the people around you. Our church is not perfect and we are not doing any of this perfectly. We see it as a journey and we are truly trying to take the next best step. We aren’t patting ourselves on the back. We are just saying, what is the next thing we can do to make Little Rock a place where children thrive by God’s grace?” For more information, visit fumclr.org.