The War of the Roses: Mayflower Couple Faces the Fight of Their Lives 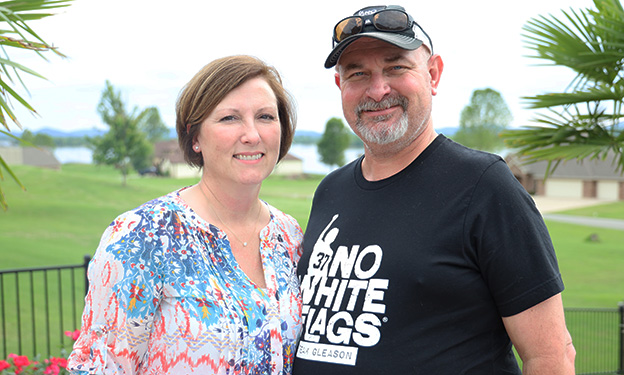 There are better-known subdivisions in Arkansas, but none prettier than River Plantation near Mayflower. Stately homes with big yards line this quiet neighborhood, looking out over stunning views of the river and emerald foothills in the distance.

But ask around and you’ll discover there’s a lot of grit underneath the polish here. Six years ago, this was tornado alley, knocked flat by an EF-4 twister that carved a path of mayhem clean through to Vilonia. Here and there, you still see a naked foundation pad but mostly, the residents stubbornly pulled themselves out of the rubble and rebuilt.

“It was sucking me out of this hallway when it hit,” said Darren Rose, jerking a thumb over his shoulder as he took in the view from his pool deck. “We come out and it’s all gone. Just to rebuild after the tornado here six years ago changed me a lot.”

“I just realized that nobody is guaranteed tomorrow.”

Darren, along with his wife Holly and their three boys, felt the full measure of that epiphany 16 months ago when he was diagnosed with amyotrophic lateral sclerosis. Sometimes called Lou Gehrig’s disease, ALS is an as-yet incurable neurodegenerative condition that breaks down nerve cells, causing muscle weakness and ultimately failure of body systems.

“I know I had symptoms a year and a half, maybe two years prior to when I got diagnosed on January 24 of 2019. Weakness, a lot of hand tremors,” Darren said. “My left foot is a drop foot. I had back surgery in 1999 so I had sciatica pain there and I kind of thought it was my back surgery leg acting up. I didn’t have a whole lot of feeling in that leg anyway, I just noticed my walk had changed.”

Darren said given the length of time he’d dealt with symptoms, the diagnosis didn’t come as a surprise. But the finality of being told he had “The Beast,” as his physician called it, hit hard just the same. So, once the shock wore off, the couple started hitting back.

“Darren’s always been laid back and easygoing and light-hearted. I think that attracted me to him because I’m a Type A personality. I’m high-strung,” said Holly, a sales rep for THV11. “I think he balances me out and reminds me just to take a breath. We’ve been married 20 years, and over those years, I’ve taken that from him. I’ve calmed down a little bit.”

“At the same time, I’m a fixer so I immediately started researching where are we going to go, who’s the best doctor, where’s the best place to go?”

Holly’s digging led the couple abroad for experimental treatments and to reach out to other patients for suggestions on supplements. It also led her to The ALS Association of Arkansas where the couple began to connect with other families in the same fight.

“Just through our local support group here, I’ve met several PALS (Persons with ALS) that are just great,” Darren said. “Unfortunately, several people that I’ve met have passed away and that’s what’s hard, when you lose people when you don’t expect it.”

“That’s the shock and awe factor of it and that’s where everybody’s journey is so much different. It can be so fast for some and then slow for others. I set a goal; I was hoping to still be walking after a year. I’m setting my goal for three years now.”

ALS is as rare as it is devastating, with fewer than 20,000 cases in the U.S. each year, per the Mayo Clinic. At any given time, the ALS Association of Arkansas follows approximately 150 people officially diagnosed with ALS statewide, but the number is likely higher than that. Typical life expectancy is two to five years with a 100 percent fatality rate.

Staring statistics like that in the face, it’s easy to see why families like the Roses across the nation are screaming bloody murder at the glacial pace of the FDA in approving new drugs.

“There are multiple treatments that are stuck in FDA trials that we should have access to,” Darren said, the ire rising in his voice. “Look at COVID-19; they’re approving stuff for COVID after three months and COVID’s two percent fatal. We’re 100 percent fatal.”

“But it’s always, ‘We’ve got to make sure it’s safe.’ They’re protecting us from taking something that might kill us. Well, we’re already going to die; 90 percent of us, two to five years is our life expectancy. I’ve got three and a half years of symptoms, probably.”

“We were having a conversation yesterday about this lady who has ALS in a state where you can actually end your own life if you choose to through medication,” Holly said. “So, the end of life drugs are available and you can get those no problem if you live in one of those states. But you can’t get a procedure that might help you.”

Except in certain situations, it’s hard to detect the disease in Darren. A brace on one leg is the only tell that something’s amiss and to most people, that’s too subtle a hint to equate with ALS. It’s another challenge, Holly said, to helping people understand the disease.

“I think that people look at Darren and they think there’s nothing wrong with him. But they don’t see the behind-the-scenes struggles,” she said. “He’s so tired. I help bathe him now because he can’t lift his arms to do that. There are so many things that people just don’t understand. But he always puts his happy face on and smiles.”

Before the disease forced him to the sidelines, Darren spent 26 years running his own AAA insurance agency in Conway, so his default is to consider statistics and probability. Given that, he’s acutely aware of time as a finite resource. But while he can’t know exactly the years the Lord’s allotted him, he’s committed to fighting ALS down to his last breath, with Holly at his side.

“I went to Dallas to see a neurologist to try to get in a trial,” he said. “We were talking and he goes, ‘Unfortunately, this disease, we call it the good ol’ boy disease. It doesn’t affect the sorry son of a bitch. It affects good people.’ And it really does.”

“I have bad days; I’m not going to lie. But everybody takes the grieving different. Some people shut off. That’s the fight or flight. I’m not the flight. I’m a fight.”

May is ALS Awareness Month. To contact ALS Association of Arkansas for services, to make a donation, or to learn more, please visit webar.alsa.org.