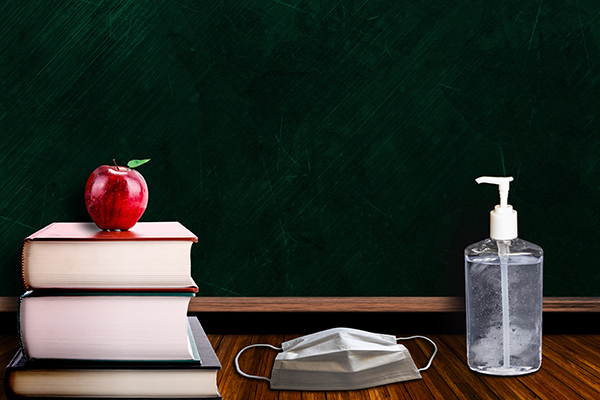 Kristy Dunn makes the rounds through the polished hallway of St. Theresa Catholic School in southwest Little Rock. Nearing the mid-term break, the concrete-block walls display the radiant artwork that will hang here most of the term. She passes each classroom door as quiet and unseen as an autumn breeze.

It’s a regular part of Dunn’s day, this stroll. As principal of St. Theresa’s, she’s always heading this way or that, eyes and ears tuned to detect mischief, returning a hug from a line of students trouping by or just leaning on the wall next to a doorway to listen to minds opening.

But this year, the most challenging of her educational career, the walk is different. Everything is too eerily quiet — as if COVID-19 has clamped a muzzle on the student body. The familiar places look, feel, even smell different. And off the start, she wondered if the spirit of the place would be different too.

“Week one was super quiet. Everyone was getting adjusted to masks and what their teachers were going to expect,” she says. “I really used week two as my litmus test.

“If students aren’t laughing, if they’re not engaged and having conversations that aren’t just academic, and they’re not talking about what they’re doing this weekend or joking, then we knew that whatever we were doing was all wrong.” 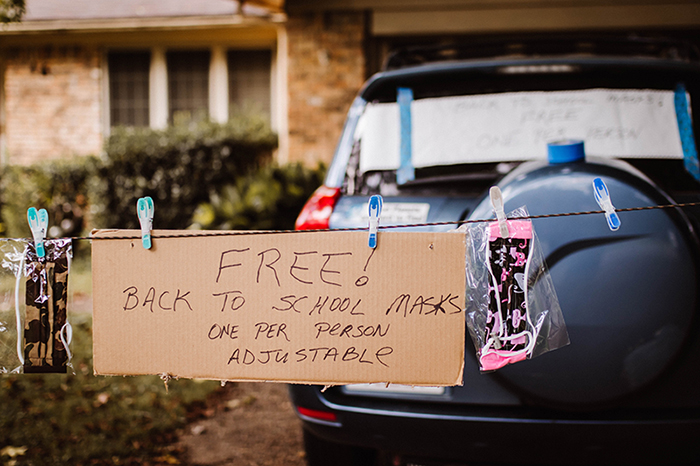 Free masks hang available on a clothesline in Cabot. (Photo by Jordan Knight)

The COVID-19 pandemic has given America new waves of heroes, from front-line health care workers to first responders to Main Street businesses struggling to stay alive. As the new school year dawned, teachers took their place on that list. Following a tumultuous summer break, whereby many adjusted to new educational pedagogy and delivery systems and assessed the risk of infection to themselves and their families, many showed up to face the toughest year of their professional lives.

“We told our teachers before the school year started, we were very honest with them,” says Meghan Ables, a 17-year teaching veteran and former Arkansas Teacher of the Year who is in her first year as assistant principal of Park Avenue Elementary in Stuttgart. “We put up the slide on PowerPoint, ‘I’m so tired, my tired is tired.’ I told them, ‘This is what this year is going to feel like.’

“‘Let’s talk about what reality’s going to look like. This is going to be the most exhausting year of your career, probably.’ We told them they’re going to have to take care of themselves mentally and physically.”

According to industry statistics, teaching is already one of the most stressful professions there is, particularly in the public school arena. Long hours, comparatively low pay and, in many cases, lack of resources or parental support  had resulted in a trend of educators looking for a career change. According to an April study by the Economic Policy Institute, the 2017-18 school year saw a teacher shortage of 110,000, whereas just five years prior there was no shortage reported at all. The report estimated 14 percent of teachers are either leaving their school or departing the profession altogether. 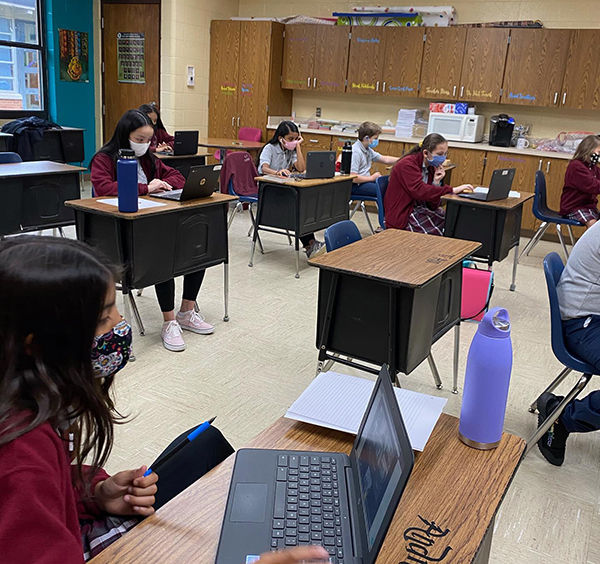 Students carry out their studies in masks while socially distant. (Photo courtesy of St. Theresa’s)

The emergence of the coronavirus has only added to the mental and physical toll many teachers are experiencing. This summer, results of an April survey by the University of Phoenix and Edelman Intelligence showed just how overwhelming teachers’ concerns are. Asked to describe their current mental state, respondents reported as “somewhat” or “extremely” uncertain (81 percent), stressed (77 percent), anxious (75 percent), overwhelmed (74 percent), sad (60 percent) and lonely (54 percent).

Ables says the tail end of her last year in the classroom, where she taught 11th grade English, gave her a taste of teaching the virtual environment, an experience that gives her empathy for the extra work her faculty puts in today.

“I think from the outside, people just saw it as teachers at home working their regular hours. No. Not at all,” she says. “The busiest part of my day was in the evenings when I could get my kids to do their work and help them … By the time you get up and get your own kids logged in to do their work and then, to the end of the day, it was probably 9:30 or 10 at night. Sometimes it was later. The days were very long. It was probably the hardest time of my life as an educator.

“Now, think about being a new teacher in this pandemic and the support that we’re needing to offer them. They’re not only learning how to manage a classroom and build content and build relationships; they’re also having all of these other pieces in the mix.”

Ables says school administration has paid close attention to supporting teachers from the get-go, not only giving them the tools they need to balance online and live classrooms, but to manage the physical and mental demands of their profession as well.

“I’ll be honest, a lot of teachers attended their first-ever Zoom session through our Zoom meetings for teachers. They were then, all of a sudden, expected to host their own sessions,” she says. “Usually, when you’re in the classroom, you can practice it and see how it works with the class, tweak it and fix it. But there was none of that. It was like, ‘OK, we’re going to host a Zoom. I hope everybody shows up.’

“I think our teachers handled it with grace. I mean, they didn’t have a choice, they had to. But, it’s taken teamwork and teachers that don’t have that teamwork atmosphere, I don’t know how they’re surviving. I really don’t.”

Jayme Nyborg, a Family Consumer Science teacher at Cabot High School, can relate. Even though she’s a 13-year veteran of the classroom, preparing for the current school year made her feel like a rookie. 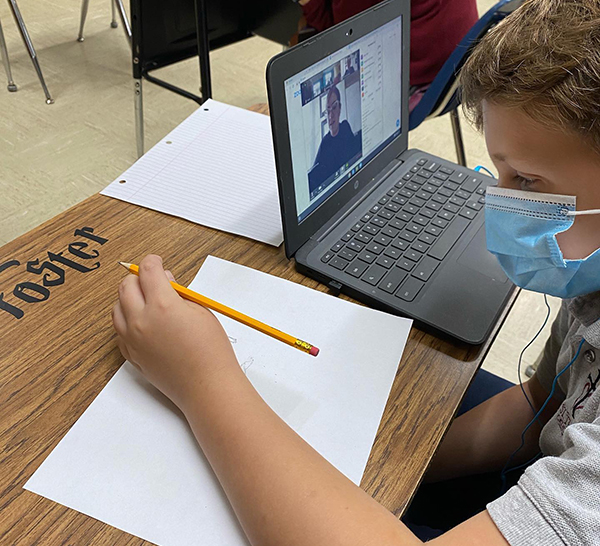 Both students and teachers have adapted to virtual lessons. (Photo courtesy of St. Theresa’s)

“For sure, brand-new teacher all over again,” she says. “I spent a significant amount of the summer preparing for what I thought were things that were going to be helpful. But then, we started, and it was just like there were so many other things I could have done to be more prepared. I just didn’t know what they were.

“Three of my classes of the day are about communication, conflict resolution, learning how to talk to people and handle different situations. It’s a lot of group work — discussions in groups, team building activities. A lot of those I’m not able to do anymore. I’ve had to adjust my curriculum. Hands-on, right now, is not what we can do.”

Nyborg says such restrictions are not only challenging in the area of content delivery, but relating to students online also dilutes the one-on-one relationship building teachers develop with their students. This is particularly distressing in situations where the teacher might be the first or only person to notice a kid who’s struggling in areas outside of school.

“That was my main concern, ‘How am I going to build relationships with those kids online?’” she says. “For me, relationships are first, content is second; the better the relationship is, the more the content will be absorbed, in my opinion. I’ve had assignments that have allowed me to get to know the students a little more, but [online], sometimes they’ll have the blinds open behind them with the sun coming in and there’s a shadow on their face. I can’t even see them; I can’t make out the features on their faces.

“In-person, even though it’s more difficult and we have to be careful at keeping appropriate distance, you can still notice those things about your students. It took a little longer this year to make students feel comfortable. It was like they were less likely to talk because they had the masks on and it’s hard to understand people. But I think we’re still able to notice things and check on them and know when they’re having a bad day. We know their demeanor and their personality and we can notice those things.”

Back at St. Theresa’s, Principal Dunn not only balances the challenges facing her faculty, but the student body itself. About 85 percent of students here are minorities; around 65 percent qualify for free and reduced lunches — which is a nice way of saying poor. Many are not able to afford the technology to learn remotely and, in many cases, the student is the only one who speaks English at home, so asking parents for academic help is a non-starter. It’s live instruction or nothing.

And so from a line of cars that appears daily, parents drop children off, glancing over at the sentinel St. Theresa Catholic Church right across the parking lot as they do so. “Watch over us, Lord,” they whisper. Dunn, who knows most of those families don’t have health insurance, offers that same prayer, multiple times a day — both for the children and the faculty weightily entrusted with their care.

“Teachers are always, always flexible,” she says. “Yes, they like a plan and yes, they like structure. But boy, they know, whether it’s an assembly or a fire drill, they are always flexible. But this is like living week to week. They have just had to be so understandingly flexible and I’m very proud of them for that. I’m also trying to learn from them, because it’s definitely something that I could be better at, as well.”

The next classroom she passes, Dunn hears giggles. Around the next corner, first graders singsong a chant to reinforce some memorization, disintegrating into laughter. The principal smiles, drapes the happy echoes about her shoulders, and walks on.