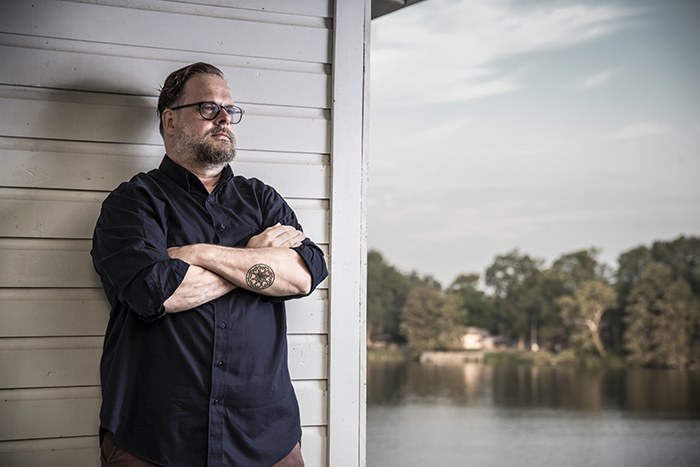 From the sandy reaches of the Middle East to the hidden depths of the Amazon, there’s always something horrifying to be found. But it isn’t limited to exotic locations; horror can find you at home. Even in Arkansas, horror is only a step away.

Everyone experiences it at some point. That tingly feeling on the back of your neck when scared? That’s your fear, bubbling up from within, prompting a physiological response, enabling you to fight or flee. Some people don’t do either, but rather, court the feeling, seeking it out through thrilling experiences or through books and films.

Beyond the sunny days, mint juleps and sweet tea, dark things indeed lie in wait in the South.

The landscape is marked by a history of racial injustice and other horrors — the perfect place for a writer to mine for stories.

Little Rock native John Hornor Jacobs has made a career of courting horror, taking those dark things — the stuff of nightmares and fever dreams — and transforming it into finely wrought, haunting stories. With more than 10 books published, he has become one of the foremost horror writers of his generation. 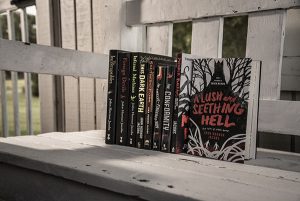 Starting with his debut novel Southern Gods, Jacobs has written in a range of genres, from horror to fantasy; and formats, including novels, novellas and short stories. But his oeuvre is marked by a cosmic horror that transcends the settings of his stories.

“I’ve often said that horror is the ur genre, the first story form,” Jacobs says. “When humankind sat around the fire and told stories about monsters beyond the firelight, they did so for a very real reason — to warn of the dangers lurking in the woods, in the dark, back when we weren’t the dominant predator on the planet. And through the millennia, those cautionary tales wormed their way into our genetic memory.

“Horror film and literature pulls an interesting trick on its audience: Horror winds up making people feel safer, rather than discomposed and fearful, because it allows us to express our fear in healthy and compartmentalized ways. There is a logic and order to horror; for the most part, wrongs are righted, evil is defeated (enough to end the film or book, though maybe not enough to preclude a sequel). There’s often a narrative sense of justice in horror — while some might perish in strange, unnatural, even gory ways, the truly vile always get what they deserve. And that is kind of nice.”

Growing up in Arkansas, Jacobs was a bookworm, devouring classic horror and fantasy works like The Hobbit and The Lord of the Rings by J.R.R. Tolkien. But one of the formative works was Dracula, which his father allowed him to watch when he was young and was one of the first books he read. “Those bits of fiction have followed me throughout my life and influenced my writing, my taste for entertainment and literature,” he says.

Reading led him to write his own stories, soon enough. The first story he remembers writing was about a boy who lived in a cave in the aftermath of a nuclear war and is bitten by radioactive wolves. The story was, no doubt, inspired by his fears of nuclear war, fueled by movies like The Day After. 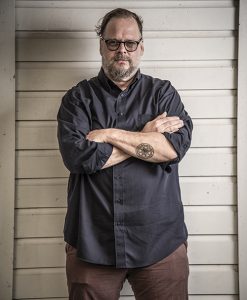 Jacobs went to Lyon College in Batesville for his undergraduate degree, followed by the Dallas Art Institute to earn an associate’s degree in computer animation and multimedia. All the while, he was practicing his craft — writing short stories and expanding his readership.

Horror and fantasy novels gave way to more “literary” novels in his 20s. Novelists like William Faulkner, Flannery O’Connor, Barry Hannah, William Gay and Charles Portis became Jacobs’ “polestars” during this time. Under these influences, he wrote rural noir short stories about a family that fights dogs and sells drugs but never published them.

“It was ‘rural noir’ before there was a genre like that out there,” he says. “Because I didn’t know what the hell I was talking about, I never did anything with them, and they weren’t very good, though I was really trying to be a stylist — deep in the shadow of Mt. Faulkner. I still have them somewhere.”

Like a prodigal son, though, he made his way back into the wilderness of horror before long.

“I had too many influences. I loved crime and fantasy and historical fiction and all of that became jumbled up,” he says. “In the end, as a writer, everything I read ends up influencing me. From the trash to the high-brow, they all go into the experiential bin.”

Jacobs went into the advertising world after college but kept his personal creativity fired up by playing in bands, painting and drawing. He finally decided to take a shot at writing a novel.

He picked up a copy of No Plot? No Problem! by Chris Baty, the founder of National Novel Writing Month (NaNoWriMo), at a bookstore, tearing through the book. When November rolled around that year, he set out to write his first novel. By the end of the month, he topped the 50,000 goal with about 55,000 words, an auspicious start for what would become Southern Gods. Four months later, he finished the book.

It would be three years before Southern Gods saw publication. Jacobs forged ahead, writing This Dark Earth, before landing an agent and a publishing deal.

Getting published changed the game for Jacobs. What had once been a private creative pursuit was now cast out into the world, available for anyone to praise or condemn.

“Being an artist means to hazard yourself, risk part of yourself to the greater world. That’s what makes doing this worthwhile and also risky,” he says. “Writing changed for me in that suddenly this wasn’t just some hobby — with every word I wrote, there was a fairly large probability that it would be seen and evaluated. It was serious, now. And consequently, I began taking the art, and the craft, of writing more seriously.”

He slowed down his writing, taking increased care at the sentence level and working to hone each work to a razor edge before releasing it out into the world. Since his first two books, he has written a pair of trilogies, made up of The Twelve-Fingered Boy, The Shibboleth and The Conformity, and The Incorruptibles, Foreign Devils and Infernal Machines. Most recently, he has written and published A Lush and Seething Hell, composed of two novellas, and Murder Ballads and Other Horrific Tales, a short story collection.

His most recent works have pushed Jacobs into new territory while still focusing on his major themes.

Within A Lush and Seething Hell, Jacobs wrote the novella “The Sea Dreams It Is The Sky,” inspired by the overthrow of President Salvador Allende’s government in Chile in 1973, as well as “My Heart Struck Sorrow,” informed by the work of ethnomusicologist Alan Lomax.

A Lush and Seething Hell was a move to “more serious thematic material” for Jacobs. Taking material normally written about in literary fiction, Jacobs incorporated horror elements to create a wholly new creation.

Taking a “Frankenstein” approach, Jacobs throws together different genres and tropes and mixes them together to make something new. It’s a method that dates back to Southern Gods — combining cosmic horror with historical fiction and crime noir — and includes his Incorruptibles trilogy, which mixes historical fiction, horror and fantasy into a heady brew that is uniquely engaging.

For “The Sea Dreams It Is The Sky,” Jacobs took inspiration from Roberto Bolano, the late Chilean writer who chronicled the events and atrocities that defined 20th century Latin America. Bolano’s works gave him the idea of an extra-national entity preying upon a country, propelling him to do more research on Chile’s history and develop the story into a novella.

The work has paid off for Jacobs. In July, he was nominated for a World Fantasy Award for Best Collection. He will face off with some of the leading horror writers for the award.

Murder Ballads was Jacobs’ chance to publish a collection of his short stories, both previously published and new stories. The title story is a sequel to Southern Gods, providing readers with a new entry into Jacobs’ debut fictional world.

Jacobs isn’t waiting up to receive an award, though. He has had plenty of time to work during the COVID-19 pandemic, giving him the burst of energy to get some writing dome.

He is at work on a novel tentatively titled A Gentleman of Carpathia, but that title may change. Inspired by Dracula, Jacobs is, as always, putting his distinct spin on the tale. The book, he says, will draw from historical sources and feature elements of organized crime to shed new light on a familiar horror figure.

This new book will move him farther afield from the Arkansas landscapes he wrote about in his early career. It’s a deliberate move but one that has allowed him to expand his reach, both in terms of audience and personal interests.

“But for whatever reason, I didn’t want to be pigeon-holed as a Southern writer and moved to other pastures, but it happened anyway.”

No matter where Jacobs ends up setting his next books, you can be sure that something horrific will be lurking just out of sight. Until it isn’t.

• We Have Always Lived in the Castle by Shirley Jackson

• The Haunting of Hill House by Shirley Jackson

• All the Light We Cannot See by Anthony Doerr

• The Things They Carried by Tim O’Brien

• The Scar by China Miéville

The Shows Are On: Arkansas Repertory Theatre Holding Outdoor Series in 2021
May 13, 2021

Reopening Date for Capital Hotel Getting Closer
May 3, 2021
Go to Top
Never Miss An Issue!