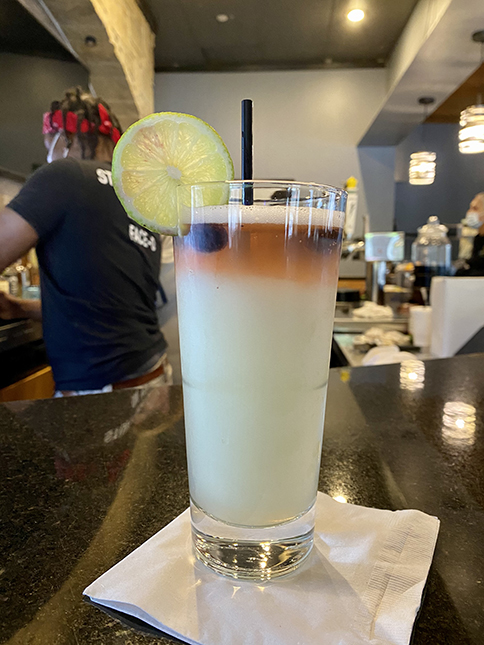 The FlywayRita from Baja Grill

What do you get when you combine Baja Grill’s frozen margarita with Flyway Brewing’s Bluewing? Answer: The FlywayRita. Well, I am pretty sure that’s the official name.

“I think I’m going to keep it the FlywayRita. I like the nod to Flyway in the name, my favorite brewery that I don’t get to enjoy brews from anymore,” says co-owner Heather Baber-Roe.

I originally thought kudos should be given to the restaurant’s staff members for coming up with this brilliant concoction, but as it turns out, this was not the case.

“It wasn’t anyone associated with Baja Grill. I was having the crew taste test different portions of blueberry purée in margaritas and just couldn’t get it right. On the same day, a guest came in minutes before closing and asked the staff to put a Bluewing float on his margarita. He was our margarita angel. I was mad I didn’t think of that but had to set aside my ego for the greater good,” says Baber-Roe.

As is often the case, I fell victim to the power of social media. After seeing a picture of this glorious drink, I found myself sitting at the bar within a couple hours. Visually stunning, thanks in large part the the blueish hue of the Bluewing floater along with a few fresh blueberries swimming near the surface, the FlywayRita is as beautiful as it is delicious. A good cocktail is about a subtle balance of flavors, and I enjoyed how the freshness and tartness of the of the margarita paired with the hint of blueberry from the pour of beer. Once it hits the table, I suggest taking a moment to admire the beauty, then give the cocktail a quick stir to really help blend the flavors. The FlywayRita packs a good punch. One should be enough, as I am also a big proponent of leaving plenty of stomach space for an order of Cuban Nachos.

While I know we have plenty of wonderfully creative cocktails throughout restaurants in the Little Rock area, it speaks volumes on just how much I enjoyed the FlywayRita because I ended up right back at Baja the following night for another one. Yes, that’s twice in two days, a rare feat for yours truly, as I really like to mix up my dining/drinking experiences. And good news for me (and you), as the FlywayRita is set to become a permanent fixture on Baja’s Grill’s bar menu.

Says Baber-Roe, “I started working on the new menus Sunday and it should be finished with them soon. It’ll be on both locations’ bar menu.”