This Side of Seven: Arkansas’ First School Shooter

This Side of Seven: Arkansas’ First School Shooter

As I sit down to write this, authorities in Michigan are sifting through the death and emotional wreckage caused by another school shooting. Four students were killed and another seven students were injured at Oxford High School, north of Detroit.

For many Arkansans, hearing about four students killed in a school shooting brings to mind Stephanie Johnson, Natalie Brooks, Paige Ann Herring and Brittney Varner. Those four pre-teens, along with teacher Shannon Wright, were gunned down by fellow classmates Mitchell Johnson and Andrew Golden outside Westside Middle School near Jonesboro on March 24, 1998. Ten others were wounded.

The FBI defines a mass shooting as a single incident in which a shooter kills four or more people. Those are the incidents that generate national attention. Those are the shootings that people remember years later. Columbine, Marjory Stoneman Douglas, Sandy Hook. Thankfully, Westside is the only school shooting in Arkansas that meets this FBI definition.

But just three months before that infamous school shooting in Craighead County, another Arkansas school shooting occurred in Lafayette County. Fourteen-year-old Joseph “Colt” Todd shot two of his Stamps High School classmates with a .22-caliber rifle. He hid in the woods and shot the students while they congregated in the parking lot before school. Both survived. The eighth-grader told law enforcement that he was tired of being bullied, although neither of the students he shot had been bullying him.

Four decades after what is believed to be Arkansas’ first fatal school shooting, David Hampton is finally ready to talk about it. 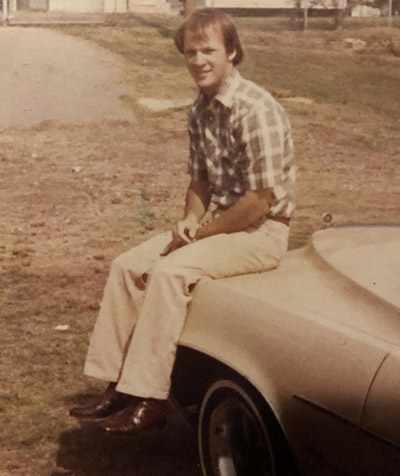 “My brother was a little bit slow developing,” Hampton tells a group of Hope police officers and staff. “He had some issues at childbirth that created some mental problems with him. And he …was just different. When he got in the seventh grade, he came to the high school, and there was a guy who began to bully him. And that was a major thing that took place, and that is what I want to talk to you guys about.”

On Nov. 30, 2021, Hampton was invited by Hope Police Chief J.R. Wilson to talk about his brother, Evan Hampton, and what happened in Stamps 42 years ago.

“He would step on his heels and push him down in the hallway,” Hampton told the group. “My brother was about [5 feet 6 inches tall] and weighed about 135 pounds. This guy probably was 225 … big, tall … big boy. He was a senior when my brother was in the ninth grade. And my brother had issues, and he talked with my parents about it, and they went to the school and said, ‘Hey, this guy continues to pick on our son, and will y’all do something about it?’ And they brought both of them into the office, and guess what they did? They said, ‘OK, you act right, and you act right, and if y’all don’t act right we’re going to kick both of y’all out of school.’ And that was pretty much it.”

“We was raised in the woods, and we would shoot guns at early ages, and he borrowed a .22 pistol that my brother (22-year-old Kenny) had, and he said he wanted to go shoot up some ammunition that he had, which was common for us. My brother was 16 years old. And he took that .22 to school one day, and he walked up behind this boy in the classroom, shot him in the back of the head, and turned and shot him two more times as he fell to the ground, and he killed that bully.”

Evan then handed the pistol to his teacher, walked to the school office, and waited for police to arrive. He was later convicted and served four years of a 20-year sentence. When he was released in his early 20s, he began experiencing delusions. He was diagnosed as a paranoid schizophrenic.

David says that when his brother took his medication, he was OK. The problem was that, more often than not, Evan refused to take his medication. And Evan also refused the help offered by his brothers and others.

“He never would get back on his medication, and he died just about a year ago,” David says. “We found him in his driveway. His house was a total wreck … nothing like it used to be. It was obvious that he was not mentally stable. Thank goodness that he never became violent again. That he never, that we know of, owned or possessed another firearm.”

David has spent his life working as a probation, parole and law enforcement officer. It is a career, he says, that was likely sparked by his brother’s life. And now, more than 40 years after Evan killed 19-year-old Mike Sanders, and more than a year after Evan’s death at age 56, David is ready to share a message about bullying. And mental health.

“We need to try and understand mental illness,” Hampton told members of the Hope Police Department. “It’s a major issue. And I know you do. You’re on the streets. You see it. You know what it’s all about. But that opened my eyes a lot to paranoid schizophrenia. What it does … what is in the mind of these people. And what can happen.”

In 1997, Joseph “Colt” Todd told investigators that students took his money and threatened him, and that teachers did nothing about it. Following that shooting, a Texarkana Gazette reporter tracked down Evan, who was then 34 years old and still living in Stamps.

From the article: “Hampton said he was home when Monday’s shooting occurred and only learned of the violence after he drove into town. These days, Hampton is a practicing Mason who focuses on being a better person by helping people. But beneath each calm, cool exterior, Hampton says, the ability to kill lurks in everyone. ‘I’m no different from anybody else,’ he said. ‘You can only take it so far and then something has to go.’”

Like most schools in Arkansas, the Lafayette County School District now has a bullying policy that is several pages long. It lists 14 examples of bullying and lays out a course of action to be followed if bullying is reported. Anti-bullying signage is to be posted “… in every classroom, cafeteria restroom, gymnasium, auditorium and school bus.”

But David fears that too many teachers, school officials and parents still have a “kids will be kids” mindset when it comes to bullying. “The rules are there, but schools ignore or pass off many cases of bullying,” he says. “Cyberbullying is major now. Mental or social bullying may be worse than physical bullying. It can lead to suicides and other issues.”

Those “other issues,” according to the Centers for Disease Control and Prevention, include, “Depression, anxiety, sleep difficulties, lower academic achievement, and dropping out of school.” And while all of these can negatively impact mental health, the existence of mental illness is what can cause, in rare cases, teens like Evan Hampton to take drastic action.

“Would my brother have ever shot this kid in school like that?” asks David. “I don’t think he would have, had he not had the mental illness. We didn’t know it was there.”

In addition to being a lawman, David is also a pastor. He has led the same church for the past 29 years. Romans 8:28 assures him that, “In all things God works for the good of those who love Him, who have been called according to His purpose.” He admits that it has been a challenge to identify any good that came out of Jan. 7, 1980.

Maybe a member of the Hope Police Department will handle a situation involving bullying or mental illness differently after listening to David. Maybe more speaking engagements will lead to a greater awareness of bullying and a greater understanding of mental illness. Maybe David’s platform and the message he shares will be the good born out of this bad.

Romans 8:28 doesn’t say the good will come quickly. It just promises that it will come.

READ MORE: This Side of Seven: Southern Heroes