This Side of Seven: Ashes To Ashes 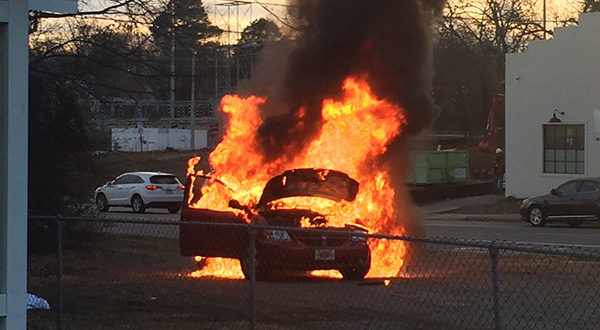 Five minutes before the flames, I was driving our 2007 Dodge Grand Caravan home from work on Interstate 630 in Little Rock.

Five hours earlier, I had been one of about a dozen vehicles inching through the drive-thru at McDonald’s.

One day earlier, that minivan pulled a U-Haul to Fayetteville, jam-packed with all of our daughter’s worldly possessions.

One week earlier, it was used to drive around five of the people who matter most to me in this world, looking at Christmas lights.

And now … it had become quite a light show of its own. It almost caused two accidents as people driving home from work slowed down to get a look.

I was traveling past Arkansas Children’s Hospital when the first hint of electrical smoke smell hit my nostrils. Then, the ABS and brake lights came on, soon followed by the windshield wipers. Then, I not only smelled smoke but saw smoke. It was coming out of the speaker on the dash. I tried to roll down the windows, but nothing happened. I cracked the door so the smoke could escape and exited at Woodrow Street. I parked on a vacant lot at 7th and Woodrow and had about 60 seconds to get all of my possessions out before the first flames emerged down by the gas pedal and brake. After that, all anyone could do was stand back and watch; a sudden and unexpected end that in hindsight was years in the making.

Our minivan had 107,000 miles when we bought it in 2012. Its first owner was Karen Smallidge, mother of one of my college roommates. We weren’t really looking for a vehicle at the time, but it was five years old and in great shape. Smallidge had taken very good care of it. And she was asking a reasonable price. It was in pristine condition. 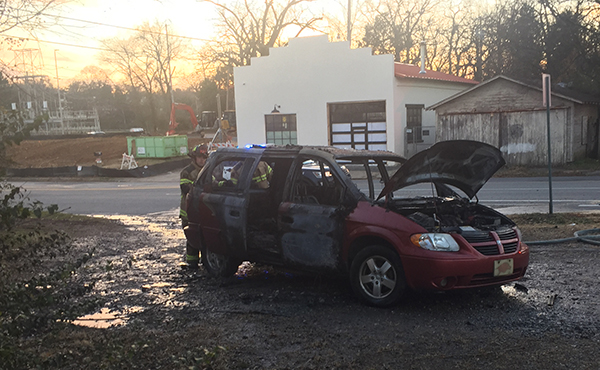 By 2020 though, the Grand Caravan was really starting to show her age. Rust patches were creeping up the tailgate and the sliding driver’s side door. Both sliding doors no longer operated electronically; you had to open and close them manually. (Oh, the humanity!) The sun visor, also on the driver’s side, was gone and most of the interior lights no longer worked (including the all-important make-up mirror light on the passenger side). One of the stow-and-go seats was now permanently stowed, no longer able to lock in place and accommodate a passenger.

I just used the term “no longer” three times. And our faithful vehicle as well is … no longer.

The decline mirrors the Second Law of Thermodynamics, which basically states that the natural tendency of all closed systems is to deteriorate towards disorganization. In even simpler terms: most everything goes downhill. The food you left out on the counter doesn’t get fresher over time. The new building doesn’t get stronger or shinier.

The 12-story building at the corner of Capitol and Main in downtown Little Rock was, when it opened in 1910, the tallest building in all of Arkansas. The September 4 headline in the Arkansas Gazette declared, “Big Skyscraper Opens Tomorrow.” The article went on to say that the construction of the building was due to the “… efforts of a few men who are striving to make the city of Little Rock the center of commerce and industry which it ought to be.”

Those few men, leaders of State National Bank, saw their bank go bankrupt the next year. In 1916, the building was bought by real estate tycoon and cotton trader, Jimmy Boyle. In 1925, a taller building was erected (the LaFayette Hotel), and, in 1926, the Donaghey Building reached an even higher peak.

Today the Boyle Building sits gutted and vacant, boarded up at street level, and for years the subject of renovation speculation. But plans have not materialized. Without intervention, the process of deterioration towards a possible extinction will continue.

More than a century later, it is the new Bank OZK headquarters that is now the object of modern-day awe and admiration. Far from downtown in far west Little Rock, this impressive, five-story, 248,000 square foot structure rises from The Ranch on 44 acres along Highway 10.

What will it look like 110 years from now? Time will tell.

And 110 years from now, I will look a lot like our minivan: ashes.

For I also seem to be in a continual state of decay. I’m not sure when I reached my physical peak.  Our honeymoon maybe? I was part of a Little Rock marathon relay team at age 30; maybe that was my peak. But now 51, I’m well past 100,000 miles on the odometer. Thankfully, my wife isn’t looking to trade me in for a newer model.

There are many who believe that all the complexity we observe in this world — from the optics of the eye to the feathers that allow birds to fly — originated with simple cells. These primitive nucleic acids, amino acids and other building blocks of life, with the help of energy from the sun, progressed and advanced over millions of years into humans, animals, insects, plants and all other forms of life.

By my observation, things seem to retreat much more readily than they advance.

Creationism, or intelligent design, cannot be proven by scientific methods and requires a faith that many don’t or refuse to possess. But it seems a more reasonable explanation as to how and why such an incredible variety of life exists on this planet.

At least for now.

For two decades, Jason Pederson served as KATV-Channel 7’s “Seven-On-Your-Side” reporter. Now on the other “side” of his award-winning time on the news, he leads the Office of the Ombudsman for the Arkansas Department of Human Services. His perspective-filled and thought-provoking column, “This Side of Seven,” publishes exclusively in AY About You magazine monthly.