This Side of Seven: Evel Obsession 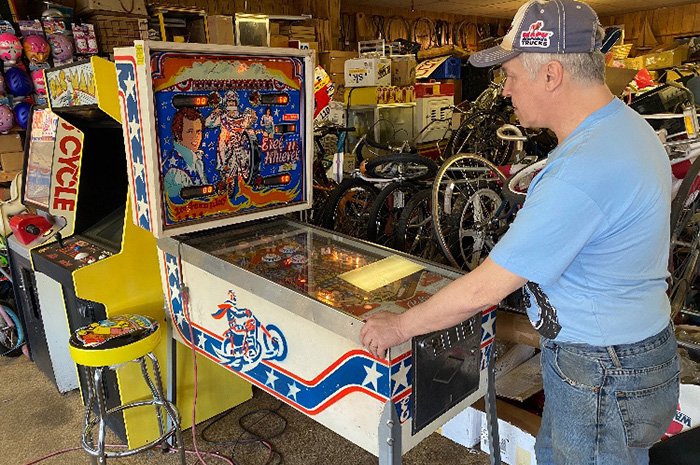 In Dec. 31, 1967, at the age of 29, Evel Knievel’s body was broken and battered when his motorcycle jump over the fountains at Caesars Palace ended in a crash landing.

Knievel credited his helmet with saving his life.

On Sept. 23, 2020, at the age of 59, Lawrence Sorenson’s body was in even worse shape. His colon ruptured, and cancer was discovered in both his colon and liver.

Well, Dr. Marotti and a whole lot of prayer.

“I had people praying for me all over the country,” recalls Sorenson as he sits in his southwest Little Rock bicycle repair shop. You know that cluttered desk, office, or garage that looks like a tornado hit it, but you know exactly where everything is? That is Sorenson’s shop — 6,500 square feet of organized chaos.

It was not Knievel’s faith that made him Sorenson’s idol. In fact, Knievel didn’t profess a belief in Christ until the last year of his life. He was baptized by Pastor Robert Schuler on April 1, 2007, and died eight months later. Actor Matthew McConaughey delivered the eulogy at Knievel’s funeral: “He lived full throttle. We’re celebrating an American hero who talked the talk and walked the walk. Who rode the bike and made it fly.”

Both Sorenson and Knievel grew up poor. Both put a high value on the importance of keeping your word. And both made a living in the entertainment industry; Knievel serving up death-defying jumps and stunts aboard his motorcycle, and Sorenson serving up cotton candy and snow cones aboard his food trailers. 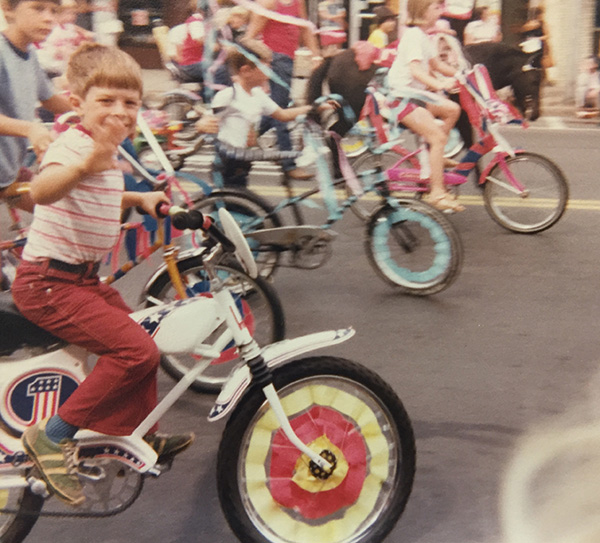 “My parents were in the carnival industry,” Sorenson recalls. “We left the East Coast for a warmer climate and landed in Little Rock in 1969 when I was 9. Our family has had a presence at the Arkansas State Fair for 50 years.”

Sorenson also has booths at Dickey-Stephens Park and War Memorial Stadium. And his two sons have joined the family business, operating trucks that sell funnel cakes, lemonade, corn dogs and soft-serve ice cream. “They both had to get real jobs last year because of COVID,” chuckles their mom and Sorenson’s wife, Linda.

Sorenson was a young teen when Knievel was jumping stacks of cars and lines of buses aboard his Harley Davidson XR-750. A special bike was used for Knievel’s 1974 attempt to jump Snake River Canyon. At one point, seven of the highest-rated ABC’s Wide World of Sports broadcasts were Knievel jumps.

Sorenson had a much smaller audience when he was popping wheelies or standing on the seat of his Honda Hawk 400 motorcycle going 40 miles per hour down the streets of Little Rock. But he did it for the same reason Knievel did it — to sweat in his boots a little.

But what really caused Sorenson to sweat in his boots as a young man were women. One woman in particular.

“I worked at Barton Coliseum with my mother as a ticket taker, and year after year, I would see and visit with Lawrence, who was working with his parents,” Linda recalls. “I would get 15-minute breaks and beeline over to his food truck. I knew we liked each other, but he just wouldn’t ask me out.”

After eight years of this, Linda’s mother grew tired of her complaining and told her to ask Sorenson out. So, she did — to an upcoming concert at Barton featuring Ricky Van Shelton and Alabama.  Three months later, Sorenson used the money he had been saving for a new motorcycle to put a ring on her finger. The couple recently celebrated 31 years of marriage.

“Linda has always been in charge,” Sorenson quips, only half-joking. And it is Linda who gets the credit (or the blame) for getting Lawrence hooked on Evel Knievel memorabilia.

Sorenson was at a carnival convention in Las Vegas when he saw an Evel Knievel photo collage for sale. He wanted it, but came home empty-handed. He shared his regret with Linda, who tracked it down and bought it for him.

It was the start of his “Evel” obsession.

“I’m not the only sick one,” Sorenson points out. And he’s right. There is an “Everything Evel” Facebook group that has nearly 12,000 members. Many of those members prayed for Sorenson during his hospitalization and continue to lift him up during the chemotherapy that he endures twice a month.

There is also an Evel Knievel Museum in Topeka, Kansas. It’s home to motorcycles Knievel rode, along with helmets, leather jumpsuits and capes that he wore. Several of the pieces in the museum can also be found in Sorenson’s collection: a pinball machine, bicycles and tricycles, toys and posters. He has the bicycle my brother rode in the mid-’70s. I’m still jealous.

Sorenson has hundreds of Knievel collectibles. Some have great financial value. The value of other items is more sentimental. He currently has about 40 Evel Knievel bicycles. His goal is to acquire 100.

While Lawrence only buys, he fully expects his wife and sons to start selling after he is gone.

“I don’t have a 401(k) or retirement fund,” Sorenson admits. “The collection and shop will be left to Linda and the boys (Lawrence Jr. and Chris). They don’t share my passion for Evel. I hope each will pick out one or two choice pieces as a memento to remember me by and find new homes for everything else.”

Not that Sorenson is planning on checking out anytime soon. When it comes to his cancer battle, he may not be as fearless as his idol, but he is optimistic.

“I just know I’m going to beat it,” Sorenson says.

Even during his chemo weeks, Sorenson finds his way to the shop. It’s his landing zone — the place he feels most at peace. He loves it when unfamiliar faces reveal that they are customers from long ago. Many people who got their first bike from Sorenson return to buy bikes for their kids. The business will celebrate 50 years in 2023.

“I used to sell the really expensive bikes, but years ago I made a business decision to focus on selling and servicing bicycles that cost $350 and below,” Sorenson says. “I leave the high-end bikes to the other shops. Somebody has got to work on all the bikes sold at Walmart, and we don’t mind working hard for our money down here.”

After Knievel survived his failed landing at Caesars Palace, he became an advocate for motorcycle helmet usage. Cancer has stirred some advocacy in Sorenson too.

“Watch your health,” he says. “I had been living with abdominal discomfort for several months.  It was divine intervention that I went to the ER on the day my colon burst. God spit the words, ‘Take me to the ER’ out of my mouth. My inclination has always been to tough it out. Had I stayed at home, I would have died in my bed within 12 hours.  Listen to your body, and take care of yourself.”

In the end, Sorenson knows that none of us — not even a man who seemed as indestructible as Evel Knievel — escapes death. Lung disease took Knievel at 69. But until the sands in his hourglass run out, Sorenson plans to live a life of integrity, loyalty, imperfection and faith. Much like Knievel.

For two decades, Jason Pederson served as KATV-Channel 7’s “Seven On Your Side” reporter. Now on the other “side” of his award-winning time on the news, he now serves as Deputy Chief of Community Engagement for the Arkansas Department of Human Services. His perspective-filled and thought-provoking column, “This Side of Seven,” publishes exclusively in AY About You magazine monthly.

READ MORE: This Side of Seven: Trickle-Up Economics