This Side of Seven: Hitting the Right Notes

This Side of Seven: Hitting the Right Notes

It was the spring of 1986, and there was an intense battle taking place inside New Richmond High School’s Little Theater. Director Mary Finley was agonizing over the casting of several key roles in her planned production of Fiddler on the Roof, including the male lead, Tevye.

Tevye the Dairyman is a hardworking, loving father trying to hold on to his Jewish roots and traditions in the face of a changing culture and three headstrong daughters. Set in 1905, the Broadway musical has themes that still resonate today, and casting a strong Tevye is key to connecting with audiences.

Finley knew that, so she kept the two young men (both sophomores) trying out for Tevye on stage until well after midnight. Back and forth, she directed the battle from her seat on the first row, each Tevye-hopeful spitting out lines and singing songs opposite other casting considerations. Finley’s decisions would be posted on the principal’s office window the next morning.

I hardly slept that night. Would I get the lead, or would my neighbor across the street, Nick Weiss, get that plum role? Nick was really good, so I was prepared for the possibility that he might win out. And the next morning, Nick’s name was listed next to the role of Tevye. What I hadn’t considered was while Nick and I were battling for the lead, other students were auditioning for all the other main parts. My finger traced down past the other male roles — Motel, Perchik, Fyedka, Lazar, Rabbi. Holy cow, was I even cast at all? Then, there was my name, across from … Mordcha, the bartender.

The blow to my ego was immediate. My pride was wounded. I worked hard to stifle the swelling emotions inside me. After school, at the first rehearsal, I learned that Mordcha has no singing solos and no speaking lines. The bartender is onstage for a few scenes, including the lively bottle dance, and he sings as part of the chorus.

The only fiber in my being that didn’t want to quit was that fiber woven by my father, an edict he voiced over and over throughout my childhood: “Pedersons don’t quit.” So, I didn’t.

Shortly after the final show, I received a letter from Mrs. Finley.

“I will always treasure the maturity and class I saw in you when you weren’t cast at Tevye. You were so wonderful! I’m so impressed that you could admit disappointment, accept the decision, and rally enough to dedicate early on to Fiddler. You are a very talented young man.”

I can share with you exactly what Finley wrote because I still have her letter. It is a prized possession. There is great power in a well-timed word of encouragement or praise, and the power is amplified when it can be read repeatedly.

Allison Bond has figured that out.

The day I visit with Bond via Zoom, she is a bit preoccupied.

The 24-year-old lives just southwest of Fayetteville, and a truly gruesome discovery had just been made in her little town of Lincoln. Police investigating a missing person report found the dead body of 73-year-old Gloria Pike on top of a bed in a living room, wrapped in newspaper and blankets. Police believe Pike had been dead for eight or nine months. Her death was not reported by her 54-year-old daughter, Geanee, who was now in jail and charged with abuse of a corpse and financial identity fraud. After her mother’s death (believed to be by natural causes), the social security and disability checks kept coming, and police say Pike kept cashing them.

“I just found out about it,” Bond tells me. “And then I found out that, oh, I know who she is related to. So, I sent the sister-in-law of that person a sympathy card earlier today.”

You see, that is Bond’s thing, her purpose. Expressing sympathy, concern, love and kindness through cards, notes and letters. Lots and lots of them.

“I love sending cards to kids who are sick,” she says. “Or people who are sick, or old, or … senior citizens, or soldiers. … I just like trying to spread kindness to as many people as I can. I like sending cards more than anything, like birthday cards and greeting cards. I’ve gotten cards donated from DaySpring in Siloam [Springs]. I’ve had donations of cards made to me by people through Amazon.”

Bond has a Facebook page, Kindness Through Letters, where she updates followers on her letter-writing exploits. She started her page in July with this message:

“Hello, I am Allison and I love spreading kindness to others all around the world. I am disabled, 24, and from Arkansas. I love sending love to others even if I don’t know them. It’s a huge blessing being able to show God’s love, as well as my love, to all these people I send stuff to. I have pen pals from different places all over the world and I handwrite each letter and I spread kindness to each of them.”

Most pregnancies last 37 to 42 weeks. In 1996, Cathy and David Bond welcomed Allison into this world way ahead of schedule — at 25 weeks. She weighed barely over a pound. The premature delivery resulted in some permanent disabilities. Bond suffers from mild multiple sclerosis, and she is developmentally delayed.

“Everybody at LifeStyles (the human services agency where Allison spends her days) client-wise, which we are all basically students, is developmentally behind. Developmentally disabled. Except for the teachers. It’s a nonprofit. I love it. That’s where I met all of my friends, including two ex-boyfriends.”

She says she belongs to several pen pal Facebook groups. She credits social media with helping her develop contacts all over the country. Her goal is to write 1,000 letters this year and to gain a pen pal in every country; she believes she already has a pen pal in every state. She knows she has Alaska and Hawaii checked off, at least. “I haven’t really sat down to figure out what states might be missing yet,” she says.

Her mission to connect was born out of the pandemic, saying, “During this whole pandemic thing, some people aren’t allowed to see their families.” And she couldn’t see her friends when LifeStyles closed for a while. But her focus remained on others — those in nursing homes who could no longer have visitors, those in prison who may not have been getting visitors anyway, and especially those separated by their families due to military service. 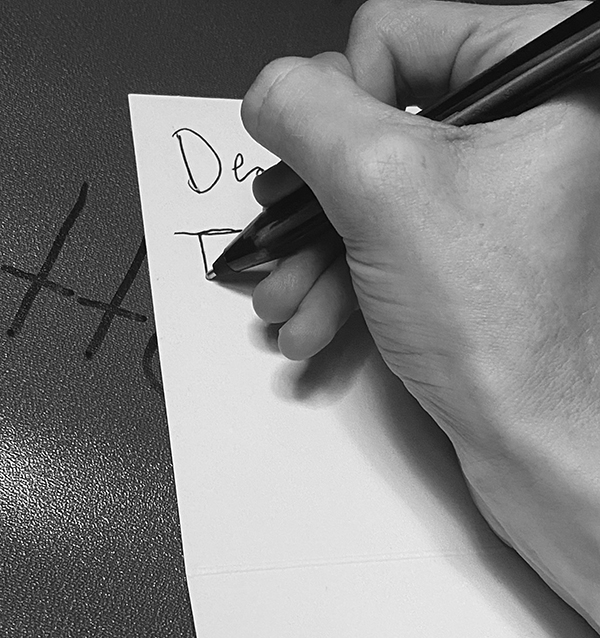 At the time of our interview, Bond counted 80 military members and six inmates among the growing list of people she is encouraging with her written communications, including one rather infamous inmate.

“I’ve even connected with people that I don’t know who are in jail,” she says. “I have a folder with prison letters, including Tiger King. When he was in jail, I wrote to him. He wrote me back, like, yesterday. He told me that he had won the appeal. I don’t even know what that means. And then he told me I was beautiful and that he loved me. And I was like, ‘Interesting.’”

That brings us to one of the things on Bond’s immediate to-do list: Get a post office box.

Another thing: get a passport. She wants to travel abroad, starting with Canada.

But until she can travel to distant lands herself, sending kindness through letters across the miles, mountains and seas will have to do. She will mail a card to a friend whose failing kidneys put her in hospice care, or to someone who just lost a parent, sibling or child. One man cried after hearing from Bond following his mother’s death.

“I sent him a sympathy card, and I knew him, but he was so happy about it,” she says. “He started tearing up. It was a great moment, and it has inspired me to do more.”

But her real inspiration, she says, comes from above.

“Probably because I’m a good Christian girl,” she says. “And when my grandma was alive, she told me to always be a good girl. So that is kind of what I stuck with.”

Her grandmother would be proud.

You can visit the Kindness Through Letters Facebook page if you would like to encourage Bond or support her mission of sharing kindness with the world via the written word.

READ MORE: This Side of Seven: Ode to Billie Jo