This Side of Seven: Silo Parenting 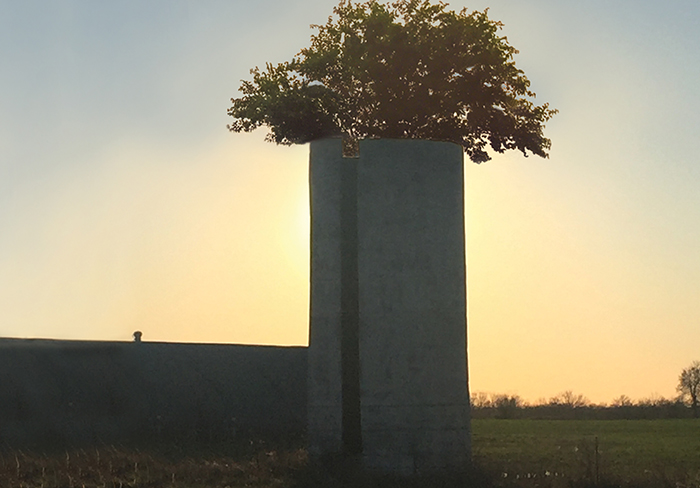 Trust the roots that can’t be seen. You worked many years — the silo years — to make those roots as strong as possible.

If you travel Highway 71 in southern Missouri, you may have seen a silo with a tree bursting forth from the top. If you are driving north, it’s on the left — somewhere a little past Nevada and a bit shy of Butler. I pass this silo each time I travel to and from my home state of Wisconsin.

I always look for it. It’s one of those travel markers: “I’m making good time; there’s that tree in the silo.” But during my most recent drive-by, it was more than a marker. It was a reassurance.

Usually, the sun is high in the sky when I drive by. This time the sun was setting. It was windy and chilly, but I stopped along the side of the road and snapped a couple of photos with my smartphone.  And with at least five hours of driving still in my future, I turned off the radio and let my thoughts wander.

On my mind was one of our adult children. A mistake had been made. Some trust was going to need to be rebuilt. This situation didn’t involve Mom and Dad; this situation involved others. We raised our kids to know right from wrong. But, of course, that guarantees nothing when newfound freedoms, friends and the quest for fun beckons.

Anyway, I got some disappointing news while driving back to Little Rock, and my thoughts returned to the tree in the silo.

It reminds me of parenting.

You have no doubt heard of helicopter parenting. It is the desire of a parent to figuratively, like a helicopter, “hover overhead” and try to oversee every aspect of a child’s life. It is a level of involvement and oversight that seems over-the-top to everyone, but the parent engaged in the practice.

Helicopter parenting is not a new metaphor. The concept was first coined in a book in 1969 when a teen offered this complaint: “Mother hovers over me like a helicopter.” The term gained more widespread use when Baby Boomer parents started helping and advocating for their children at levels not before seen.

A child may accept (or not even recognize) helicopter parenting in elementary school. But if such close observation continues into junior high and high school, it will likely strain the relationship or create a dependent young person not prepared to live life above the top of the silo.

During childhood, you can direct and guide your children fairly effectively. They often respond to your instructions, they value your input and you are, in their opinion, wise. They are quite content living within the walls and safety you provide.

But as they become teenagers, your influence begins to wane. They get older, they get taller, and they start to branch out. A desire to see more of the world grows and that world begins to see them not just as your son or daughter but as an individual.

During the later teen years the silo is still there — its walls still strong — but you are no longer able to shield your now young adult from the influences of the world. Branches that before felt only a slight breeze can now be bent, battered and even broken by strong winds.

The hardest part for a parent is often the realization that your job is done. You can always love and support and offer guidance (when asked). But the life you created must live life on his or her own.

Like most analogies, this one is flawed. When your children become adults they don’t just peer over the top of the silo. In most cases, they leave the silo altogether. And just like most of the silos that dot America’s rural landscape, an emptiness remains.

But during the time that the analogy applies, take your focus off the branches that the world can see. Trust the roots that can’t be seen. You worked many years — the silo years — to make those roots as strong as possible. They are still there. They can outlast rebellion, heated exchanges and bad decisions.

Silos serve a purpose. They are strong and not easily influenced. They store fermented pasture grasses or silage that will be used to feed animals. The silo protects against moisture and insects. But silos are not designed to store feed forever.

Silo parents serve a purpose. They are strong and not easily influenced. They provide a safe home for young people who will one day be used by the world. They protect against harm and the influences of evil. But silo parents are not meant to guide their children forever.

Trust the roots as they branch out. And trust that the Lord loves them even more than you do.

RED MORE: This Side of Seven: American Idols