This Side of Seven: The Final Say

This Side of Seven: The Final Say

If, during the course of this pandemic, you have given thought to a world without you in it, you are not alone. Death has been all around us these past 18 months.

There are the daily and running COVID-19 death tallies. There are the masks, reminding us constantly that a contagious, potentially deadly disease is in the ether. And there are all the obituaries of lives lost from COVID-19.

In terms of death totals, heart disease and cancer kill more Arkansans. But because these ailments aren’t contagious and do not strike in waves or surges, neither is deemed an imminent threat worthy of topping the nightly news. But a loved one dead by heart disease, or cancer, or a car accident, or suicide, or a drug overdose, is just as missed as a loved one claimed by COVID-19. And just as worthy of a proper send-off. 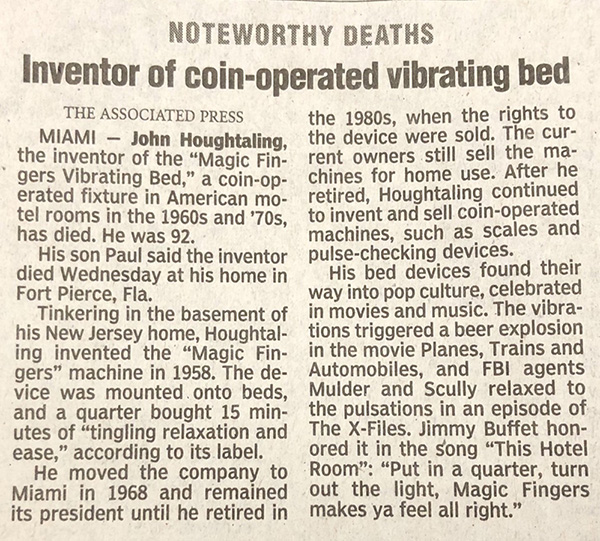 “John Houghtaling, the inventor of the ‘Magic Fingers Vibrating Bed,’ a coin-operated fixture in American motel rooms in the 1960s and ’70s, has died. He was 92.”

Thus begins one of the many obituaries I have clipped and saved over the years. Feature obituaries, like the one from 2009 relaying the passing of Houghtaling, are usually reserved for individuals of some prominence, quirk or infamy. My real interest gravitates to obituaries of everyday Arkansans, and what I might learn from their recently completed journeys.

Up until May 1993, there was no charge for an obituary published in the Arkansas Democrat-Gazette. As of a couple of years ago, the first 50 words of an obituary remained free (the price for an obituary in the Dallas Morning News starts at $170). After that, the cost was 99 cents per word.  The average obituary is 100-150 words. A 600-word obituary, with a photo (an extra $30), that runs in the statewide edition of the newspaper costs close to $1,000.

Frank Broyles’ obituary cost more than $2,000. People dying have literally helped keep newspapers alive. And that income comes with little effort, as families and funeral homes provide almost all the content on the obituary pages. Obituaries do not have to run within three days of a person’s death, but usually, they do.

Most obituaries are boring and uninspired. That is not a reflection of the life lived. It reflects the reality that little or no thought is put into the challenging task of summarizing a life in a few column inches. The limited time available following a death, coupled with the grief, does not allow for much reflection or creativity. And that is a shame. Because when everyday Arkansans are given the send-offs they deserve, we can all learn from the lives lost. 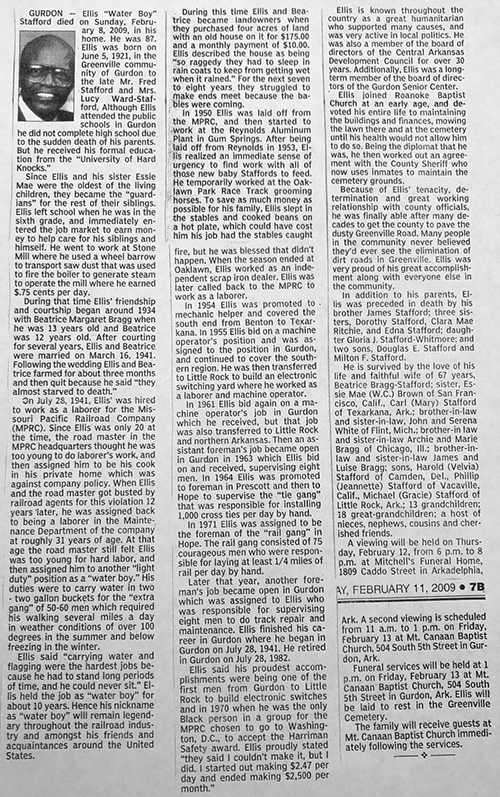 At their best, obituaries are about the dead but for the living.

In 2003, former Arkansas Democrat-Gazette reporter Casey Munck wrote what remains my all-time favorite Arkansas obit. It begins, “For as long as anyone can remember, Sylvia ‘Gummy’ Diane Hicks Collins ate gummy bears. Inside her Benton home she kept an industrial-size bucket of the candy within reach at all times. She loved the candy so much her family nicknamed her ‘Gummy.’” Collins died of a heart attack at age 67.

“Usually wearing loud prints, mumus and costume jewelry, Collins proudly showed off an eclectic style on her 5-foot-2 frame.”  Then, a quote from Gummy’s daughter: “She wore whatever she wanted to wear. If it matched, fine. If not, then we had to get over it.” Collins loved romance.  She wanted it in novels, preferably by Danielle Steel, in movies and in her life. “She liked men,” her daughter said.

Munck concludes, “Collins lived life without worrying what people would think. And that is what she will be remembered for most, her family said.”

I got to know Gummy in death and wished I had known her in life. That is the mark of a good obituary.

Gummy teaches us to care less about what other people think.

The obit of Ellis “Water Boy” Stafford of Gurdon is nearly 30 column inches. Born a Black man in the South in 1921, Stafford lived to be 87. His was a hard but ultimately successful life. Stafford spent his 30s working for the railroad, carrying 2-gallon buckets of water to the crews laying the tracks. “Ellis held the job as water boy for about 10 years. Hence his nickname as ‘Water Boy’ will remain legendary throughout the railroad industry and amongst his friends and acquaintances around the United States.”

Imagine being called “Water Boy” as a grown man. And imagine working as a water boy for 10 years. For Stafford, it was a job and a title worthy of mention in his goodbye to the world. It represented overcoming, rising above, and a dignity that can be found in any work. Stafford started out making $2.47 per day and ended up making $2,500 per month.

Mr. Stafford teaches us to persevere.

I learned in the obituary of Freeda Cummings (80) that, “Freeda disliked very much any Texas or Alabama football team and considered any game those states won as rigged or otherwise not on the up and up. In lieu of flowers, the family asks that you instead go fishing. Watch a Razorback game. Eat a well-made pecan pie. And love.” 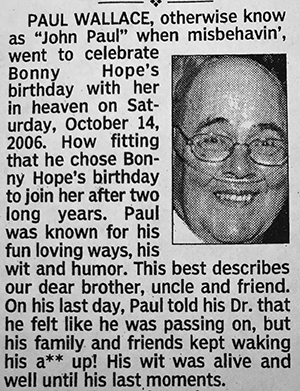 Cummings teaches us that there are times to love and teams to hate.

Eloise “Weesie” Goss, born in 1931 and dying at age 89, was the cook for the Country Club of Little Rock for 48 years. “Eloise reached out to the disenfranchised, the ignored, and even the racists in the neighborhood when she first moved to the Central High neighborhood — yes, she fed them, too. At the end of their lives, they asked for forgiveness and asked why she took care of them when they were so hateful. She said she was following God’s law to love your neighbor as yourself.”

Ms. Goss teaches us the freeing power of forgiveness. 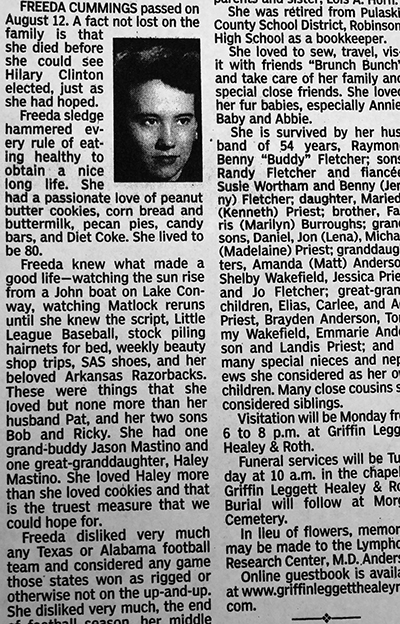 The obituary for Paul Wallace (72) of Little Rock reveals that, “On his last day, Paul told his doctor that he felt like he was passing on, but his family and friends kept waking his a** up! His wit was alive and well until his last moments.”

Born in Fordyce and buried in Lewisville, the recap of William Patrick Bryant’s life includes a harrowing tale from World War II, in which he was mistaken by the French for a German spy. “With a gun pointed to his temple, Bryant insisted he was from Arkansas. That is when an American woman intervened. She had married a Frenchman and knew about Arkansas. She asked Bryant the name of the baseball team in Little Rock and Bryant answered, the ‘Travelers.’ That convinced her and the Underground that he was indeed American and his life was spared.” He lived to be 85.

Sr. Master Sgt. Bryant teaches us that where you are from can matter. It can matter a lot.

From the obituary of Susan Francis Clark, who, starting at age 12 lived the entirety of her life at the Arkansas Children’s Colony (later renamed the Arkansas Human Development Center) in Conway before passing at age 67: “Susan was — despite underestimation of her true abilities — an extraordinary human being, a true innocent, an Earth angel. Susie has returned now to Heaven, where she will be as she could have been but for one small chromosomal breakdown.”

Susan teaches us that all lives have value.

Meredith Rose Weinstein Baskin (34), Thomas Joseph “JT” Vanpelt (27) and Brittany “Bee” Ann Harrison (34) are just a few of the brutally honest obits scripted by families left to grieve the losses of loved ones to addiction.

The obituaries of these young people teach us that tomorrow is promised to no one.

And then there is the obituary of Greenbrier’s Jason Coleman, written by his 17-year-old daughter, Annsley, after Coleman took his own life at age 44. “To some people, depression may seem like a simple case of sadness or an excuse to avoid a difficult task. I want people to realize that depression is so much more, and no one will understand just how strong someone like my daddy was. If you, or anyone you know, is suffering from depression, please take action, and take it seriously, before it is too late, before it seems as though there is no other option. My daddy didn’t want to die; he was just tired of living.”

A daughter’s tender summary of her father’s tortured life teaches us understanding. And empathy.

After your death, will anything be learned from the brief summary of your life? Or will it be, as renowned Philadelphia obituarist Jim Nicholson calls it, a “desperate chronology” of jobs, achievements and survivors?

You lived the story. Have the final say. Teach ’em, touch ’em, or leave ’em laughing.

READ ALSO: This Side of Seven: Ode to Billie Jo