This Side of Seven: There’s No Place Like Home 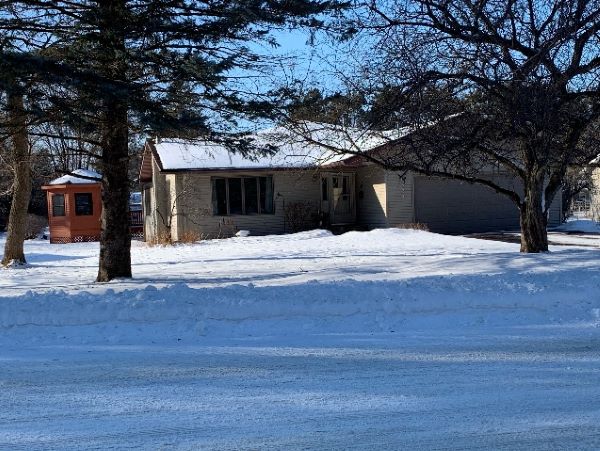 This Side of Seven: There’s No Place Like Home

My dad, Joel, had a side hustle long before there was such a term.

As a teacher at the local tech college, he had his summers off. So he and another teacher, Dan Richter, decided to build homes. Starting in 1975, P&R Construction built spec homes, meaning that they had no buyer when they started and hoped to attract a buyer before they finished. Dad and Richter only built one home each year, and they ended up making about $5,000 each for their efforts (or about $23,000 each in today’s dollars).

They built four homes, the last one in 1978. It is still occupied by the family who bought it.

“There wasn’t much to buy or rent at the time,” recalls Jim Shumaker. He had just moved from Iowa to take a job in my hometown of New Richmond, Wisconsin. “We found a small place on 6th Street to rent, and we drove around looking for a place to buy. We saw your dad working on the house. It was almost finished.”

Jim and his wife, Cheri, made an offer. The builders accepted, and 235 Grand Avenue became home to the Shumakers and their boys, Steve, Dave and Mike.

I asked Jim to pick his favorite out of 43 years of memories. “Oh, probably having the boys here.” Rambunctious, smart, athletic boys with lots of friends and girlfriends constantly coming and going. Until one went off to college in Madison, and the others went off to college in Eau Claire. And once they were gone, they stayed gone, making good lives for themselves and their families in nearby cities.

An expansion project at the Shumaker home added a comfortable TV room along with a deck/gazebo to the west. Jim finished out his career at 3M, while Cheri did the same as a nurse at Holy Family Hospital. And now, it’s back to the way it was before the boys. Just Jim and Cheri. Two people well-loved, two lives well-lived, in a home full of shared memories.

Except only one can really remember.

“My mom’s memory has been failing, and it’s getting worse,” Cheri’s son Mike says. “She no longer remembers who I am.”

Disclaimer: Mike is my best friend. He happily shares how I traumatized him with a cruel remark on his first day of 2nd grade at a new school (“Who’s the new fat kid?”). But somehow, despite that auspicious beginning, here we are, in our early 50s, still on this journey together. Mike has been telling me about his mom’s decline for years. Over Christmas break, I stopped by at 235 Grand Avenue for a visit while Mike was there.

“What is your name?” That was the greeting a stern-faced Cheri gave me when she answered the door. Once Jim indicated things were OK, I was welcomed inside, and Cheri was conversational and delightful.

But she re-asked the same question a couple of times, offering me a glimpse into what Mike had been telling me. As we chatted, Mike started to get emotional. I don’t think his parents noticed, but I did.  Later, I asked him about it.

“It was just great to have you there,” he says. “It meant a lot to me that you stopped by.”

Home is an intimate place. Home can bring out emotions. Dorothy had it right — there is no place like it.

At the same time back in 1978 when Dad was building Mike’s home, he was also building ours about a mile away. And like Mike, I can still visit home. I can go to my old room, sleep in my old bed, recall old memories and make new ones. It is great, but it can’t last. The day will come when new families will start making new memories in the places only our families have ever called home.

When my wife Mary Carol turned 50, she wanted to spend a weekend in her hometown of El Dorado. She wanted to drive by where her grandmother lived. She wanted to cruise up and down Northwest Avenue and park on the “cool” side at Sonic (did you know Sonics have a cool side?).  And she wanted me to drop her off at Hugh Goodwin Elementary around 2:30 p.m. so she could walk the several blocks down North Jefferson Avenue to the home where she grew up, just like she did as a girl.

So I did. I parked nearby, where she would join me 30 minutes later. And then I sent this message: “Just dropped her off at Hugh Goodwin. I’m parked on Washington, back behind your house.”

You see, I had contacted the current owners of Mary Carol’s old home via Facebook and shared with them what I believed to be her desire to step foot again into the home of her youth. They loved the idea, and a plan was made.

Andrea and John Benson watched Mary Carol through the blinds as she stood across the street, wistfully looking at the place she called home more than three decades ago. After she joined me a block away, I unexpectedly pulled into the driveway and said, “Let’s just ring the doorbell and ask to take a look around.”

“Are you crazy?” she exclaimed. But she followed me as I hopped out, and as we approached the front door, it opened and Andrea said, “Welcome!” Mary Carol slowly realized what was happening. She was being given an opportunity to step back into time. The second she crossed the threshold and walked through the doorway, she burst into uncontrollable tears.

Why? Dorothy knows why.

Not only did the Bensons allow Mary Carol to look all through the home at her own pace, they had prepared a meat and cheese tray and popped open a bottle (or two) of wine to share with us. Many changes had been made, and another remodel was in progress. But much of the structure remained just as Mary Carol remembered, transporting her back to the ’70s and ’80s in a way no other location on earth could. We were there for two, maybe three hours. Our generous hosts and the wonderful conversation made the time fly by. 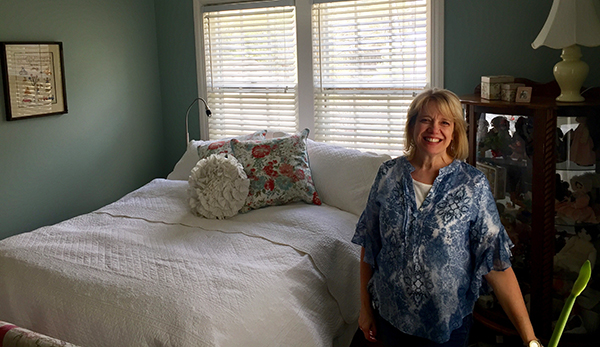 Mary Carol in her childhood bedroom in El Dorado.

Both my wife and my best friend shed happy tears, remembering happy times. But not everyone has strong or happy connections to home. Some homes are abusive or dysfunctional. Children born into military families often have many homes. So do children in foster care. Homes are lost in fires, natural disasters, bankruptcies, divorces and bad economies. Some are lost to neglect and time. And many people are homeless.

2 Corinthians chapter 5 teaches us that, “For we know that if the earthly tent we live in is destroyed, we have a building from God, an eternal house in heaven, not built by human hands.”

Mike and his brothers are encouraging their parents to hand over the keys for 235 Grand Avenue to another family — that a move to assisted living is a good idea. Jim is not ready. “I think we’ll stay here for a while longer.”

C. S. Lewis wrote of his characters in his final book in the Narnia series, The Last Battle.

“All their life in this world and all their adventures in Narnia had only been the cover page and the title page: now at last they were beginning Chapter One of the Great Story which no one on earth has read: which goes on forever: in which every chapter is better than the one before.”

I guess Dorothy had it half right. There is no place like home. Home just isn’t in Kansas.

READ MORE: This Side of Seven: Arkansas’ First School Shooter