I sit before you with this week’s opening movies with an unwarranted feeling of vindication. Last week I put my reputation on the line with the hot take (or is it cold) that one of the weekend’s opening flicks would dethrone Ford v Ferrari and take the top slot at the box office. Frozen II accomplished that feat, opening to a No. 1, $127 million weekend. Anyone could have predicted as such, but I like to relish the victories (see more self embellishment later with the update on my Rotten Tomatoes predictions). 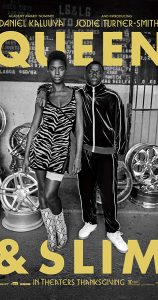 Slim (Daniel Kaluuya) and Queen (Jodie Turner-Smith) are on their first date together when the pair is pulled over by a police officer. What should have been a minor traffic infraction takes a turn for the worse, and Slim ends up killing the officer in self-defense. On the run, the duo becomes iconic, a symbol for national angst, pain and grief.

This one looks like a thinker and possibly a tear-jerker. Kaluuya is a commanding force on the big screen, and early reviews market this as Jodie Turner-Smith’s coming out party. 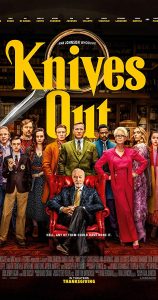 “A whodunnit like no one has ever dunnit.” From everything coming out of prerelease and early screening buzz, this seems to be accurate marketing. Rian Johnson (Looper, Star Wars: The Last Jedi) is back in the director’s chair with this fun twist on a murder mystery, and a tribute to Agatha Christie, which features one of the most top-to-bottom cast lists of the year. A crime novelist turns up dead at his estate after his 85th birthday, and Detective Denoit Blanc (Daniel Craig) shows up on the scene questioning everything, determined to get to the bottom of the death.

I can’t wait to see this one, which will surely be involved in many categories come award season.

On the money with this one. 21 Bridges had a prerelease score of 46 percent, but we figured it would come up a few notches after its opening weekend.

Frozen II dropped just a little from an opening 79 percent, which we forecasted almost perfectly.

A Beautiful Day in the Neighborhood

Another right on the money. Although, it was not too difficult to predict that this heartwarming biopic would only drop negligibly from 97 to 96 percent.