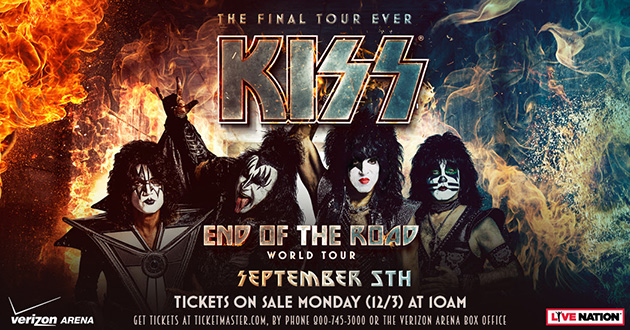 KISS is coming to Arkansas next fall! Rock and roll all night at Verizon Arena with the legendary band, as they play some of their greatest songs. Celebrate with them as they end their long-running career with their “End of the Road World Tour”.
The show starts at 7:30 on Thursday, September 5, 2019. Tickets are on sale now. The band is also offering a VIP KISS Meet and Greet Experience for the Kiss Army fans to meet their favorite rockstars.
The band announced their final tour on NBC’s “Americas Got Talent” after their live performance of “Detroit Rock City” on September 19, 2018. Their tour will start January 31, 2019 in Vancouver, British Columbia with the last show scheduled for December 3, 2019 in Auckland, New Zeland, though the band said the tour will be multiyeared.
KISS released this statement after the announcement:
“All that we have built and all that we have conquered over the past four decades could never have happened without the millions of people worldwide who’ve filled clubs, arenas and stadiums over those years. This will be the ultimate celebration for those who’ve seen us and a last chance for those who haven’t. KISS Army, we’re saying goodbye on our final tour with our biggest show yet and we’ll go out the same way we came in… Unapologetic and Unstoppable,” said KISS.
Tickets are available at www1.ticketmaster.com. Visit www.verizonarena.comfor more information.
Kiss has rocked around the world for the last several decades releasing hits like “Rock and Roll All Nite” and “Detroit Rock City”. The band has sold more than 100 million albums worldwide and were inducted into the Rock and Roll Hall of Fame in 2014. They have released 44 albums since the release of their 1974 self-titled album “Kiss”.
RELATED: The State of Music