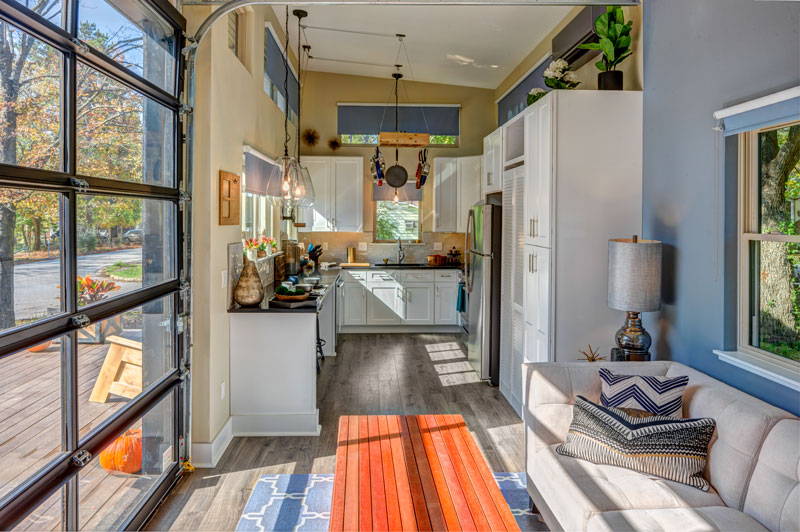 [dropcap]A[/dropcap] tiny home is quickly becoming a big attraction in south Fayetteville. An expansive deck surrounds the front of the L-shaped structure that’s comprised of brown Abaco wood and black, metal siding. The home actually consists of two buildings on a corner lot. A bright, teal door welcomes guests into the living quarters. A recording studio runs perpendicular to the tiny house. The structure’s facade is designed to look like an oversized guitar amplifier.

This small, but unique addition to an otherwise quiet neighborhood, belongs to Asha Mevlana, a woman who’s lived life largely. She’s performed in front of big crowds as a violinist in the Trans-Siberian Orchestra. She’s lived in large cities like Los Angeles, New York and Sydney. The Boston native has always had big dreams.

“I used to think ‘I want more, more, more,’” Mevlana says. “I was going to be in business and I was going to make a lot of money and I was going to have big houses all over the world. That was my mindset.”
All of that changed when Mevlana was diagnosed with breast cancer at the age of 24. It was then that she realized life is not about having things.

“It’s about experiences and family and being around people you love,” she says. “That became so clear to me. That was what was important.”

A few years ago Mevlana was inspired to purge her possessions after reading “The Life-Changing Magic of Tidying Up: The Japanese Art of Decluttering and Organizing” by Marie Kondo. Mevlana says it felt so freeing to get rid of her things. 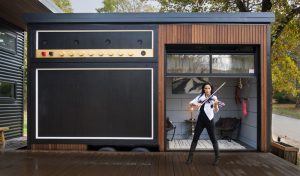 Mevlana, an electric violinist for the Trans Siberian Orchestra made sure any electric instrument could “plug” into her outdoor amp.

Her desire for downsizing is embodied in her new tiny home in Fayetteville. The touring musician has moved to Northwest Arkansas to be closer to her brother, his wife and their two sons. During previous visits to the region, Mevlana says she discovered a community feeling that she’s never found in any of the other place that she’s lived.

“I really love that welcoming feeling and the sense of community,” she says. “That was really important to me.”

In the summer of 2016, Mevlana applied to be on “Tiny House Nation,” a television show on the FYI network. The program follows renovation experts and hosts as they travel across the country highlighting people living in inventive, small spaces. The show also helps families design and construct their own home in a space no larger than 500 square feet.

Mevlana is friends with co-host Zack Giffin so she’d been watching the show for some time and was fascinated with the concept. When she was selected to appear on the program, Mevlana set to work designing her 400-square-foot home.

“I didn’t want it to be impractical,” she says. “I really wanted it to be a place I could actually live and grow into and be there for a long time. That was important to me, too.”

During the construction process, Mevlana enlisted the help of her brother-in-law, Stefan Vickery, who owns Vickery Construction in Little Rock, as well as her brother and new neighbor, Z Niederman. Niderman lives around the corner from his sister and is the owner of a development and construction company called 3VOLVE Community Ecosystem Development. Niederman says he was glad to have the opportunity to assist his sister with her tiny house project.

“We were really excited to have my sister move here, but also it’s a cool thing in the neighborhood that we get to work on,” he says. 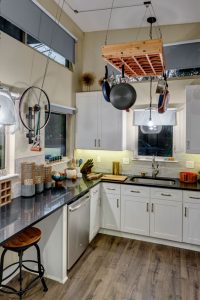 The tiny kitchen features full-sized appliances and a recycled old bicycle wheel is used to crank the pot rack up and down in the kitchen.

Mevlana grew accustomed to living in small spaces in New York. Apartments there usually only have one small window, so Mevlana says her number one priority was to make sure her tiny home had lots of windows.

“I love light. It makes me feel happy, it makes me feel open,” she says. “And I felt like in such a small space it’s so important to not feel closed in.”

From her living room, Mevlana can sit on her couch and gaze out at her neighborhood through a glass garage door that can roll open to remove the barrier between the indoors and the outdoors. When she wants a little less light, the home’s many windows can be covered with bluish gray shades that really pop against the cream colored walls.

High ceilings and an efficient use of storage space also help the house feel more spacious. The washer and dryer are stacked. Four barstools with wooden seats are stowed beneath the bar. White cabinets located above and below black, Silestone countertops in the galley kitchen provide ample storage.

A pot rack that hangs overhead can be raised or lowered using a pulley system. “Tiny House Nation” co-host Zack Giffin fashioned a crank for the pulley system from the spokes and gears of an old bike he found in a dumpster.

Another unique feature of the house is a custom-made, multipurpose coffee table constructed from some of the home’s leftover Abaco wood. The table folds open to become a video editing desk with two mounted screens and built-in drawers. While sitting on her couch, Mevlana can use the coffee table as a workspace while editing videos.

The home’s sole bedroom is located in a loft above the bathroom. Instead of a traditional staircase, the loft can be accessed by ascending a series of alternating tread stairs.

One of the most striking features of the home’s exterior is a large, wooden deck that expands out from the house toward the street.

“I love the outdoor porch because in a tiny house that just makes it so much bigger,” Mevlana says. “It makes it feel so much more spacious having this expansive deck.”

During the design process, she argued against a suggestion to build the porch in the backyard. Mevlana was adamant that the deck should face the street because she wanted it to feel welcoming and inclusive to passersby.

“Asha was really keen on having a big porch out here where she could perform and have friends over and just play,” her brother says. “So that was key to her.”

Mevlana has already hosted a jam session, but she wants to do more. Inspired by NPR’s “Tiny Desk Concert Series,” Mevlana intends to curate a Tiny Deck Concert Series where local musicians can come perform on her porch. Her brother says having that community space in the front yard is a great addition to the neighborhood.

The music can be projected through marine speakers installed inside the guitar amp facade of the 120-square-foot recording studio. The soundproofing insulation used inside the studio is made from recycled denim. Unlike the main house, which is built on a foundation, this structure was built atop a trailer. 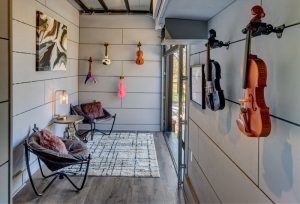 The “music room” is soundproofed with recycled denim. Marine speakers on top face the deck to help amplify sound.

“The idea behind that is that it could be transported,” Mevlana says. “I could take that on the road. I could go to music festivals.”

The interior of the music trailer, which could also double as a guest bedroom, has wood flooring and a large, glass garage door that mirrors the one installed in the living quarters. Cabinets provide storage inside the studio and Mevlana’s collection of violins can be mounted to the walls for storage as well as for display.

“I really wanted to be able to showcase their work and help what they’re doing,” Mevlana says. “I just love their mission.”

Several of the materials used for this project were purchased from local businesses. Mevlana says she appreciates every part of her house because she knows what went into creating it.

“It was really important for me to try to use as many local vendors as possible,” she says. “I felt like that was the whole reason I was moving to Arkansas, for this community, and I wanted to use that as much as I could.”

Mevlana says part of her motivation for building her house is so she can have a place to come home to and have more incentive to stay put.

“To have a place that’s actually mine, it makes me feel more settled,” she says.

Asha Mevlana will continue touring for performances, but Northwest Arkansas is now her home. By creating a welcoming space for her neighbors to come enjoy, Mevlana’s tiny home looks to play a big part in building upon that sense of community that brought her to Fayetteville in the first place.