Tips for Writing a Thank You Note 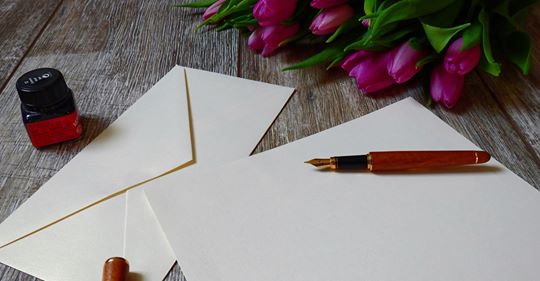 by Lisa Fischer
You only thought your mother would have this conversation with you, didn’t you? Nope. Leave it to Bossy Lisa Fischer to tell you how to run your personal life. I come to you in love. I really do. Writing a proper thank you note is something the recipient will appreciate and some will never forget. Let’s start with the basics.
You need foldover notes NOT WITH THE WORDS THANK YOU ON THEM. Order some from your favorite paper store. I use By Invitation Only in the Heights and friend Emily Stein’s Miss Em Prints (she has the ones with the state of Arkansas and your monogram in the middle. They are really cute). My favorites that I buy are about $50, but they are a box of 50 and I even give them as gifts. I have several boxes of foldovers. Some with my monogram; others with my name. It doesn’t matter. Just order something personal. Or you can get some with a cute motif. Just don’t buy them with THANK YOU on the front. Use a little more creativity, people.
Second, get a pen. It’s a gadget that people use when they write things. My 20-year-old just wrote a thank you note and told me that she hasn’t held a pen in six months. She wrote a thank you note for someone who had dropped off hydrangeas while she was recuperating from her tonsillectomy. She wrote the note as soon as she felt good which was about two weeks after getting the flowers. It didn’t matter it wasn’t prompt; she wrote a note. Period.
Which brings me to another point: We write them not only to thank people for their generosity, but they are also known as gift acknowledgements. It’s acknowledging the gift you ordered online or had shipped or dropped off at a wedding shower. I sent a gift to a bride in Fayetteville in 2016. Still haven’t gotten the thank you note. It was shipped locally, and I always wondered if she got it. I don’t want a note-I just want to know she got it. I even sent her a message on Facebook asking. She never replied. Oh well.
Here’s how you start:
Dear Person Who Likely Bought the Gift, (here’s a tip: if the gift came from the Smiths, you really just write it to the person responsible for gift purchases. Watch how this is done).
What a wonderful surprise it was getting a gift from you and Mr. Smith today. I love silk damask napkins! You chose my favorite item on my gift registry. Your friendship to our family means so much to us. I hope to see you at the wedding. (NOTE: Only use exclamation points sparingly. I have a thing about using more than one exclamation point.)
Sincerely,
Person Who Got the Gift
See what we did there? You didn’t write it to the Smiths. Mr. Smith didn’t even know you got the gift. You wrote it to the nice person who likely went out and purchased the gift. You told what the gift was (that way old lady Smith doesn’t think these are generic notes) and that it was your favorite gift (if in fact it was. Never lie). If it was money you received, never say the amount, just thank them for the cash.
Other tips: The thank you note isn’t from The Fischers or Mr. and Mrs. Fischer or Lisa and Kris Fischer which means the front of the note just has the person’s name who is writing the note. So that’s why when I got my niece her thank you notes for her wedding next month, I had her married name on there (to use after the wedding). It is for Courtney Gibson Endsley. She is now Courtney Gibson and is marrying Blake Endsley His name isn’t on there because he isn’t also signing the note. Men typically hate writing thank you notes. If he writes a thank you note to his squad, he needs notes with his name on them. A box of 50 will last him ten lifetimes.
I’m old-fashioned but you address them this way:
Mr. and Mrs. John Smith (and then you use “Dear Mrs. Smith” on the inside)
or
Mrs. John Smith
or
Ms. Sally Smith
I was taught that a woman uses her husband’s first name and Mrs. to denote she is married. If she is widowed, you can still do the same. I know that things have changed and this might offend you. I’m sorry. I’m telling you how I was taught and what Emily Post said in the 80s. I was taught that Ms. denotes either a single woman or a woman who is married yet isn’t using Mrs. because that is only used with his first name.
Confused? Don’t be.
Final thoughts: Can you email a thank you note? You can. But it’s in poor taste. At baby/wedding showers where you address your own thank you note, STOP IT. And don’t ever text one either. If someone went to the trouble to buy you a gift, go to the trouble to address a letter and put a handwritten note in the mail. When you run for dog catcher some day, people will remember that about you.