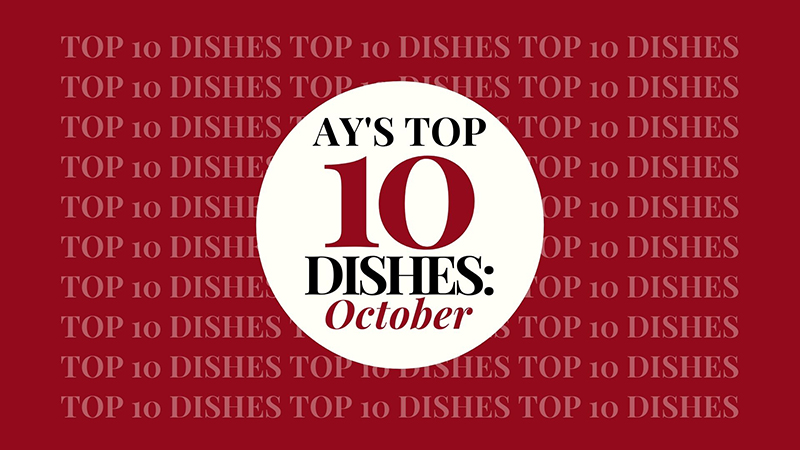 At the end of each month, I will take a look back at all of the wonderful things I have eaten over the past thirty days. Here is my top 10 dishes in October.

This dish is just as tasty as it is beautiful. Chef Owen cooks the duck to a perfect medium rare, then pairs it with a sweet potato puree, pickled onions, arugula, and a berry barbeque sauce. The result is a plate of food that is both refined and unpretentious, while tickling the taste buds with sweet, salty and smoky flavors. 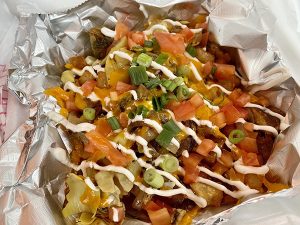 How does fried potato cubes topped with artichoke hearts, roasted Brussels sprouts, green onion, sour cream, tomato, sautéed onions and cheddar cheese sound? At Four Quarter Bar, this pile of food will no doubt fill you up on a cool evening on Main Street in Argenta.

Maddie’s has what seems like a million great appetizers on its menu, but you’d be hard-pressed to beat the meat pies. A pair comes in an order, and each is filled with tender, braised beef ribeye meat. Just make sure to dip each bite of the buttery-crusted pie into the accompanying jalapeno ranch. 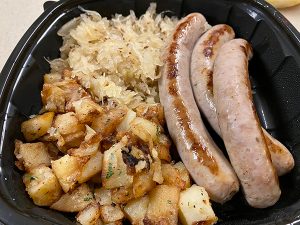 House Made Bratwurst at The Pantry West

With temps dropping, we are now officially into comfort food season. This means more trips to The Pantry West. There, consistency is king, and that includes the house made brats with sauerkraut and fried potatoes. The key is getting a little bit of everything in one bite, from the meaty brats to the tangy kraut to the crispy potatoes.

Old Mill Pizza in North Little Rock is definitely a spot you need to add to your pizza map. The toppings on my Supreme were plentiful and thoughtfully dispersed, but the super crispy bottom crust was what blew me away, as did the braided edges.

Is Cinnamon Crème Bakery’s cinnamon roll the best in Little Rock? Absolutely. The rustic, misshapen appearance coupled with a gooey, buttery, cinnamon interior and iced topping is just too hard to resist. Oh, and they are enormous. 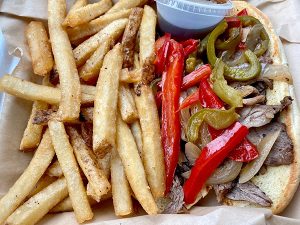 Prime Rib Sandwich at The Hangout

My first visit to The Hangout in North Little Rock was a good one, albeit only a quick grab-and-go for the Prime Rib Sandwich. This straightforward hoagie handheld was loaded with shaved beef and topped with onions and peppers. And don’t forget about the thick-cut perfectly fried French fries. 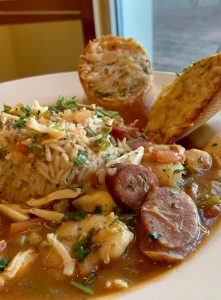 Etouffee? At Trio’s? Yes, and you must trust me on this one. Chef Merriweather forms a thick, rich roux, laced with bell pepper, onion, and celery, then adds an assortment of Gulf shrimp, andouille, and jumbo lump crab meat. Local rice ties it all together for a dish that can shockingly hold its own with the top-tier Cajun restaurants. 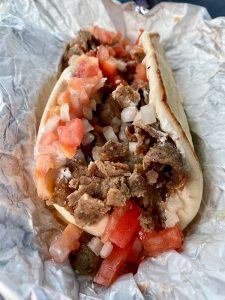 It’s a little bittersweet to write about the gyro from this past weekend’s Arkansas Greek Festival. Piled high with shaved meat, then finished with tzatziki sauce and diced, fresh onions and tomatoes, this gyro was absolutely fantastic, and maybe better than any I’ve had at the festival in past years. If you missed out, sadly you’ll have to wait until next year.

While I’ve bragged about Tacos El Gordo’s pastor tacos in the past, the truth of the matter is that their asada—little chunks of marinated beef—might be just as good. Each corn tortilla street taco is filled with the beef and a heavy hand of cilantro and chopped onion.