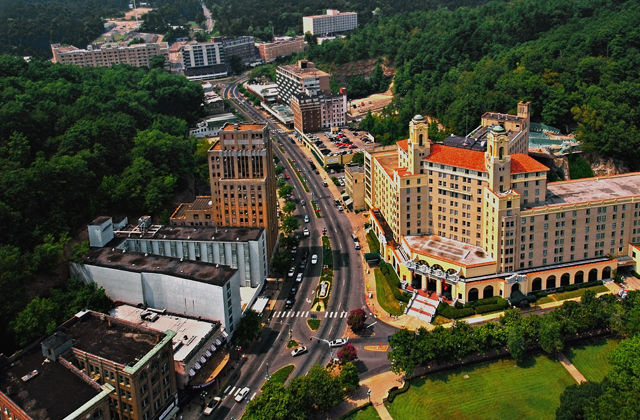 History abounds in the Natural State. With years and years creaking by and various renovations it’s a wonder some hotels maintained their historic suave. However, each of these destinations offers a little glimpse into Arkansas’ history and a greater understanding of what life looked like in earlier decades. Below are five historic hotels in Arkansas that are worth a visit. And who knows, you might even see a ghost or two at some of these locations.
Basin Park Hotel in Eureka Springs
This hotel has been offering dining, weddings, spa experiences, and lodging for over a century. It was built in 1905 and is located next to the Basin Spring in the shopping district of Eureka Springs. The Basin Hotel has been recognized by the Ripley Foundation for quite an astonishing reason. Every floor of the Basin Park Hotel is ground level, due to the fact that the hotel is built into a mountain. In early years of operation guests would go out through the different floors and explore the paths in the mountain. The hotel was also a little wrapped up in  the gambling era until a raid in 1955, because the hotel was selling “intoxicating liquor without a license” during the annual Barefoot Ball. This hotel has seen the roaring 20’s, a raid in the 50’s, Joe Parkhill’s  (a former manager) arrest for illegal slot machines and served guests through it all. This hotel certainly has an interesting past and is certainly worth a stop.
Arlington Resort Hotel and Spa in Hot Springs
Tales of the Arlington reach far and wide. How many of them are true, that’s up for debate. However it is undeniable that this hotel in Hot Springs is a historic gem. This hotel has seen three “eras”. Originally opened in 1875 the Arlington has been around for over one hundred and forty years, and when it first opened it was wooden, three stories high and had 120 rooms making it the largest hotel in the state for that era. That building was torn down in 1893 for a 300-room Spanish Renaissance structure which was referred to as “the most elegant and complete hotel in America” by Charles Cutter. Sadly this building burned down and the Arlington you see today was finished in 1924. The hotel was a haven for gangsters in the 1930s and Al Capone himself would rent out the fourth floor for his friends and family. Suite 443 was his favorite and is now called the Al Capone Suite, it even has a plaque on the door. There are various reports of paranormal encounters at the Arlington, however the best way to find out is always to see for yourself.
Read More About Hotels: The 21 C Museum Hotel in Bentonville
Capital Hotel in Little Rock
The Capital Hotel has been part of the capital city’s history since the 1870’s. It was originally the Denckla block, which was built to house offices, shops, and gentlemen’s apartments for businessmen. The Denckla block became a Hotel in 1877. The name came from Mrs. Morehead Wright, a woman from the area who stated it was a “capital enterprise located in a capital building” in the “capital of the state,” and she hoped it would be a “capital success.” Good way to capitalize on the location right? The Capital Hotel is considered to be the “front porch of Little Rock” and has been renovated numerous times throughout the years consistently keeping up with modern standards of class and comfort without losing its history. The hotel hosted many political and historical figures, including President Ulysses S. Grant. The hotel has an unusually large elevator, and legend says the large elevator size was so that Grant could take his horse up to his room. The hotel has been regarded as the hub for political announcements and served as President Bill Clinton’s local media headquarters during his tenure as President. The Capital Hotel is iconic, magnificent, historic and a worthy location to visit.
Hotel Seville in Harrison
The building in which Hotel Seville is located was originally opened for business in 1929 and played a significant role in the social life in Harrison for thirty years. The hotel was purchased and re opened twice throughout the 60’s and 70’s, and became the Town House in 1978. The hotel later faced a million dollar restoration in 2008 and the hotel you can stay at today was opened in 2012. The hotel is beautiful with old spanish architecture and Arabic inscriptions and wall decorations featuring the resplendent quetzal in gold and rich tints. The hotel houses cafe 1929 in which the furnishing only contributes to the historic atmosphere of the hotel. hotel’s history is unique as its architecture is beautiful, so consider seeing all it has to offer soon.
Crescent Hotel in Eureka Springs
Another historic gem is tucked away in Eureka Springs! This beauty is the Crescent Hotel. Built of native limestone in 1886, this grand Victorian hotel with a hand-painted lobby is set on 15 mountaintop acres not far from Downtown Eureka Springs. More than just the intriguing building there are also 15 acres of manicured gardens with hiking and walking trails that loop through the city and pass the City Dog Park, Skate Park and City Playground. The Hotel also features 72 rooms with upscale suites and 9 luxury cottages. The building and its grounds have been home to stables when the hotel was a prime carriage location in victorian days, a college for girls, a hospital and more. The hotel is also known as one of America’s most haunted hotels. During your stay you can even take a ghost tour. This fascinating hotel has been recognized by the National Trust for Historic Preservation as one of America’s Dozen Distinctive Destinations. There is plenty of history and a whole floor dedicated to hotel archives. This elaborate history is sure to keep you hooked.