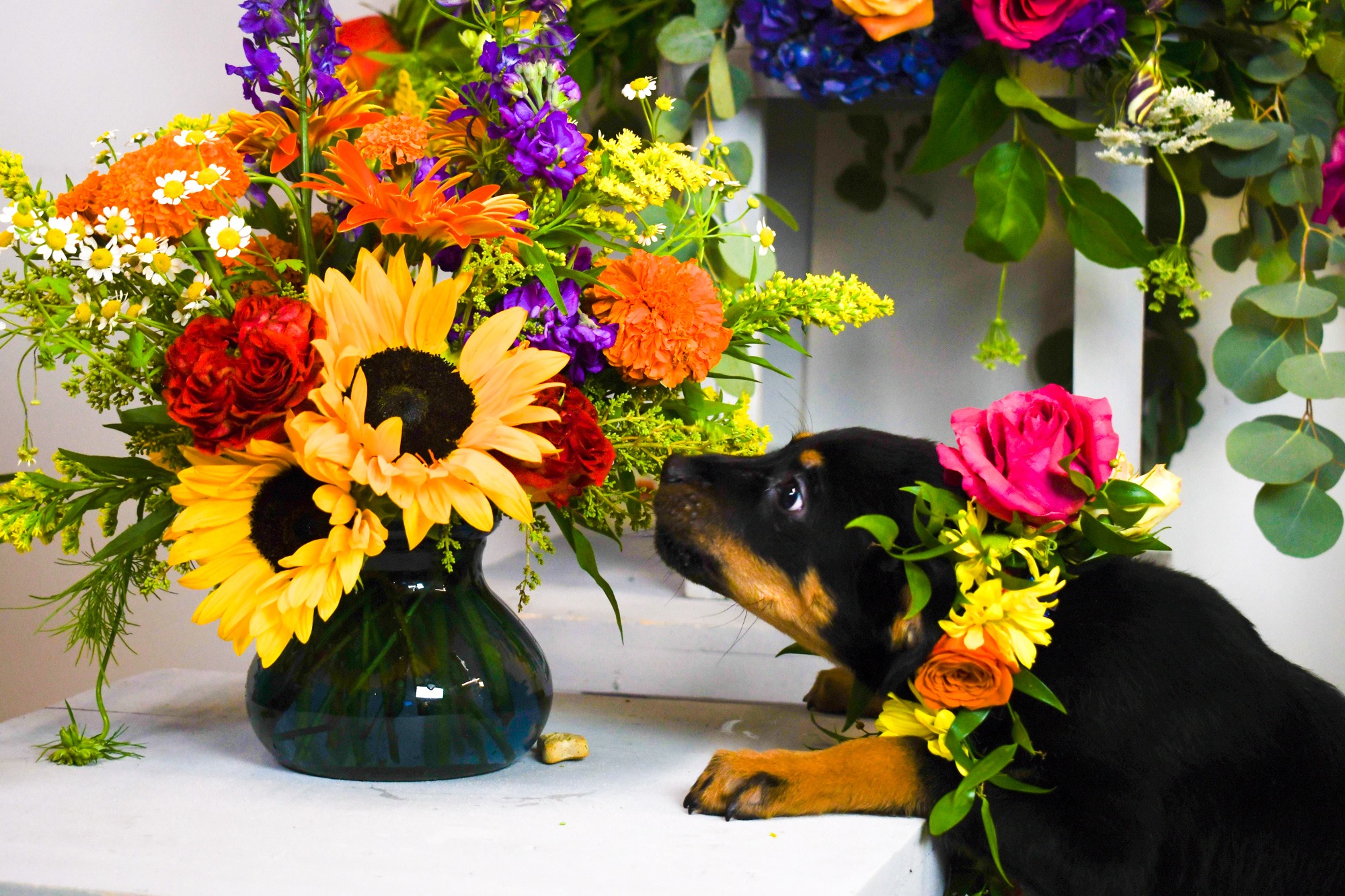 Listen to Heather Baker discuss some weekend events this morning on 103.7 The Buzz below.

Today is arguably one of the most important holidays as it’s all about the dogs in our lives: National Dog Day. Tipton & Hurst is kicking off this special day with the Humane Society of Pulaski County (HSPC) through a fundraiser benefiting the animals available for adoption at HSPC. Grab your doggo and take them to Tipton & Hurst for pet portraits at a $5 minimum donation fee. There will be a greenery backdrop, floral collars and props to make your dog feel like the kings and queens they are.

Keeping the puppy-love going, Bar Bar is hosting a National Dog Day party for our furry friends. Bring your dog for “pawdicures,” swag and prizes and a selfie station to prove you’re best friend is the cutest. Register your dog here to celebrate!

What: Pups On the Patio

Take your dog(s) to Chick-fil-A for some sunshine on the patio. The Cantrell location is partnering with Rescue Road, a local dog foster care program. The first 40 dogs to bring a donation to Pups on the Patio for Rescue Road will receive a bandana. Chick-fil-A asks that you make sure your dogs are leashed and comfortable around other doggos.

The annual Pine Bluff Art League Exhibition opens Thursday night with a reception. Juror Byan Masses, chair of the University of Central Arkansas’ Department of Art and Design, will judge the league members’ recent works exhibited at the showcase. Massey will award a Best in Show, First, Second, Third and Honorable Mention prizes. The exhibition will remain on display through Nov. 27.

Fayetteville Roots has changed up the show a bit to accommodate for COVID-19, but nonetheless, the show is on. Headliners include Shovels & Rope, Watchhouse, Capitol Sun Rays (Amy Helm, Luther Dickinson and Graham Lesh), and more. Tickets are currently sold out, but visit the Fayetteville Roots website to stay up to date.

Open Tuesday, Aug. 24, the Washington County Fair is still rolling. The fair includes a petting zoo, amusement rides, demonstrations and special events that you have to go to the fair to experience. Tickets are $5 for adults, and children ages 6 and under get in free. Unlimited ride armbands are $20-$25. Tickets are purchased at the fair.

The Saline County Junior Auxiliary chapter invites everyone to attend the 12th Annual Putt the Kids First Golf Tournament benefiting the children of Saline County. The fee for teams to participate is $425, and individual player fees are $125. There will be a lunch, beverages and goody bags included in the participation fee. Participants may compete in a hole contest and a putting contest for the chance to win prizes. Register here to participate.

Open to all, the Nabholz Bike and Brew takes you around Bentonville with five featured stops along the way. Riders have the option to make their trip “Poker Style” by purchasing a poker card. At each of the featured stops, Poker riders may draw a card. At the end of the ride, the winning hand will receive a Grand Prize (Schwinn Armature Electric Bike). Bike and Brew supports the non-profit Speakup About Drugs. This organization offers support, education and advocacy efforts to families and individuals affected by the drug epidemic. Main Street Member tickets are $30, and non-member community rider tickets are $50. For attendance to the after-party only, (food, brews, live music and a Chris Clark bicycle stunt show), member tickets are $25 and non-member tickets are $35. Register for the event here.

The pandemic has given us a smackdown for the past year and a half, but not like the one coming to Simmons Bank Arena. Becky Lynch, Bianca Belair, Seth Rollins, Finn Balor and The Mysterio’s vs. Roman Reigns and The Bloodline and many more favorites will be there and ready to win. Tickets start at $24 and can be found here.

What: Riffs at Stifft featuring Townsend

Local musician Townsend is getting the weekend started at Stone’s Throw. Pizza will be served by the slice from Pizza D’Action, and there will of course be plenty of brews and beverages for the perfect night.

What: Pyro in the Park

Attend the Travelers vs. Corpus Christi game, but stay for the fireworks. The largest fireworks display of the year, Dickey-Stephens pulls out all the stops for Pyro in the Park. Get your tickets to the game here.

Learn more about the great Natual State and the cultural heritage that lies in the foundation we’ve built upon at the Arkansas Heritage Festival. There will be live music, dance performances and insight into the Arkansas culture. Free to attend, but still sign-up to save your spot! Non-members of Hot Springs Village must have a pass to get into the community. Find the full schedule for the weekend here.

Baseball history is deeply rooted in Hot Springs, with many legendary names and teams having stayed in the Spa City. The 4th Annual Hot Springs Baseball Weekend is here to celebrate all the history coursing through Hot Springs. Join St. Louis Cardinals centerfielder Jim Edmonds, Hall of Famers Goose Gossage of the Yankees, Andre Dawson of the Cubs and “The Mad Hungarian” Al Hrabosky of the St. Louis Cardinals this weekend. The weekend kicks off with preview tours of the new Majestic Park.

SOAR NWA is back this weekend for a day of hot air balloon activities, aeronautic events, circus performers, kids zone, a beer garden, live music and more. Proceeds from the event will benefit Open Avenues, an organization providing employment opportunities for people with disabilities. Online tickets are $15 for adults and $5 for kids 10 and under. Ticket prices will increase on the day of the event. Purchase tickets here.

The Arkansas Martin Luther King Jr. Commission is traveling to Washington D.C. for the 58th anniversary of March on Washington. Simultaneously, the organization is hosting a “Pre-March on Little Rock” and “March on Little Rock” in commemoration of Martin Luther King Jr.’s historic speech. The Pre-March on Little Rock Rally will begin on the steps of the Pulaski County Courthouse at 8:30 am, and at 9:45 am, the march will begin on Markham Street heading toward the Capitol. Attendees are encouraged to practice social distancing during the march and follow current mandates in effect.

The most attended high school football game in the state, and the most competitive, Salt Bowl 2021 is this weekend. Blue or maroon, Hornet or Panther, choose your side and enjoy tailgating festivities in the War Memorial lot prior to the game at 7 pm. Purchase tickets and T-shirts at any Saline County Big Red store for the “Together Again” game.

Missing the sound of classic Delta blues? No worries, the Chad Marshall Band is coming to Four Quarter Bar. For only $7, you can enjoy a good drink while being carried away by the sweet sounds of the band.

The Quapaw Quarter Association is hosting an event for the whole family with ice cream from Loblolly and George Bros. Historic Arkansas Ale from Stone’s Throw to celebrate the German heritage of Little Rock settlers. The Loblolly ice cream will feature flavors from local ingredients used in making beer. Tickets for adults are $25 and $15 for children. Prost!

What: Backwoods at Mulberry Mountain

We’ve all missed music festivals, and Backwoods is here to make up for all the ones missed the past year. The Disco Biscuits, Arkansauce, Ganja White Knight, Bumpin Uglies and many, many more bands are lined up to be on the mountain. Tickets start at $54 and increase depending on accommodations.

Where: Bar of Ranch in Clinton (Clinton)

For an entire week, Bar of Ranch is hosting a full schedule of events surrounding the Chuckwagon Races. Poker Run on horseback, roping, live auctions, clinics and so many more events are in store from August 28 to September 5. Admission for August 28 to September 4 is $35 per day, and admission for September 5 is $20. Tickets for children 6 through 12 are half of the adult admission price. Find the full schedule here.