Listen to Heather Baker’s Weekend Plans every Friday morning on 103.7 the Buzz. 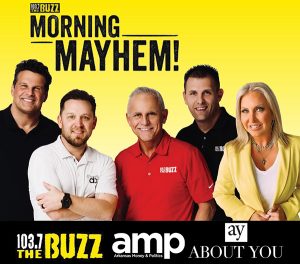 Where: The Hall (Little Rock)

Have you been to the newest live music and events space in Little Rock yet? If not, this is the perfect opportunity to become acquainted. Live music, vendors, food and drinks are all waiting for you in this new venue.

Nothing says “I love you” quite like sugar cookies — at least that’s what we say over here at AY Media Group (in case anyone would like to send us sugar cookies). For those that agree, UA-Pulaski Tech Culinary Arts and Hospitality Management Institute is hosting a Valentine’s Day-themed Sugar Cookie Decorating class. Chef Kelli Marks goes step by step on how to bake the perfect sugar cookie and make icing using a variety of techniques. Learn about sprinkles, icing and everything you could possibly need to create masterpieces of baked goods. The best part is you get to leave with a dozen holiday-themed cookies. Find more information and registration here.

What: Point of View

A new exhibit is opening its doors at Mid-America for the year of 2022, and as always, it’s a fun one. “Point of View” promotes the worldwide phenomenon of taking selfies with a special for patrons to take their self-portraits. Adjacent to the selfie station is an area displaying cameras and photography for a glimpse into the history and science of photography. Patrons are encouraged to post their selfies to Facebook or Instagram with the hashtag #MASMSelfie.

The Moonlight Madness annual shopping event is back to bring shoppers extended hours, restaurant specials and the best shopping specials of the year. Merchants are providing access to end-of-season and holiday items at insane clearance prices. Shopping hours will be extended until 7 p.m. Explore the Downtown Conway area and the unique restaurants they have to offer.

Where: The Ballroom on Shackleford (Little Rock)

Throw on your dancing shoes and shake some tail feathers with the Ballroom, Latin and Swing Club. This month is East Coast Swing Month at the Ballroom, and Rick and Sarah Pinedo will be leading an East Coast Swing dance class from 7 to 7:30 pm. Members of the local West Coast Swing Dance community will be joining in on the fun, and the club’s usual ballroom and Latin dances will of course all be on the dance floor. Because of all the fun, the dancing hours will be extended to 10 p.m. Find more information here!

The Arkansas Marine Expo is back for its 40th annual iteration this weekend. This year’s Marine Expo will showcase all varieties of boats, including a great selection of bass boats, deck boats, ski boats, wakeboard boats, duck boats, party barges and personal watercraft along with discount fishing tackle. There will also be vendors on-site to share information about the local waterways of Arkansas, as well as vacation destinations for your next Arkansas getaway.

The Winter Olympics might only be a week away, but the second biggest sporting event of the year is happening this weekend. The UCI Walmart Cyclo-cross World Championships are happening now in Fayetteville with cyclists from more than 30 countries. This is only the second time in history that the United States is hosting the UCI Cyclo-cross World Championships hosted by Walmart. For those that are unfamiliar, cyclo-cross is a discipline of cycling that combines mountain biking and road cycling. The course is run through obstacles and natural elements such as mud and sand. Six rainbow jerseys will be awarded and this year is bringing the first-ever team relay event. Obviously, you don’t want to miss the momentous event, so find your tickets here and schedule above.

Where: The Weekend Theatre (Little Rock)

“The Nether” is a virtual wonderland that provides users with total sensory immersion. Log in, choose an identity and live your fantasies. All seems well until a young detective uncovers a disturbing brand of entertainment and ventures into the darkest corners of the imagination. This play is written by Jennifer Haley and directed by Chris Klinger. Find out what lies within the Nether and get your tickets now.

If you’re constantly absorbed in paranormal investigation shows, stories and books, might we suggest attending the Eureka Springs Paranormal Weekend? Located at the Crescent Hotel, the most haunted place in the state and one of the most haunted hotels in the country, attendees will take part in a guided investigation and behind-the-scenes access to areas of the hotel with high paranormal activity. Attendees will also have admission to the nightly ghost tour, ESP Mask, discount to the Basin Park Paranormal Investigation and seminars with seasoned paranormal investigators. Anything you could possibly want to learn or experience is happening at Eureka Springs Paranormal Weekend 2022. This event is running this weekend (Jan. 28-30) and next weekend (Feb. 4-6), so choose which works best with your schedule and register here!

You’ve heard “Taste the Rainbow,” but now is your chance to “Catch the Rainbow.” If Skittles aren’t your forte, that’s perfect because it’s rainbow trout we’re catching. The Arkansas Game and Fish Commission invites you to come out to fish and win some prizes. Lunch will be provided to attendees while supplies last — all you need to bring is your bait, an Arkansas fishing license and a trout permit. Register here!

What: Muffins and Music

It’s been a bit chilly out, and the kids are probably climbing the walls at this point from being cooped up. Get outside this weekend with Music Together Shake, Rattle, Sing at Allsopp Park. Throw on some jackets, but you’re sure to stay warm because you and your little ones will be singing, dancing and playing with props and instruments. Once everyone is done partying, stick around muffins, coffee and hot chocolate.

What: Search for Sheds

We’re searching for sheds this weekend, and no we don’t mean the ones you store your decoration in. Antlers are of the fastest-growing body parts in the animal kingdom, and Arkansas’ white-tailed deer grow a new set every year after “shedding” their old rack. Witt Stephens Jr. Central Arkansas Nature Center will share tips on when and where to search for sheds, and shed dogs will a live demonstration of their skills while their trainer gives a few pointers on how to train your own best friend to find shed antlers. If you’re looking to learn more about the natural world and these beautiful creatures, this is the event for you.

Sometimes getting your hands dirty is exactly what you need to reset, and Nexus Coffee has your hook-up. Chris Swasta with Rolling Hills Pottery will be at Nexus Saturday afternoon for a small workshop on how to make coil pots. For the first 15 minutes of the session, Swasta will demonstrate the process on the banding wheel, and then it’s your turn to sink your fingers into some clay. A class for all ages, bring your family to make new memories. The fee for the class includes tool rental, clay and two kiln firings. Happy throwing!

Knick knack, patty wack, Ludacris is back. Catch the rapper at JJ’s Live Saturday night for a party with favorite jams and new hits. Tickets are selling out, so get yours now “cause ‘tomorrow’ ain’t promised ‘today.’”

The Rocket Man is in Little Rock for the rescheduled performance of the Farewell Yellow Brick Road Tour. The concert was originally scheduled for July 3, 2020, but was postponed due to COVID-19. All tickets purchased for the original date are still valid, and there are still a few seats floating around for the taking. Find more information here.

What: Kiss the Brides Expo

Still looking for a venue? How about a photographer? You’re in luck because the Kiss the Brides Expo is happening this weekend. Engaged couples and friends are invited to attend the Expo for information and ideas to move the dreaded planning process along. Vendors will be lined up and ready to share why you should choose them for your special day. There will also be giveaways, fashion shows, games and more, so get your tickets now!

Peanut, Walter, Jose Jalapeno, Bubba J., Achmed and the hand behind the characters, Jeff Dunham, are rolling into Simmons Bank Arena. After taking a year off from traveling around the country performing, Dunham and his friends are back to finish their tour. This time, there’s a new face stuffed into the suitcase with the other personalities – Url, the grandson of Walter who lives online in his parent’s basement and knows barely anything of the world outside of his phone. Find more information and tickets to the laughs here.

READ MORE: Tan France to Speak at the University of Arkansas in February