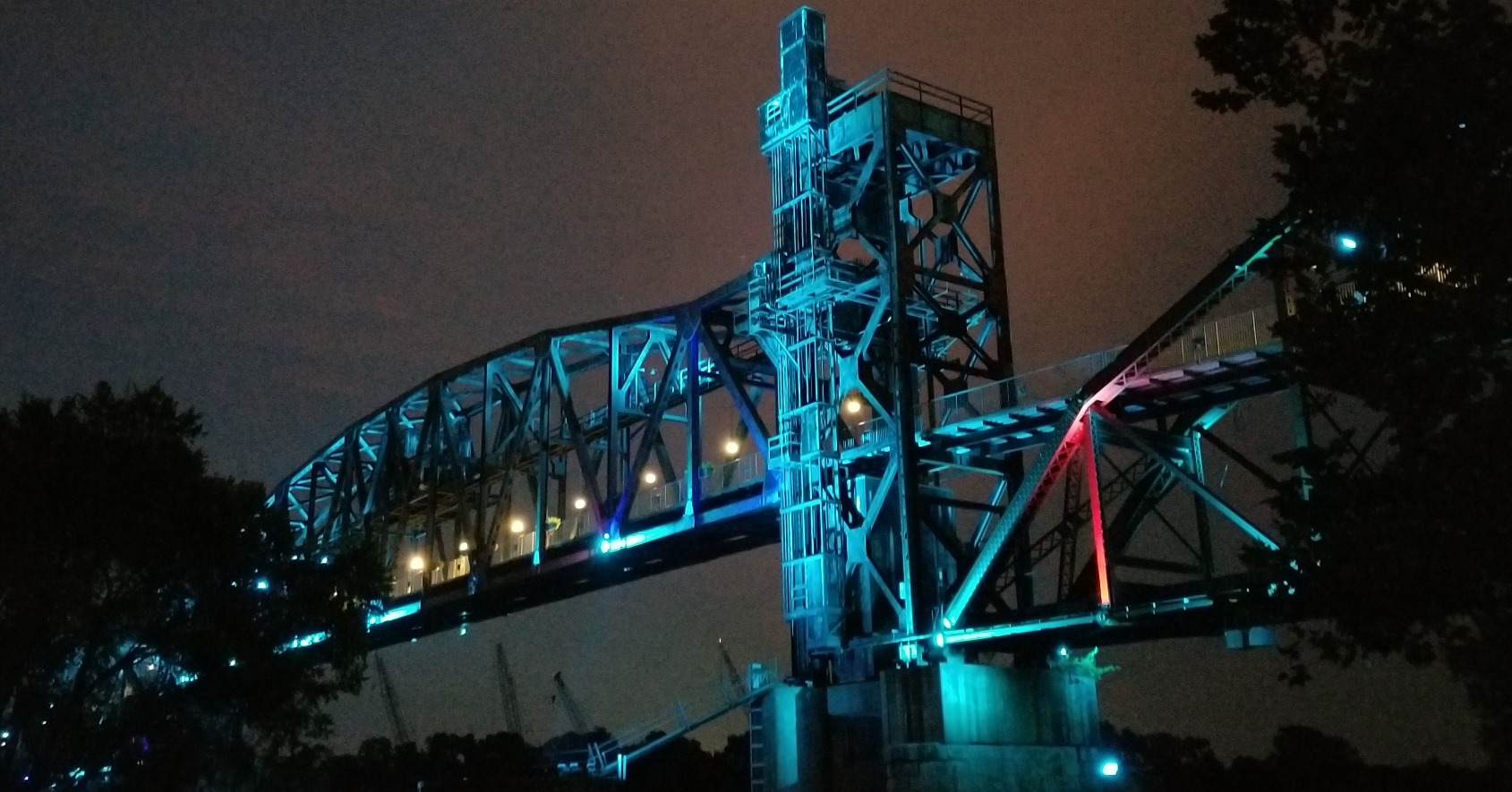 Listen to Heather Baker discuss some weekend events this morning on 103.7 The Buzz below.

Everyone’s favorite, Tails & Tunes, is back for the month of September! To get the month started, Cliff & Susan will be performing at the Civitan Elephant Stage. Guests can stay late roaming through their favorite exhibits and then head to the stage for music. Food vendors and beer and wine will be available for purchase. Reserve your tickets here.

In honor of Ovarian Cancer Awareness Month, the Clinton Presidental Library bridge is turning teal tonight. The library will be honoring survivors and remembering those who passed. Join the library in celebrating the lives of all those affected by ovarian cancer.

Classic cars and classic burgers — what’s better than that? The first Friday of every month is a special day for the North Little Rock location of David’s Burgers, and sadly, the fun will come to a close next month. All car fans and clubs are welcome to attend with their favorite rides. And don’t forget to order a few of David’s famous burgers.

Downtown Russellville’s Art Walks have been voted “Best Local Event” multiple years in a row, so the board of directors of course had to bring it back — with masks and social distancing encouraged. Local artists will be featuring their art down the Main Street strip with participating businesses. Witness the talent in the community!

What: First Friday Market: Off to the Fair

The city of Camden is hosting “First Friday Market” on the, you guessed it, first Friday of every month. In lieu of fair season about to begin, this week’s theme is “Off to the Fair.” The Ouachita Country Fair Board will be at the Market with armbands for carnival rides, a petting zoo and a mechanical cow for children to “milk.” Featured author at Hollis Evans Floral, Nyla Clemons, a ninth-grade student at Bearden, will be at the Market to talk about her book Cloaked in Flames. Brody McKinney is bringing the live music, and guests are encouraged to bring their lawn chairs and relax. Hit up the local vendors that will set up around the area, and be sure to visit with local organizations and nonprofits to learn more about their cause. To top it all off, Miss Arkansas Whitney Williams will be in attendance to chat and take part in the late-night market.

For no cover charge to get in, head to Stifft Station’s Stone’s Throw for local musicians Tai Nishiuchi and Jameson Burton. Pizza will be sold by the slice from Pizza D’Action and house-brewed beer and cider on tap.

The Hot Springs Blues Fest is back for two days of horns and soul. Local favorites Spa City Youngbloods, The Ghost Town Blues Band, Port City Blues Society Players and others are lined up for the weekend with diverse takes on the blues sound. Find the full schedule of musicians here. Come ready to rock, relax and reset with good music, good food and good drinks.

What: 5th Annual No Limit Riders

No Limit Riders is back with a weekend dedicated to bikers and bike enthusiasts. Friday kicks off with a few parties hosted by DJ Jock, DJ Tic and few others that will keep the fun going to the next night. Saturday includes a day party at Rock City Harley followed by a Harley Cruiser Bike Show and Best In Show Sling Shot. Find more information and the schedule here.

The John Cain Foundation organized the Arkansas Rasta 5k Run/Walk and Reggae Jam Down to celebrate love, peace, unity and the culture of reggae music. The Reggae Jam Down will take place before and after the race, along with vendors, food trucks and more. Each participant in the race will receive a Rasta Madallion at the end of the 5k to celebrate their completion. A portion of the proceeds will be donated to the John Cain Foundation. Find more information and sign-up here.

The Sylvan Hills United Methodist Church is trying to beat its record of donating 4,959 pounds of food to individuals and families of the community in need, with a goal of 5,000 pounds this month. On the first Saturday of every month, the community is invited to participate in the Drive-in and Drop-off event by Sylvan Hills United Methodist to help support food-insecure individuals and families. The nonperishable item of the month for September is canned pasta.

Join Linda Howell and members of the Arkansas Ghost Catchers for a tour of the Haunted Arsenal in the MacArthur Museum. The arsenal dates back to 1840, and the story goes that many of its previous inhabitants are still hanging around. Tour guests will be able to explore rooms of the building that museum guests are not allowed access to. Of these forbidden places is the tower where Sarge is known to linger. Using equipment for contacting the spirit world, the Ghost Catchers are allowing tour guests to see firsthand the entire process. Starting this weekend, the Haunted Arsenal tours will be held every Saturday of September. Contact Linda Howell at (501) 681-3857 for reservations and more information.

Skillet is in Arkansas for the Magic Springs concert series, and you know the drill by now: grab your chairs and blankets to relax in one of the final summer evenings of the year. Season and day passes to the park are tickets to the concert.

Antiques, repurposed items, vintage clothing, jewelry, handmade goods, architectural rescues, farmhouse decor, seasonal planting and food — is there anything Downtown Junk Fest doesn’t have? From 9 to 5, as Dolly Parton might say, head to Old Town Van Buren on Saturday and Sunday to find your goods.

What: Live Music on the Patio

Trey Johnson is headed to the patio at River Bottom Winery for both Saturday and Sunday. There will be fans (both people and the machines that blow cold air), chilled wine and wine-a-ritas available to order. Grab your friends and enjoy two nights of music and drinks.

September is Hispanic Heritage Month, and Magic Springs is helping the celebration get started with a performance by La Maquinara Nortena. The group will be joined En La Animacion, El JR and Conjunto Acero. As a special addition to the party, Sunday concerts allow guests to bring coolers of their favorite food and drinks (non-alcoholic). Season and day passes are tickets to the concert.

The Nashville-based alternative rock band Betcha is coming to Stickyz to show what this group of college best friends can do. Betcha has opened for The Band Camino at the Rev Room, so this isn’t their first time in Little Rock. They’re back for more. Doors open at 7 pm and the show will start at 8 pm. Reserved seat tickets are $12 per person in advance and sold as table reservations. General admission, or standing room, is $10. Find more information and ticket sales here.

After a three-year hiatus, Hot Springs’ Labor Day fireworks display is back. The show will be synced with music on 97.5 FM US97 Country for spectators to enjoy. The fireworks will be shot from the middle of Lake Hamilton on the east side of Highway 7 at the first highway bridge opposite the Doubletree Hot Springs. So find your perfect spot in that area!

Bonzai BMX is bringing a full weekend of BMX riding for riders and spectators. There will be food, drinks and many opportunities to hang out with the BMX community. Find the full schedule here, including entry fees for the State Qualifier and Arkansas State Final.

What: Arkansas Travelers vs. Wichita

This weekend marks the last home games of the season for the Travs, so get your tickets now. There will be fireworks both Friday and Saturday nights to celebrate the season at Dickey-Stephens. Find the schedule of this weekend’s games and the next few weeks of away games here. Get your tickets here.

The fair fun kicks off this weekend for the Hot Spring County Fair. Bringing the new and old together, the fair will feature favorite attractions and events along with a few surprise events for the entire family. Find more information and a schedule of events here.