Touching All the Bases: Beyond Sports Lab 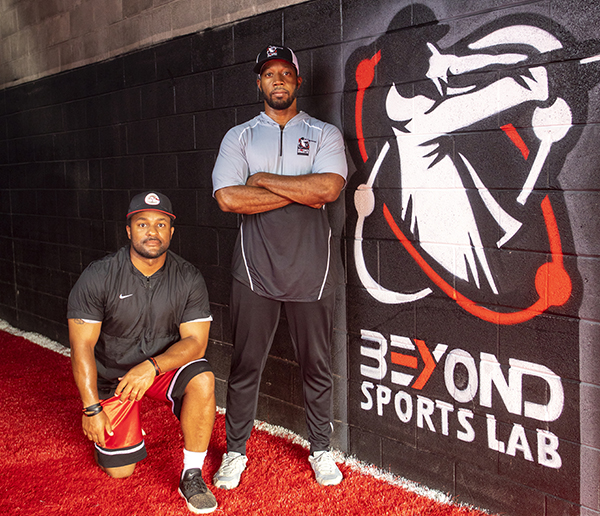 Touching all the Bases: Beyond Sports Lab Seeks to Harness Power of Sports to Teach Life Lessons

Like a lot of kids from their generation, Jason Bradley and Jerry Bruce grew up on the ballfields of their youth. Whatever was in season, or whatever the group assembled to do, that was the game of choice. Both were talented enough to graduate from the playground to the ranks of organized sports, excelling at the high school level and beyond.

But ask either of the Pine Bluff natives today what the real value of their athletic competition was, and they don’t talk of batting averages, touchdowns scored or trophies won. Instead, they preach on the work and discipline required to excel, and the unique blend of individual accountability and commitment to teamwork that sports require.

If that sounds like a coach talking, that’s precisely what Bruce has been throughout his professional life. And if it sounds like a noble cause, that’s exactly what he and Bradley have built their new venture around with Beyond Sports Lab. The North Little Rock training facility, which opened at the first of the year, seeks to reinforce life lessons while training young athletes to be their best. 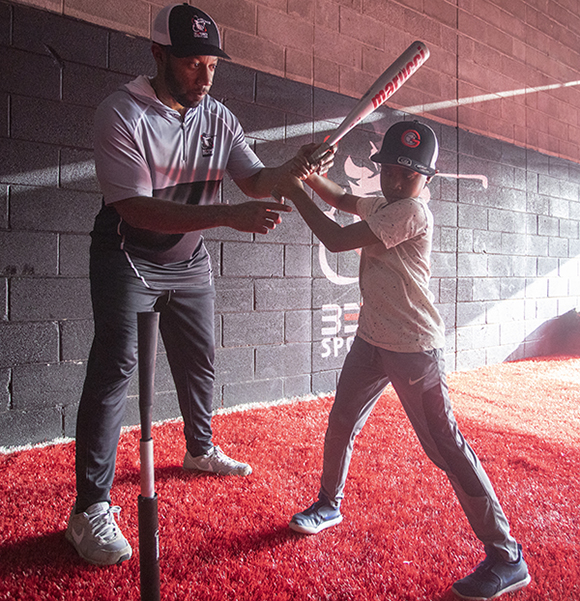 The business comes online during a shaky period in baseball’s history insofar as attracting young participants and fans. USA Today reported in 2017 that less than 7% of its viewers are under age 18, and the Great American Pastime has had similar struggles attracting players as it once did. This is particularly true among inner-city youth, who once saw baseball as a way out of dire circumstances, but now have left in droves for football and basketball as a way up.

The struggles of Little League and school-based baseball teams in attracting athletes has been blamed on everything from the pace of the game being too slow for today’s youth to the fears parents have of the safety of their kids playing outdoors. Bradley and Bruce have another, more direct explanation as to why the game has lost its hold on key demographic groups of players.

“It’s a conversation that a lot of people don’t want to talk about,” Bruce said. “Minority youth don’t have the opportunity to get pitching lessons, hitting lessons. They don’t get a chance to really learn the right way to play baseball, which turns into lack of a skill set. This isn’t just within this community or Arkansas, but really all across the country.

Bradley said the situation in baseball is a vicious cycle: As fewer young Black players get in, fewer advance to the upper echelons of the sport. Even the Razorbacks’ success of late doesn’t hold an inner-city kid’s attention like the NBA or NFL, where Black athletes are far more prominent, Bruce said. 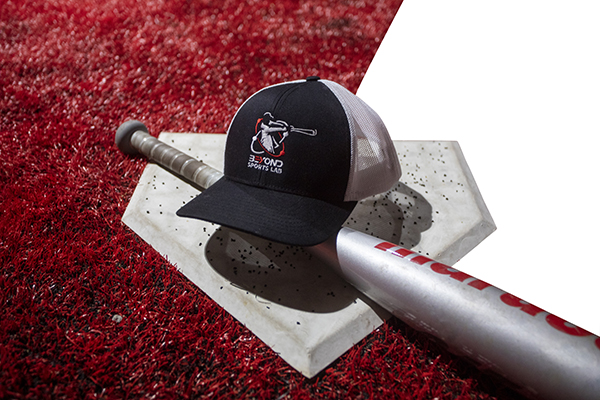 “Growing up in Pine Bluff, we loved baseball. Baseball is like the thing to do,” Bradley said. “We’d go outside and play catch, play ball. When we watched TV, Major League Baseball, minorities were featured in the advertisements and commercials — from Deion Sanders to Marquis Grissom to David Justice to Fred McGriff and Barry Bonds and Rickey Henderson. We knew those names. Those were household names. I was able to see those guys and be like, ‘Oh, that guy looks like me.’ Our kids now, they don’t see that.”

These realities led the entrepreneurs to their current business venture, a facility that not only provided excellent coaching and strong male role models, but a minority-owned business that understood the background and challenges of its clientele, starting with economics. One-on-one coaching is far more affordable here than at other training facilities, where fees can run upwards of $100 an hour, or even by the half-hour, well out of reach for most single-parent and low-income households. 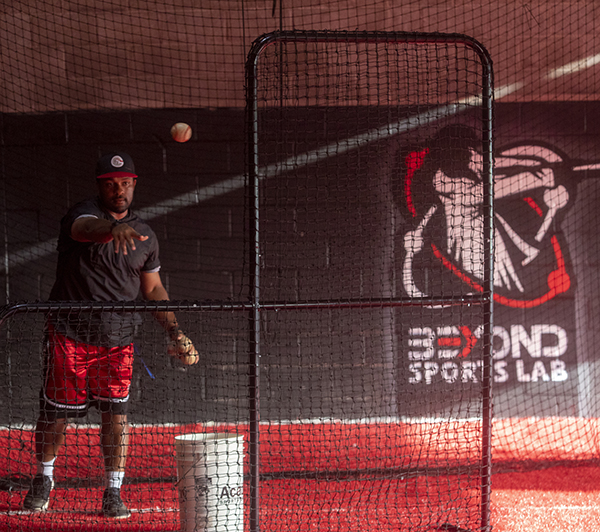 But even charging less doesn’t reach everyone, and so the partners are working to secure sponsorships by which any kid can afford to get lessons and develop a love for the game. This mission-driven approach to a for-profit business is another way Beyond Sports Lab sets itself apart.

“We live off sponsorships,” Bradley said. “That’s our bread and butter. We sell sponsorships in order to basically adopt kids to come out and train. We definitely push that when talking to big corporations or small corporations.” 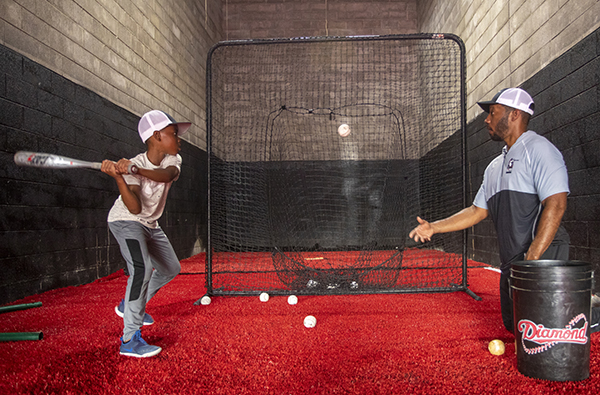 Though still in its early stages, the partners have big plans for the future of the company by expanding its focus to other sports. Softball is the most logical next step, but they’d also like to eventually cater to other athletes to work on specific skills or general athletic attributes like speed and explosiveness.

“We don’t want to count our eggs before they hatch, but at the same time, in terms of softball, softball is the same exact setup. So just copy and paste what we’ve done for baseball,” Bradley said. “With other sports, our goal is to make it an all-inclusive thing where maybe soccer teams come in and rent the facility or even maybe a track team, if it’s too wet outside and they want to come in and work on explosiveness, etc.

“That’s why our name is what it is, Beyond Sports. We want to be able to allow our facility to bring kids in and help them train on their skills within their sport, so they have an environment and a culture that builds them up kids beyond just sports.” 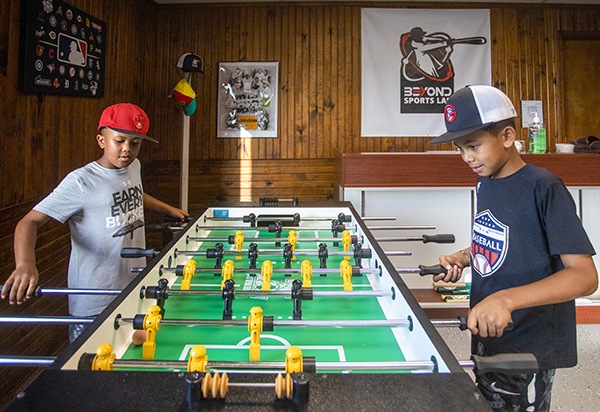 Bruce added, “The response has been great. We’re taking it slow. This is a marathon for us. We don’t have to do everything in one month and two months and six months. We’re taking our time and continuing to work on building the foundation first.

“I may not be here to see all these kids grow up and be all they can be, but I know that we’re supposed to do our part. I know that there are hundreds or thousands of kids that we can impact. And I know that they’re going to be better off from being around and involved in what we’re doing.”