Tour Arkansas: Visiting Some of the Natural State’s Lesser-Known Attractions 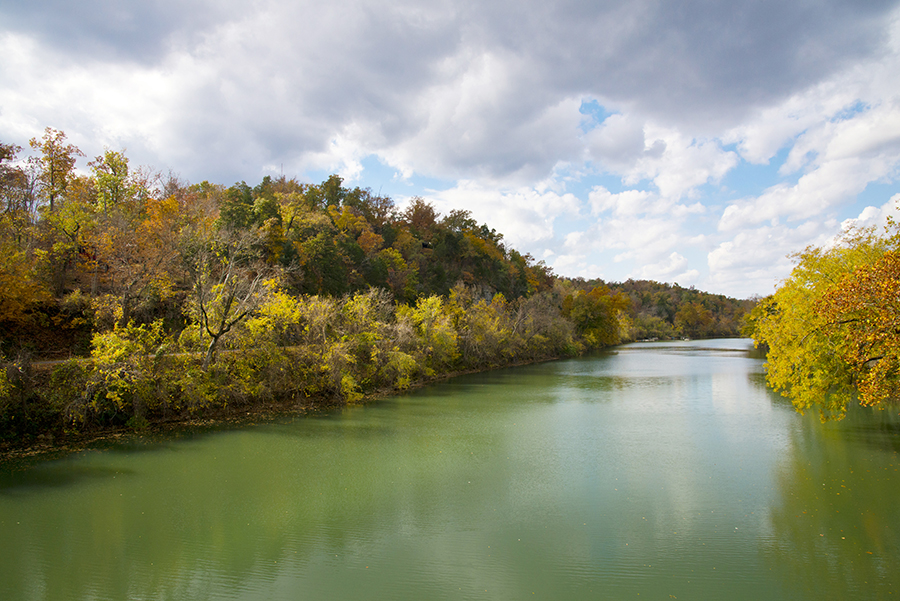 by Joe David Rice | Photos Courtesy of Arkansas Department of Parks and Tourism
Arkansas is chock-full of celebrated attractions, places such as the Old State House, Crystal Bridges, the Buffalo National River and Crater of Diamonds State Park. It’s my privilege this month to share lesser-known options for Arkansas vacations. By following these ideas, you can enjoy exciting new experiences and spend more time relaxing than being confined in a car while driving to distant locales. In short, an in-state getaway is easier on the mind, the body and the pocketbook.
There are so many choices within Arkansas’ 53,178 square miles that I’ve decided to divide the state into five regions – northwest, northeast, central, southwest and southeast – and present a recommendation for each. A similar list will be shared next month. 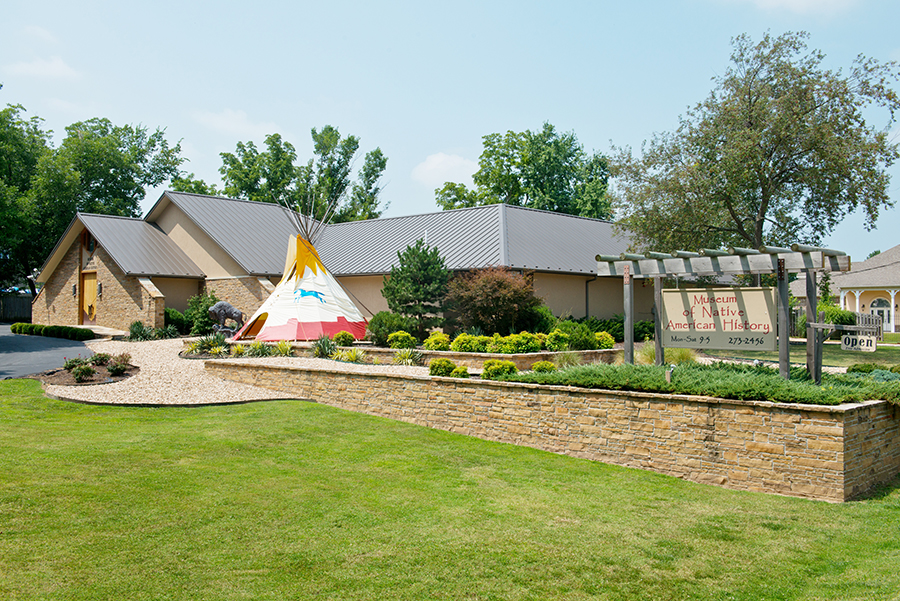 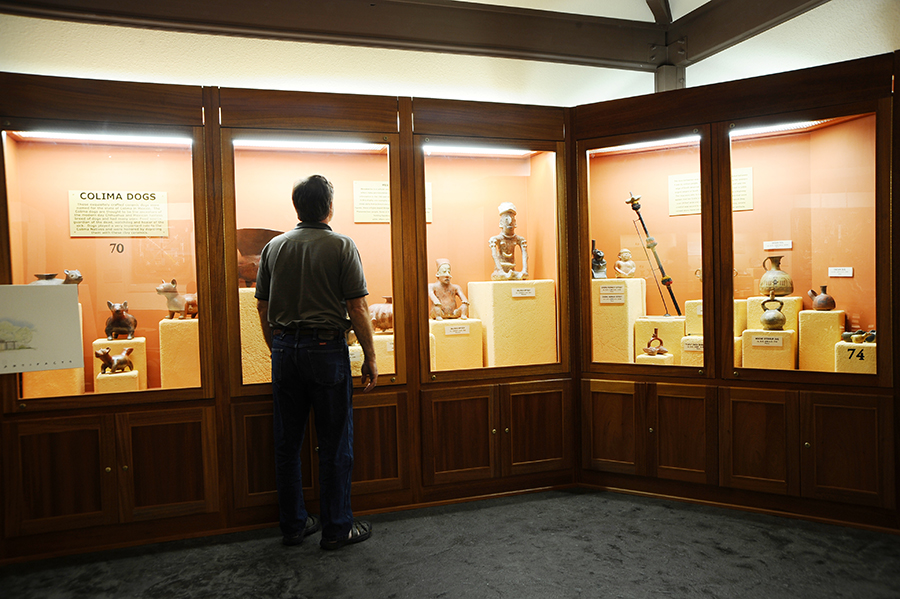 We’ll start with Northwest Arkansas, and the suggested destination is the Museum of Native American History in Bentonville. Opening in its current building in 2008, the museum was founded by David Bogle, a Bentonville native and member of the Cherokee Nation. With a collection of more than 10,000 artifacts, some of which are over 14,000 years old, it provides a fascinating stop for all ages. Children are especially drawn to the skeleton of Tusker, a 12,000-year-old wooly mammoth. The first-class exhibits, arranged in chronological order, span five different periods of Native American history and include not only North American civilizations but also those from Central and South America.
Conveniently located at 202 Southwest “O” Street, the museum is open Monday through Saturday from 9 a.m. to 5 p.m. (closed New Year’s Day, Thanksgiving and Christmas Day). Check out the website – monah.us – for complete details. Families on a budget will appreciate the free admission to the Museum of Native American History.
Heading east across the top of Arkansas brings us to the Spring River, our northeast Arkansas attraction. Largely overshadowed by the Buffalo River, the Spring River is the state’s most reliable float stream – and that’s due to 9,780,000 (yes, you read that correctly: 9.78 million) gallons of water flowing every hour from Mammoth Spring, one of the world’s largest springs. Recognized as a National Natural Landmark, the spring has been protected as an Arkansas State Park for over 50 years. It’s about 15 miles north of Hardy on US Highway 63, immediately south of the Arkansas/Missouri state line.
Canoeists accustomed to the pool/shoals routine on the Buffalo and other Ozark streams will be surprised by the Spring River. There are plenty of pools to be sure, but they’re interrupted by rocky ledges (some as high as 6 feet), making for challenging excursions, plenty of photo opps and wild tales of surviving plunges over waterfalls. Several outfitters are eager to introduce you to the Spring River, but remember this is a spring-fed stream – and the crystal-clear water is a chilly 58 degrees. Information on local outfitting services can be obtained from arkansas.com. 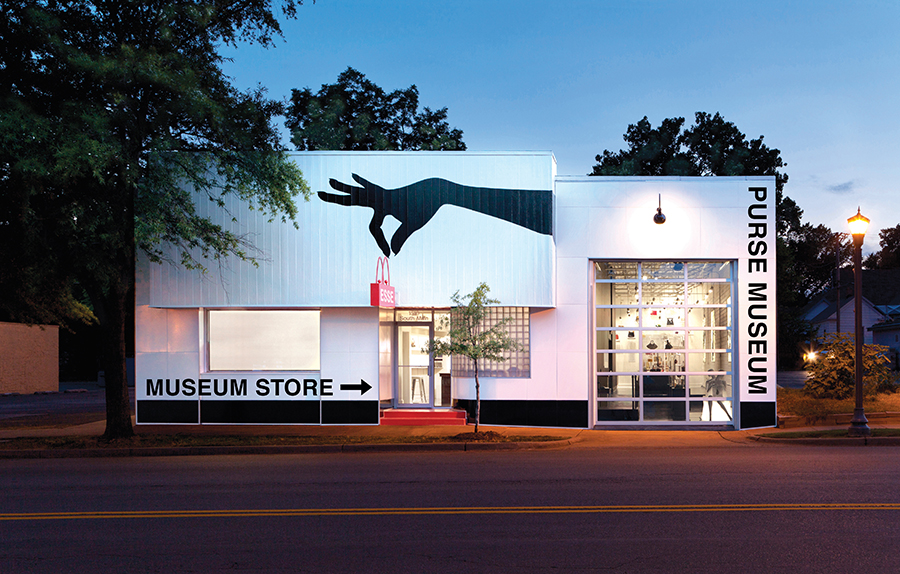 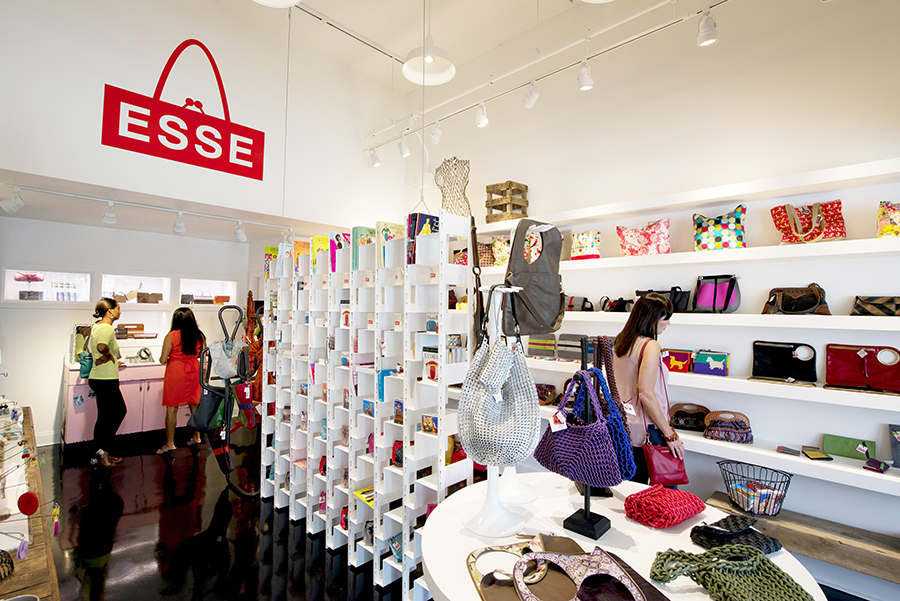 Our central Arkansas option is unique to North America: the ESSE Purse Museum in downtown Little Rock (only two other purse museums exist in the world; one in Seoul and the other in Amsterdam). Established by Anita Davis in 2013, the museum is much, much more than a collection of handbags. In fact, it’s nothing short of a testament to the evolving role of women in American society over the past century. On my visits, I’ve been absolutely amazed by how the contents of purses have changed over the years. You’ll see a voter’s registration card dating from the time women finally were allowed to cast their ballots, a flask from the Prohibition era and ration cards from World War II. I’ve visited more museums than I care to admit, but I have never seen better interpretative displays than those you’ll find at ESSE.
Its remarkable collection has caught the attention of the national media, having been covered by the likes of Southern Living, Garden & Gun, USA Today and National Geographic.
The ESSE Purse Museum is housed at 1500 Main Street in Little Rock’s SoMa (South Main) District. It’s open Tuesday through Saturday from 11 a.m. to 4 p.m. and from 11 a.m. through 3 p.m. on Sundays. Admission is $10 for adults ($8 for seniors and military), $8 for students and free for those under 6. In addition to top-notch exhibits, the museum features a nicely stocked gift shop. Men, by the way, are quite welcome! Additional information is available at essepursemuseum.com. 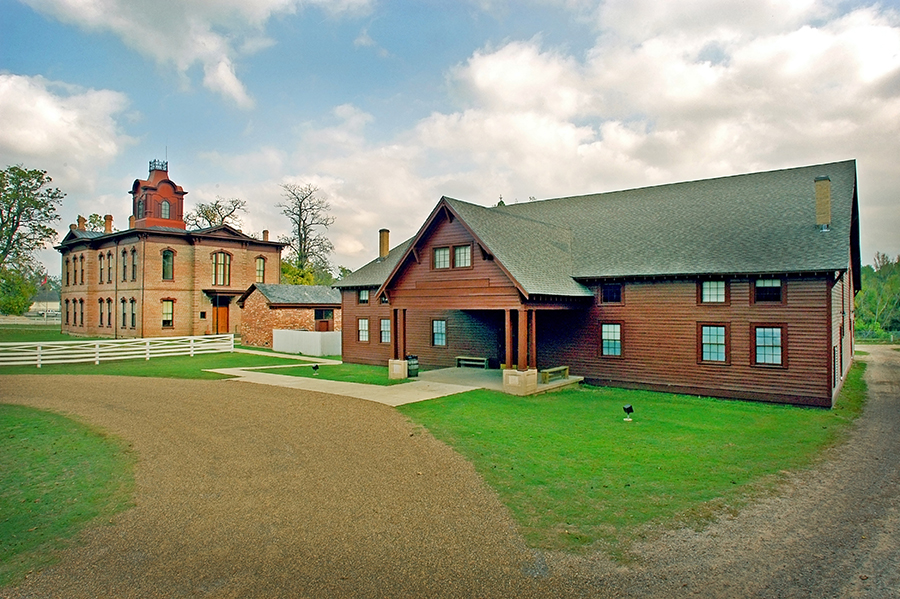 Historic Washington State Park, situated just outside Hope and off Interstate 30, is our southwest Arkansas treasure. The park is known for an outstanding collection of more than 30 beautifully restored landmarks and historic structures, including classic examples of Southern Greek Revival, Italianate, Gothic Revival and Federal architecture. Tour the buildings, visit with the friendly guides in period costumes and enjoy the antique furnishings. For a special time in this delightful 19th century community, consider taking a surrey ride. It’s no wonder the entire park is listed on the National Register of Historic Places.
Located on the historic Southwest Trail and founded on George Washington’s birthday in 1824, the town has hosted many dignitaries over the years. Among them was Jim Bowie, who bought his legendary knife from James Black, a local blacksmith, who forged the legendary Bowie knife at his shop in Washington. The park’s Weapons Museum has more than 600 flintlocks, muskets, rifles, shotguns, revolvers and knives in its collection.
Another historic figure with ties to Washington was Sam Houston. Holed up in a small room in the local tavern in 1834, Houston spent months meeting secretly with anonymous men and plotting the liberation of Texas. Because of this, a good argument can be made that Washington is the “Birthplace of the Texas Revolution.” Davy Crockett, another American hero, stopped in Washington on the way to Texas, where he died shortly thereafter at the Alamo.
The visitor center at Historic Washington State Park is open daily from 8 a.m. to 5 p.m. Full tours of the park cost $9 for adults and $5 for children (6 through 12). Sampler tours are $6 for adults and $3 for kids. Surrey rides cost $8 for adults and $4 for children. The Williams Tavern Restaurant (circa 1832) is open daily from 11 a.m. to 3 p.m. (closed on New Year’s Day, Thanksgiving and Christmas Day). Visit historicwashingtonstatepark.com for more information. 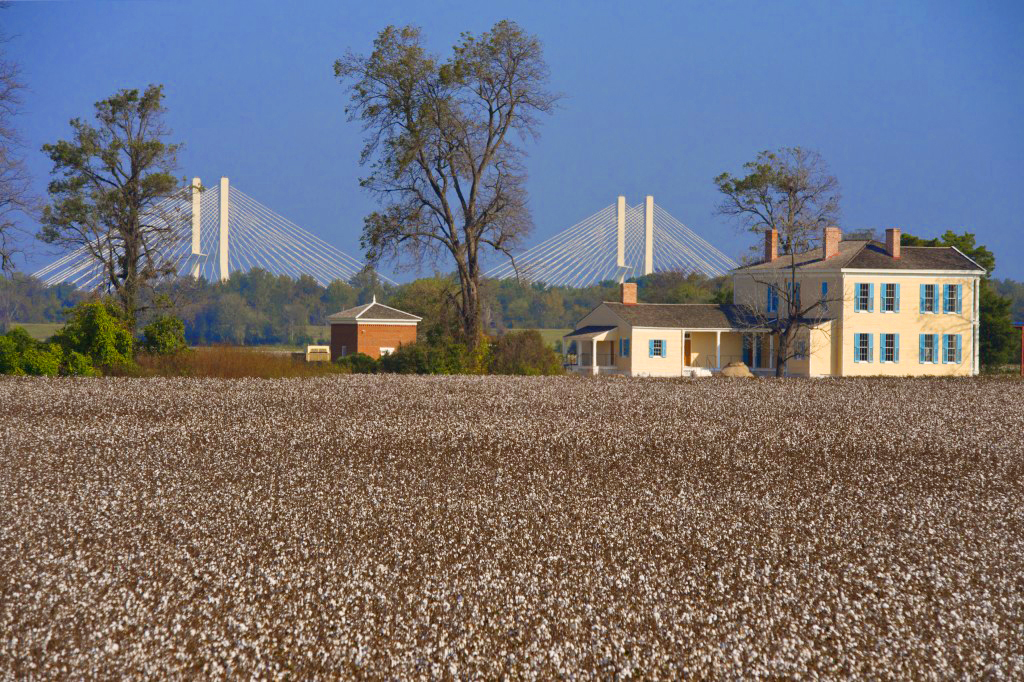 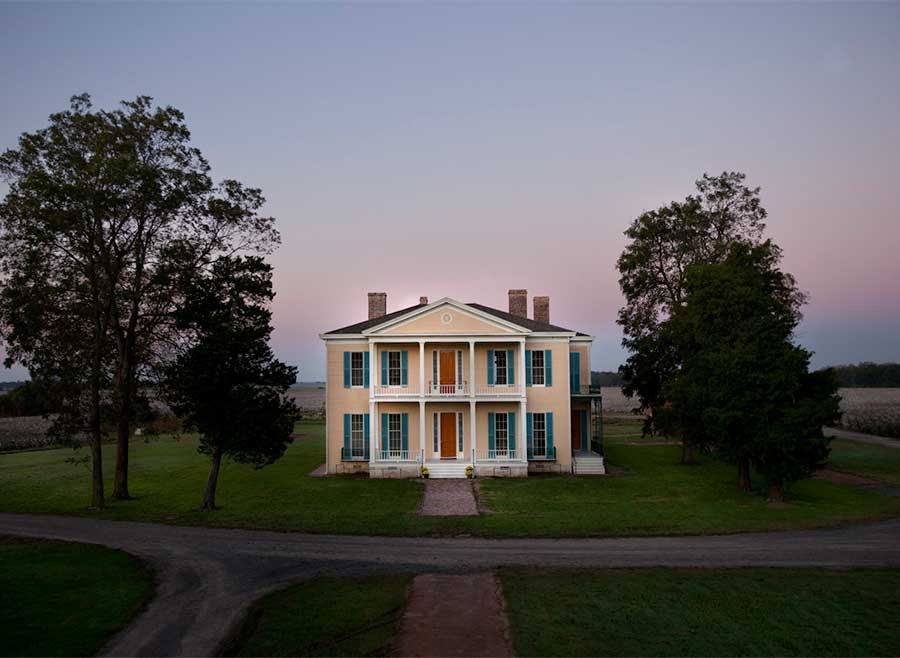 The final stop – our southeast Arkansas destination – on this five-part tour is Lakeport Plantation, one of the state’s premier historic buildings. Standing tall and facing the Mississippi River levee a few miles south of Lake Village, this 8,000-square-foot Greek Revival mansion dates from 1859. Built by slaves using local cypress timber, the 17-room, two-story home is now open to the public year-round following a five-year restoration project by Arkansas State University. The award-winning exhibits document an important era of the state’s past.
Monday through Friday tours begin on the hour from 9 a.m. through 3 p.m. New this summer are Saturday tours from 11 a.m. to 2 p.m. (May 26 through July 28; closed Memorial Day and Independence Day). Admission is $5 per person and $3 for seniors and school-age visitors. Visit lakeport.astate.edu for additional information.
Wildlife enthusiasts heading to Lakeport Plantation will enjoy nearby Lake Chicot, North America’s largest oxbow lake and one of the top birding sites in the South. And inveterate shoppers will be hard-pressed to leave the Paul Michael emporium in Lake Village.
Next month, tour Arkansas with five more lesser-known attractions!