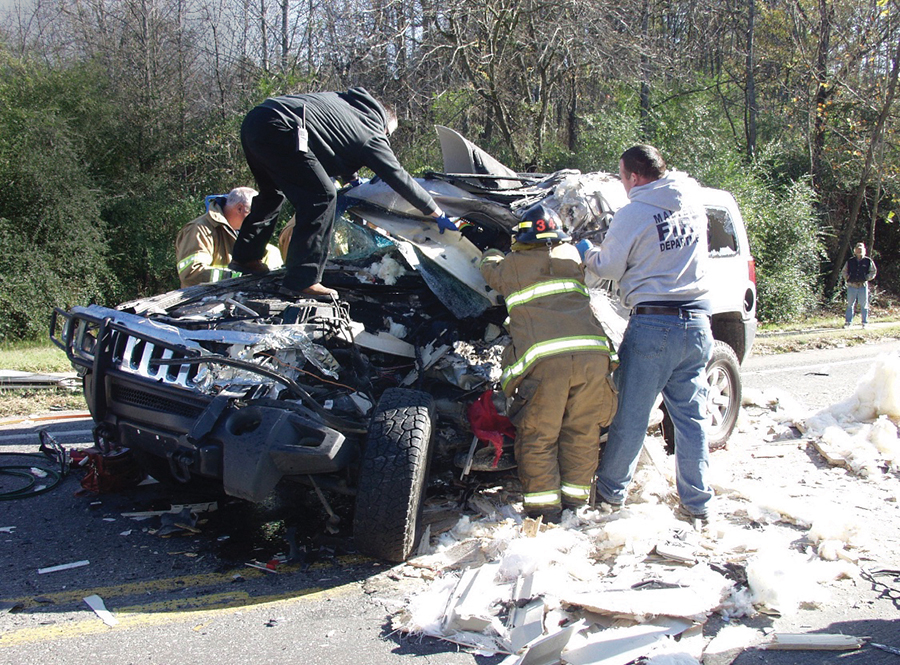 In the blink of an eye, Amy Gray’s life changed when her car struck the side of a manufactured home. Photos courtesy of Gray.

It only takes a moment for someone’s life to be turned upside down.

For Amy Kizziar Gray, that moment came in November 2011.

A physical therapist in her hometown of Malvern, Gray was driving to see a patient early one morning when she struck a mobile home being transported by a tractor trailer. The structure exploded on impact, sending the corner beam of the home through her vehicle, impaling her through the pelvis.

First responders worked for nearly two hours to remove Gray from her vehicle. When she was freed, Gray was flown by helicopter from the Malvern High School football field directly to UAMS. It’s the only hospital in the state capable of handling her level of trauma. It took a team of doctors, led by Dr. Ron Robertson, all night to stabilize her, and she lost nearly 120 units of blood within the first 13 hours.

Gray’s life was saved, she says, because of Robertson’s determination and some divine intervention.

“He had just lost his nephew,” Gray says. “He tried to save him, but was unable to, just days before my accident. When he got the call from the trauma center about me, the first thing he asked was if I had a brain injury. When they said no, he said: ‘I’m saving this one. This one will not die.’ So, he buckled down and did everything within his power and directed everyone else meticulously to save my life. God intervened at the same time, and I’m still here.”

Gray’s road to recovery was a long one, with plenty of hills and valleys along the way. “I always have had a really positive outlook on life,” she says. “But, you can’t go through something like this and it not change you. As positive and upbeat as I was prior to my accident, I felt like I had hit my stumbling block, a huge hurdle. There were times I didn’t know if I’d get over it.”

Since her accident, Gray has regained her joy in life, traveling the world and finding the love of her life. She never gave up.

But get over it she did. After spending months in the hospital, Gray moved in with her grandmother, whose home was handicap accessible. As she began to regain more mobility, Gray moved in with her parents. And eventually, she was able to once again live independently, having fully regained her ability to walk. In 2016, she was even cleared to go back to work.

There were plenty of challenges along the way, she says. To date, Gray has had upwards of 140 surgeries to correct a number of issues stemming from the accident. She is scheduled for another surgery on her wrist in the coming weeks. “I’ve always sought God’s will for my life,” Gray says. “I might not always be where I want to be, but I’m where God wants me to be. So, I’m okay with that.”

While others may look at such a traumatic injury and assume only loss, Gray says she has gained much from her experience, including a happy marriage. “I know I would have never got married, or even met him, had the accident not happened. I was always blowing and going, and I wouldn’t have slowed down enough to get married. That’s one good outcome,” she says with a laugh.

Gray knows her road to recovery isn’t completely run. But she’s alive and well, and Gray finds joy in knowing she can overcome whatever comes her way.

“I really have to give all the credit to God,” Gray says. “If it wasn’t for his grace, I wouldn’t be alive, much less well. I consider, where I come from, to be well. I hope he gets some glory out of all that I’ve been through. If so, I guess it was all worth it.” 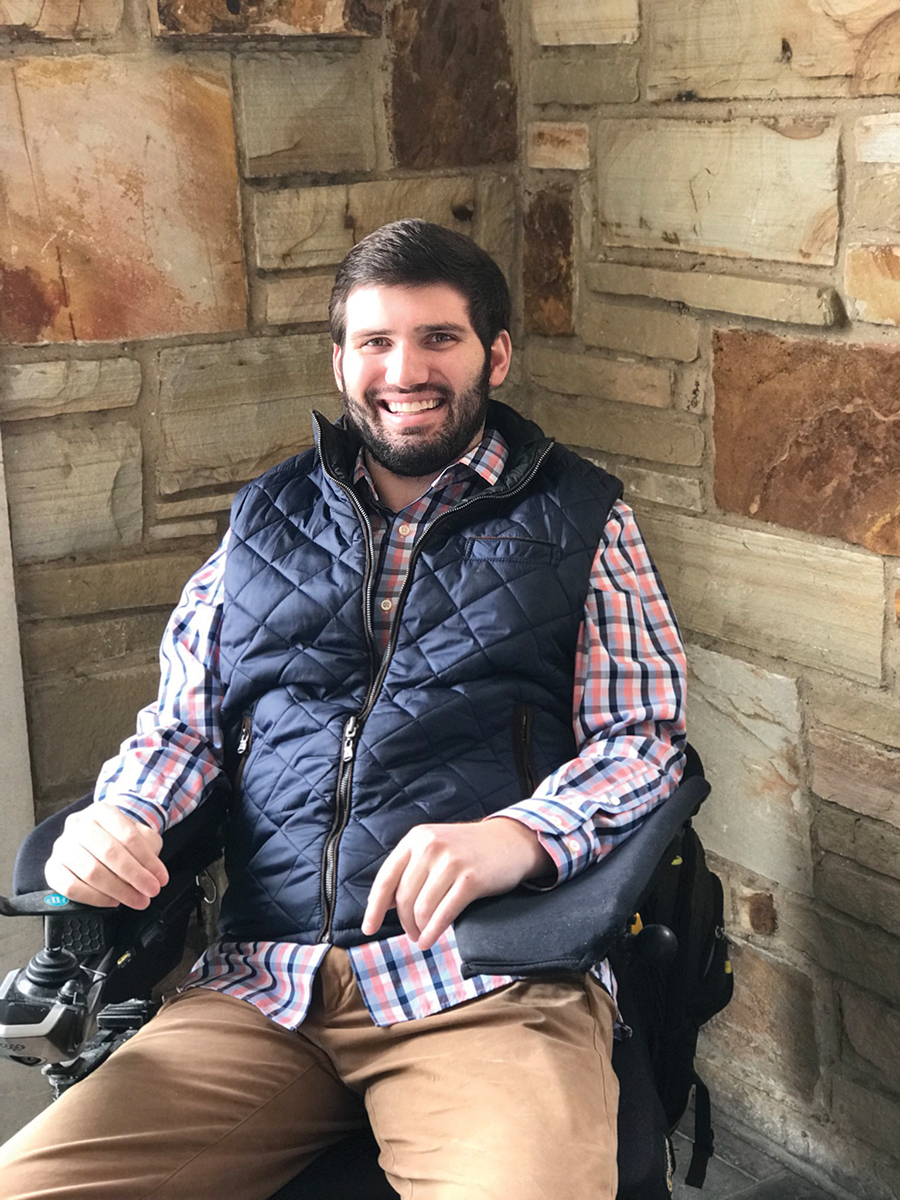 Will Jirik never meets a stranger. The soon-to-be college graduate is an inspiration to all those around him.

Will Jirik’s life changed forever in July 2013. He was home in Cabot for summer break, following his first year of college at Rhodes in Memphis, when he was severely injured in an automobile accident, suffering fractures to his C-1, 2 and 5 vertebrae. He was taken to Baptist Health, where he was treated by a team of doctors led by Dr. Timothy Burson.

The injury left Jirik confined to a wheelchair. He would spend eight months at Shepherd Center, a spinal cord rehabilitation facility in Atlanta. There, he determined not to let his circumstances sideline him. “Throughout that time, one of my biggest goals was to go back to college and become a contributing member of society,” Jirik says.

And Jirik accomplished that goal, returning to college the following year. But though he was back in his element, he found a new set of challenges awaiting him.

But he managed, Jirik says, by relying on the kindness of others. “Fortunately, one of my strongest attributes is that I never meet a stranger,” he says. “I’ve never been scared to ask someone for help, whether it’s opening a door or zipping up my jacket.”

It wasn’t long before Jirik wanted to do more than just his day-to-day routine. Before his injury, he was elected by his peers to student government. His academic hiatus kept him from serving. So, when given the opportunity, Jirik ran for Rhodes’ Social Regulations Council – the student body that ensures peers uphold the Rhodes honor code. He won.

The next year, he campaigned to become a Rhodes student trustee. He won that position, too. So, he set his sights even higher.

“After having successfully figured out campus life, I set out to find a job,” Jirik says. “I knew this would be the most challenging. It was a completely different dynamic. At Shepherd, I had my family support system. At college, had friends. With a job, I was going in with cold feet. It was daunting, not knowing anyone there.”

Jirik applied for several internships and landed one in the internal audit department of AutoZone in downtown Memphis. He loved it, and he’ll return this month to continue his internship. “I came to find out that my fear was completely misplaced,” he says.

This spring, Jirik will graduate from Rhodes with degrees in economics and commerce in business. He’ll return to Rhodes in the fall to earn his master’s in accounting. After that? The sky’s the limit. He knows he can do anything he puts his mind to. 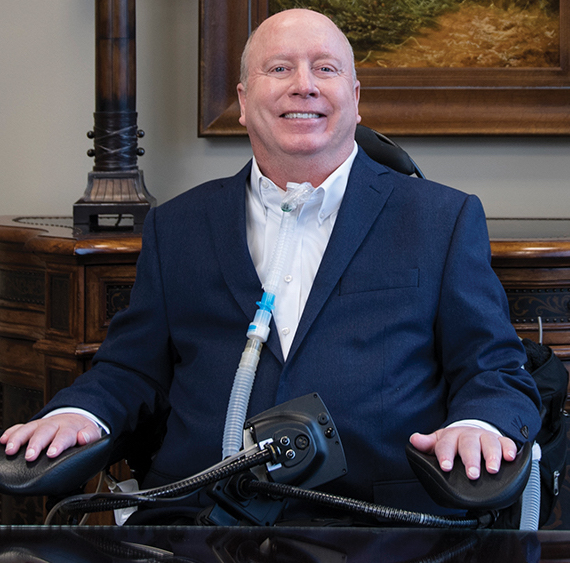 Tommy Van Zandt didn’t let his injury defeat him. Today, he’s reaching out to those in need, looking to help others whose lives have been turned upside down.

Tommy Van Zandt’s life changed in an instant in February of 2009. The co-founder of commercial real estate giant Sage Partners, Van Zandt was cutting limbs in his yard outside his Fayetteville home following an intense ice storm when he was knocked off his ladder by a swinging tree branch.

He fell 12 to 14 feet to the ground, and Van Zandt knew immediately his neck had been broken. “There was an incredible sense of calm,” he says. “I knew my neck was broken, and then I realized I was paralyzed.”

And it didn’t take long for the paralysis to affect his breathing, as his diaphragm began to shut down. As his breathing became more and more strained, he prayed that he might see his family again. “I just prayed very hard that I could see Robyn and the boys again,” Van Zandt says. “I thought: if it’s my time, I’m okay with that. But I wanted to see them one last time.”

As he prayed, his wife, Robyn, saw him through a window in their home and came running. Van Zandt was rushed to Washington Regional Medical Center in Fayetteville, where he underwent surgery to fuse his fractured vertebra. Doctors told him that he would not have survived had he not been in good shape with strong, healthy lungs.

The injury left Van Zandt completely paralyzed from the base of his neck down. After coming to terms with his condition, he knew he had a decision to make.

“You really do have to look inward and decide whether you want to fight this and stay positive, do everything I can to stay productive and relevant, or will I just sink into a shell and go the wrong direction,” Van Zandt says. “I was born and raised with a sense of energy and positive thinking. I chose to fight this, to do what I can with it.”

With the help of God and family, Van Zandt got into Craig Hospital, a world-renowned spinal cord rehabilitation center in Colorado. With time and prayer, he realized that God had saved him for a purpose, and he found that purpose through interactions with others. His injury slowed him down, but it wasn’t going to stop him.

“I was always a doer, whether it was business-related, family-related or parent-related. I probably had ADD before they knew what it was,” he jokes. “I moved fast. I’ve been in commercial real estate for 33 years, and I always have enjoyed people. This injury slowed me down. I couldn’t go from meeting to meeting to meeting. God gave me the ability to slow down and really focus on the people I was dealing with, not necessarily just the transaction.”

“I really think God’s purpose for me is to be able to really focus on the people around me, and the people I come in contact with, whether I know them or not,” Van Zandt adds. “God put us here to love one another, and there’s not a lot of that going on. A lot of people don’t get a pat on the back. To get a few positive words from someone might make all the difference in their day. And that’s what I try to do. I’m still going to work and doing business, but my perspective has changed.”

Van Zandt and his family are also taking what they’ve learned through their experience and using it to help others. Last month, his brother-in-law and business partner Mark Saviers released a book, Flipped, which details the family’s journey from tragedy to triumph. A website was also launched, FlippedStory.com, providing resources and stories of hope and encouragement for anyone else whose lives may have been flipped upside down.

Van Zandt hopes their efforts can help others like him and his family. “Whomever your close friends and family may be, their life gets flipped probably twice as much as the injured. They have to change their whole lifestyle, their whole perspective. It was very difficult on my wife and two sons. We are on level ground now, but the story continues,” he says.

“I can’t express enough how much faith, family and friends have meant to me,” says Van Zandt. “Bottom line, it’s how you survive a tragic situation.”