Travel Arkansas: Boom … With a Twist

Skydivers, pie-eating contests, a pig roast and old-timey music add an extra spark to Independence Day festivities around the state.

Photography by Jerry Wilcoxen and courtesy of ASUMH

[dropcap]If[/dropcap] you’re not sure where to go to see fireworks this Independence Day, here’s a tip: just head toward the nearest major body of water and wait until dark.

Not every fireworks display planned for the Independence Day weekend will take place on the shores of a lake or river, but a healthy majority will, and for good reason: the Fourth of July in Arkansas is nothing if not hot, so as long as there’s no lightning in the sky, water seems to be the most sensible place to while away the long hours before the midsummer sun finally sets.

The Fourth falls on a Monday this year. The three-day weekend means you could catch as many as four different “boomathons” this year: in Hot Springs on July 1 at Oaklawn Park or on July 2 on Lake Hamilton; also on the 2nd, on Greers Ferry Lake in Heber Springs; July 3 at Lake Norfork or Fairfield Bay; and July 4 at DeGray Lake Resort State Park, Mountain View, Siloam Springs, Beaver Lake, Cherokee Village, Mena, and, of course, Little Rock’s annual Pops on the River extravaganza with the Arkansas Symphony Orchestra. If you’re in Springdale, you can see fireworks all four nights from the same place: Arvest Ballpark, which is holding a “Great American Blast” event with a different theme each night and fireworks after each of the Northwest Arkansas Naturals’ games against the Midland RockHounds and the Frisco RoughRiders.

With so many possibilities, here are a few that offer something a little bit different as part of their Independence Day festivities.

Fireworks won’t be the only things in the sky on the Fourth of July in Siloam Springs. The city’s annual Fire in the Sky event, held at the Siloam Springs Municipal Airport, also features parachutists descending on the festivities. 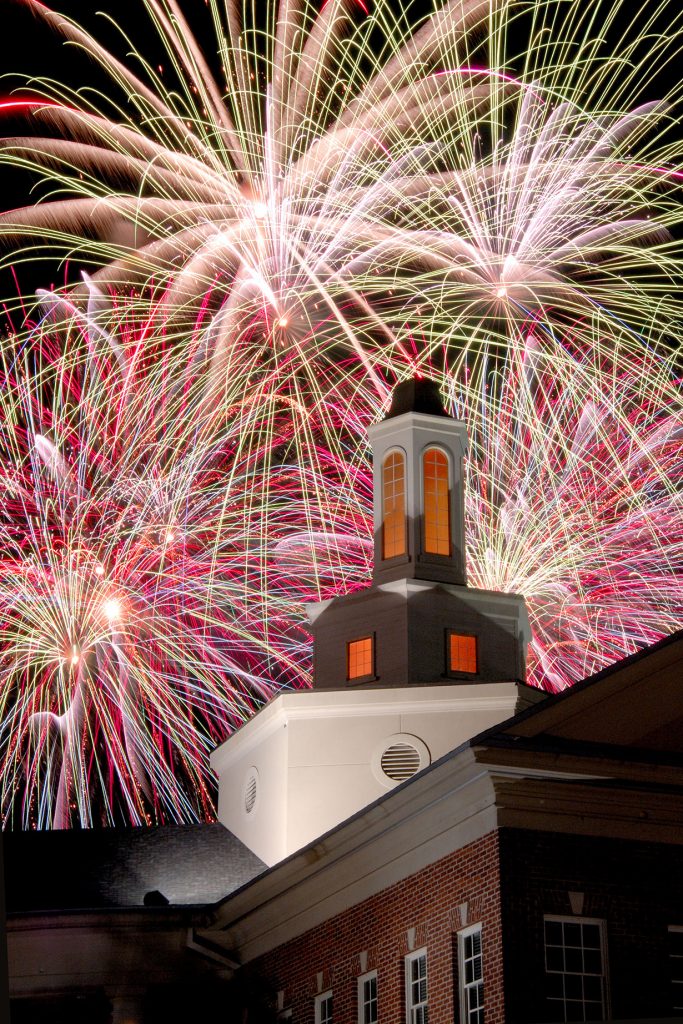 “They jump out right before the fireworks start, at dusk,” said Holland Hayden, communications director for the city of Siloam Springs. “People just love it.”

The event always draws a good crowd, Hayden said, but the airport is easy to get in and out of, so logistics aren’t a problem. Doors — well, the parking lot — opens at 6 p.m., and the fireworks begin at 9:15 p.m. For more information, log on to siloamsprings.com.

DeGray Lake State Park’s July Fourth Island Festival includes a whole host of programs and activities. Kayak races and a 5K fun run will help you prepare for the watermelon-eating contest and other good food. The festival takes place on the Lodge Island in the park, and once the sun sets, you’ll have a great view of the fireworks display over the lake. For more information, call 501.865.5810.

There’s no lake near the Mena Elks Lodge’s fifth annual Pig Roast and Fireworks Show, but the full slate of activities planned for the event does include a waterslide, along with snow cones, kids’ games, pie-and hot dog-eating contests, and, of course, fireworks. The event is set for 5 to 11:45 p.m. July 4 at 124 Elks Lane in Mena. For more information, call 479.394.9919.

If you like to mix a little time travel in with your Independence Day celebrations, you’ve got a few options this year.

Almost nothing happens in Mountain View without a soundtrack of traditional Ozarks music, and Independence Day weekend is no exception. The “old time gathering” at the fairgrounds and the town square will go on the entire weekend, with fireworks at the fairgrounds July 4; call 870.269.8068 for more information.

Finally, if you’re planning to spend Independence Day in Little Rock, you can visit the Historic Arkansas Museum to see how the holiday was celebrated on the Arkansas frontier. There’ll be an old-fashioned patriotic parade, music from the 19th century, a reading of the Declaration of Independence, and museum interpreters in period character. The event is scheduled from 2 to 4 p.m. July 4 at the museum, 200 E. Third St. in Little Rock. It’s the perfect event to enjoy before Pops on the River, where the fun kicks off at noon with a variety of children’s activities, a classic car show, shopping, food trucks and other entertainment followed by a performance by the Arkansas Symphony later in the evening. For more information, log on to historicarkansas.org and pops.arkansasonline.com.

Fireworks will explode across Arkansas’ skies throughout Independence Day weekend. Here’s a look at other displays scheduled around the state.

[dropcap]Down[/dropcap] at Historic Washington State Park near Hope, they’re not planning to shoot off fireworks, but the park’s interpreters will reenact of the reading and signing of the Declaration of Independence several times over the holiday weekend. The events are scheduled for 10:30 a.m., 1:30 and 3:30 p.m. July 2 and July 4. For more information, check the park’s website historicwashingtonstatepark.com.

Spa Blast at Oaklawn Park is a family-friendly event that includes a free concert and a fireworks show. The fun kicks off at 4 p.m. in Oaklawn’s infield area at 2705 Central Ave. in Hot Springs. For more information, call 501.623.4411 ext. 497.

Hot Springs/Lake Hamilton: At dusk, fireworks will be launched from near 4800 Central Ave., across from the Clarion Resort on the Lake.

Heber Springs Fireworks Extravaganza: This event on the shores of Sandy Beach starts with live music at 7 p.m. The fireworks, which follow at 9:30 p.m., will be choreographed to music broadcast on radio station KFFB, 106.1 FM.

Celebrate “Independence Eve” on Lake Norfork with a fireworks display shot from the twin bridges area of the lake. You can watch from your car, boat or campsite, and listen to accompanying music on radio station 99.7 FM, the Boot.

Ventris Trail’s End Resort, Beaver Lake: This annual firework show is designed to be watched from a boat – it’s projected toward the lake to maximize the light reflected by the water. Look for the banners just south of marker 8 on Beaver Lake. More information can be found at the website beaverlakeresorts.com.

Mountain Harbor Resort, Lake Ouachita: Festivities kick off at 9 a.m. with a patriotic parade that winds through the resort at 994 Mountain Harbor Road in Mount Ida. Fireworks over Lake Ouachita begin at 9:30 p.m. For more information, log on to mountainharborresort.com.

Lake Thunderbird, Cherokee Village: A helicopter air show kicks things off at 8 p.m., followed by a fireworks display at 9 p.m.