Travel Arkansas: Music for the Masses

Arkansas’ music festivals draw crowds while the weather’s warm and spirits are high.

Photographs courtesy of the venues

[dropcap]Good[/dropcap] weather means good music in Arkansas. The arrival of spring kicks off a procession of music festivals across the state that stretches well into the fall, a bounty that includes something for everyone, from sit-down classical performances to outdoor mosh-pit jam bands to laid-back blues in the park.

The state’s largest and best-known festival, of course, is Riverfest (photo at top) the three-day music and arts extravaganza along the downtown Little Rock riverfront and the Clinton Presidential Center grounds in Little Rock on Memorial Day weekend.

Riverfest consistently draws some of the biggest names in a variety of musical genres, and the 2015 lineup does not disappoint. Sheryl Crow, Bone Thugs-n-Harmony, Robert Earl Keen, past American Idol winner Kris Allen, Kip Moore and Sister Hazel are among this year’s headliners. A host of other regional and up-and-coming acts will fill out the event’s music stages. Check the festival website, riverfestarkansas.com, for more details.

Tickets to Riverfest, May 22 to 24 this year, are $40 at the gate for a three-day pass. Advance passes are available for $20 through the Riverfest website. 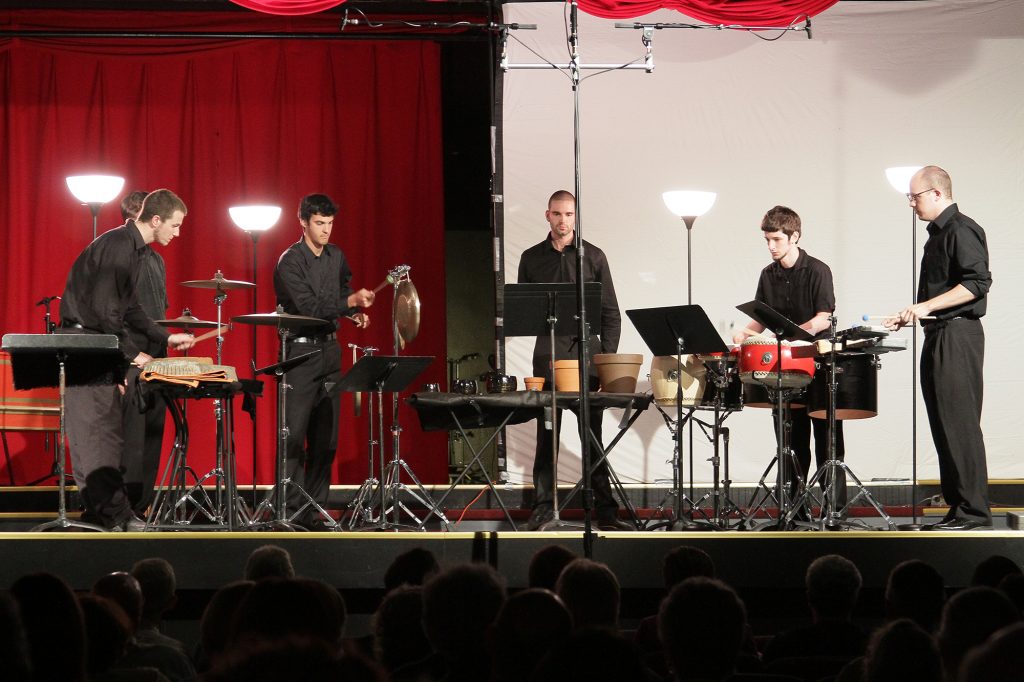 The Hot Springs Music Festival is unlike any other in the state, both because it focuses exclusively on classical music and because it brings in more than 100 accomplished pre-professional musicians to work with about 20 seasoned professional mentors drawn from college faculties across the country. It also combines more than 20 formal performances in concert venues with about 250 informal, open rehearsals in public spaces such as art galleries, where anyone strolling through downtown Hot Springs can get an earful for free.

The festival will kick off with a performance on the steps of the Arlington Hotel on May 31, the same day the musicians have their first rehearsal. Rehearsals and performances continue through June 13 in venues around Hot Springs, including the Oaklawn Visual and Performing Arts Magnet School. One concert will be a progressive performance, with the musicians and audience moving along Bathhouse Row.

Ticket prices for individual concerts usually top out at $20, said Suzanne Davidson, the festival’s executive director. “Part of our mission is to make it affordable, so anyone can go hear classical music,” she said.

This year’s orchestral performances will include Stravinsky’s “Firebird Suite,” Haydn’s “Symphony No. 102” and Debussy’s “Prelude to the Afternoon of a Faun.” For the full schedule and ticket information, go to hotmusic.org. 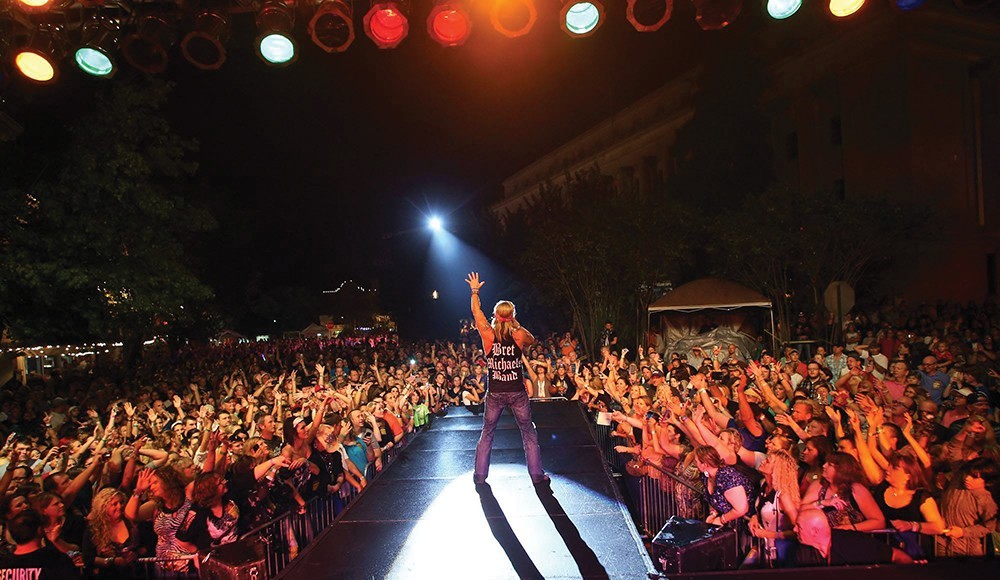 The 28-year-old MusicFest El Dorado is gearing up for what may be its final year at its long-time home on the streets of downtown El Dorado. A new entertainment complex is being built downtown with a tentative completion date of September 2016, and the festival will move there when it’s available.

Meanwhile, Mark Givens, executive director of Main Street El Dorado, is putting together the lineup for this fall’s festival, set for Oct. 2 and 3, and hopes to announce a headliner by mid-May.

“We really want to blow it out as big as possible,” he said.

MusicFest El Dorado typically showcases a diverse range of artists. Givens said he looks for acts with crossover appeal and bands whose names and music will mean something to the 35-to-55 age group that typically has the free time and money to attend a weekend music festival.

“Our biggest [attendance] to date was in 2011, which was MC Hammer, Vanilla Ice and Brett Michaels,” he said. Boyz II Men and Justin Moore have also played MusicFest El Dorado in recent years.

For updates on the 2015 lineup and ticket information, check the festival website, musicfesteldorado.com.

Mulberry Mountain has become a major festival destination over the past decade. Located on 650 acres off state Highway 23, the Pig Trail Scenic Byway, the “lodging and event resort” is best known as the site of Wakarusa, a four-day festival that’s now in its seventh year.

“It really is one of the top two or three festival sites in America,” Brett Mosiman, Wakarusa’s director said. “It’s incredibly beautiful, with ponds and fishing and hiking and biking. It really is on top of a mountain, so there are waterfalls, and the Mulberry River is a Class 2 to 3 float stream. It’s a destination vacation.”

About 20,000 people attend the event each day, which this year runs June 4 through 7, and many camp out in tents or RVs at the festival site. There’s also a hotel package available, as well as a VIP experience that includes meals, early arrival, camping in a private gated area next to the main stage, access to showers and front-row viewing.

“That’s the Cadillac way to enjoy our festivals,” Mosiman said.

George’s Majestic Lounge, the Fayetteville Public Library and the Fayette 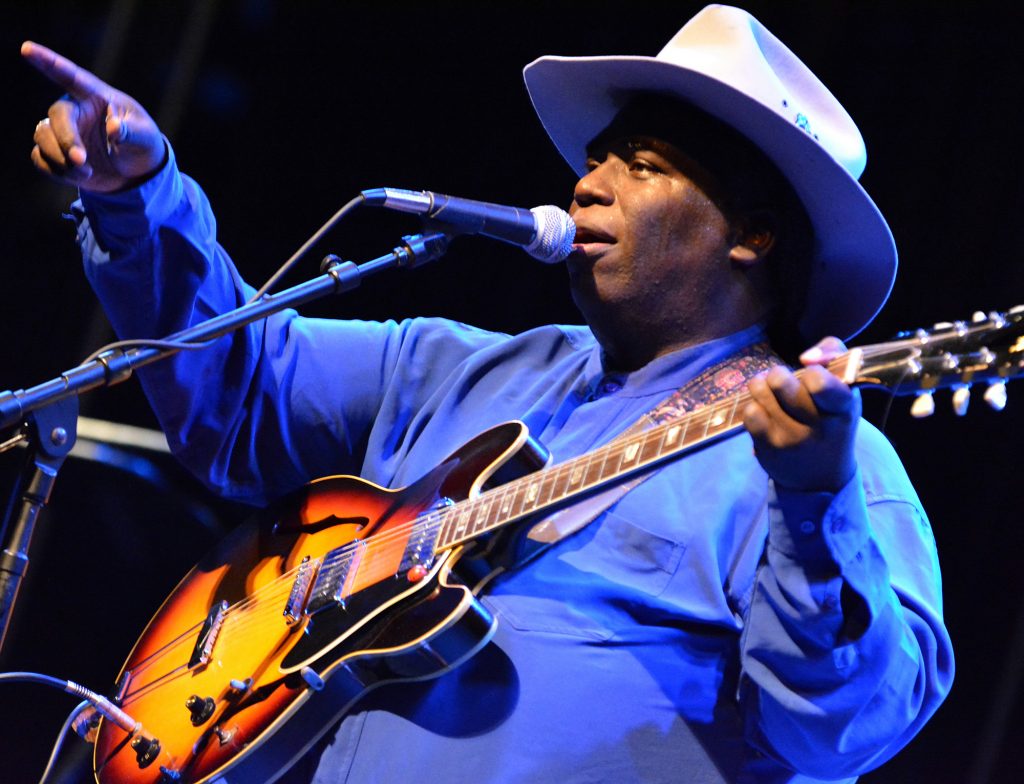 “A who’s who of the blues” is what you’ll find at the Eureka Springs Blues Weekend, according to its producer, Charles Ragsdell.

“We’re not one of the festivals that goes commercial as far as trying to bring in non-blues bands to get an audience,” he said. “Instead, we really try to stay very close to the roots of the blues.”

That doesn’t mean every band sounds the same, Ragsdell said. There’s a broad range, from harmonica-oriented to guitar-oriented to acoustic to bands with full horn sections.

The name of this festival is no longer quite accurate: This year’s version will stretch out over an entire week, with performances in Basin Spring Park and other locations around town bookending several days of workshops. The event closes with a blues picnic on Father’s Day at Turpentine Creek Wildlife Refuge, which is also the festival’s beneficiary.

The 2015 festival runs June 13 through 21, and headliners include the Bel-Airs, Earl & Them, Kelley Hunt, Jimmy D. Lane and the Nace Brothers. Individual show tickets and festival passes are available at eurekaspringsblues.com.

Need more blues in June? Head over to Fort Smith for the Riverfront Blues Festival, set for June 26 and 27 at Harry E. Kelley Park. Performers this year include the Chris Cameron Band, Hadden Sayers, the Eric Matthews Band, Jimmy Thackery and Larry McCray. Tickets are $10 per day. 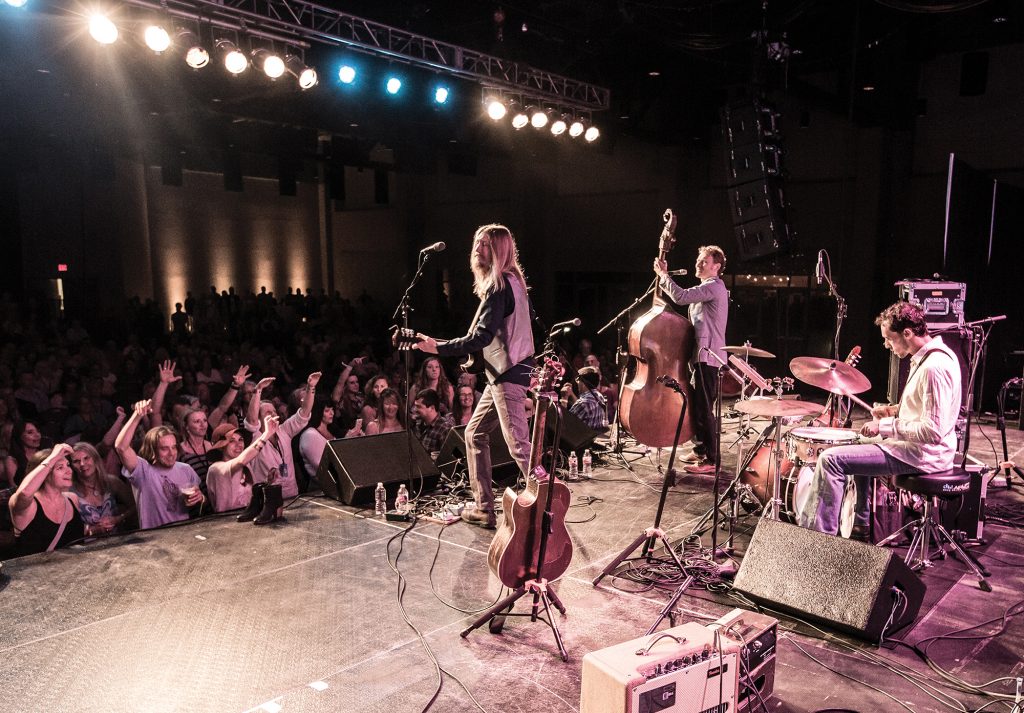 The Wood Brothers played at 2014’s Fayetteville Roots Festival, which is scheduled this year for Aug. 27 through 30.

Thunder on the Mountain

If Mulberry Mountain sounds perfect, but Wakarusa isn’t necessarily your style, the Thunder on the Mountain Music and Camping Festival just might be. This festival, now in its second year, features a weekend of country music. Headliners for the June 26 through 28 event are Carrie Underwood, the Zac Brown Band and the Band Perry, along with several dozen other acts that will perform on four stages over the course of the weekend. Single-day passes start at $79, and weekend passes start at $129. Camping, parking and reserved seating are extra. 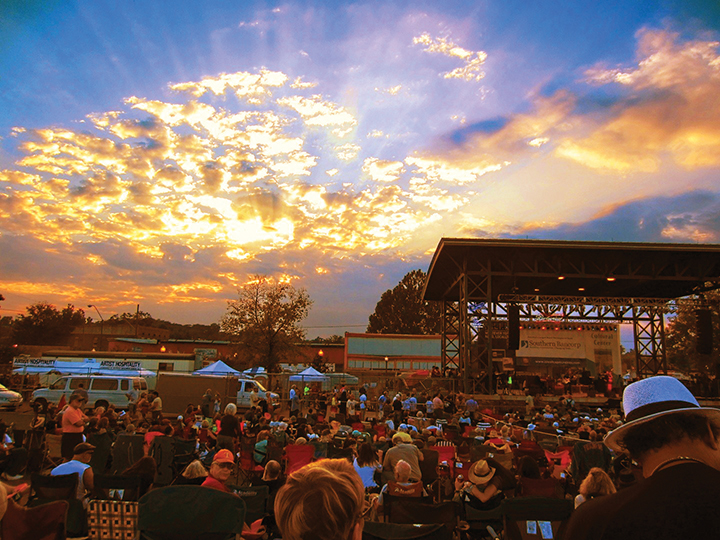 Perhaps the Arkansas festival known by more people around the world than any other, the King Biscuit Blues Festival draws massive crowds to the streets of downtown Helena each October to hear some of the biggest names in blues music. Headliners for the 2015 festival, scheduled for Oct. 7 to 10, have not yet been announced, but information on the lineup, schedule and tickets are available at kingbiscuitfestival.com.