Arkansas’ backroads are a biker’s dream

Top photo: Bikes, Blues & BBQ in Fayetteville, has raised more than 1.3 million for local charities since 2000. / Photo courtesy of Arkansas Department of Parks and Tourism

[dropcap]You[/dropcap] may not know it if you stick to four-wheeled transportation, but Arkansas is one of the most popular destinations for motorcyclists between the Smokies and the Rockies. It’s easy to understand why. If the journey itself is the destination – in other words, if you’re not in any big hurry you’d be hard pressed to find a more fun set of roads to ride on than those that run through Arkansas’ close-fitting mountains.

“It’s just a spider web of wonderful roads that lead all over,” said David Bell, a motorcycle enthusiast and photographer who lives near Berryville and runs the website cruisetheozarks.com, which includes maps of a number of the state’s best motorcycle routes as well as information about motorcycle-related events around Arkansas. “When you take the Ouachitas and Ozarks altogether, you have the mid-America riding destination.”

Arkansas rolls out the welcome mat for motorcyclists and scooter riders in the fall. Rallies in Eureka Springs, Fayetteville, Hot Springs and Harrison draw thousands upon thousands of riders. Bell talked about his favorite routes to get to each of those places, along with some other choice stretches of highway around the state.

The annual Bikes, Blues and BBQ rally, one of the largest in the United States, is set for Sept. 21-24 this year. Coming from Central Arkansas, the Pig Trail – Highway 23 from Clarksville north to the junction with Highway 16 – is a longstanding favorite of both motorcyclists and car drivers. Bell also likes riding on Highway 16 between Clinton and Elkins, another possible route to Fayetteville from points south and east.

“If you look at 16 on a map, it goes up and down and twists around,” Bell said. “It’s not highly traveled because it doesn’t really go anywhere. It’s more fun but a lot slower. It’s a really underappreciated highway.”

And if you’re coming from the southwest, Highway 71 – the Boston Mountain Scenic Byway, once the main route from I-40 to northwest Arkansas – is a wonderful ride now that most traffic takes the nearby Interstate 540, Bell said.

“The footprint is wide,” he said. “There’s lots of room within your lane to drift around and carve some corners. It’s really fun.” 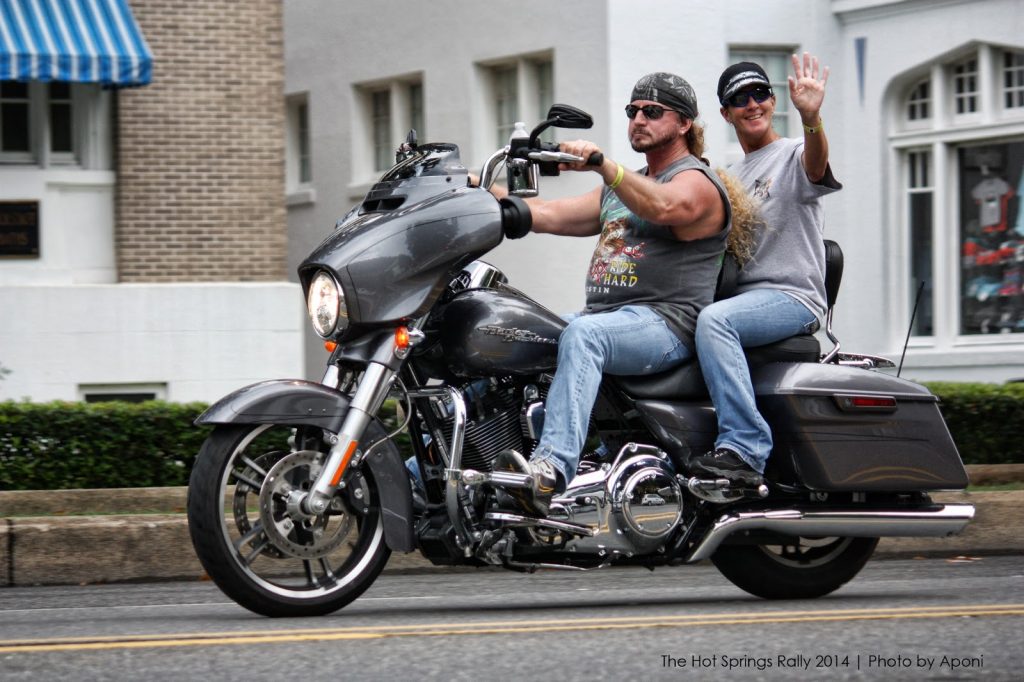 The Hot Springs Rally, set for Sept. 8-10, includes a full weekend of concerts and rides around the scenic, if less dramatic, Ouachita Mountains. The roads in this area of Arkansas feature more gentle curves than in the Ozarks, Bell said, making them a favorite of “cruisers” – riders more interested in enjoying the view than in seeing how fast they can take a switchback corner. Highway 7 is a favorite route to and from Hot Springs, Bell said. Riders coming from the northwest might take the Pig Trail route (Highway 23) to Highway 309 just south of Interstate 40. From there, take 309 up and over Mount Magazine – one of Bell’s favorite stretches of road in the state – then head east on Highway 10 to hook up with Highway 7 south into Hot Springs. 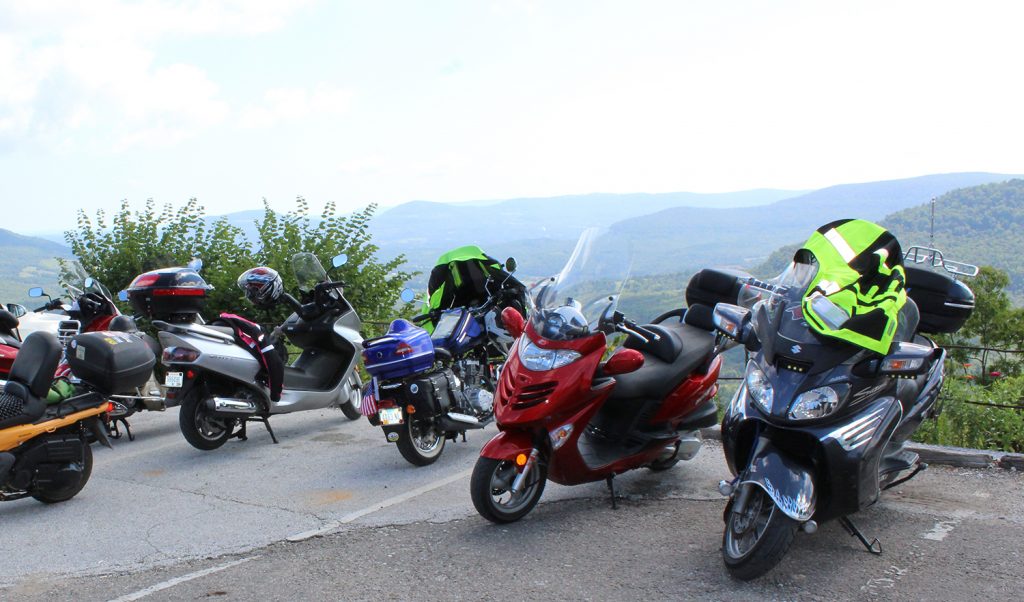 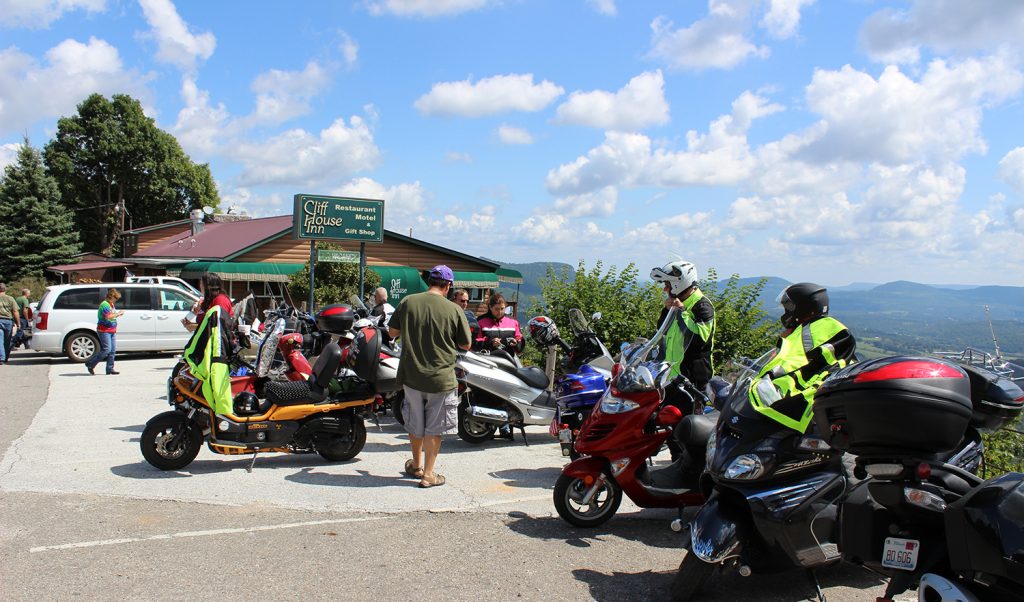 This biker-friendly town will host the annual Scooting the Ozarks Rally on Sept. 14-17. Like its name suggests, this is a rally for riders of scooters, which are smaller and less powerful than motorcycles. It’s almost impossible not to have fun driving to Eureka Springs – Highway 16 to Highway 23 from Fayetteville, Highway 23 all the way from I-40 coming from south or central Arkansas, or Highway 21 from I-40 through Berryville, where you can then loop onto Highway 221 south – known as Racetrack Road and County Road 302 toward Eureka Springs. Bell called Highway 221 one of the top 10 stretches of road in the state.

“It’s got gorgeous scenery, it goes across the Kings River, and it’s got sweeping turns,” Bell said. “In the fall it’s so spectacular – there are tunnels of foliage.” 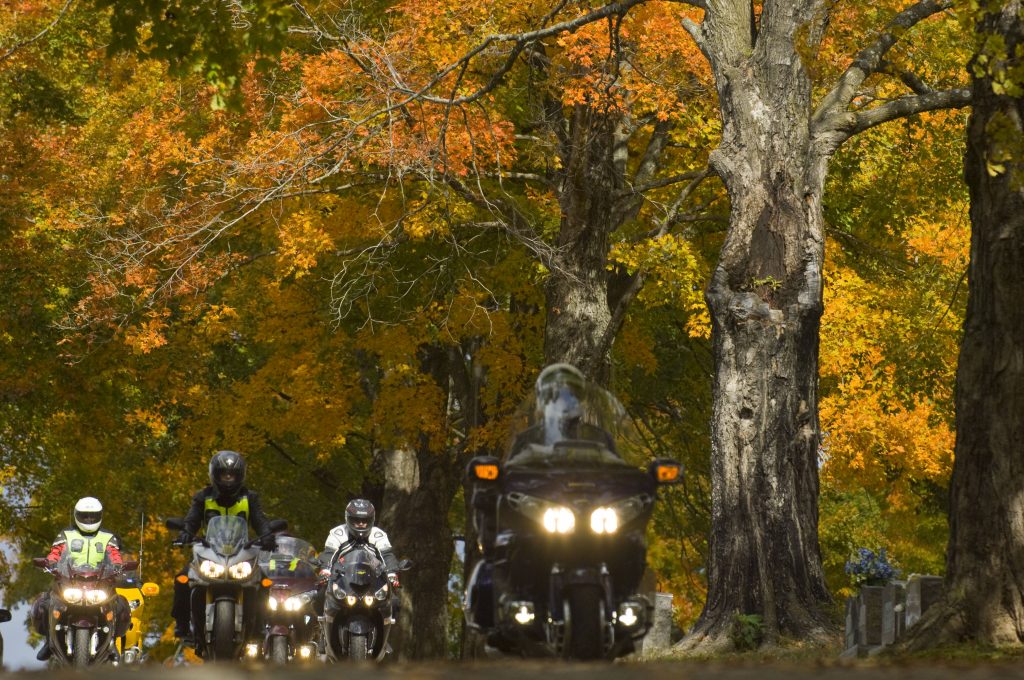 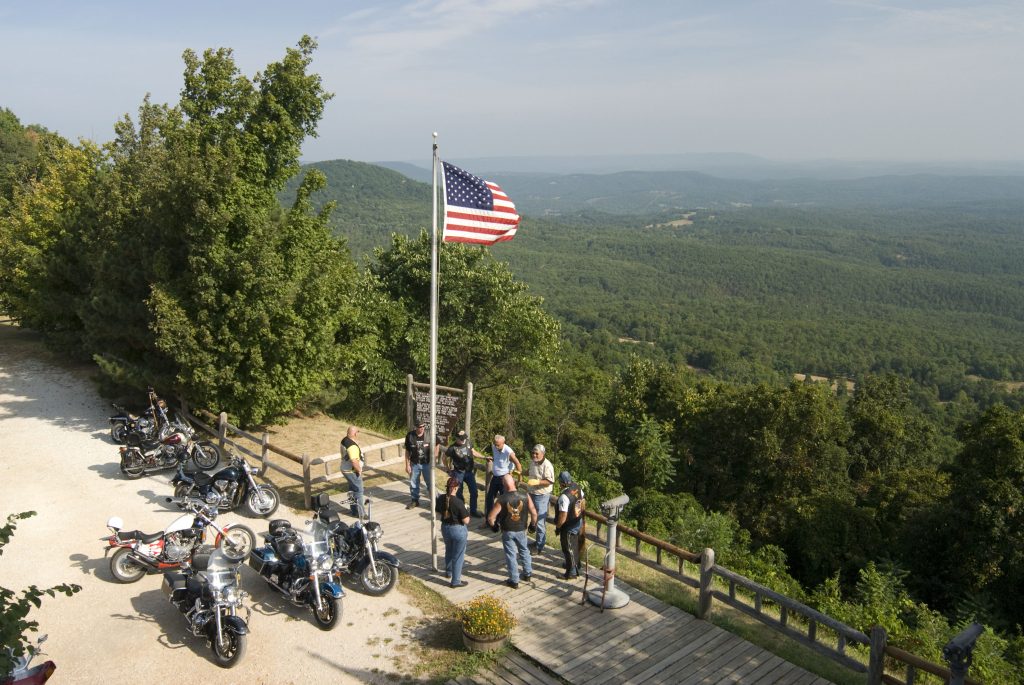 The Ride the Ozarks Rally, Oct. 6-9, includes a number of mapped rides with names like the Jasper Disaster and the Ozark Moonshine Run that explore hundreds of miles of Ozarks back roads. Riders coming from the south can travel Highway 7 and Highway 27. From Central Arkansas, detour from  Highway 65 onto Highway 16 at Clinton and then take Highway 7 into Harrison, or take 65 up to Marshall and then branch off to Highway 27 north to Highway 14 to Highway 7. Both of these routes take in some of the state’s prime motorcycling roads. If you’re coming from the east, pick up Highway 14 at Batesville or Newport. From the northwest, plan a route that includes Highway 16 from Fayetteville or Highway 21 from Berryville. Neither is exactly a straight shot – for that, Highway 62 or Highway 412 will do – but they’re a lot more fun if you’ve got the time.

And what about the flatter half of the state? Its roads might not get as much attention as the serpentine stretches of the Ozarks and Ouachitas, but there’s still plenty to explore. Part of the fun of traveling backroads is exploring the culture of small towns, and there’s no shortage of culture in the Delta.

“It’s a great place to visit if you’re interested in music,” Bell said. He suggested taking Highway 42 through the tiny town of Twist, where there’s a historical marker commemorating the time and place where B.B. King named his guitar Lucille. Or ride the section of U.S. 61 – known as the Blues Highway – that runs in Arkansas from just north of West Memphis to Blytheville.

“Any place you go is more fun on two wheels than on four,” Bell said.

[dropcap]Another[/dropcap] great route to try is Highway 14 from Mountain View to U.S. 65 just south of the Arkansas/Missouri border.

“It’s a twisty, spectacular road through the woods,” Bell said. And it’s close to the Peel Ferry across Bull Shoals Lake, which Bell said is the last ferry boat crossing in Arkansas.

“It’s fun,” Bell said of the ferry crossing. “You will almost always find motorcycle riders on it.”

To get to the ferry, take Highway 125 north from Highway 14. If you don’t want to turn around and come back, continue up Hwy. 125 into Missouri, where Highway 160 west heads back through the Mark Twain National Forest towards Branson.

On the western edge of Arkansas, the 50-mile Talimena Scenic Drive begins on Highway 88 in Mena and goes west through the Ouachitas toward Talihina, Okla. The road turns into Oklahoma Highway 1 at the state line. The route is packed with scenic vistas and historical sights, so plan to meander.