Arkansas’ old-school tourist attractions range from the awe-inspiring to the downright goofy.

[dropcap]August:[/dropcap] The month everyone loves to hate. It’s too late to go to the beach, but it’s too hot and humid to sit comfortably on the porch.

So, it’s 31 days in the broiler for us until September arrives, with its ever-relaxing three-day Labor Day weekend and the promise of breathable air once again. In the meantime, why not enjoy a good laugh, and what better way to find a few than by setting out in a gasoline-powered icebox to explore some of our state’s good old-fashioned, whimsical roadside attractions?

First stop: the giant razorback in Berryville. No, we’re not talking about an especially hefty former football player working at the local furniture store. This giant razorback looks like a supersized replica of the iconic Razorback helmet on wheels. Built for Joe and Savannah Parkhill almost 40 years ago, the float has been a regular in local parades ever since. You’ll find it at 1241 U.S. 62, outside the Country Bazaar Publishing Co. shop. Call (870) 423-3131 for more information. 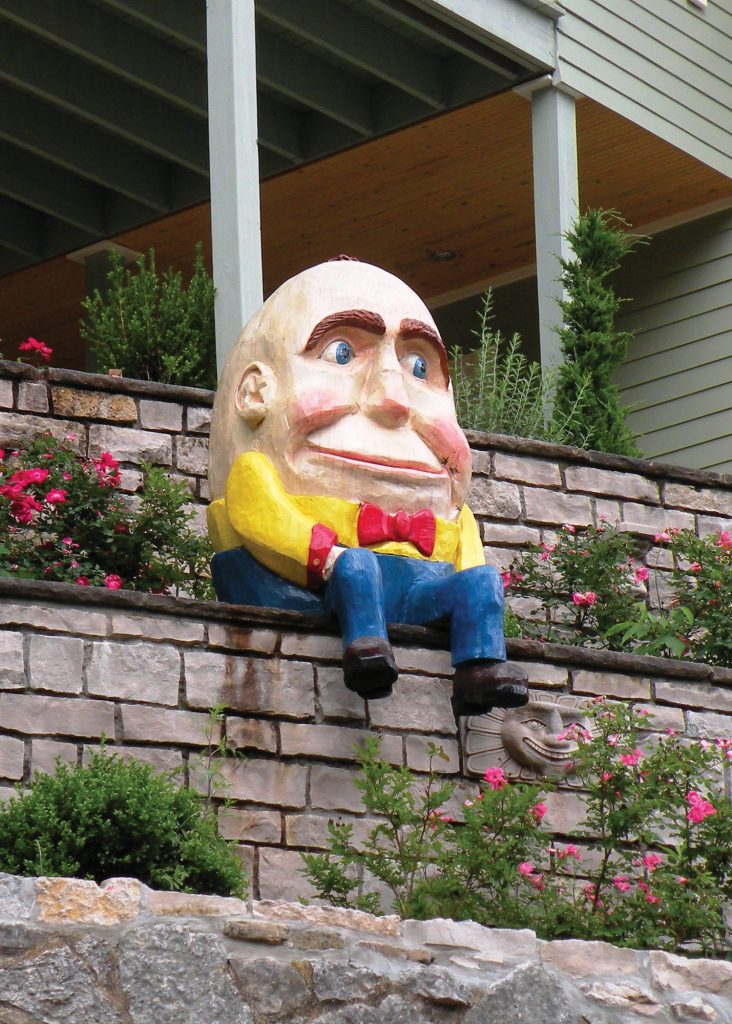 Just down the highway in Eureka Springs, a 500-pound statue of literature’s most famous egghead sits, yes, on a wall, next to Basin Spring Park in downtown Eureka Springs. You can climb up to Humpty Dumpty from the intersection of Main and Spring Streets. But, you know, be careful … we all know how the story ends.

Before kale was cool, spinach was king, and back in the late 1980s, nobody canned more spinach than Allen Canning in Alma. No need to taste the stuff to share the town’s pride — just wave at the 8-foot-tall statue of Popeye (photo at top of page) that squints out over the town square. The town’s water tower gets in on the action as well: It’s painted to look like the world’s largest can of spinach. 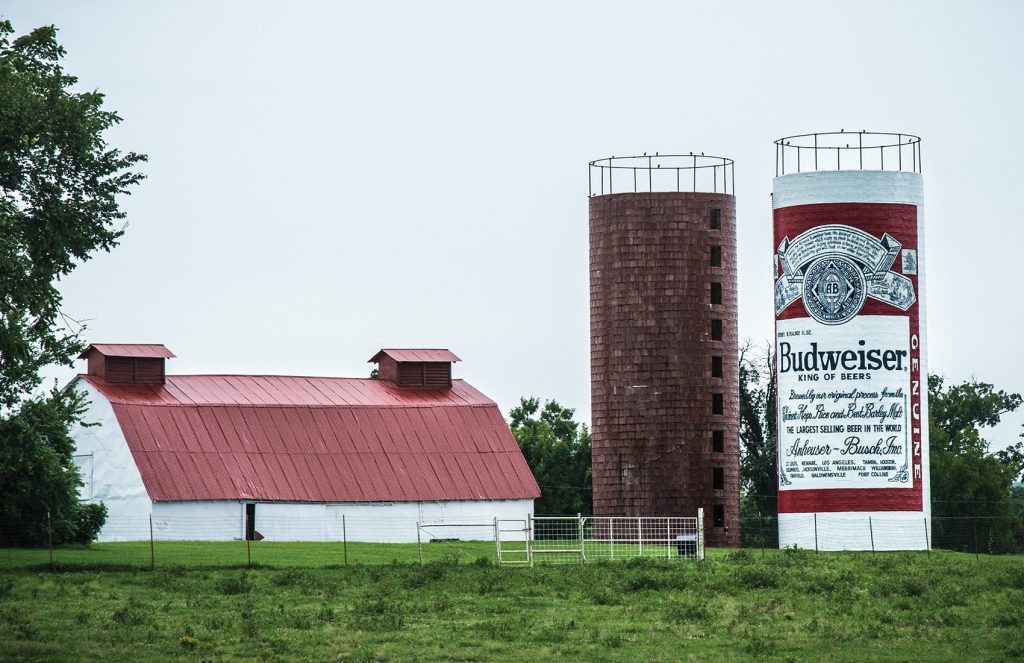 Giant Budweiser beer can in Lavaca. Photo by Ashlee Nobel

Continuing the things-painted-to-look-like-other-things theme, there’s also a giant Budweiser beer can in nearby Lavaca. Beneath the red, white and blue “Bud” paint is a silo owned by a cattle rancher and local beer distributor whose favorite brew is, well, unsurprisingly obvious! The silo was painted in the mid-1970s, and Budweiser even made a commercial featuring video of the paint job in progress. According to the can’s label, it would hold 8,734,902 fluid ounces — the equivalent of 121,318 six-packs. So belly up to the can on the southeast corner of Highways 22 and 96. 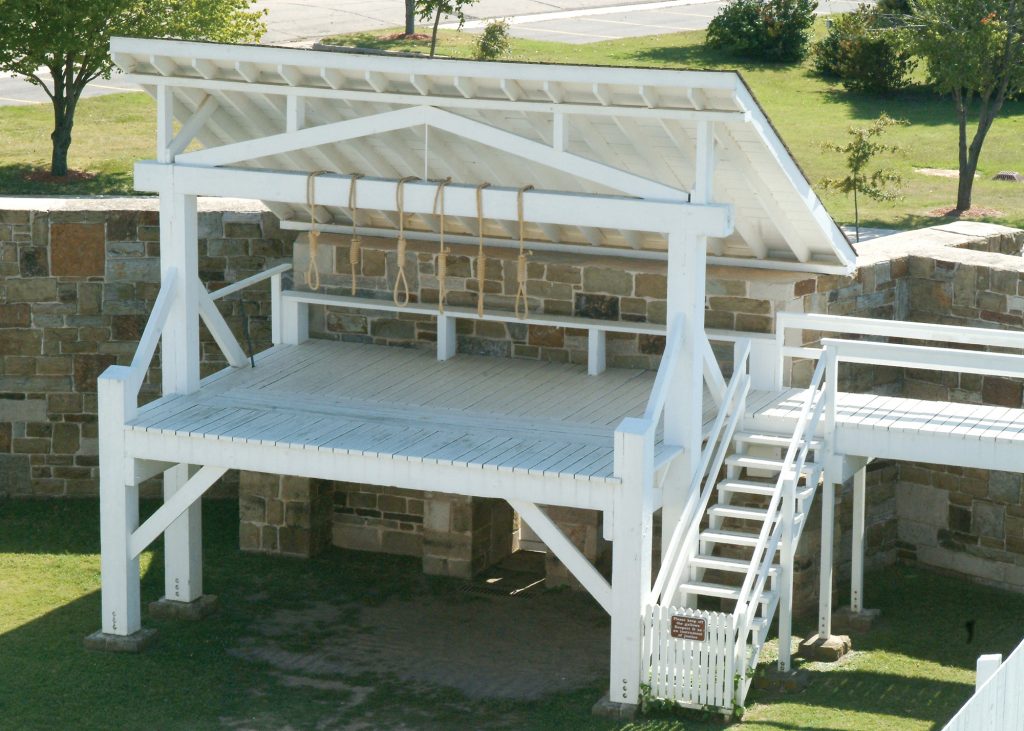 When Isaac Parker was appointed federal judge for the Western District of Arkansas in 1875, the area was not exactly known for its law and order. Parker established harsh justice, earning the nickname “Hanging Judge Parker” after six convicted murderers were hanged at the same time on a September day a few months after his arrival to the area. Over the next 21 years, Parker sentenced 160 men to death, 79 of whom were hanged. The Fort Smith National Historic Site at Third and Garland Streets includes a reproduction of Parker’s infamous gallows built on the site of the original. For more information, call (479) 783-3961. 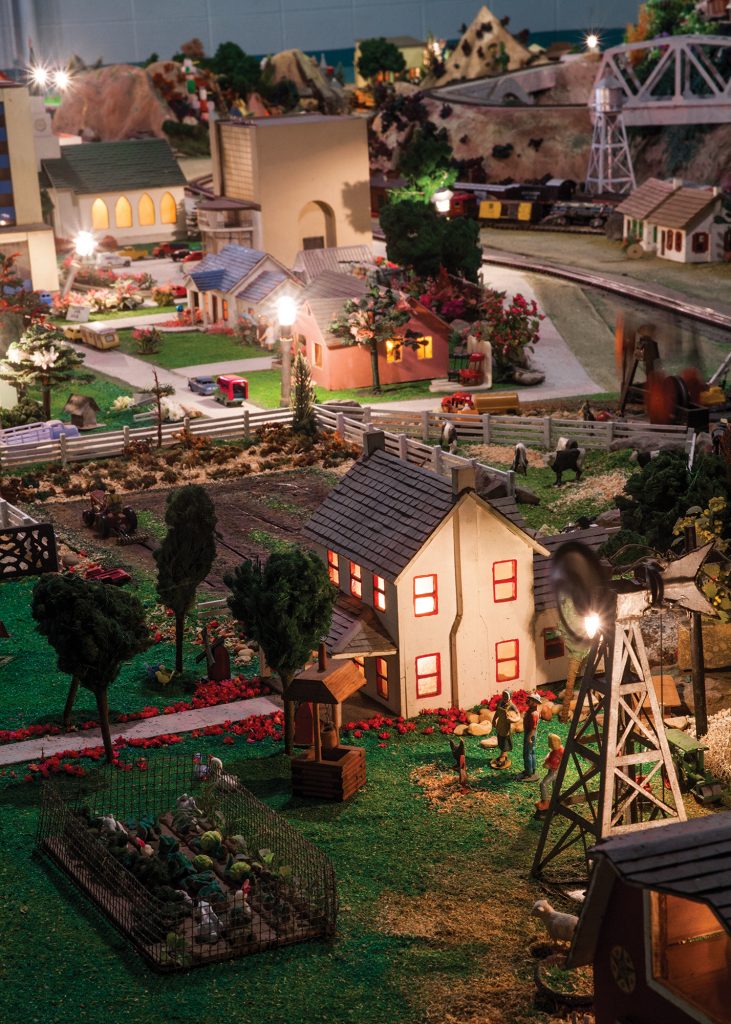 For a complete change of pace, head over to Tiny Town in Hot Springs. Imagine a Depression-era kid with a thing for toy trains. Now imagine one year that kid declines to flip the off switch on his small Christmas train display, and instead begins to add to it — hand-fashioning piece after piece from all the stuff his family throws away. Over the years, and on into decades, that boy, Frank Moshinskie, used aluminum foil, toothpicks, hangers, tin cans and weeds to create what eventually became Tiny Town: the Wild West, which features hand-carved miniatures of Mount Rushmore, Niagara Falls, St. Jude’s Hospital and dozens more. It is also populated by figurines of both the famous — Mr. T and Elvis, for instance — and the anonymous, like a picnicking family. Many of the scenes are animated, and visitors can control some of them — including a Wild West shootout — by pushing buttons. Moshinskie died in 1998, but his family continues to operate Tiny Town at 347 Whittington Ave., in Hot Springs. It’s open from 10 a.m. to 4 p.m. Monday through Saturday. Admission is $6 for adults and $4 for children. For more information, log on to tinytowntrains.com. 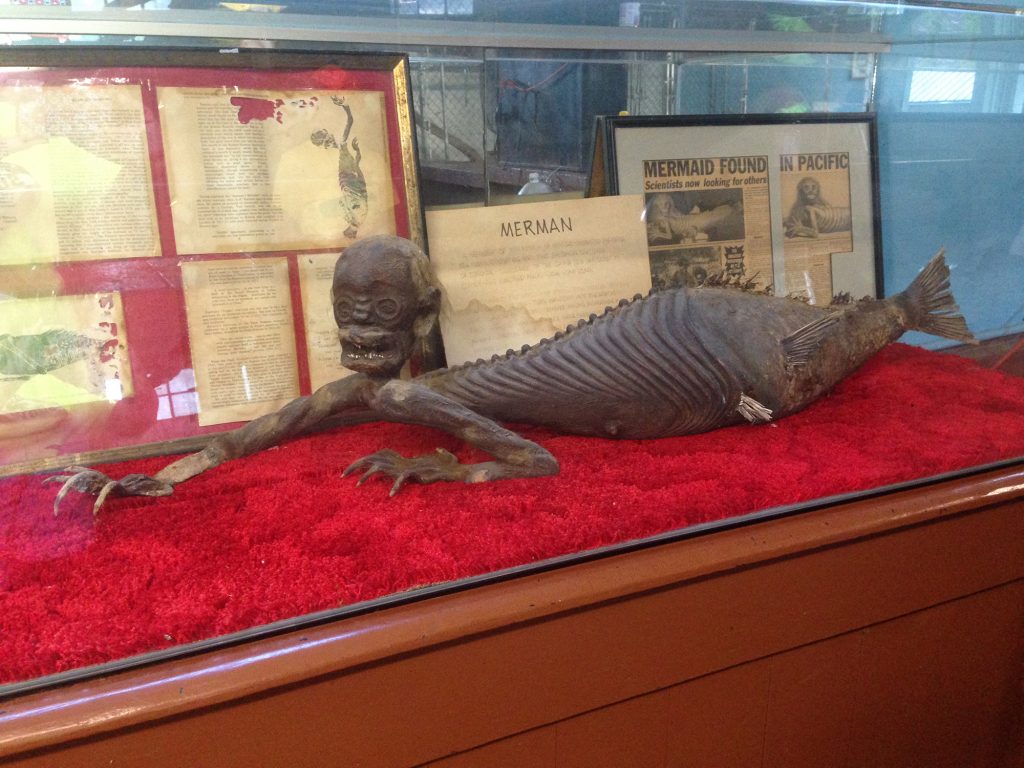 Down the road at 847 Whittington Ave. is the Arkansas Alligator Farm and Petting Zoo, a Hot Springs institution since 1902. Now, sure, you can go see the gators or pet the goats, if that tickles your fancy. Or you can embrace the wackiness and make a beeline for the display case holding the 100-percent authentic, for real, mummified merman. The farm is open from 9:30 a.m. to 5 p.m. daily. Call (501) 623-6172 for more information. Admission is $9 for adults and $7 for children. 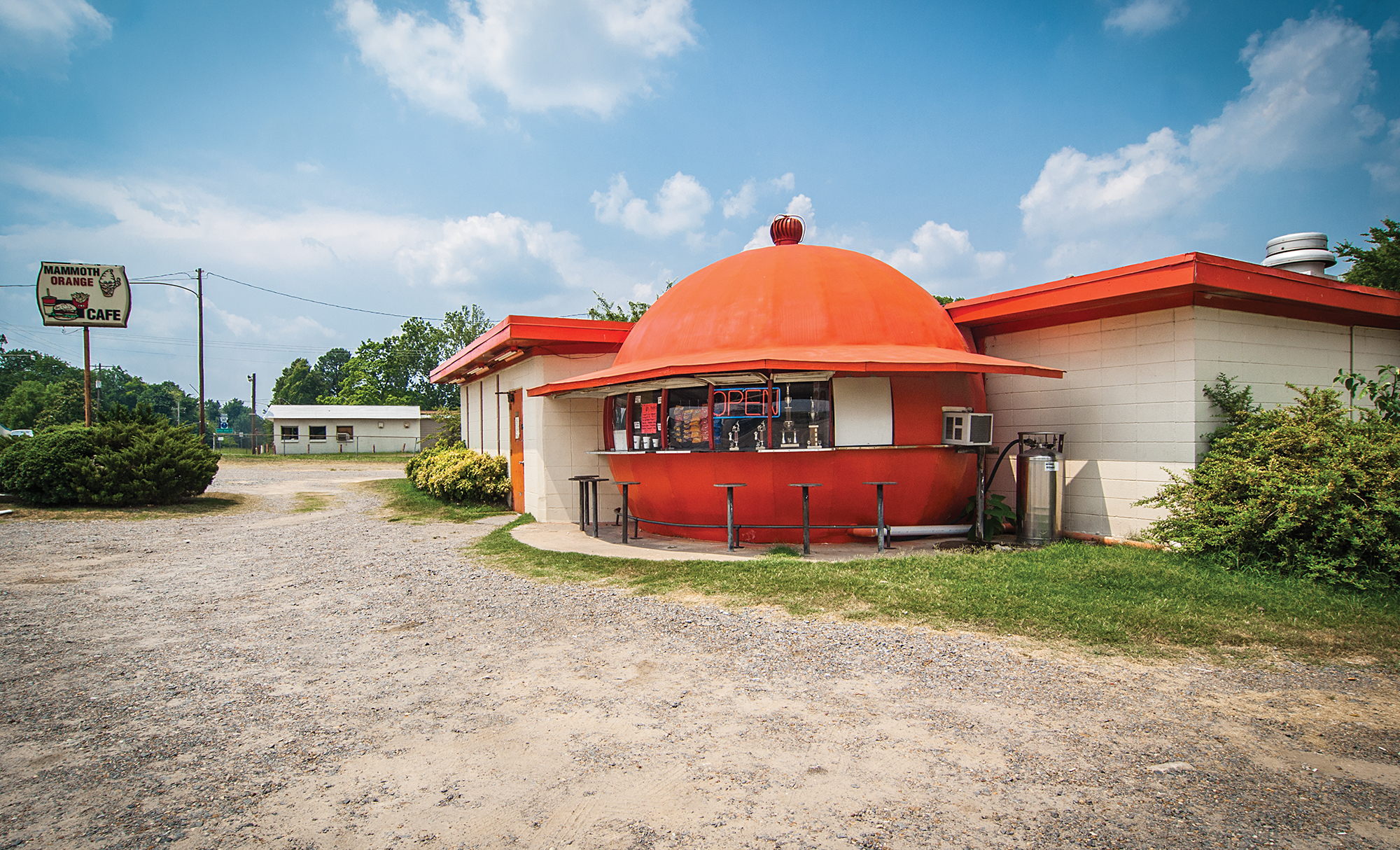 The Mammoth Orange Café in Redfield. Photo by Ashlee Nobel

The Mammoth Orange Café, an institution in Redfield for 50 years, looks exactly as its name suggests: like a big ole piece of citrus fruit, with windows around the middle. The original domed “orange” was built in 1966, and regular, straight-sided cinderblock additions were built on later. Stop in for a burger or just take a selfie in the parking lot. The café is located at 103 Hwy. 365 and is open from 8:30 a.m. to 9 p.m. Monday through Saturday; call (501) 397-2347 for more information. 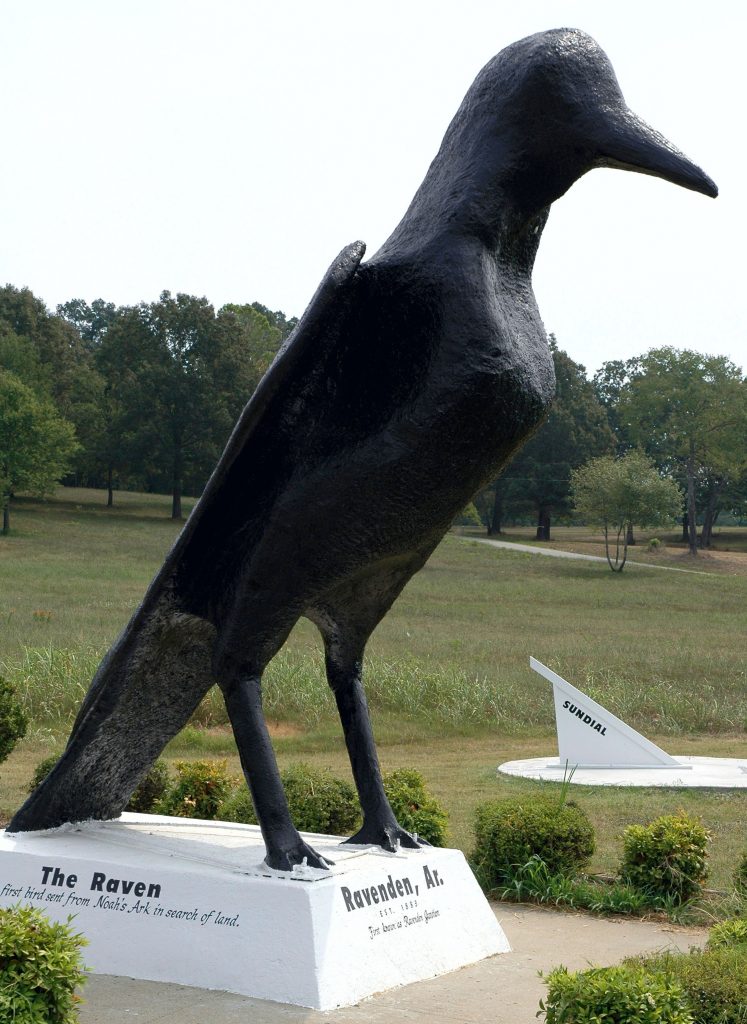 12-foot statue of a raven in the outskirts of Ravenden. Photo courtesy of Arkansas Parks & Tourism

It helps to know this one’s coming. The 12-foot statue of a raven that glowers down from a perch on the outskirts of Ravenden might scare the daylights out of you if you were to run into its enormous sharp beak — straight on and without warning. The statue was commissioned by a local resident and first built in 1991, but vandals burned the original and its replacement. The existing statue, built in 1996, is made of more flame-resistant materials. You’ll find it on Hwy. 63, at the edge of town.

The USS Razorback submarine might not inspire giggles, but a tour through its close confines will at least help you appreciate the unrestricted quantities of air available outside, however hot and sticky it may be. The submarine was built during World War II and used until 1970, when it was transferred to the Turkish navy. Turkey decommissioned it in 2001, and it arrived in North Little Rock three years later as the flagship exhibit of the Arkansas Inland Maritime Museum on Riverfront Drive. The submarine is open from 10 a.m. to 6 p.m. Wednesday through Saturday and 1 p.m. to 6 p.m., Sundays. Admission is $5 to $7.50. 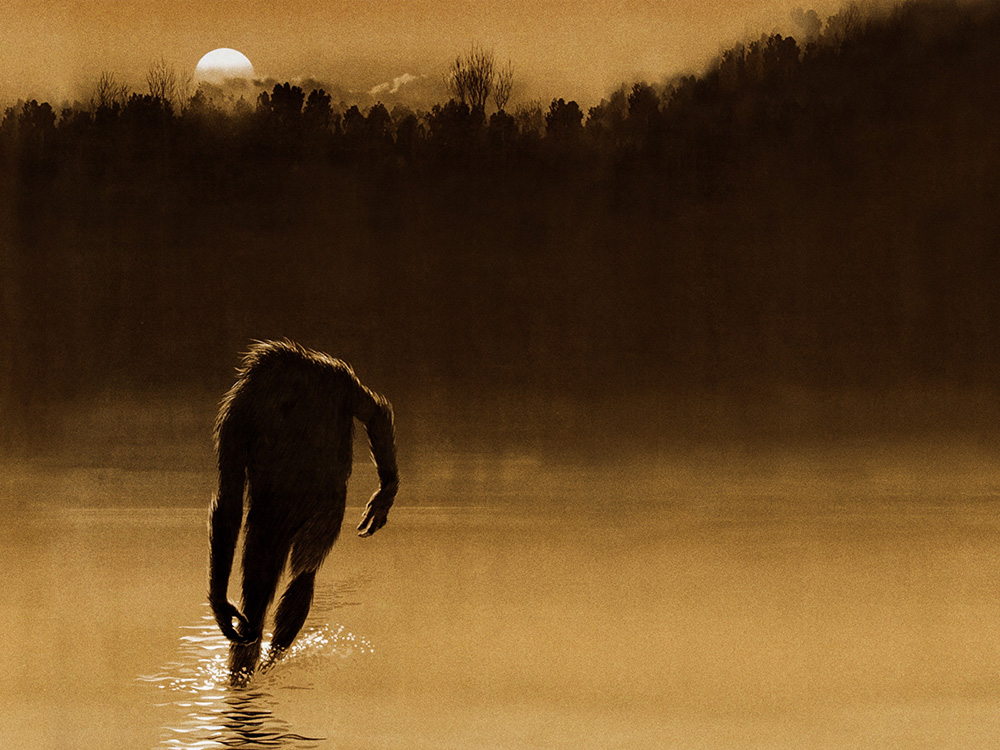 The legend of the Bigfoot-like Fouke Monster stretches back to at least the early 1960s, but it first came to prominence in 1971, when a 25-year-old man told a local constable that a monster had attacked him. The creature was 7 feet tall, he said, an ape-man with red eyes and huge claws. His wife and brother had also seen the monster, he said, and it left tracks and claw marks around his house. The man was treated at the hospital for minor claw injuries and mild shock, and the family moved out of the house a week later.

More sightings came shortly thereafter, and a local archaeologist was even brought in to investigate a set of three-toed footprints found in a stand of trees. Things died down after three men were fined $59 each for filing false reports that the monster had attacked them, but the arrival of a film crew a few months later revived interest. 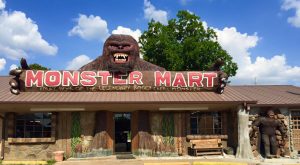 The 1972 docudrama, “The Legend of Boggy Creek,” was a success at drive-ins nationwide, and people have continued to report sightings periodically over the last 40 years. You can even get your picture taken looking through a hole-in-the-face of a sheet-metal cutout of the Fouke Monster. Sightings are few and far between these days, but it’s been said that the Fouke Monster continues to dart across the occasional county road here or there. So, who knows? Park your car in the right spot on the right night and you might get lucky. Just make sure you lock the doors.