From yachts to kayaks, johnboats to Jet Skis, you’ll find your kind of fun on Arkansas’ abundance of lakes and rivers.

Well, OK, it also means heavenly peaches and not-so-heavenly heat, with a side of mosquitoes, a healthy dose of tomatoes and maybe a baseball game or two.

But if you don’t dip a paddle or a fishing pole or just your own toes into one of our state’s abundant and beautiful bodies of water sometime between now and Labor Day, you are simply doing summer wrong.

“Every year, thousands of people flock to the pristine lakes and rivers of Arkansas,” said Leah DePietro, communications manager for the Arkansas Department of Parks and Tourism. “Our scenic beauty truly sets our state apart.”

Thankfully, you don’t have to buy a lake house to enjoy them.

You can find detailed information about many lakes and rivers at arkansas.com, the state’s official tourism website, but we’ll take a look at some of the highlights here.

Starting in the southwest part of the state, Millwood Lake near Ashdown is a favorite for fishing —catfish, crappie, bluegills and several kinds of bass — and for birding. With more than 333 species in the area, it boasts 15 first-in-state sightings. Millwood State Park and Corps of Engineers recreational areas offer plenty of campsites, trails, picnic shelters and boat ramps. 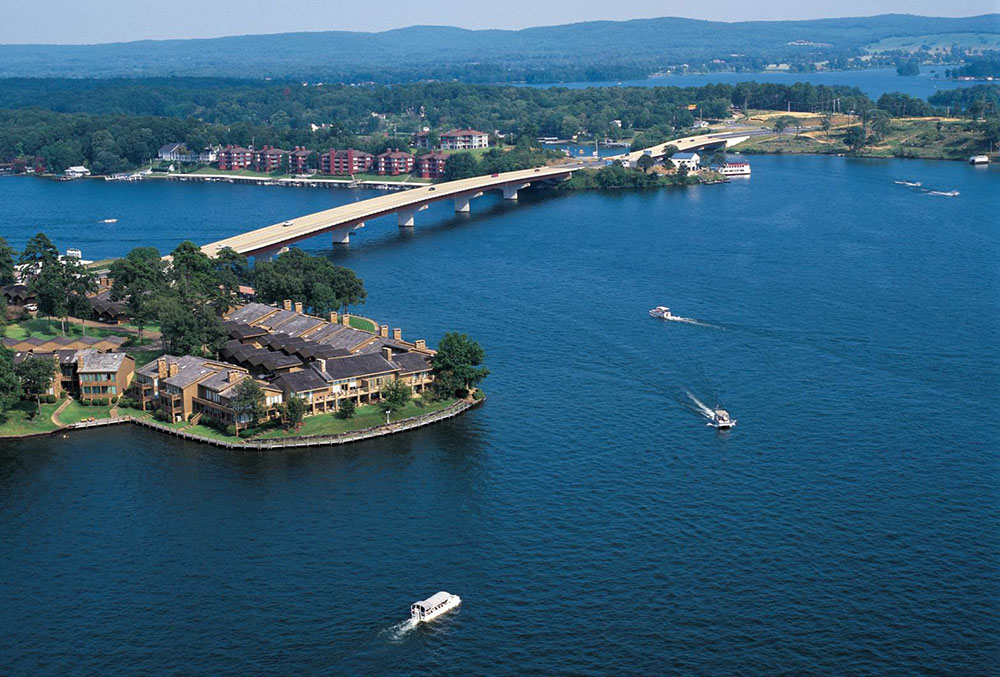 The area around Hot Springs has four lakes to choose from. Lake Hamilton is one of the most popular recreationally, and it is one of the most developed lakes in the state. Much of its shoreline is built up with condos, motels and restaurants, so Hamilton is a great choice if roughing it is not on your agenda. It’s also easy to rent boats and other accessories from the lake’s marinas, and Hill Wheatley Park offers a sandy beach, picnic tables and restrooms.

Nearby Lake Ouachita offers a quieter experience. The 40,000-acre lake is almost entirely within the Ouachita National Forest, and it’s known for its pristine shoreline and clear waters. Ouachita is a popular choice for bass fishing, recreational boating, scuba diving and camping, both in developed campsites along the shore and primitive sites on the lake’s more than 100 uninhabited islands. Commercial marinas offer rentals for houseboats, sailboats and fishing rigs, among others.

Bald eagles are fond of DeGray Lake, and bass seem to enjoy its waters as well. It’s also the site of Arkansas’s only resort state park — complete with a 96-room lodge, 18-hole championship golf course, heated swimming pool, tennis courts, and a marina — and there’s plenty of camping to be had, too.

Moving north a bit, Lake Dardanelle and Greers Ferry Lake are great choices for folks in central and north-central Arkansas. Dardanelle is known for its fishing, and there’s plenty of camping to be had at both Lake Dardanelle State Park and Corps of Engineers campgrounds. Greers Ferry holds bragging rights as the home of a world-record hybrid bass caught in 1997, among several other state-record catches. The lake’s tributaries are good spots to fish for trout as well, and Greers Ferry’s location near Heber Springs and Fairfield Bay put it close to luxury accommodations, good restaurants and shopping, and land-based fun like golf and tennis. 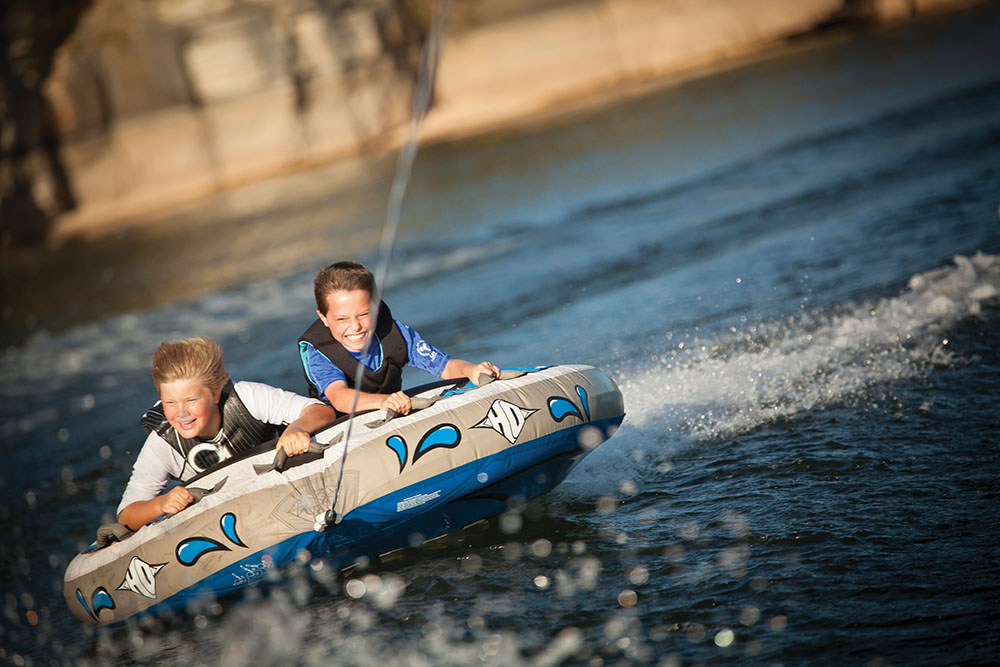 Continuing north, three major lakes popular with anglers hug the Missouri border: Beaver Lake, Bull Shoals Lake and Norfork Lake. Bull Shoals is the largest lake in Arkansas, and visitors can take advantage of both warm-water fisheries in the lake and cold-water fisheries in the White River. A total of 20 parks ring the shoreline, so it’s also easy to access the water for swimming, boating and camping. Its blue waters are popular with scuba divers around the country.

It seems like just about everyone who grew up in Arkansas can tell you a story about the time their canoe tumped over and they just about lost their car keys to the bottom of the Buffalo River. It’s virtually a rite of passage. And while the Buffalo is nearly synonymous with float trips for Arkansans — a well-earned distinction — it’s far from the only option.

To the east a little ways, the Spring River is another popular stream for canoeing, and can be a little more, ahem, adventurous than the Buffalo’s typically placid lower sections. The Ouachita River winds through the Ouachita National Forest, and, like the Buffalo, is calmer on the lower sections. The lower end of the White River includes the Dale Bumpers White River National Wildlife Refuge, where paddlers can follow a canoe trail and catch glimpses of birds, deer and possibly even a black bear.

Arkansas’ rivers also offer some world-class trout fishing. The White River may be the best known, but the Little Red and North Fork are popular choices, too.

All that great fishing means, of course, some great eating. You’ll find some of the state’s best restaurants near its riverbanks and lakeshores.

Here we give you a sneak peek of some of the state’s best fish-centered eateries.

Gaston’s White River Resort in Lakeview features trout, of course — if you’re feeling adventurous, try the trout poppers — as well as catfish, steaks and other seafood. The historic restaurant’s unique décor is part of the fun.

Don’t miss Dondie’s White River Princess in Des Arc, built to resemble a steamboat beached on the riverbank. The restaurant’s buffet, which features catfish and crawfish, is well regarded, but the view of White River rolling past is at least as much of a draw.

In the Lake Dardanelle area, hit the buffet of catfish, hushpuppies and other Southern home-cooking favorites at the Catfish N. It sits in an unassuming wooden building on the western bank of the Arkansas River about a mile below the Dardanelle Lock and Dam.

There’s plenty of waterside dining to be found in Hot Springs, primarily on Lake Hamilton. Luna Bella features upscale Italian cuisine, and Fisherman’s Wharf and Cajun Boilers offer more casual dining experiences. And if just being next to the water isn’t quite enough, check out the lunch and dinner cruises on the Belle of Hot Springs riverboat.

Another favorite along the White River is Josie’s at the Lockhouse in Batesville, which serves seafood, steaks, burgers and other American fare, and has a great patio overlooking the river.

If you’re headed to Greers Ferry, try the Red Apple Inn or Janssen’s Lakefront Restaurant, which serves catfish, trout and other seafood, along with steaks and “comfort chow” like fried chicken livers. Nearby, Café Klaser serves a variety of home-cooked fare on the banks of the Little Red River.

On the Road with AY Publisher Heather Baker at The Hilton Branson Convention Center Hotel
October 14, 2020