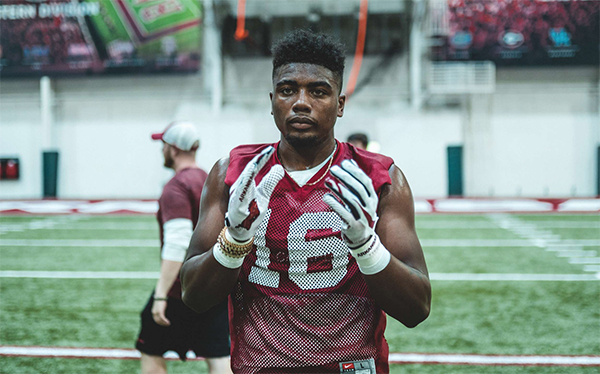 If you peer hard enough into the smoldering wreckage of Saturday’s 51-10 annihilation at the hands of Auburn, you will see the faint outline of a bright spot.

That faint outline is in the shape of Treylon Burks’ enormous hands.

And, for at least one series during that other forgettable disaster, he had those hands all over the game. Early in the third quarter, with the Hogs down 0-17, Burks had something of a one-man coming out party. He gave Auburn’s defenders fit as he flew down field, repeatedly drawing interference penalties. And he made one of the most acrobatic catches this college football this year, a snag in which he rose up, caught a Ben Hicks pass a few feet behind and above him, and then flipped the ball to his other hand and corralled it— all the while crashing to the ground.

The play highlighted Burks’ amazing concentration and coordination. Going into the game, NFL scouts were already intrigued by the 6’3”, 223 pound freshman out of Warren, noting that he catches punts in a way they have never before seen.

It’s clear Burks’ 10 1/4” hands (measured by span) are a great asset when nabbing the ball. It appears he has the largest hands of any of the skill positions on the Hogs football team this year.

They are so big that the 5XL receiving gloves he needs are not made. He must use 4XL gloves instead. “I just squeeze my hands into the 4XL as best as I can,” he said. “By the end of the week, my hands be poking out the ends of the gloves.”

At this point, if Burks were an NFL wide receiver, he’d be in the 93rd percentile of his position for hand size. That position has an average width of 9.386 inches, according to MockDraftable.com. Of the hundreds of wide receivers coming into NFL since 1999, only 24 of them have had larger hands than Burks.

Indeed, of the top NFL wide receivers below, only one has larger hands. That star, the Saints’ Michael Thomas, has snagged more catches than any other NFL player in his first three seasons with those 10 ½” meat cleavers of his.

No doubt, at some point soon after the 2022 NFL Draft, Treylon Burks strives to see his name on a top NFL receivers list like this. Hopefully, when he does throw his name into the draft, it will be from Fayetteville and not some other program that has lured him away.

Evin Demirel is the author of African-American Athletes in Arkansas: Muhammad Ali’s Tour, Black Razorbacks and other ForgottenStories.