True Grit and the Man Who Wrote It 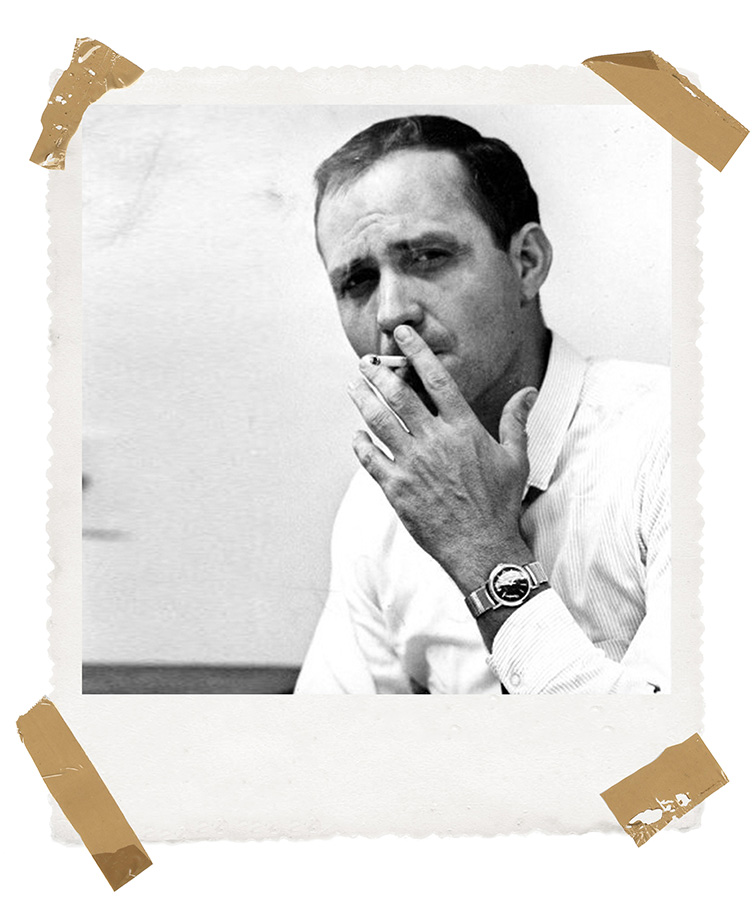 A favorite of his brother Jonathan, this photograph of Charles Portis was taken around the time True Grit published. Photo courtesy of Jonathan Portis.

“People do not give it credence that a fourteen-year-old girl could leave home and go off in the wintertime to avenge her father’s blood but it did not seem so strange then, although I will say it did not happen every day.”
Charles McColl Portis, known to his friends as Buddy, was born in El Dorado in 1933. As a child, he traveled the state, living for a time in Hamburg and Mount Holly. As an adult, he served in the Marine Corps during the Korean War, reaching the rank of a sergeant by the time he was discharged.

After leaving the military, he enrolled in the University of Arkansas as a journalism major, later remarking that “it would be fun and not very hard, something like barber college. Not to offend the barbers. They probably provide a more useful service.”

And though he may have come to the profession by chance, Portis was an exceptional journalist in an era when newspapers were thriving. He started at the Commercial Appeal in Memphis, worked for two years at the Arkansas Gazette and four years at the New York Herald Tribune. His career took him from Tennessee to Arkansas to New York City to swinging London, where he held Karl Marx’s old job as the Tribune’s London bureau chief.

But despite his journalistic success, Portis returned to the states, holing up in an Arkansas fishing shack to try his hand at fiction. And by 1966, he was a novelist, having released his first book, Norwood. The novel tells the tale of namesake protagonist Norwood Pratt, an aspiring country singer and Korean War vet who travels from Texas to New York to recover a debt.

The book, a deadpan classic, introduced us to Charles Portis – a writer’s writer. And two years later (and exactly 50 years ago), he released the novel that would cement his literary legacy forever: True Grit.

True Grit, which was first rolled out as a series in The Saturday Evening Post, tells the tale of itinerant 14-year-old protagonist Mattie Ross as she travels across Indian Territory in search of the man who killed her father. She’s joined by an ornery, cork-pulling U.S. Marshal named Rooster Cogburn and sharp-dressed, line-walking Texas Ranger LaBoeuf. 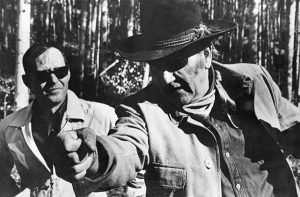 “Charles Portis got a real Mark Twain feeling, the cynicism and the humor,” said John Wayne in a 1969 interview with Roger Ebert. “It’s the authentic stuff.”

It was a hit, adapted into a major motion picture within a year. The movie would star fellow Arkansas native Glen Campbell as LaBoeuf, alongside cinematic legend John Wayne as the anti-hero Rooster and Kim Darby as Mattie. The film earned Wayne his only Oscar and Portis a serious following.

“Charles Portis got a real Mark Twain feeling, the cynicism and the humor,” said John Wayne in a 1969 interview with Roger Ebert. “It’s the authentic stuff.”

The book was adapted to the big screen, again, in 2010 by the Coen Brothers. Starring Jeff Bridges, Matt Damon and Hailee Steinfeld, the film was nominated for 10 Academy Awards, including Best Picture.

Despite all of his success, Portis never lingered in the limelight. The media often described him as a recluse, hiding out in Arkansas, away from their cameras and recorders. Some U.K. reporters even questioned whether or not he was still alive. 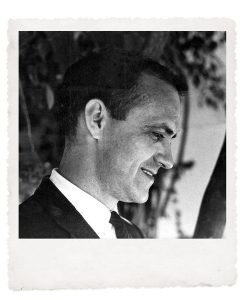 Despite the reputation of being a recluse, Portis enjoyed spending time with friends at Faded Rose, Cajun’s Wharf or Town Pump.

Portis wasn’t a recluse; though, just a bit misunderstood.

“Reclusive wouldn’t be a word I used to describe him. Private, maybe,” says Jay Jennings, senior editor of the Oxford American and longtime friend of Portis. Jennings, a Little Rock native, met Portis in the mid-1980s. After a teaching stint in Dallas, Jennings moved back home before pursuing a career in New York City as a writer and standup comedian. One day, before moving, he passed along a note to Portis, who lived near his parents, asking the author to sign a copy of his latest book.

“He wrote me back, inviting me to lunch,” Jennings says. “I don’t know what prompted that, whether he’d seen some of my work, thought I was serious about being a writer… I met him at Town Pump, and we had lunch at the bar. I remember the bartender asking him, ‘Hey, Charlie are you going to put me in your next book?’ And he said, ‘You don’t want to be in this one.’ I guess he was working on Gringos at the time.”

Portis would continue to have an impact on Jennings’ life and career, providing him with confidence and much needed encouragement during “lean times” in New York. When he returned to Little Rock to work on his own book, the two met once a week for a drink, most often a glass of whiskey at the Faded Rose – not exactly the kind of behavior one would associate with a recluse.

“It’s a little bit of a myth,” Jennings says of Portis’ reputation. “It’s true he didn’t want to do any interviews, which is a little ironic because he was a journalist… He just wants to have his work read and judged off of the work, not all the other trappings that seem to go along with being a writer.  He cares about having his work read. That’s important to him.”

Jonathan Portis was just a kid when his older brother began working on True Grit. He remembers the letters Charles would send from rural Oklahoma, the primary setting for his novel.

“He was traveling around the territory where most of the book takes place, getting a feel for the land,” says the younger Portis. “I was a kid at the time. He wrote letters to my parents, but he didn’t really like to talk about what he was working on. So, he never fully explained what he was doing.

“We just knew he was in Oklahoma,” he adds with a laugh. “Then, True Grit came out.”

According to Jonathan, the manuscript had already been shopped to movie studios before being published as a finished novel. The first film, he says, varied, just a bit, from the text.

In the end of the book, readers learn that Rooster Cogburn died while traveling with a wild west show. But the studio, hoping to capitalize on a sequel, wanted to keep him alive a little longer. After a few failed attempts by the film’s screenwriter to create a proper ending, they turned to Portis. He crafted the final two scenes, Jonathan says. 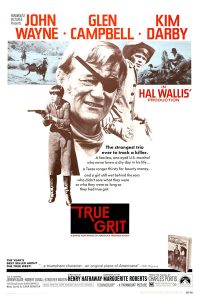 But that wasn’t all he contributed to the big screen adaptation.

“There’s a line in the movie, that’s not in the book, that I’m sure is his,” says Jennings, grinning. “When Mattie meets LaBoeuf, they’re having a back and forth. Mattie, who’s a good Presbyterian, she finds out LaBoeuf is an Episcopalian and says: ‘I figured you for a kneeler.’ And that sounds so much like him.”

Both Portis’ brother and friend note his quick, comic wit. “His comedy sneaks up on you,” Jonathan admits.

While True Grit and the film that followed gave Portis both literary star power and financial security, it also hung around his neck like an albatross for years. It painted the versatile, comedic author as a western-genre writer.
“True Grit was a double-edged sword for him,” says Jonathan. “On one edge of the sword, it was his most famous book. It brought him the most fame and a great amount of acclaim. On the other edge, he got pegged as a western writer.”

Jennings admits it was years after the book and film were released before he gave it a shot, having chalked it up to a yet another genre piece from a western-heavy era.

“I guess I was always a little snobbish about literature,” he says. “I wasn’t a big fan of western movies… I just dismissed it as another genre book.”

It wasn’t until Jennings gained an appreciation for Portis’ other works that he returned to True Grit, the book that sealed the author’s legacy. “I began to appreciate it for being such a piece of great writing, rather than to just put it into a category,” he says. “I began to see a lot more of its humor, the exciting narrative.” 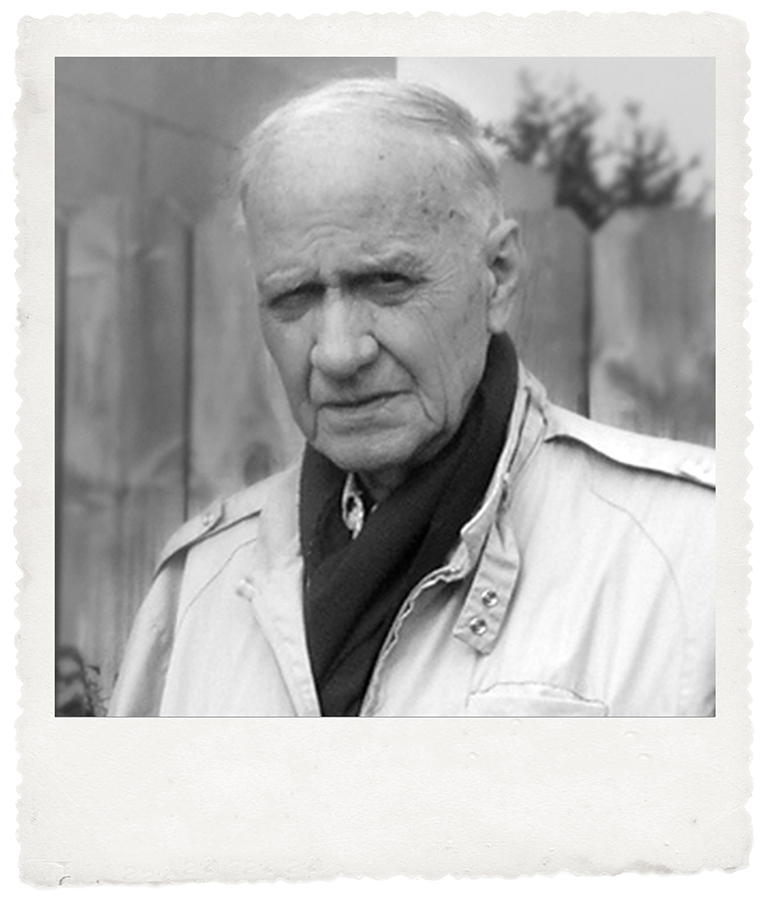 The most recent photo of Charles Portis was taken in 2010 by his brother Jonathan.

The story is set in a specific time and place, but it’s not a period piece. It’s a story that continues to resonate with readers and audiences today just as it did in the 1960s, when westerns were arguably the most popular genre of book and film in America.

“People who have never read the book think it’s just another western, with cowboys shooting each other,” says Jonathan. “But it’s not. It’s about a girl who is determined to do something, and is not going to let anyone get in her way.”

True Grit isn’t just the book’s title. It’s the theme. It’s the quality that Mattie Ross celebrates in herself, as well as her travel companions Cogburn and LaBoeuf. The book may be set in the 19th century American west, but it’s more than a western. It’s a story of survival, determination and, most of all, grit.

“I don’t know what the lifetime of a western is,” says Jonathan, citing a couple of once-popular western novels. “I don’t hear mention of them. The genre may just be an antique.”

But unlike the dusty old books Jonathan mentions, True Grit can be found on the shelves of any bookstore in the country. The legacy of True Grit has persisted, transcending the genre to which it was once confined.

Portis was in his 70s when the Coen Brothers began working on the novel’s second big screen adaptation. And though he chose to sit this one out, he did make some suggestions to the filmmakers.

“He wrote a letter to them, suggesting some music,” says Jonathan. “He thought it should be old-timey, mid-to-late 19th century music. And that’s what they ended up using, in the end, an old hymn.”

The song filmmakers used was “Leaning on the Everlasting Arms,” a hymn published in 1887. And the version of the song they chose was sung by fellow Arkansas native Iris DeMent, whose warbling Ozark vocals bring the critically acclaimed film to a close. The silhouette of a much older, one-armed Mattie Ross walks into the distance as snow begins to fall and Charles Portis’ name appears across the screen.

Time, she says, gets away from us. But thanks to Charles Portis, we’ll always have True Grit.
Join us and Oxford American as we celebrate the 50th anniversary of True Grit, April 20-21. Tickets for the celebratory events are sold through Metrotix.com or by calling (800)293-5949. 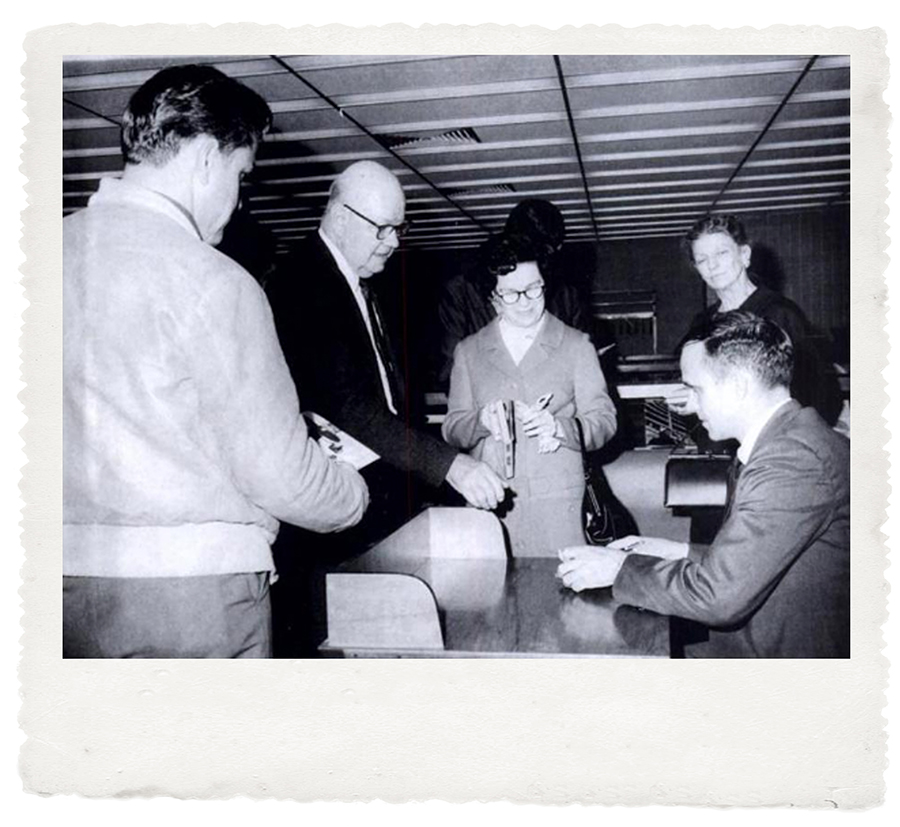 Though Portis never held a book tour, a photo captures him holding a very rare signing for True Grit.