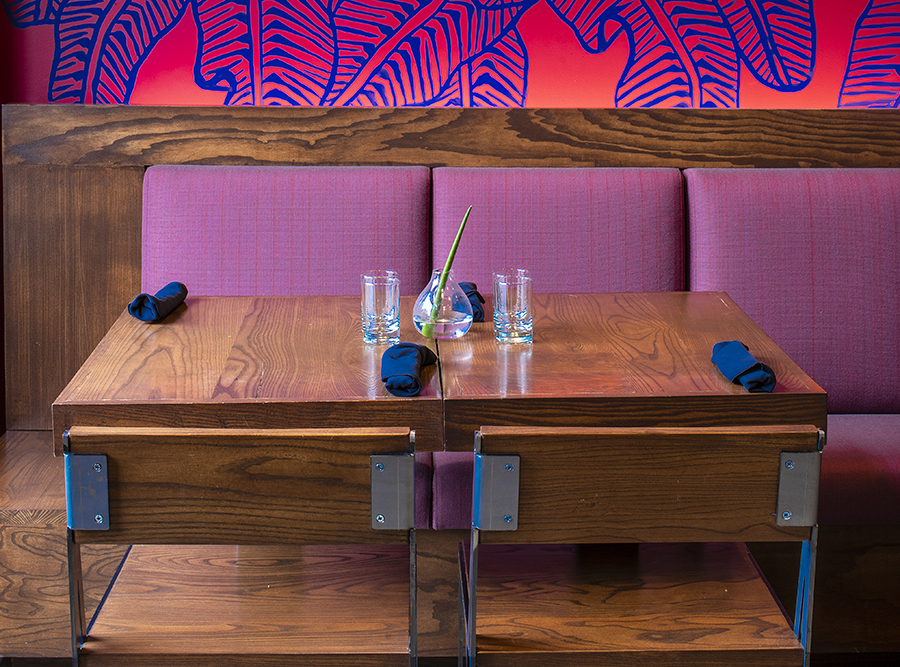 Space, for example, is a specific location. It’s the address on a mailbox in front of a house. Place is how we understand our attachment to that space. It’s how we feel when we’re inside of that house and what makes it home.

Tula, as a space, is a new Mexican restaurant in downtown Fayetteville. Tula, as a place, is a celebration. A celebration of food, culture and connectedness between one another and a pair of communities separated by nearly 2,500 miles. 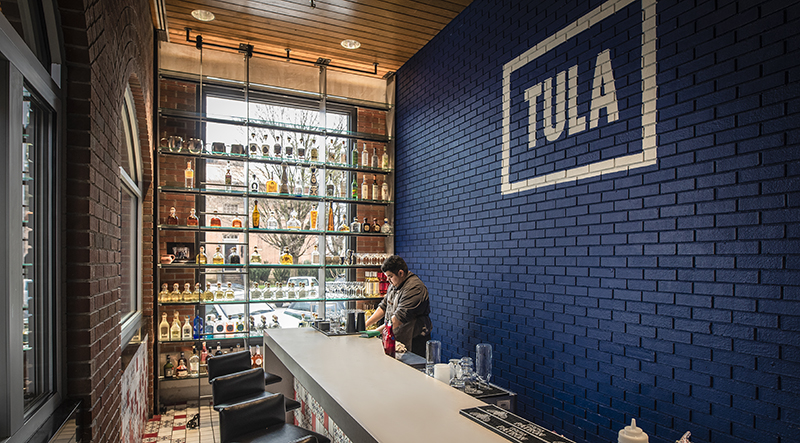 THE SPACE
Tula is located on the first floor of the One East Center on the historic Fayetteville Square. The building is also home to the David and Barbara Pryor Center for Oral and Visual History, the UA Architecture Community Design Center and the Center for Photographers of Color. The beautiful, University of Arkansas-owned building was once a bank. For more about Tula, check out their website: TulaMx.com, or pay them a visit at 1 E. Center Street in downtown Fayetteville.

Juan Bahena explains this, but not in so many words, over a plate of chilaquiles — seared tortillas, fire roasted tomatillo salsa, sautéed onions and queso fresco, topped with a fried egg and slices of tender steak. Bahena is the co-founder of Tula, one of the hottest new restaurants in Northwest Arkansas.

“The idea that is Tula has definitely evolved,” says Bahena. “At one point, we wanted it to be similar to a taqueria, something fast and casual. But the more we talked about it, talked about what we wanted to bring to this area, we thought we might have something a little better than what we were pursuing.”

What Bahena and his business partner, Rodney Barnes, had was a restaurant with an identity, even before it had a space. And that identity, he says, started with the name.

“My wife is from a community in Mexico called Unión de Tula, or the union of Tula,” he says. Tula, the word, is made up of the first letter of the last names of the four families who came together to form the community many years ago. With a little encouragement from his wife, Bahena decided to adopt the name for his new restaurant, which at the time, was nothing more than an idea.

The name gave Bahena’s restaurant the identity it needed to come to life. 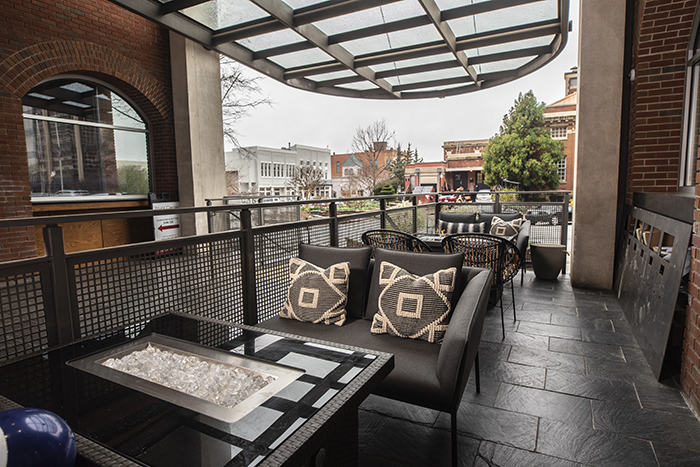 THE SPACE
The Tula team enlisted local architects Polk Stanley Wilcox Architects to execute their design vision for the restaurant. The location was completely gutted last year and remodeled for the modern, distinctive design. The 2,200-square-foot space seats approximately 75 guests, with approximately 58 seats in the main dining room, seven in the bar area, and 10 seats on the patio.

“With the name, we knew how we wanted the architecture to be,” says Bahena. “Tula is in Jalisco, where all tequila comes from, so we knew our cocktail menu would be dominated by tequila. The colors. Our branding. Tula, the community, inspired everything. Our graphic designer even flew down there to spend a few days to help her develop our logo.”

But what’s a restaurant without a menu? Tula’s “place” inspired some of that, too. “So many of the dishes,” says Bahena, “are common to Tula and that region.” 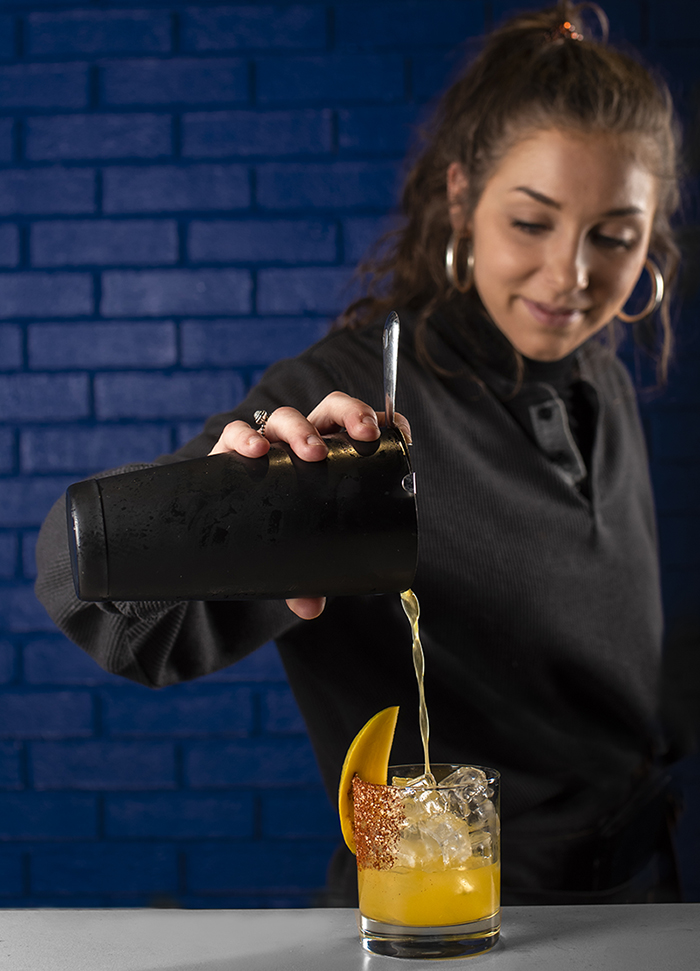 THE PLACE
Head bartender Andres’ favorite entrée is the Cochinita Pibil — a slow-cooked achiote marinated pork shoulder with house pickled red onions, charred habanero pepper chili salsa and black beans. Olivia, a waitress at Tula, loves the Torta Ahogada – a bolillo bread stuffed with refried beans, pork carnitas, tomato sauce, pickled white onion with arbol chili salsa. Juan’s favorite menu item is mole. “It’s all about the nostalgia … My second is the carne asada because I like steak and because it reminds me of summer. It reminds me of cooking out, having fun and being with friends and family.” THE PLACE Price’s favorite dish? That Arroz a la Tumbada. He’s pretty fond of Tula’s Patron-heavy cocktail menu, too. “That’s our house tequila for the foreseeable future,” he says. “My favorite is the oldest fashioned. It’s still tequila – Patrón Extra Añejo, in fact – but it has all the characteristics of a good, barrel-aged bourbon.”

The menu is also dominated by dishes that happened to be among Bahena’s personal favorites. “Honestly, the menu is comprised of all Juan’s favorite foods,” jokes Phillip Price, a veteran of the local hospitality scene and who Bahena tapped to serve as Tula’s manager.

“The menu is fresh. Everything is made in house with fresh ingredients, made to a level that I have truly never seen before,” he adds.

Bahena and the Tula team had a little help when it came to set that culinary standard. Tula’s first menu, as well as it’s soon-to-be released spring and summer menus, were crafted with the help of head chef Geno Bahena. And no, he’s not related to Juan.

Chef Geno Bahena is an acclaimed chef from Juan’s native Chicago. The two were connected by chance. 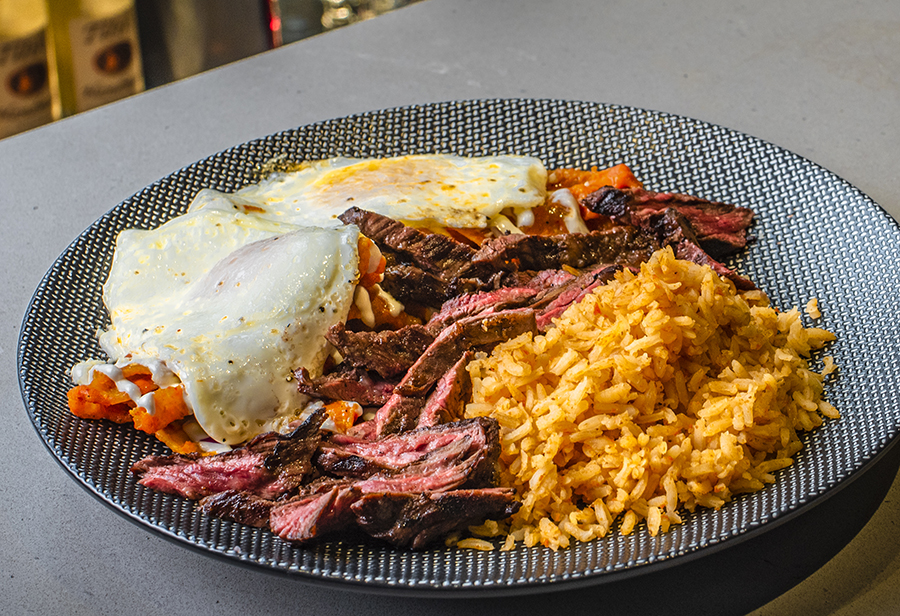 “My mother-in-law buys tamales from a lady in Rogers on the weekends,” Bahena says. “They were talking about how I was opening this restaurant, and the lady told her that her nephew was a chef, that I should reach out.

“I immediately wrote it off. Either my mother-in-law was exaggerating, or this guy wasn’t a legitimate chef. I said, ‘Okay, we’re not there yet, maybe later.’ Time goes by, and I learn that this chef’s last name is also Bahena, which is not exactly a common name, so I was intrigued. I Googled him — ‘Chef Geno Bahena.’ And he was not a line cook. This guy worked for 12 years for Rick Bayless who is one of the best chefs in Chicago. I remembered Rick Bayless from having watched him on PBS every Saturday morning when I was a kid. I was like, ‘Okay, now I’m excited.’”

Juan called Geno, and they hit it off immediately. 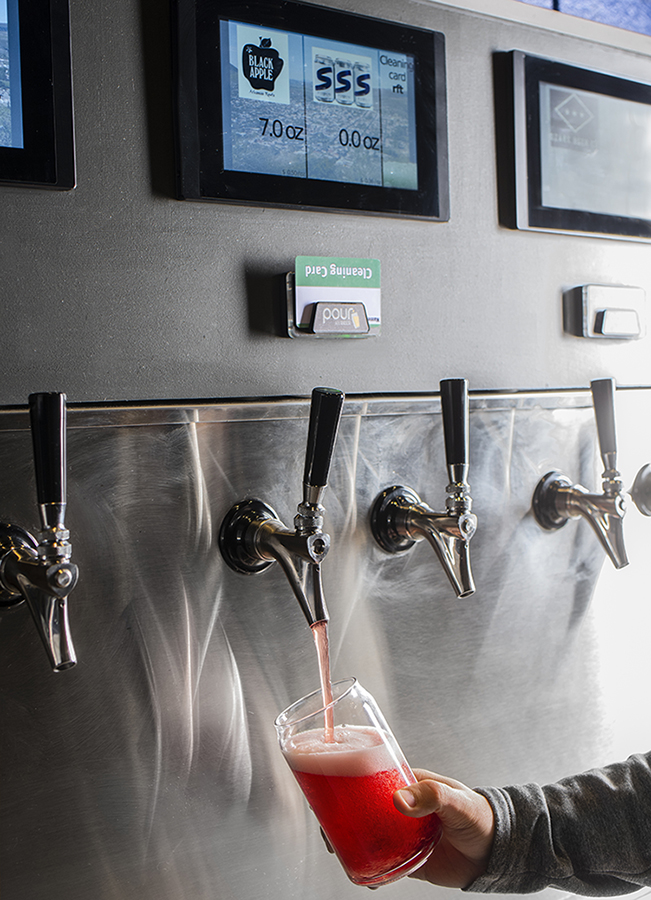 Price offers a fun fact to guests who grab a cocktail from Tula’s bar before they’re seated: “Tequila is the only spirit that is an upper. Every spirit, and including beer and wine, is a downer. Don’t quote me on this, but something in blue agave is a literal mood enhancer.”

“Before he even came here, he was instrumental in helping figure this whole thing out,” Juan says. “He gave us ideas regarding the psychological aspects of a restaurant, making guests feel special. I picked his brain, asked him if he’d be willing to come here. At the time, he was on contract with a restaurant in Austin, Texas, that ran through the end of last year. We were planning to open last September but ended up not opening until January so it all just fell into place. It was meant to be.”

Before coming to Fayetteville, Chef Geno Bahena had built a reputation across the country, opening lauded Mexican restaurants. He’d also worked for a time as a chef in President Barack Obama’s White House.

Chef Bahena is responsible for the house-made tortillas made with an age old family recipe. The smell, when pumped out to the town square, acts like a tractor beam to anyone moderately hungry.

But don’t come to Tula and expect a Steven’s Special. “I’m trying to be as authentic as I can to Mexican food,” says Bahena. “There are certain things that are hard to copy, but we try. We bring in a lot of ingredients straight from Mexico.”

You won’t find Arkansas cheese dip there, either. Instead, Tula serves queso fundido, a Chihuahua cheese topped with pork chorizo, roasted poblano pepper and oregano — something you would actually find in Mexico.

“We trained our servers, educated them on what is Mexican food. We wanted them to be able to tell the stories of the food we serve our customers. We want you to try something you’ve never had before. It’s okay if you can’t pronounce the name of the dish, but trust us,” Bahena jokes.

“When you look at the menu, you’ll see that most of the things on it take a lot of time to make,” says Bahena. “The mole, for example … has about 33 ingredients.”

And because of the time and complexity in making each dish, many of the entrées on Tula’s menu are traditionally reserved for special occasions in Mexico. “That’s because so much goes into making them,” Bahena says. “When I think of mole, I think of Christmas Eve, eating it with my family. It takes all day to make — you wake up in the morning to the smell of your grandmother roasting peppers. And they’re in the kitchen working on it all day, and that makes it so much better because of that anticipation for a great meal.”

“Think about Thanksgiving, everyone anxiously waiting for a great meal that your loved ones are in the kitchen working,” he adds. “We’re trying to bring that level of joy and excitement to each dish.”

For Bahena, every meal is a celebration. “And why shouldn’t it be? It doesn’t have to be someone’s birthday to celebrate; there’s something to celebrate every day. I celebrate another day to be alive. So, I look at the menu through that lens. Everything should be worthy of celebration, and I want every meal at Tula to feel that way.”

The mole, Bahena says, feels like Christmas Eve in the dining room, surrounded by family. The carne asada feels like a cookout on the Fourth of July, surrounded by friends. “That’s what I want for this restaurant,” he says. “I want everyone to come here and feel that, too, surrounded by people they love, having a good time, a good drink and a great meal.”

Food isn’t just food. It’s community. And in the case of Tula, it’s two communities. One is thousands of miles away, but determines the smell, taste and atmosphere of Bahena’s restaurant. The other is the community that has supported Bahena and his restaurant on the historic Fayetteville square.

“It always goes back to the name — Unión de Tula,” he says. “The town was formed when a group of people came together to support one another. Fayetteville has done the same for us, coming together, supporting us and backing us up. The people here have made me feel at home ever since I moved here from Chicago. The city of Fayetteville has helped make this place more than food or atmosphere — it’s the people.”

“I love Fayetteville,” he adds. “Fayetteville has become home, and I’ve watched a lot of restaurants decide to go to Rogers and Bentonville. People think that Fayetteville is just a college town. And a lot of the advice from those in the restaurant industry was that I had to make this place as cheap as possible to cater to the students. Well, that’s not the case.

“If the quality is there, they’ll come. This is not something you’re going to get anywhere else. Love is put into these dishes.”