by Joe David Rice | Photography by Jamison Mosley
Like many of you, I can vividly recall memorable scenes from travels over the years through the Arkansas Ozarks. Highlights on my list would include Whitaker Point on a perfect fall afternoon, the shops in downtown Eureka Springs during Christmas and a low-hanging fog layered over the Buffalo River valley on a crisp spring morning.
Along those same lines, I can fondly remember several distinctive sounds from Northwest Arkansas, such as the slap of a beaver’s tail on the Kings River, tens of thousands of rabid fans calling the Hogs at Razorback Stadium in Fayetteville and the caroling of lions on a summer evening in Carroll County.
Yep, that’s right. The king of beasts does indeed carol at Turpentine Creek Wildlife Refuge near Eureka Springs. For those unfamiliar with this unique vocalization, it’s a way male lions (and females too, on occasion) communicate with others of their species. Using their diaphragms to maximize the sound allows the lions to generate an incredibly powerful noise. Just how extraordinary is this roar, you ask? It’s among the loudest “natural” sounds in the state, with the deep, thunderous growls clearly heard from four to five miles away. Up close and personal, it’ll cause the hairs on your neck to bolt upright, a not-so-subtle reminder of our place in the food chain.
Turpentine Creek Wildlife Refuge is one of the most fascinating and unexpected treasures to be found within Arkansas’ 53,180 square miles. Located on scenic Highway 23 seven miles south of Eureka Springs, it’s been in operation for over a quarter of a century now, founded by Hilda Jackson and her family in 1992. 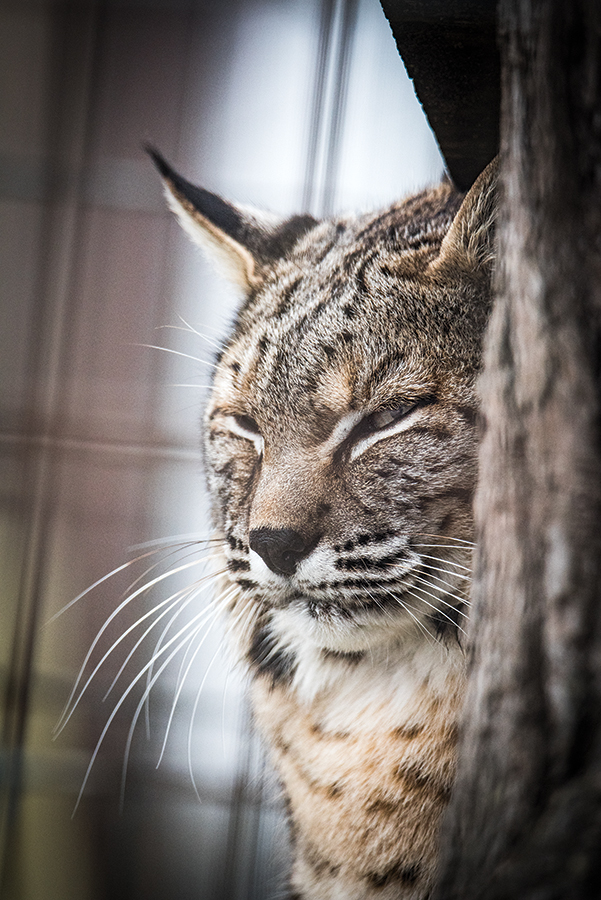 A rescued bobcat rests its eyes inside an expansive enclosure at the Turpentine Creek Wildlife Refuge.

The Jacksons rescued their first exotic animal, an African lion cub named Bum, in 1978 while living in Texas. Four years later, they brought Sheila, an adult female lion, into the family fold when the cat’s owners feared for the safety of their six-month-old baby. Then, in 1991, they took on an enormous responsibility: the care and feeding of 14 distressed lions, tigers and cougars owned by a woman in Hope.
That decision led to the establishment of Turpentine Creek Wildlife Refuge on a 459-acre tract in the heart of the Ozarks. Today the refuge provides a safe and secure home for approximately 100 animals – over 60 large felines, 11 black bears, one grizzly and a collection of smaller mammals. It’s one of the largest such facilities open to the public in the world. Attesting to the high operating standards of the refuge is the fact that it earned accreditation from the Global Federation of Animal Sanctuaries in 2017.
Providing care for this massive menagerie is no easy task. All cages and habitat areas are cleaned daily, and water bowls are cleaned and refilled at least three times a day. The animals are fed each day according to their dietary needs. Given that most of them are predators, the refuge requires a lot of raw meat, serving, on average, 1,000 pounds a day – or about 180 tons over the course of a year. Tyson, one of northwest Arkansas’ leading corporations, provides valuable support by donating much of the refuge’s food requirements.
A permanent staff of seven biologists/zoologists, along with 15-18 college interns (working six-month shifts), care for the animals. In 2016, the refuge opened its Jackson Memorial Veterinary Hospital, an on-site, state-of-the-art facility complete with the space and specialized equipment necessary to operate on such outsized patients as a 420-pound lion. 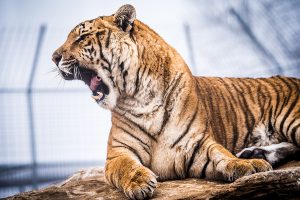 One of Turpentine Creek’s many beautiful tigers yawns atop a rock on the 459-acre tract of land in the heart of the Ozarks.

Visitors expecting a collection of cramped cages are amazed and impressed by the animals’ expansive enclosures. The 58 naturally enhanced habitats, ranging in size from 5,000 to 20,000 square feet, give the large carnivores plenty of room to roam. Each habitat – which can accommodate one to four animals – includes natural grasses, trees, undergrowth, toys, access to shade and cement night houses.
Tending to the needs of its residents is only one part of Turpentine Creek’s mission. The staff also offers a variety of educational programs, ranging from tours for school groups to working with ESPN to air segments about the refuge. A chief concern of the organization is helping its visitors understand the complex problems associated with importing, breeding and selling exotic animals.
In its role as a USDA-certified rescue organization, Turpentine Creek isn’t a petting zoo or a breeding operation. It takes in victims of the exotic animal trade, fully committed to making sure these unfortunate creatures can live out the remainder of their lives in peace and dignity. For some who’d been confined to concrete-floored cages, Turpentine Creek has given them their first chance to walk across grass under open skies.
In late 2016 and under the leadership of Tanya Smith, Don and Hilda Jackson’s daughter, the Turpentine Creek team took on a herculean task: rescuing dozens of animals from a poorly managed wildlife center in Colorado. Working with the Tigers in America organization, the staff relocated 32 lions, tigers and cougars to the refuge in Eureka Springs and placed another 83 animals in accredited sanctuaries across the country. Many of the rehomed felines had major health issues, to include three white tiger cubs who were unable to walk due to a metabolic bone disease. With attentive care and a customized diet, this trio of youngsters is now running, playing and wrestling in their spacious enclosure at Turpentine Creek. 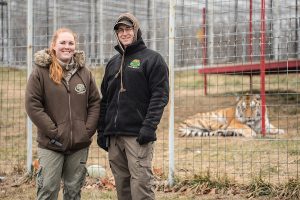 Turpentine Creek employs a permanent staff of seven biologists and zoologists that take care of the refuge’s 100 animals.

Now, back to lions and their caroling – something that truly must be heard to be believed. While daytime visitors might get lucky and experience it, the best opportunities are at dusk and during the evening hours, when lions are more typically active. The good news is that Turpentine Creek has attractive overnight accommodations – featured on The Travel Channel’s “Hotel Impossible” – for those wanting to enjoy an auditory taste of Africa much closer to home:

Turpentine Creek Wildlife Refuge is open year-round (except Christmas Day) from 9 a.m. through 5 p.m. (6 p.m. during the summer) with a selection of tours, both walking and via trolley. In addition, the staff offers a “Carnivore Caravan” option, giving guests a “behind the scenes” look at the compound and a personal “Coffee with the Curator” experience, which allows visitors to gain an inside perspective of the refuge’s operations. Also, serious photographers should consider making advance arrangements for a special “behind the rails” guided photo shoot. Not to be overlooked is the well-stocked gift shop.
Check out the Turpentine Creek Wildlife Refuge website – turpentinecreek.org – for more details. And add this delightful destination to your Arkansas bucket list.