TV Scientist Kevin Delaney is Ready for His Next Move 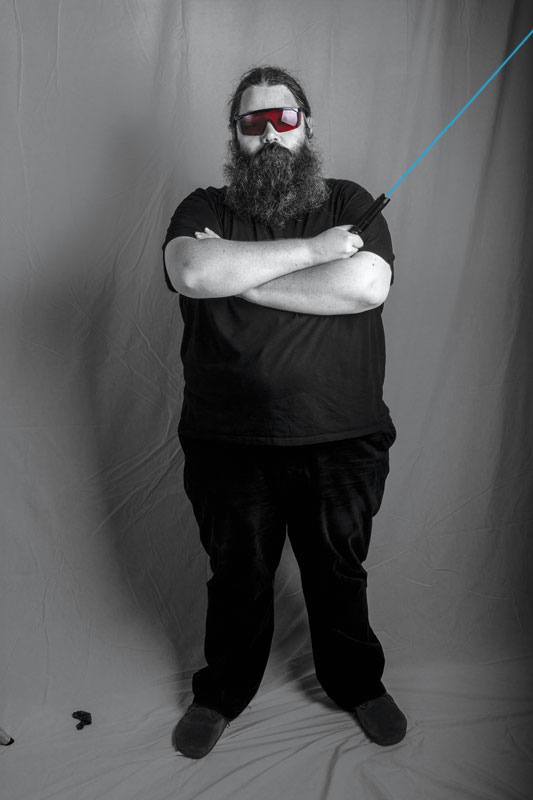 Kevin Delaney isn’t sure he considers himself a scientist — but saying he plays one on TV oversimplifies things considerably.

[dropcap]D[/dropcap]elaney is in the business of science communication. He has appeared on The Tonight Show Starring Jimmy Fallon and at the center of his own show, Street Science, on the Science Channel, which just wrapped up for the season.

“There’s a question of what the definition of a scientist really is, like whether it’s a person who uses the scientific method or process to kind of learn new information and discover new stuff. Certainly everyone is a scientist in that aspect,” says Delaney, who recently resigned from his position as director of visitor experience with the Arkansas Museum of Discovery to pursue other opportunities.

“Science is all around us and I want the world to see, so I’m combining everyday elements in ways that will blow your mind,” Delaney booms in the introduction to each episode of Street Science. “I’ve got a team of experts and high-tech cameras that will reveal the science that surrounds us in ways you have never seen before. I’m taking science to the streets.” 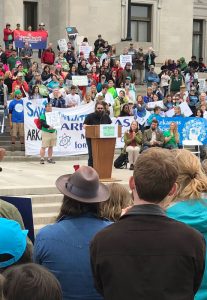 Kevin Delaney speaks at the Little Rock March for Science in April.

Viewers are warned not to try these experiments at home, and with good reason. Delaney works with a team of scientists on his experiments, and some of them are downright explosive. In one episode he and his sidekick Darren Dyk visit a salon and use hydrogen peroxide and potassium iodide to demonstrate exothermic reactions — which sounds less than exciting on paper, but which translates into a dramatic event involving foam that shoots like lava into the sky from the doors and roof of a Volkswagen Beetle occupied by mannequins adorned with beards just like Delaney’s and Dyk’s.

“I pitch a few ideas, but the final decisions are made by the producers,” Delaney says of how experiments are chosen for each episode. “It’s their show. I’m just the host. We have a talented group of artists, photographers, engineers and chemists who help put it all together. The crew is great. It’s definitely a team effort.”

Street Science was filmed in Tampa, so he traveled around there with the team for much of the season.

“We even went north of Walt Disney World to fire off rockets with my good friend (and Little Rock native) Myron Fletcher, an actual rocket scientist,” says Delaney. “I’ve also traveled quite a bit to science fairs and STEM (STEM + Art) events all over the country. While visiting lots of places and meeting new people is fun, I’m always happy to come back home.”

Delaney took the requisite science classes in college, and his interest in the subject has been fostered by an uncle who is a palynologist — he studies pollen — and a brother who is a marine biologist. But he didn’t set out to find a career in the science field himself. He majored in performance and writing.

He worked for a time as a playwright, writing teacher and actor in Rhode Island, and then he got a job working in the education department at the Roger Williams Park Zoo in Providence.

“I was part of a team that would work with the zookeepers and the education staff on presentations to give around the zoo about anything from narrating animal feeding times to adapting stories for performance and puppet shows about ecology and conservation and all that kind of stuff,” he says. “That’s kind of what got my foot in the door with science education and using art and performance to teach science and to inspire people to study science and get excited about it. I was working alongside scientists and educators and performers and artists and musicians. That’s kind of what science communication really is.”

Delaney, who grew up in New Jersey, met his wife while he was in college and they moved to Arkansas about five years ago to be close to her family. He was working at the Museum of Discovery when Mensa members designated it no. 6 out of the top 10 best science museums in the country. That caught the attention of Tonight Show staff, who asked him to do a test run on their show. He has had recurring appearances since then.

“He just has a natural joy,” Delaney says of Fallon. “He’s just really excited by that stuff. It’s really authentic. But he has an idea what we were going to be doing before we do it.”

From there, of course, he landed on the Science Channel, where, at least so far, the powers that be have not turned down any of his experiment ideas. Delaney’s dry sense of humor is on display during every show, so it’s not surprising that his reserved demeanor would make it unnatural for him to admit that this is any sort of dream job.

So, what comes next for Delaney? It’s not clear yet whether Street Science has been renewed for another season.

He will make an appearance at the Arkansas Science Festival at Arkansas State University in Jonesboro in October and he has been traveling around the country to do science demonstrations and to speak about science.

“It’s a lot of fun. I get to meet all kinds of people, some of whom are scientists and some who want to learn about science,” he says of his experiences on Street Science and beyond.

There is more in the works, but he can’t talk about his next steps just yet, although he does allude to it being something to do with television.

Delaney recently got a chance to go back to Providence to perform with the Manton Avenue Project, a kids’ playwriting organization he worked with for several years.

“It’s something I miss very much and hope to do again soon,” he says. “I haven’t gotten to do it much in Arkansas.”