Two decades into its run, James at the Mill still serves some of the most amazing fine food in Arkansas.

[pullquote]Above Photo: Faye’s Warm Banana Cake, made from a recipe James learned from his grandmother.[/pullquote] [dropcap]Here’s[/dropcap] the conundrum restaurateurs face: Change is the only constant, but your regulars often crave familiarity.

Chef Miles James, owner of James at the Mill in the tiny northwest Arkansas town of Johnson, has trod that tightrope since 1994 when he opened the restaurant next door to the Inn at the Mill, which his father-in-law had established three years earlier.

“Look at this view right there,” Miles said, gesturing out the private dining room window toward the 1835 Johnson Mill just down the hill. “That’s fun to come to work to every day.”

Once he’s at work, the patrons who walk through the door, hungry and with high expectations, keep him on his toes.

“Having the opportunity to design, build, own and operate [the place] where I’m happiest, that’s what keeps me excited,” he said. “Our staff is a major contributing factor to our success and my happiness. Without the dedicated, talented and extremely loyal staff we’ve had over 20 years, it wouldn’t have happened. It’s just the right place, right time.” 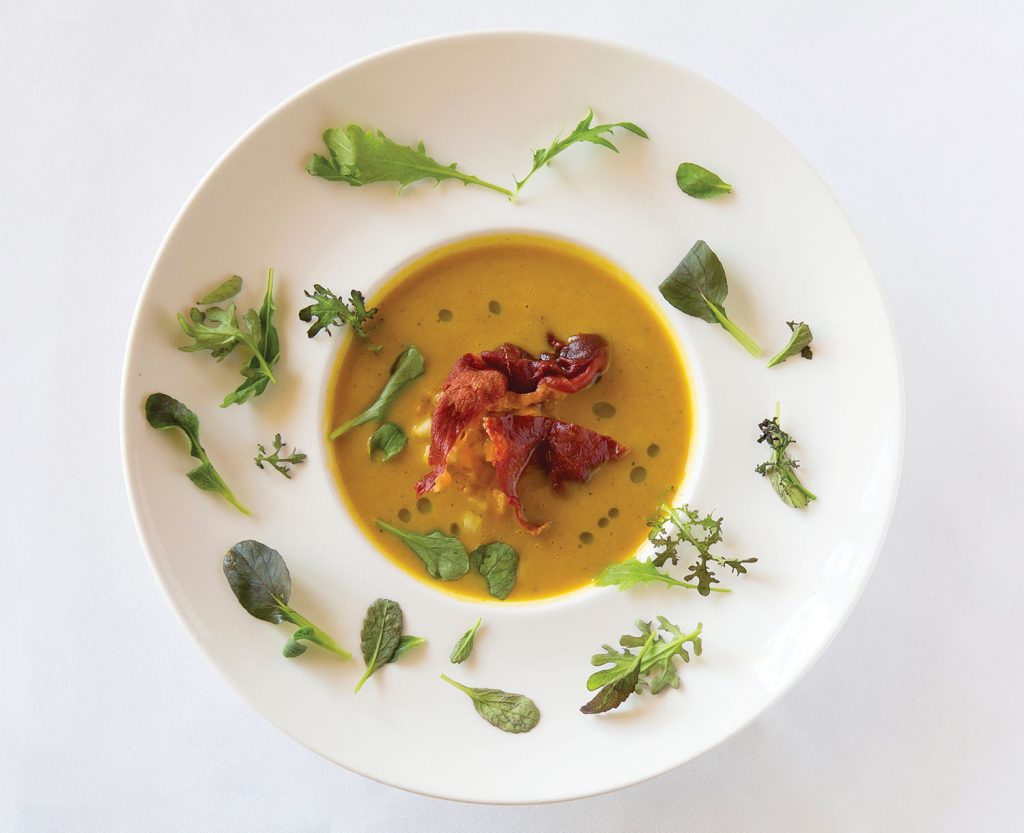 Now that he’s serving second- and even third-generation diners, James still believes his out-of-the-way restaurant is the perfect place for the kind of food he likes to serve, even after trying his hand at ventures in bigger markets over the years.

“There’s plenty of opportunity in northwest Arkansas for the type of volume growth that towns like Miami, Los Angeles, and New York have. I see now, after trying to do something elsewhere and coming back, the reality that we have all we need right here. It’s an exciting place — great vendors; great possibilities for food; local, fresh, clean products that are a lot of fun to work with. It’s home,” he said, smiling. “It’s a great place. I love it.”

One of the challenges for the chef at a white tablecloth restaurant is to present simple dishes, if only because it’s too easy for people to mistake “simple” for “boring.” A bowl of the roasted butternut squash soup from James at the Mill, however, will dismiss any such thoughts.

This appetizer comes with an apple relish and crispy San-Danielle prosciutto bits, but do yourself a favor and taste the soup by itself first, then with some of the apple, then with the prosciutto. Notice how both the flavors and the textures build, layer upon layer. The saltiness of the prosciutto may even seem out of place until it has had a moment on your palate, at which point the genuine artistry of the combination can truly be appreciated. 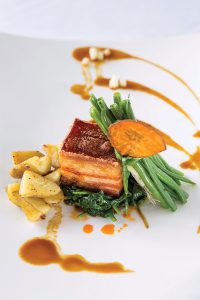 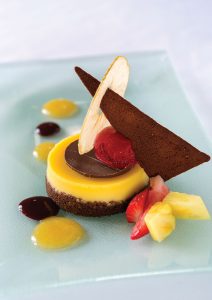 Of course there’s something to be said for complexity, too, and their lump blue crab cakes are an excellent example. Combining the crab with tomatillo salsa verde, ancho chipotle aioli and frisse salad with pickled red onion and sliced almonds, all drizzled with truffle vinaigrette, gives your taste buds quite the workout. The salsa and the aioli are both spicy, but the former is bright and tangy while the latter is creamy smooth. The crab cake itself is fluffy rather than dense, and the salad is floral in its colors, crisp in texture and just a touch bitter. Every bite of this dish is a different flavor combination, all of them delicious.

The entrees presented by James were a grand tour of both the seasonal menu and the five-course tasting menu from one of the restaurant’s wine dinners, which they offer monthly.

The two beef dishes couldn’t be more different. A short rib was cooked in a whole-grain mustard glaze and served with tomato jam on homemade potato gnocchi. It was extremely tender and had a strong kick from the spice rub, leaving your tongue pleasantly warm. The gnocchi were dense and pillowy, soothing the spicy heat. It’s a delicious dish, but one any diner might find comfortably familiar.

Then there’s the Cuban-style, chicken-fried filet of beef, and if your eyebrows haven’t just shot up you need to re-read the first part of this sentence. This was the surprise dish of the night. It’s a great re-imagination of a classic cut of beef, pounded, breaded, pan fried and served alongside cilantro rice and black beans with a lime aioli, red peppers and scallions. It’s reminiscent of the Mexican food you first experienced as a kid, but elevates those flavors in a way that makes you appreciate grown-up tastes.

From the tasting menu — and let’s be blunt, the full-size portions aren’t about “tasting,” they’re about “indulging” — the braised pork belly was positively sculptural: a cube of pork, with its striations of lean and fat, served on greens with a bundle of haricot vert and roasted fingerling potatoes. 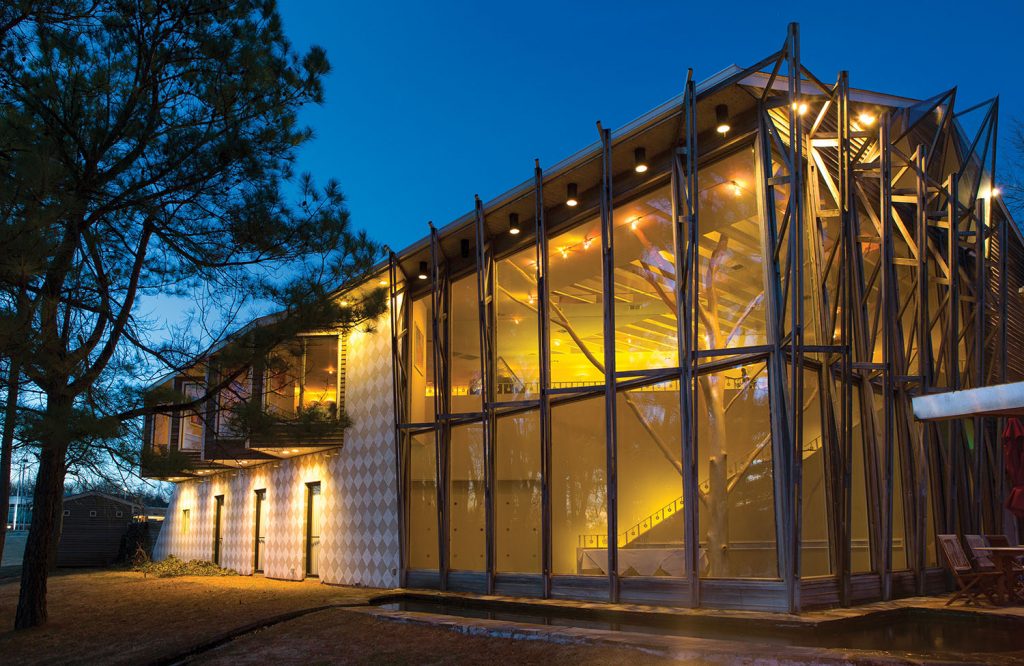 The restaurant’s expansive windows afford views of the historic mill next door.

Tucked into the dessert listing is something Miles has been cooking since he first stepped into a kitchen: Faye’s Warm Banana Cake, named for his grandmother Faye Linam at whose side young Miles started cooking during visits to her home in Texas.

“She was always cooking, and she showed me how to make it,” James said. “We pair it with malt ice cream and pecans on top, a little clear caramel sauce and some plantain chips. But the cake is the same, other than the shape.”

One bite and it’s clear why the recipe hasn’t been fiddled with much. It may look post-modern on the plate, but it tastes of a grandmother’s love.

As the name and the face of one of the state’s signature restaurants for 20 years, James still isn’t afraid of change. For example, his latest project is MJ Pizzeria in Springdale. The restaurant will open next month with a menu of wood-oven pizzas, homemade pasta, “awesome, organic, big salads” and homemade desserts. Yet as he starts his third decade at James at the Mill, he’ll continue to offer tradition in the same manner he always has with a seasonal menu of inspiring dishes that will constantly challenge his guests’ palates, but never disappoint their expectations.